In a report today, Bloomberg claims that Apple is set to overhaul iTunes by the end of the year by more closely integrating iCloud support and adding improved sharing features. Bloomberg is light on exactly what deeper iCloud support will entail, focusing instead on the fact that Apple wants to make it easier for users to manage and organise all their libraries of music, videos and applications. It’s also insinuated that Apple may yet carve more features out of iTunes and into separate apps, like the new Podcasts app that Apple released earlier this week.

The other half of this overhaul relates to how users find new content on the multitude of content stores that Apple runs. According to Bloomberg’s sources, this will entail making it easier to share songs and even allowing “users to listen to a song sent to them from a friend for free”. A big part of the improved sharing will no doubt be the baked in Twitter and Facebook sharing options that Apple showed off in their iOS 6 preview at WWDC. The new sharing features are also likely to replace Ping, which according to a report by John Paczkowski of AllThingsD earlier this month, is set to be removed from the next major version of iTunes.

Bloomberg refutes suggestions that Apple will offer a music subscription service like rdio or Spotify, but notes that music labels have been urging Apple to do so.

Ping To Be Removed From Next “Major Release” Of iTunes

According to John Paczkowski at AllThingsD, Apple’s social network for music, Ping, will be removed from the next major release of iTunes, likely coming this Fall. According to his sources, it will be replaced by integration with Twitter and Facebook, both to be supported in the next versions of iOS and OS X at a system level.

Sources close to the company say that Ping, which still exists today in iTunes 10.6.3, will be gone with the software’s next major release, likely scheduled for this fall. And at that point Apple’s social networking offerings will shift to Twitter and new partner Facebook entirely.

At the D10 conference last month, Apple CEO Tim Cook said “the customers voted and said they didn’t want to put a lot of energy into Ping”. Two years ago, NPR called Ping “one of the worst ideas” of 2010.

Announced yesterday but not enabled until a few hours ago, the iPod app on iOS 4.3 got two new features: you can now “like” songs and “post” them to Ping directly from the iPod app on iOS 4.3. We’re not sure right now whether this feature only works with tracks and albums purchased from the iTunes Store or music that matches the exact information stored in iTunes servers (try it with your Amazon MP3s, and let us know if it works), but as it stands now Apple has definitely updated the iPod app remotely to integrate the Ping functionality. It wasn’t there yesterday, and there it is now (see screenshots). 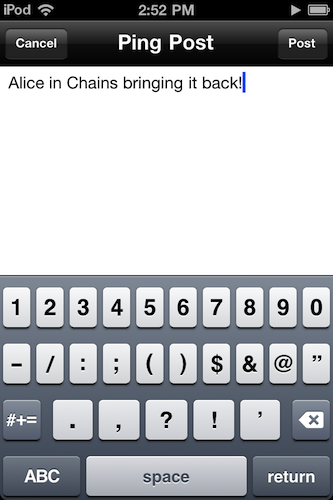 Update: it looks like the Ping buttons only appear in tracks purchased from the iTunes Store. 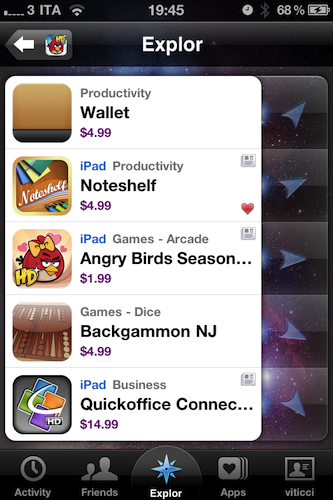 I’ve never been a loyal user of “app discovery” tools for iOS: I’m talking about those apps that help you find out about new apps and share the results with your friends. Sort of meta, I know, but apparently there’s a huge market for these things now that the iOS App Store has crossed the mark of 300,000 apps available for the iPhone. In the sea of applications that’s inundating our inboxes, it seems like there’s plenty of room for alternatives to the default App Store app.

Explor, a free app by Hello,Chair released today, is the latest (and possibly greatest) addition to iOS software discovery panorama that comes with interesting features I haven’t seen anywhere else. END_OF_DOCUMENT_TOKEN_TO_BE_REPLACED

Last week, I noticed Apple started sending me emails about people following me on Ping. Yes, Ping: remember it? Apple’s “interesting” attempt at doing social networking within the iTunes Store. Something that has received awards like worst product of 2010. Still, back to email notifications. It looks like Apple turned these on by default recently, without asking for user’s confirmation, apparently. Another little trick to remind us Ping exists, I guess. Indeed, the Ping homepage features these new notifications as “What’s New In Ping”. END_OF_DOCUMENT_TOKEN_TO_BE_REPLACED 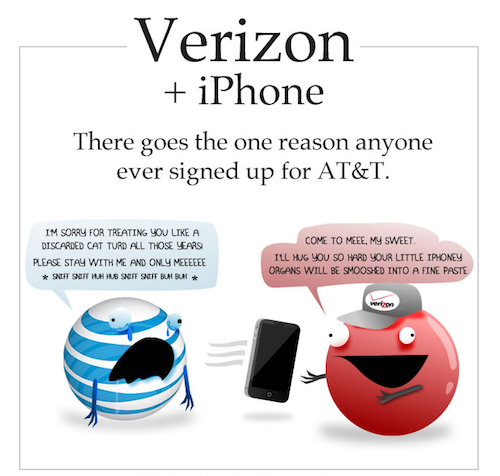 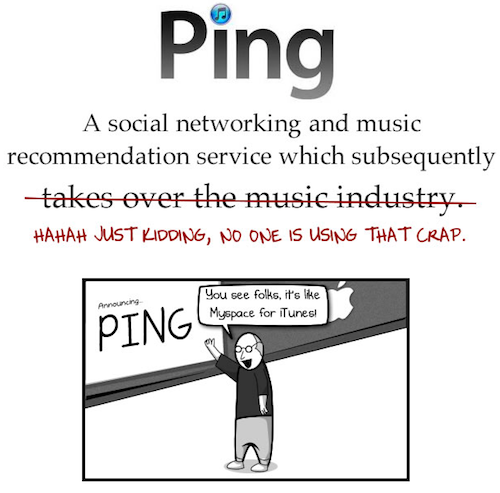 Next up: The Oatmeal on the white iPhone? 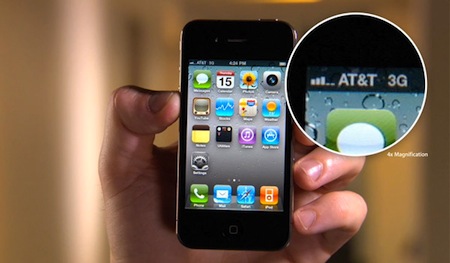 It was June, summer was about to start, we just bought our shiny new iPhone 4s…and the Internet went crazy about what eventually got the name of “Antennagate”. You remember this story. The “weak spot” of the iPhone 4 which, due to a new antenna design, can make the device lose signal when you’re holding it in a specific way. Again, this is not something we’re going to forget easily. Perhaps one day we’ll tell our grandkids “I was there”. Whatever.

Still, CNN thought it was time to bring the whole Antennagate thing to the surface again and name it the biggest tech fail of 2010. We tried to bury Cupertino’s most favorite scandal deep down in our minds; CNN makes it clear that 2010 in tech was all about Antennagate:

First Apple said the problem didn’t exist. Then they said it was a software issue. Then they kind-of admitted it existed and gave away free cases to help. Then, they said it doesn’t really exist anymore and stopped giving away the bumpers. Months later, the problem is all but forgotten and the phones show no sign of dipping in popularity. So “fail,” in this case, is a pretty relative term.

Antennagate is not alone in the chart, though. 3D TVs made the list as well (seriously, I haven’t seen one or heard of a single friend of mine who bought / considered buying one) together with the Nexus One, the Microsoft Kin, Facebook’s privacy issues and the Gawker media security breach. Looking back, it looks like we had a great 2010 full of interesting tech stories and theories.

There’s only one sad point: Ping is, again, listed as one of the fails of 2o10. I feel bad for Ping: no one likes it. It just needs…a little bit of everything.

In spite of Apple’s numerous attempts to inject new features and 3rd party online integrations in it, Ping is struggling to take off. Not only does the service seem useless and too tied to iTunes to many, several publications are also calling it one of the biggest flops of 2010.

You can now add NPR to the list of Ping non-fans, as they have named Apple’s social network for music one of the “worst ideas of 2010”. Ouch.

The most popular services — the Facebooks, Twitters and MySpaces of the world — allow users to share links, thoughts, ideas, photos and music to connect with each other. Ping, run through iTunes, was supposed to be an evolution in musical connection. But iTunes, being a self-contained fortress requiring endless software upgrades and with more than a few frustrating quirks, isn’t conducive to the type of sharing Web-based networks enjoy across a variety of devices. I can access all three of the aforementioned sites from my Android phone, and I have a variety of apps that allow me to seamlessly integrate these applications into my life. To use Ping, I would have to be tethered to my iMac.

NPR also notes that Ping is a “weakened” version of Twitter only meant to drive sales to the iTunes Store. Looking at artists’ profiles and the messages they share on Ping, it’s not difficult to understand NPR’s position. Perhaps their hammer went down a little too hard on Apple’s new service, though? Sure Ping is not a massive hit, but it has room to grow.

As it stands right now, Apple wants its users to believe in Ping. The problem is, people sometimes don’t want to wait for things to get better. Here’s to hoping Ping will get insanely better in 2011. 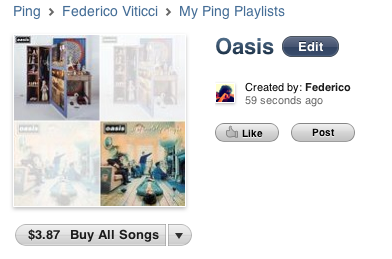 Last week, Apple launched a new feature for Ping users: social playlists. As the name suggests, a social playlist allows you to group two or more songs together and share the playlist with your friends (followers) on Ping.

It’s a very simple and effective concept, but the menu to get started with it is somehow buried into Ping’s homepage. Here’s how you can create your first social playlists. END_OF_DOCUMENT_TOKEN_TO_BE_REPLACED