Serenity Caldwell and Jason Snell, writing for iMore, have already put together a transcript of Apple’s Q4 2015 earnings call. This is where you want to go to get all the details shared by Tim Cook and CFO Luca Maestri earlier today, such as this tidbit on the iPhone Upgrade Program:

Rod: On the Upgrade Program, can you envision a time ever, maybe in the U.S. or elsewhere, where you would not have to come into an Apple Store to take advantage of the upgrade? You might be able to do that somewhere else?

Tim: That’s a really good question. We actually solved that problem back in 2007, but then quickly had to change it in order to scale in a major way. And so that is something that we is always in our mind, that one day from a customer experience point of view, we would like to make things as easy as possible for the customer. And to some degree, you can already do that with buying online. But there are many different plans and so forth that people buy that they have to come in for. Yes, over time we’d love to have that automated, working with our partners with service providers.

Apple has just published their financial results for Q4 2015, which covered the three months from July to September 2015. The company posted revenue of $51.5 billion. The company sold 9.8 million iPads, 48 million iPhones, and 5.7 million Macs, earning a quarterly net profit of $11.1 billion.

“Fiscal 2015 was Apple’s most successful year ever, with revenue growing 28% to nearly $234 billion. This continued success is the result of our commitment to making the best, most innovative products on earth, and it’s a testament to the tremendous execution by our teams,” said Tim Cook, Apple’s CEO. “We are heading into the holidays with our strongest product lineup yet, including iPhone 6s and iPhone 6s Plus, Apple Watch with an expanded lineup of cases and bands, the new iPad Pro and the all-new Apple TV which begins shipping this week.”

END_OF_DOCUMENT_TOKEN_TO_BE_REPLACED

Apple’s Investor Relations website was yesterday updated to note that Apple’s fourth quarter earnings call for fiscal year 2015 (July, August, September) will be held on Tuesday, October 27. As is usual, Apple will provide a live webcast of the conference call.

Apple announced yesterday that it had sold a record 13 million units of the new iPhone 6s and iPhone 6s Plus. The rollout of the new iPhones is on track to be the fastest ever from Apple, and we’ll no doubt hear more about that on this upcoming earnings call.

As we have for previous earnings calls, MacStories will cover the conference call on our site’s homepage on October 27 starting at 2 PM PT, posting charts of the results, collecting key quotes from Apple executives and highlighting interesting Tweets from others.

Apple has published their Q2 2015 financial results for the quarter that ended in March 2015. The company posted revenue of $58 billion. The company sold 12.6 million iPads, 61.2 million iPhones, and 4.6 million Macs, earning a quarterly net profit of $13.6 billion.

“We are thrilled by the continued strength of iPhone, Mac and the App Store, which drove our best March quarter results ever,” said Tim Cook, Apple’s CEO. “We’re seeing a higher rate of people switching to iPhone than we’ve experienced in previous cycles, and we’re off to an exciting start to the June quarter with the launch of Apple Watch.”

END_OF_DOCUMENT_TOKEN_TO_BE_REPLACED 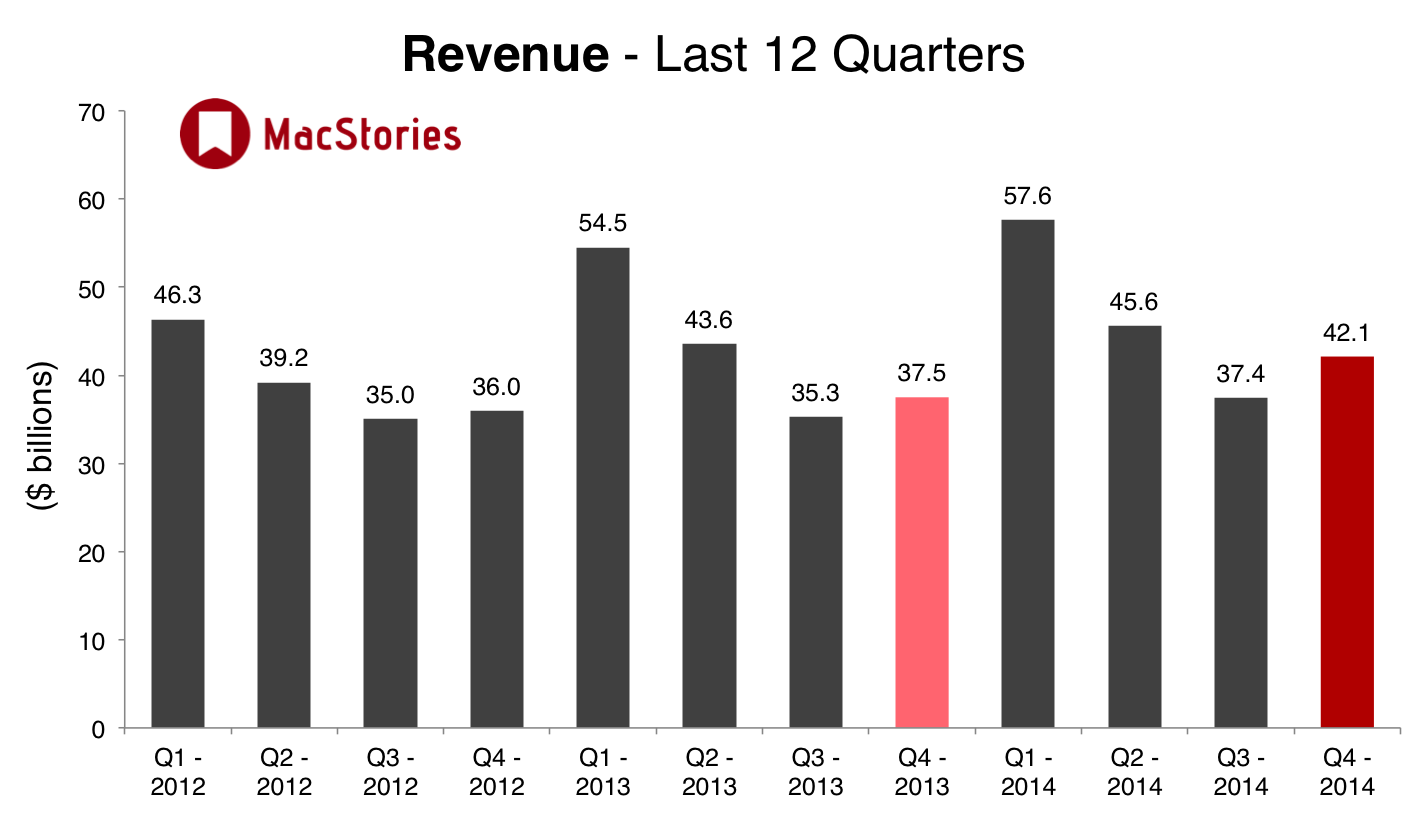 Apple has published their Q4 2014 financial results for the quarter that ended September 27, 2014. The company posted revenue of $42.1 billion. The company sold 12.3 million iPads, 39.3 million iPhones, and 5.5 million Macs, earning a quarterly net profit of $8.5 billion.

“Our fiscal 2014 was one for the record books, including the biggest iPhone launch ever with iPhone 6 and iPhone 6 Plus,” said Tim Cook, Apple’s CEO. “With amazing innovations in our new iPhones, iPads and Macs, as well as iOS 8 and OS X Yosemite, we are heading into the holidays with Apple’s strongest product lineup ever. We are also incredibly excited about Apple Watch and other great products and services in the pipeline for 2015.”

As noted by Bloomberg, starting next year, Apple will create a new ‘Other’ category for their financial results which will combine the sales of the new Apple Watch, iPod, Apple TV, Beats products and other accessories. The move will make it difficult to break out exact sales figures for the Apple Watch and is also different to how Apple treated the iPhone and iPad which from the first quarter received their own category.

“This gives Apple cover for the early months of Apple Watch sales at least,” said Jan Dawson, chief analyst and founder of Jackdaw Research. “If they’re low, the results will be buried with other product sales and hard for analysts to back out. But if they’re good, then Apple can still crow about them and split out results on an ad-hoc basis.” (via Bloomberg)

Notably, Apple’s gross margin was slightly higher at 38%, compared to 37% in the year-ago quarter. International sales also accounted for 60% of all Apple’s revenue. You can see all our usual earnings call charts below.

END_OF_DOCUMENT_TOKEN_TO_BE_REPLACED

In an update to the Investor Relations website, Apple today announced their Q4 2014 earnings call, which will be held on Monday, October 20. As usual, Apple will provide a live webcast of the conference call.

Apple’s Q4 2014 earnings call will likely provide another insight into the launch of the iPhone 6 and iPhone 6 Plus. Released in 10 countries on September 19 and subsequently rolled out in 22 additional countries on September 26, the iPhone 6 line set a new record for Apple by topping 4 million pre-orders in 24 hours and over 10 million units sold in the opening weekend. It’s also possible that the company may share details about iOS 8 adoption numbers (currently at 41%) and the launch of Yosemite, the next version of OS X that graduated to Golden Master status for registered developers today.

We will provide live updates from the conference call on our site’s homepage on October 20 starting at 2 PM PT. 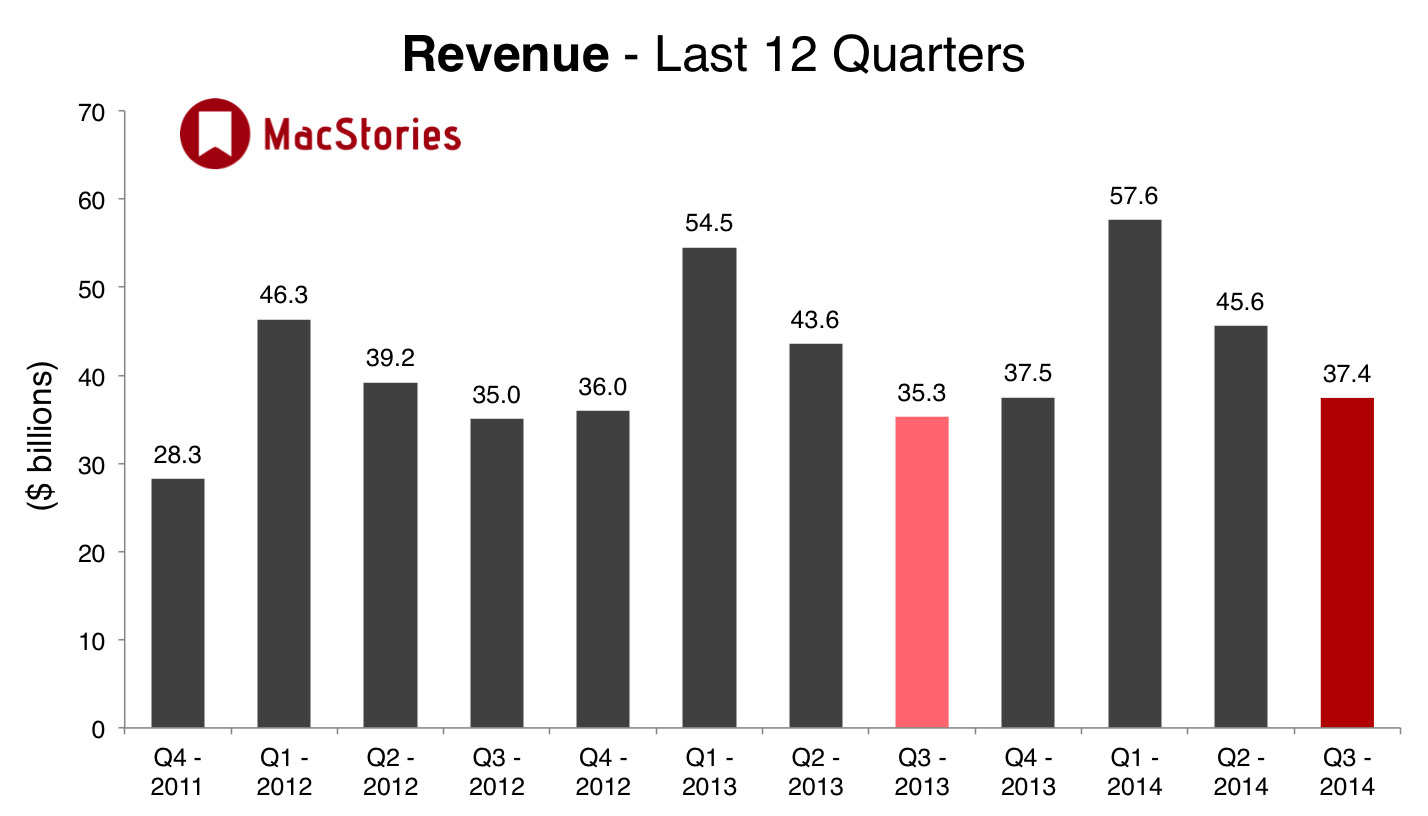 Apple has published their Q3 2014 financial results for the quarter that ended June 28. The company posted revenue of $37.4 billion. The company sold 13.3 million iPads, 35.2 million iPhones, and 4.4 million Macs, earning a quarterly net profit of $6.9 billion.

“Our record June quarter revenue was fueled by strong sales of iPhone and Mac and the continued growth of revenue from the Apple ecosystem, driving our highest EPS growth rate in seven quarters,” said Tim Cook, Apple’s CEO. “We are incredibly excited about the upcoming releases of iOS 8 and OS X Yosemite, as well as other new products and services that we can’t wait to introduce.”

Notably, Apple’s gross margin jumped back up to 39.4% this quarter, compared to 36.9% in the year-ago quarter. International sales also accounted for 59% of all Apple’s revenue. You can see all our usual earnings call charts below.

END_OF_DOCUMENT_TOKEN_TO_BE_REPLACED 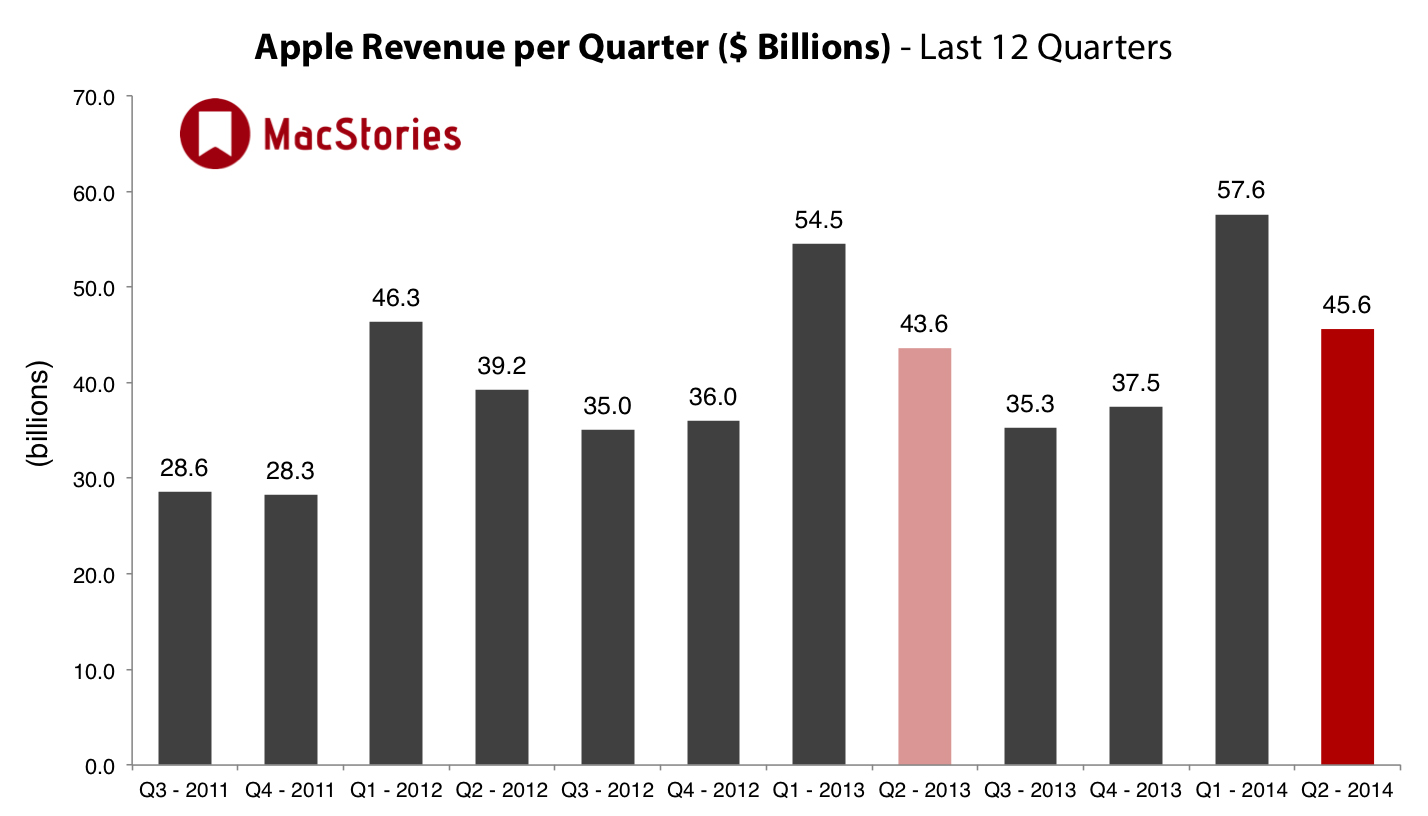 We’ve been a bit busy today with the launch of MacStories 4.0 so we weren’t able to do our usual ‘notes from the call’. But we do have our usual graphs below, so that you can quickly digest this quarter’s earnings results.

END_OF_DOCUMENT_TOKEN_TO_BE_REPLACED 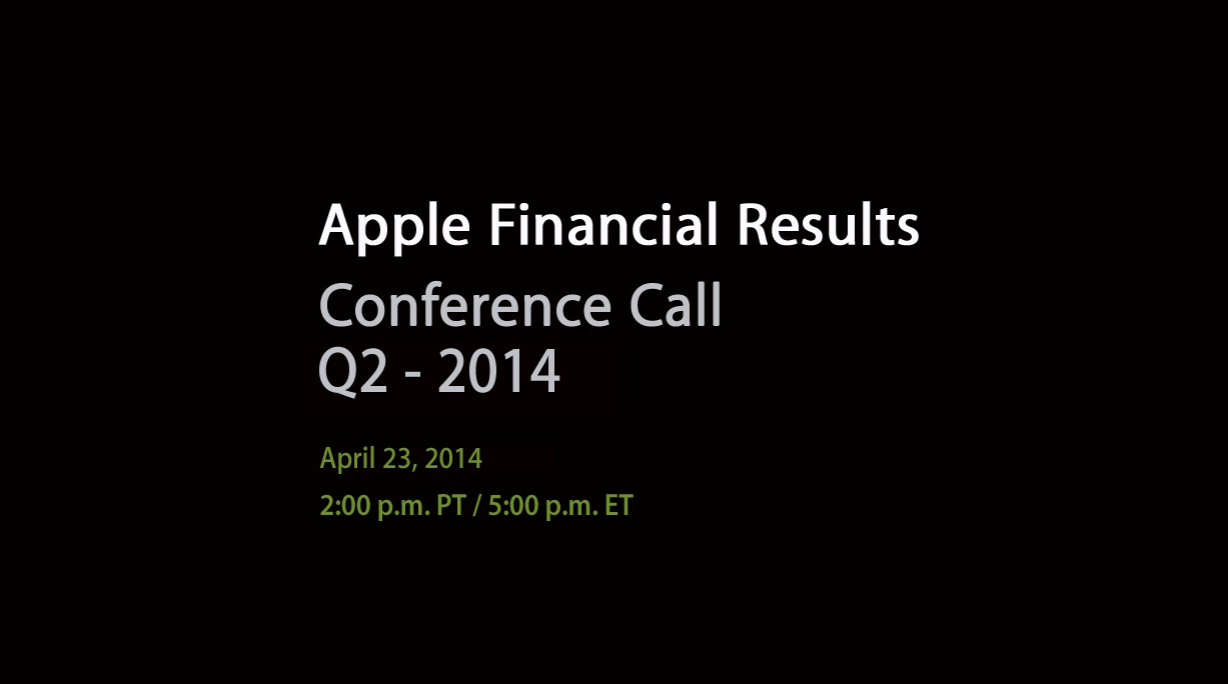 Apple’s second quarter earnings report and conference call will take place on April 23rd, 2014, according to an Investor Relations update on Apple’s website first noted by setteBIT. Apple will provide a live audio webcast of the event.

For Q2 2014, Apple set its guidance at revenue between $42 billion and $44 billion, with gross margin between 37 percent and 38 percent. Apple didn’t release major new products in the second quarter, with the company expected to roll out new entries in the iPhone and iPad lines later this year. The second quarter will provide insight into the company’s post-holiday sales following a record-breaking first quarter; in early March, Apple announced that CFO Peter Oppenheimer will retire at the end of September 2014. During the quarter, Apple launched a cheaper version of the iPhone 5c in selected markets, retired the iPad 2, and relaunched the iPad 4 with a Lightning connector. Apple also released the first major update to iOS 7, iOS 7.1, six months after the OS’ debut.

We will provide live updates from the conference call on our site’s homepage on April 23rd starting at 2 PM PT.