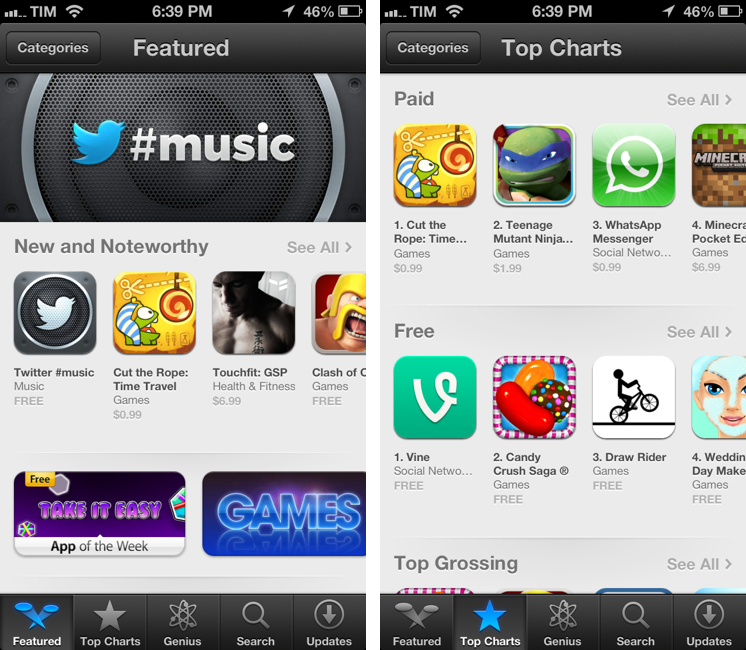 Jean-Louis Gassée has a solid summary of the whole story behind AppGratis’ App Store removal. If you missed it, here’s Apple’s official stance.

I did comment on the topic – six months ago:

Second, we should consider the manipulation of charts. While not specifically mentioned in the new rule, it’s easy to imagine Apple doesn’t want marketing and promotion campaigns to be capable of altering their ranking algorithm for the App Store. Apple has been rumored to dislike these promotion campaigns in the past, tweaking its ranking algorithm to reflect “real” popularity of an app among users. But maybe that’s not enough at this point, and Apple really does want to limit the relevance of this kind of services by, well, enforcing rules that would get them out of the App Store.

This is pure speculation on my side. But I’d consider this: Apple recently revamped the App Store homepage with its own Free App of the Week initiative (alongside a new Editor’s Choice). Would it be a surprise if they thought all these other “free app a day” and “free app download” services could be confusing to the user?

I also added this in regards to “gaming the system”:

But more importantly, rule 2.25 could be enforced for those marketing tools that get users “rewards” for downloading other apps for free — a technique that, consequently, also increases the popularity of the apps that get downloaded as part of the promotion. The problem is that users download those apps only for the rewards — they’re not really interested in them. For this reason, developers could — even slightly — game the system and, to an extent, trick Apple’s algorithm. I don’t see how that can be a good thing.

Apple isn’t wrong to reserve the right to make such decisions. Although insiders may depict the company as obsessive control freaks, “normal” customers seem to appreciate Apple’s efforts to keep the App Store a Clean, Well-Lighted Place.

But maintaining a stony silence when imposing a judgment call is a bad choice, it distances developers, and it inevitably triggers controversy. A few words of explanation would invite respect for having courageously taken a difficult stance.

After talking to several developers today, my understanding is that rule 2.25 has been enforced on some cases, but that it’s not clear how much Apple will enforce it going forward. Apple has notoriously made exceptions in the past: there used to be a rule for apps that “duplicated” existing functionality, but then Apple started approving third-party browsers and, recently, email clients. For all we know right now, it is possible that rule 2.25 will never be seriously enforced and that it’ll slowly “fade away” with time. Or more simply, developers will find ways to work around the rule.

“It’s not clear”, I said. My sources were correct. Here’s John Paczkowski for AllThingsD:

Sources familiar with Apple’s thinking tell AllThingsD that AppGratis’ ouster was a first step in a broader enforcement action generally targeted at app-discovery apps that run afoul of clauses 2.25 and 5.6.

If it has been confusing, it’s because Apple, while being quite clear in citing the rules it is enforcing, has been unclear and scattershot in their actual enforcement.

I don’t know if this BusinessInsider’s report is true. AppGratis CEO Simon Dawlat calls their business model “just regular advertising”; Jason Calacanis says this is “lame on Apple’s part” and that “this is not gaming, this is called forecasting”.

I didn’t link to the AppGratis story previously because, frankly, I thought Apple’s position on the matter had already been amply discussed last year. The way I see it, nothing has changed in regards to how Apple sees third-party apps that mimic the App Store’s appearance while simply linking to other apps. And I thought it was pretty clear that Apple didn’t appreciate developers who kept coming up with advertising models to circumvent the Guidelines and “connect” users with promoted apps in the top Charts. But, apparently, AppGratis’ ouster was publicized enough to make a French minister comment on the matter.

I think that any advertising/promotion system that aims at injecting apps in the App Store’s charts should be thoroughly examined by Apple. They may be based on advertising, “forecasting”, or developer fees – are we sure that, going forward, we want the Top Charts to be systematically dominated by the wealthiest buyer of in-app promotions, rankings, or other solutions that require developers to spend money to get their apps noticed?

It may be called “gaming the system” or “forecasting downloads” – in both cases, I don’t think that “showcasing” apps by finding loopholes in the Developer Guidelines and leveraging advertising techniques as tools to manipulate Apple’s ranking algorithm is good for the App Store. I believe this is true for AppGratis and any other native iOS app that is based on this premise. It’s in Apple’s right – and developer agreement – to ban apps that work in this way.

People love free apps, but they also like quality apps. With the App Store approaching 1 million available apps, I think it’s important to focus on aspects like search, human curation, and smarter algorithms that aren’t limited to “download velocity” but also recommend apps based on a user’s tastes and needs. Apple bought Chomp and revamped search and Genius with iOS 6, but – as I’ve argued before – the App Store’s search and recommendations still leave much to be desired. Curation has increased, but it’s still too limited to Categories and standalone sections.

The AppGratis removal sheds light on the fact that, by design and technical limitations, success in the App Store is still too skewed towards Charts. If the algorithm powering Charts can’t be improved to filter apps that are being downloaded because of “forecasting” tactics, than it’s time for Apple to find other ways to ensure more developers can make a living on the App Store without having to enter the Top 50. And this is true for Apple as well: their “Free App of the Week” initiative puts a different app in the Top Free chart on a weekly basis (but, at least, you can trust Apple’s App Store team to pick quality apps, not the highest bidders).

Where Apple doesn’t get with its own curation and algorithms, we need more third-party developers to chime in with app discovery solutions that don’t involve buying your way into visibility. TouchArcade does a great job with editorial curation and reviews of the best games – not the ones that are paying for “forecasts” and to “connect advertisers” with users. Just great games, reviewed by gamers, presented in a native app with fantastic navigation and layout. Or, take the just-released AppShopper Social (which I have been beta-testing): a way to follow your friends (something the App Store doesn’t allow) and get app recommendations from real people who don’t work at Apple but who are interested in great paid and free apps.