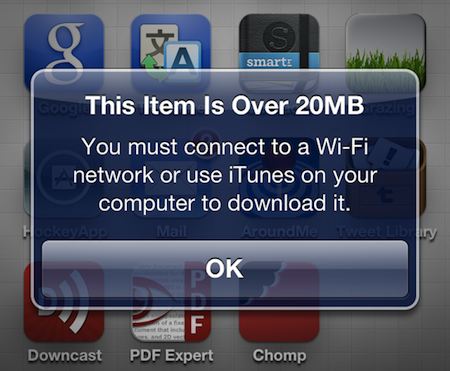 Matthew Panzarino at The Next Web has a good overview of a possible issue with the rumored iPad 3’s Retina Display and universal apps: download sizes and 3G. He explains:

Apple’s iPad 3 is set to launch next week and all signs point to it having a Retina display running at 2048×1536 pixels. This should provide a clearer, sharper image to most users and will display many applications in a fantastic new light, as long as developers have prepared them properly.

But the necessity to include these images may present a problem with the mandatory 20MB file size limit that Apple has imposed on 3G downloads.

The problem being: if the iPad really goes Retina, then developers of apps using custom graphics will have to use new images, which will likely be heavy and bump the download size of an app. For universal apps, already carrying Retina and non-Retina images (the latter both for iPhone and iPad), this can become a serious issue if we assume that most users who will see the “Over 20 MB” alert will be scared away or simply forget to buy an app. And developers (and Apple) want to make the process of buying apps as frictionless and immediate as possible.

I see two solutions. Either Apple gets the carriers to agree to larger download sizes, establishing a new “average” that should work for most apps (let’s say 60 MB as Panzarino suggests), or they rebuild the download mechanism completely by allowing devices to “ignore” resources they don’t need. The second solution would be a “cleaner” approach, in that it would address the root of this likely scenario – that is, devices downloading apps containing all kinds of images and resources for Retina and non-Retina displays.

By “localizing” images in a way languages are localized on the OS, Apple could find a way to know if an image is destined to an iPad or not. And if so, if it’s also destined to a Retina iPad, or old-generation iPad. Furthermore, in theory, this would also allow Apple to differentiate between images used by an iPhone and iPad which, right now, are always downloaded within the same, single .app package. Paul Haddad, who tweeted about the issue today, confirms my suspicion that this method would require a fundamental change to apps – I can only assume it would require different naming conventions or new APIs to let devices be “smarter” in understanding the resources they need to look for when downloading a new app. But the issue is real – always assuming the iPad 3 will feature a Retina Display, which seems like a pretty good bet at this point – and I think this is something Apple has surely considered.

The other way, of course, is to get carriers on board with larger downloads while on 3G – but the issue of universal apps bumping downloads (and thus 3G usage) would still remain for the users, and Apple would still need to somehow address the core of the issue, which is the existence of Retina and non-Retina devices downloading universal apps containing multiple custom graphics at the same time. I agree with Matthew, this issue will be an interesting one to watch.