If I had to, I could get by with an iPad Pro and the Apple Smart Cover as a basic iPad setup. To complement my writing workflow and get the most out of the iPad’s hardware, though, I’ve tested several accessories over the past year from stands and covers to keyboards and Bluetooth headphones. These are the ones I like and use the most.

When I want or need to use the iPad Pro primarily with multitouch, I think Twelve South’s ParcSlope provides the best angle and grip for any kind of flat surface. 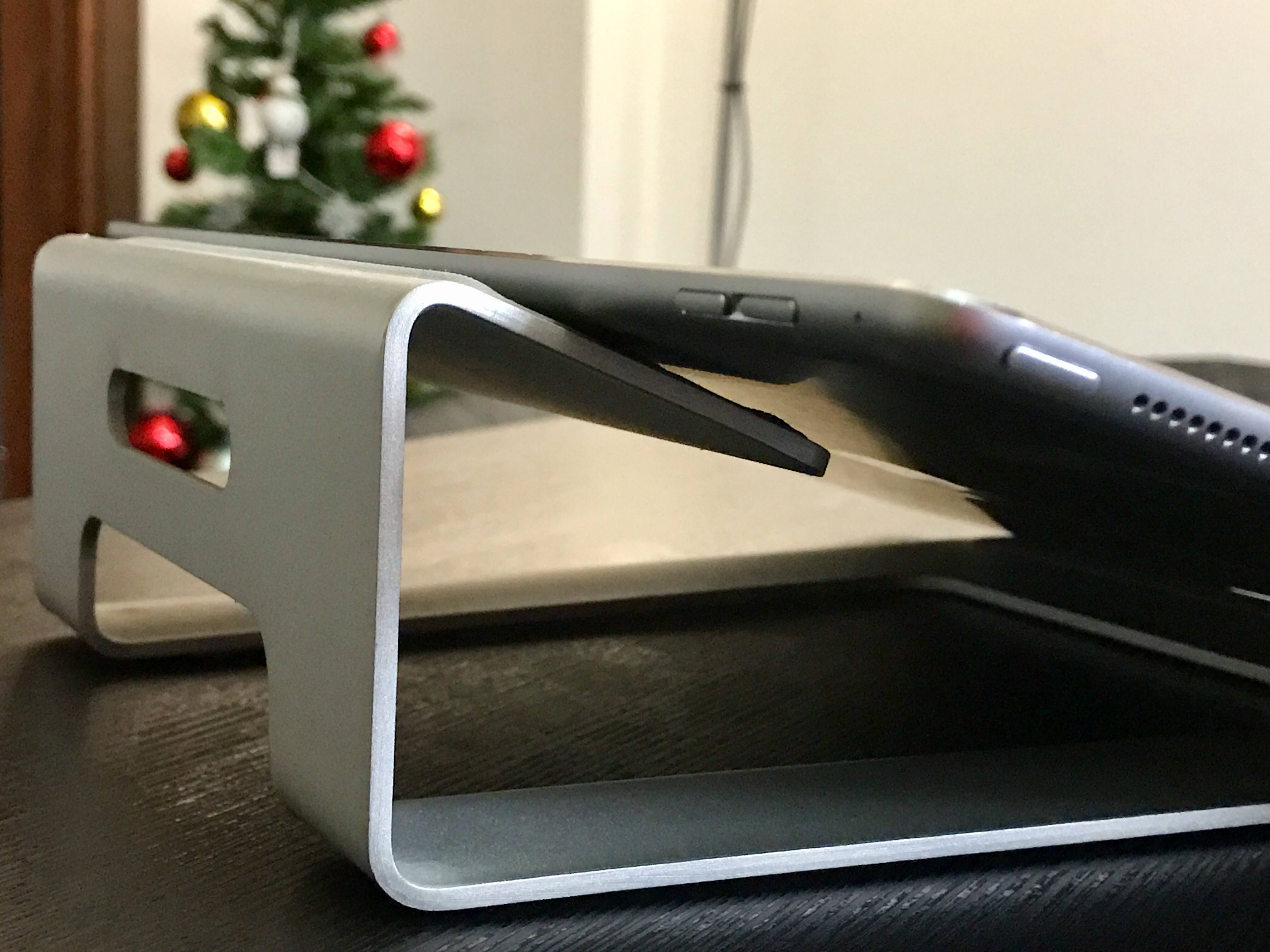 Originally conceived as a MacBook stand, the ParcSlope tilts the iPad Pro at a higher angle (18 degrees) than a folded Smart Cover, which helps me hunch over the screen less. The ParcSlope is made of sturdy aluminum with a soft rubber pad to hold the iPad in place. Similarly to other Twelve South products, it almost looks like an accessory Apple would make.

If I know I’m going to use the iPad Pro via touch for several hours, I grab the ParcSlope and put it on my desk.

As I wrote last month, I typed my entire iOS 10 review on an Apple Magic Keyboard (held in place by the Studio Neat Canopy stand) and used it every day until I discovered the Razer Keyboard Case for iPad Pro in mid-September. This keyboard is flawed in many ways and it’s not for everyone, but it’s also the kind of accessory I needed to comfortably type from anywhere during my average writing day.

What sets the Razer keyboard apart is the case that holds the iPad. Unlike other keyboard-case combos, Razer added an adjustable metal kickstand that allows you to change the viewing angle of the iPad’s screen while retaining a firm position that prevents the device from wiggling too much when typing. 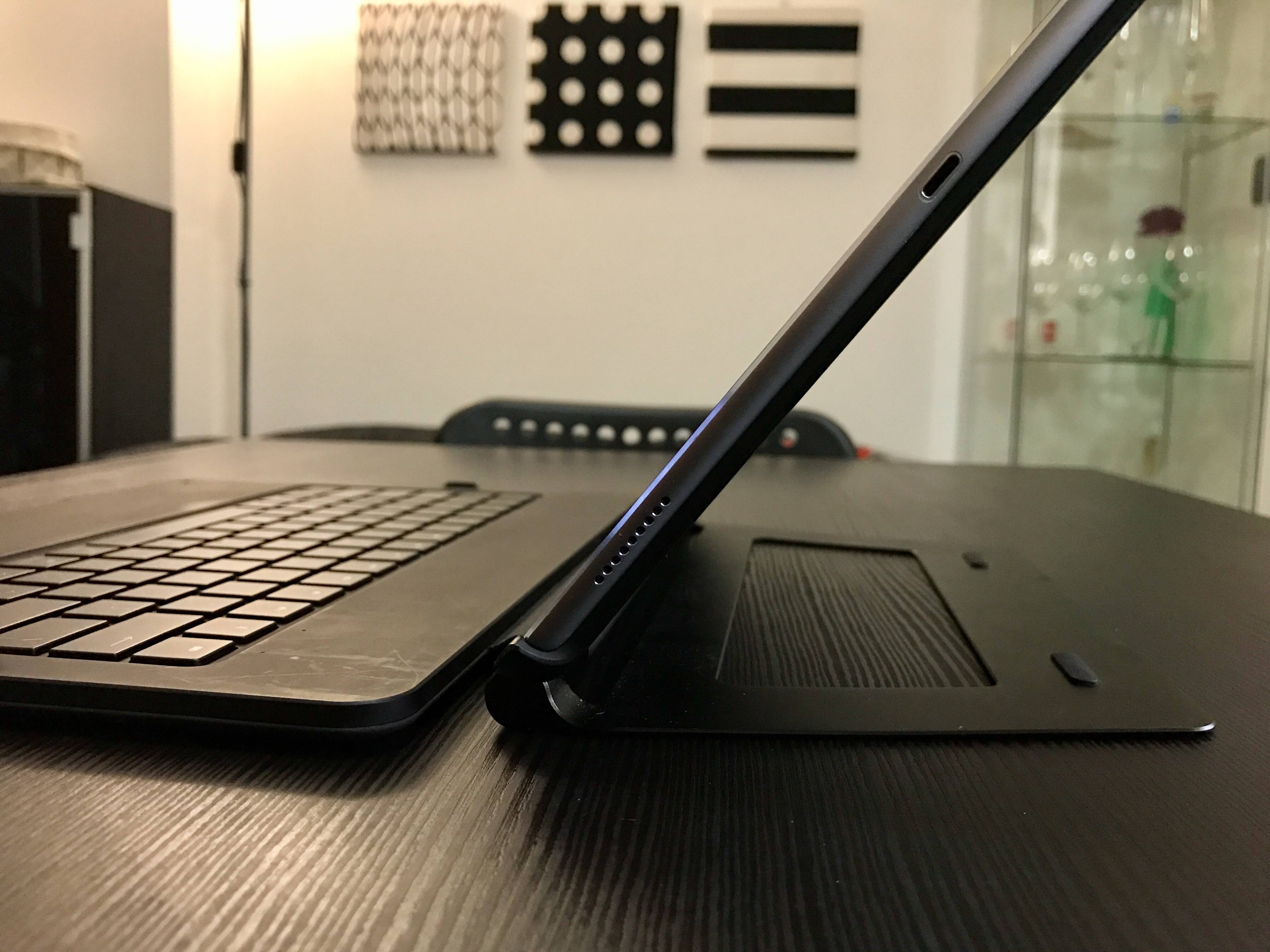 This has been a revelation for me as I spend a lot of time waiting in my car and I want to get work done in those hours; with the Razer keyboard, I can type on a full-size laptop keyboard with the ability to adjust the iPad’s angle.

Furthermore, Razer built a mechanical keyboard that is backlit (with multiple illumination levels) and features iOS-specific media keys. This is great to type at night and to access functions like screenshots and playing music without having to touch the screen. When I’m not typing on it, I usually detach the keyboard and put the iPad Pro inside the case on my lap to watch TV shows or play videogames.

For more details and impressions, you can read my original review here.

I bought this external battery earlier this year and I’ve been carrying it around with me everywhere I go.

The PowerCore 20000 gives the best results when used with devices with smaller-capacity batteries (like iPhones), but I’ve found it to provide enough power to keep an iPad Pro alive until I get home and can use a real charger. Effectively, I use this to keep the iPad Pro around the critical 10% of battery left so I can finish what I’m doing. When I don’t use it with the iPad Pro, my girlfriend and I fully recharge our iPhones with it.

Speaking of chargers: if you have an iPad Pro 12.9-inch, you need to upgrade to the 29W model and get a USB-C to Lightning cable. The 12.9-inch iPad Pro is the only iPad to support USB Power Delivery with fast charging, which enables the device to recharge considerably faster than when using the default 12W charger.

Earlier this year, I ran a series of tests and discovered that the 29W adapter took 90 minutes to charge an iPad Pro from 0 to 80%; the 12W model needed 3.5 hours to perform the same charge.

Anyone who works on a 12.9-inch iPad Pro every day needs to buy one of these.

I’ve bought several headphones this year.4 After months of testing, I realized that I liked the B&O H6 (2nd generation, over-ear) wired headphones best, but I wanted to have a wireless version with the same benefits. Reviews for the wireless H7 variation weren’t positive, so I set out to find something comparable that would be just as light and elegant, with good Bluetooth performance, decent battery life, and large over-ear cups, and that I could wear for many consecutive hours with noise cancellation.

After weeks of research and reading other people’s reviews, I went with the Sennheiser Momentum 2.0 Wireless and I’m extremely happy with my purchase. These are my ideal wireless headphones for prolonged listening sessions and I love the sound they produce as well as their design.

The Momentum 2.0 are comfortable thanks to an over-ear design that I barely feel around my ears (unlike the Beats Solo3, which are on-ear and I mostly use when working out in shorter bursts of time as they press against my head too much). The memory foam material of the ear cups is soft and has a premium feel to it. The headphones’ overall build quality is top notch – I particularly like the adjustable steel arms and texture of the headband.

Connection with the Momentum 2.0 happens over Bluetooth, which isn’t as fast or reliable (or as impressive, range-wise) as the W1 chip found in the Solo3, but because I use them when I’m listening to a nearby device (usually my iPad), Bluetooth hasn’t been an issue. One of the Momentum’s best features is that they can pair with multiple devices at once: when I turn them on, they connect to both my iPhone and iPad and I can switch between audio sources seamlessly. If I only want to hear sounds from my iPad, I disconnect the headphones from the iPhone’s Control Center – a constant reminder that Apple made a good choice in simplifying wireless headphone management with iOS 10.

The Momentum 2.0 Wireless sound great: they don’t have the heavy bass of the Beats Solo and Studio, and they’re fantastic for alt-rock, pop, and post-rock (my three top genres). Active noise cancellation is good as it muffles a lot of what goes around me (though it doesn’t completely mute loud sounds); I’ve been leaving the headphones on even when not listening to music because I like the increased isolation when I’m writing.

The Sennheiser Momentum 2.0 Wireless are one of my favorite purchases of the year – they are the culmination of months of testing different headphones, and I’m carrying them everywhere I go.

The iPad Pro’s large screen makes it a fantastic device to play videogames. And while iOS is best experienced with multitouch, an increasing amount of quality iPad games have added support for MFi controllers over the past two years; despite some limitations, I find playing with a controller and the iPad Pro in front of me surprisingly engaging.

The SteelSeries Nimbus is one of the best console-like controllers you can find for iOS and tvOS. There are two analog sticks at the bottom, a d-pad in the top left, and four buttons on the right side. There are four shoulder buttons and a central menu button to access multiple functions in games, too. The Nimbus feels like a mix of the Wii U and Xbox One controllers – I think it looks nice and, more importantly, it feels good. Buttons are clicky enough, the d-pad is okay, and even the analog sticks – while not as good as the DualShock 4’s ones, in my opinion – are superior to other MFi controllers I’ve tested, including the Gamevice for iPhone (which I own and regularly use).

Everyone has different preferences for analog sticks and buttons, but the Nimbus strikes a good balance of premium quality and comfort across the board. I’ve enjoyed playing Oceanhorn and Crashlands with the iPad Pro propped up on my lap or a desk. I look forward to playing more games this way next year.

After almost five years of using a Tom Bihn Ristretto bag every day, earlier this year I decided to upgrade to a bigger bag to accomodate the iPad Pro and wireless headphones. I had no doubt I was going to get another Tom Bihn product (I’m a huge fan of the company); after some de rigueur research, the Daylight Briefcase seemed like the best option for me. I ordered one before WWDC and I went to San Francisco with it.

The Daylight Briefcase is a laptop bag that can fit the 12.9-inch iPad Pro perfectly. Like other Tom Bihn bags, there are plenty of compartments and semi-hidden pockets in and out, which I use to hold accessories and cables. The Daylight Briefcase is made of a high-quality nylon material that is durable and can resist a variety of scenarios such as rain, relaxing at the beach, and being walked over by people and dogs (all personally tested). The Absolute shoulder strap (a $20 upgrade) is comfortable and adjustable, and I like the sober-but-not-boring look of the whole product.

In more extreme situations, the Daylight Briefcase has acted as a carry-on bag for flights with tons of hardware and even t-shirts inside. I wouldn’t use any other bag for my iPad Pro and related accessories. I can’t recommend this bag enough.