When Apple refreshed its online store with a new USB-C to Lightning cable with support for fast charging through a 29W power adapter on the 12.9-inch iPad Pro last week, the addition immediately caught my interest.

You can also use the cable with an Apple 29W USB-C Power Adapter to take advantage of the fast charging feature on the 12.9-inch iPad Pro. – Apple

Just as everyone was focusing on the smaller iPad Pro and its True Tone display and superior camera, Apple’s semi-hidden note on fast charging seemed to promise a fix for what is, in my opinion, the most annoying aspect of the big iPad Pro – it takes too long to charge.

As I noticed when I was reviewing the iPad Pro last year (and as reported by other publications), the 12W power adapter included in the iPad Pro box takes about four and a half hours to fully charge the device. While the 12W adapter is recommended for fast charging on the iPhone, it barely manages charge a 12.9-inch iPad Pro in under five hours if it’s not being used.

I use the iPad Pro as my only computer every day, and I often need to quickly charge it before going out so I know it won’t run out of juice when I’m using it for a few hours on 4G with music playing through the speakers. Fast charging on the iPad Pro is a big deal to me, though I understand why people who primarily use it at home and charge it overnight won’t see the appeal of it. As soon as we wrapped up our coverage of the March 21 event, I went ahead and splurged 98 Euros on a 29W adapter and a 2-meter USB-C to Lightning cable.

After I received the 29W adapter and the cable, I tried to charge my iPad Pro while I was using it and I noticed that it was way faster than the default 12W adapter. I started wondering: in addition to traditional measurements (e.g. time to fully charge) and empirical evidence, could there be a way to benchmark the 29W and 12W adapters to obtain averages for different charging conditions in a series of 10-minute samples?

I asked Marco Arment if I could use his battery level monitoring tool that he built to observe the performance of Overcast for version 2.5 of the app. Marco was kind enough to send me a build of an app which, by using IOKit (with private APIs not meant for App Store distribution), reports changes in battery level over time for both gain and loss of energy.

The app does what other battery utilities from the App Store can’t do: it detects the type of charger being used, it displays elapsed time during each test (it doesn’t have to run in the foreground), and, more importantly, it returns average gains in milliamperes when a charger is plugged in.

Furthermore, IOKit exposes adapter information that is printed on the physical adapters but not usually reported by iOS itself. When connected to the 12W adapter, iOS refers to it as a 12W “USB brick” (12W = 2.4A x 5V). With that charger and the screen turned off, iOS reports an average gain of 1680 mA, which, considering that electrical efficiencies are never 100% with USB adapters, is pretty good.

As for USB PD: it stands for USB Power Delivery, the new single-wire protocol that enables power and data transfer through a single cable. In hindsight, it seems like the new USB controller in the 12.9-inch iPad Pro wasn’t only meant to be used for faster transfers, but for faster charging as well.

The USB Power Delivery specification is also used by the 2015 MacBook. Contrary to what some initially reported, the 29W adapter isn’t new at all – it’s the same power adapter Apple released last year, only now it can be used by the iPad Pro as well.

With Marco’s app and my two Apple adapters, I ran a series of tests to understand adapter performance in a variety of conditions. I’ve compiled the results below, with some interesting takeaways.

I tested charging with Apple’s 12W and 29W adapters with baseline settings that I never changed:

For each test, I noted the average mA gain and change in system-reported battery charging level.

A note on fast charging. As you can see in my chart below, the estimated charging minutes is the time it would take an adapter to charge an iPad Pro (12.9-inch) from 0% to 80%.

Why 80% instead of 100%? As Apple explains on its Batteries page, their lithium-ion batteries use fast charging to reach 80% of their capacity before switching to (slower) trickle charging.

As Apple writes, “the amount of time it takes to reach that first 80% will vary depending on your settings and which device you’re charging”.

By using the same device and the same settings with two different adapters, this method based on average mA gain should provide an accurate estimate of how much it would take to charge an iPad Pro from 0% to 80%.1

Now, onto the results. 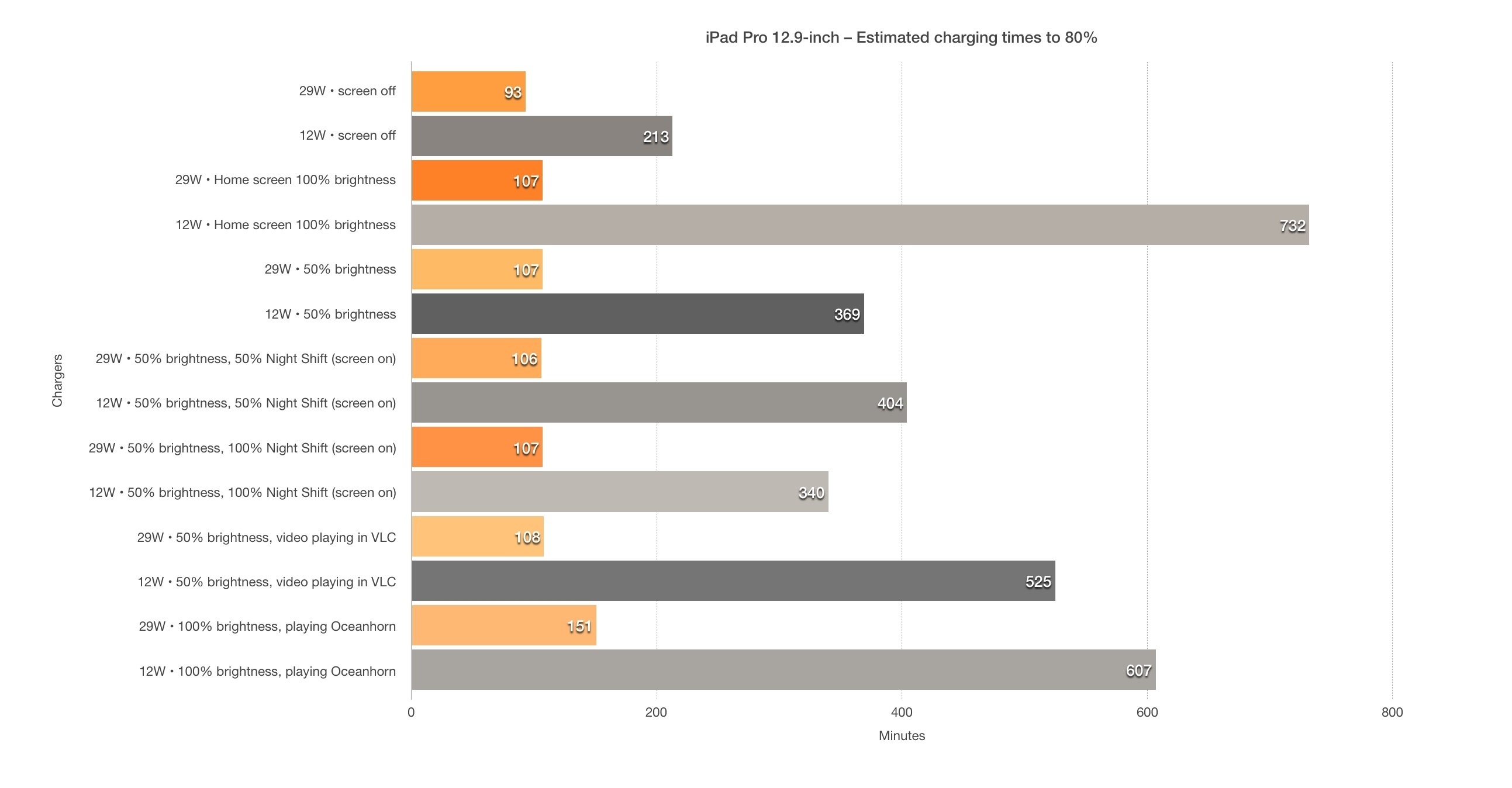 As you can see in the chart above, the results are clear: fast charging with the new 29W adapter trumps regular charging with the 12W model in every test. Here are a few more notable tidbits to further put the two adapters in perspective:

The 29W USB-C power adapter with fast charging on the iPad Pro isn’t only capable of quickly charging an iPad Pro while its screen is turned off – most notably, it can both sustain and power the device considerably while it’s working hard used at full brightness. The 29W adapter is remarkably consistent in battery gains in a variety of conditions and it dramatically reduces the amount of time required to charge the iPad Pro.

I could guess Apple’s motivations for selling the 29W power adapter as a separate accessory (one could argue that fast charging for the iPad Pro wasn’t ready to ship last year). In an ideal world, however, the 29W adapter and USB-C to Lightning cable should be included in the 12.9-inch iPad Pro box.

The performance gap between the 29W and 12W power adapters is simply too big to ignore: every iPad Pro user would want to spend less time charging their device and end up with more battery, more quickly. The 12W power adapter essentially brings glorified iPhone charging to the iPad Pro – a subpar experience that, at this point, is barely acceptable.

If you use a 12.9-inch iPad Pro as your primary computer every day, I strongly recommend getting the 29W USB-C power adapter and USB-C to Lightning cable. It’s money well spent.