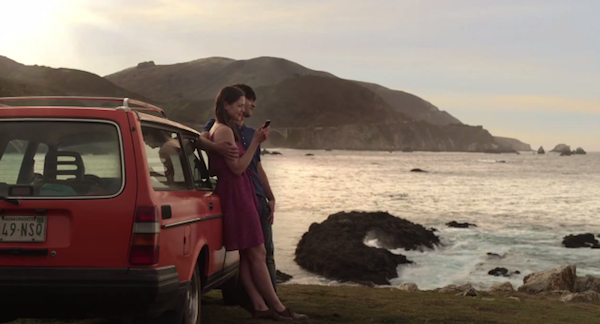 A few minutes ago Apple uploaded two new iPhone 4S commercials on its website and official YouTube channel. The ads, as with previous iPhone 4S promotional videos, focus on Siri, and they might just be the best ones about the voice-based assistant yet.

The ads, called “Rock God” and “Road Trip”, share a common theme: people talking to their assistant using natural language and a friendly tone, not simply asking a piece of software to execute commands.

In Road Trip, a guy and his girlfriend are organizing a road trip to California. Look at the initial setting: it’s cold outside, they’re about the get in the car, and they want to get from the cold of East Coast in February to the sunny Santa Cruz in California. The guy asks Siri, and they’re on the road. Camera cuts to the guy’s face in the car. He’s looking for a barbecue in Kansas City. Camera cuts to girl’s face in the car. She’s looking for a rodeo. Camera changes again, this time the couple doesn’t know where they are, and the girl asks “Where are we?”, with the look of someone who knows Siri will have an answer. They’re in Santa Rosa. Change again. How big is the Grand Canyon? Sure enough, Siri can look that up on Wolfram Alpha or Wikipedia. But then the gas runs out: how about finding a station the guys can walk to? Finally, the ad reaches its climax when our two characters have seemingly reached their destination, or are fairly close, and are looking at the stars. She asks: “What does Orion look like?”. Siri displays sky data inline. The video closes with the opposite setting of how it began: sunny California, he’s wearing a t-shirt, looking at the horizon, and she’s telling Siri like you would do with an old friend – Remind me to do this again. Siri, with its human-like voice, replies: Okay, I’ll remind you.

The second commercial, Rock God, has a more “fun” approach. There’s this kid that “has to get a guitar”, and he’s so excited about it he needs to ask Siri now. Why is he so excited about getting a guitar? What’s the story here? Perhaps, I imagine, he has just decided with his friends that it’s time to put a band together and start playing. So, Siri gives him location info about stores selling musical instruments, and in the next scene our kid is learning how to play. How do I play London Calling? Whole Lotta Love? How about that chord? Siri displays information on screen. Fairly regular stuff for now. Then the ad changes – our character is sending a message to Julie and Kate about playing at the garage tonight. Apple’s music stops. The kids are playing – they’re doing rock ‘n’ roll! – and finish their song. “Call me Rock God”, the kid tells Siri, softly.

You see, these aren’t just ads. In 30 seconds, we’re told stories. In 30 seconds, we are not shown technical features and RAM specifications, we’re given real examples of real people we can relate to. We’re shown two young people in love with each other that just want to get to California and see the sunset together. We’re shown a young boy with a simple dream, playing guitar, yet a dream that’s important to him – something that makes his life worth living and enjoying even for those 30 minutes when he gets his band mates together and nothing else matters. Just music. Call me Rock God.

In 30 seconds, we’re shown how technology can make people’s lives better. We’re reminded, once again, that this industry, this love for the latest gadget, doesn’t necessarily have to be about tech specs – it’s the technology married with the liberal arts. It’s about playing London Calling with your friends. It’s about driving to California with the woman you love and watch the stars just for one night.

He would be proud.