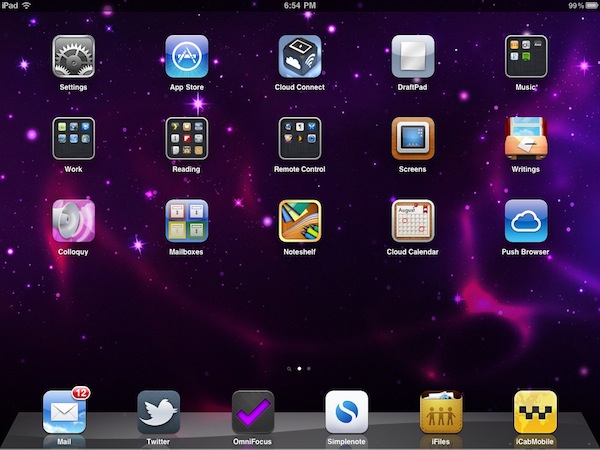 Instapaper developer Marco Arment makes the point on his personal blog about the iPad fitting more the entertainment category, rather than the productivity one. He thinks that, one year after its introduction, Apple hasn’t found the “sweet spot” yet for this new device:

Apple is now adapting to the market’s actual use by retreating somewhat from office productivity and pushing strongly into new territory — casual media creation — to see if that gets a stronger uptake in practice. I think it will be a lot more interesting than office productivity, but there’s still a lot of work that needs to be done in iOS to make it practical (especially regarding file transfers with computers).

I still don’t think Apple has found the sweet spot for the iPad’s usage: the ideal role it fills in personal computing. And I don’t think we, as developers or iPad owners, have found it, either. But I know that sweet spot exists, and for a computer category that has only existed for one year, we’re rushing towards it remarkably quickly.

Maybe it’s just me, but in this past year I’ve found a number of ways the iPad can help me be more productive to complete a series of tasks that would require a laptop otherwise. More importantly, the iPad has also created a new category of tasks that didn’t exist before.

I can name a few apps:

- OmniFocus lets me organize my tasks and projects on the couch, or on the go, with online sync and a great interface, sexier and more intuitive than the Mac’s counterpart;

- Cloud Connect gives me remote access to all my computers and AirPort disks. Similarly, Screens is the best VCN client I’ve ever used;

- iFiles pulls files and folders from a variety of cloud services. Go find something like this for OS X and make sure to ping me;

- Simplenote and Writings sync all my text documents to the cloud, so I can edit them later on my Mac;

- Push Browser can send tabs remotely to my desktop browser;

- Flipboard allows me to catch up on news in a way that wasn’t possible before;

- Plex enables me to access and view all my media while I’m out;

- DisplayPad turns my iPad into a second monitor.

These are just a few examples of iPad apps that have helped me do and achieve more since April 2010, when the iPad 1 went on sale. The iPad 2, with faster processor and more RAM, will likely make these apps even more powerful and easier to use. Not to mention the iOS updates released by Apple: iOS 4.2 brought multitasking and folders, 4.3 lets me use my WiFi iPad without an actual wireless connection thanks to Personal Hotspot. With iOS 5 rumored to introduce more cloud-based features, this is just getting better – at least for me.

I think Marco is right when he says developers haven’t found the “sweet spot” for the iPad, but I disagree when he says Apple, too, had to shift the initial focus on the iPad as a productivity tool. The way I see it, Apple is throwing a new device that can do almost anything and is telling developers “to do what they want”. It’s a blank canvas. Some developers haven’t found the sweet spot; the ones I mentioned above surely did.

Marco is a developer, coder and designer, so perhaps the lack of programming apps for the iPad played an important role in his iPad usage. I understand his position, and perhaps it’s easier for a blogger and writer to be productive with the iPad. The amount of writing and RSS apps for the iPad comes in handy, for sure.

If we follow Marco’s point, then I guess some people could say they are not productive with a Mac, either. I believe it’s not really about the device itself, it’s about the software available for it and your expectations. Perhaps Marco set his expectations too high and he was disappointed in seeing GarageBand and iMovie, rather than full-featured text editors for the iPad. Apple ships a device with less pre-installed software than a Mac (where is Text Edit for the iPad? iPhoto? iChat?), but the developer community for iOS is thriving.

It’s all about the apps and your workflow. I’ve found mine.