It wouldn’t be iOS automation coverage on MacStories if I didn’t include a list of features that haven’t been implemented yet. Here are some of the features missing from Shortcuts and ideas I’d like Apple to explore in the future.

User interaction with Siri. As I remarked above, this is perhaps the most notably absent feature from Shortcuts today: to run entirely within Siri, your custom shortcuts have to omit all kinds of user interactions. Siri already features the ability to let users confirm requests, offer additional information, or choose one among multiple items in a list; shortcuts running inside Siri should provide the same options.

Automatic triggers for shortcuts. Despite Shortcuts’ powerful new integrations, it’s still not possible to make specific shortcuts run automatically in the background when certain conditions are met. You can’t, for example, run a shortcut when a calendar event is due, or at a specific time of day, or when you leave a location. Whether from the app, the widget, or Siri, shortcuts always have to be manually triggered by the user. What I argued for Do Not Disturb holds true for Shortcuts as well: I’d love it if the app could react to different environmental/OS triggers and run automations on the user’s behalf. Utilities such as Launch Center Pro, Launcher, and IFTTT implemented similar options in the past; Shortcuts should do the same, with even deeper system integrations and more intelligence built-in.

Passing input arguments to a shortcut via voice. Wouldn’t it be great if you could pass a sentence as input text when running a shortcut via Siri? Take the Pay for Lunch example above: if instead of just saying “Pay Lunch” I could say “Pay Lunch to Stephen” and Shortcuts could understand that “to Stephen” is a variable and match it against a contact, the same shortcut could automatically fill the contact name without requiring me to pick one from my address book. Similarly, I could say “start timer MacStories” and “start timer Podcasts” to trigger a shortcut that identifies a part of the sentence as dynamic input text. This is a tough one to pull off, but I’m confident the Shortcuts team can come up with a reliable and elegant solution for it.

Folders for better organization. I think it’s incredible that, four years after Workflow came out, the Shortcuts app still can’t organize shortcuts in folders. As someone with hundreds of shortcuts, I’m disappointed and surprised that Apple didn’t prioritize this feature for the relaunch of the app.

No access to the entire iCloud Drive filesystem. The new Shortcuts app leverages a handful of private entitlements that third-party apps can’t use. Surprisingly, giving users the ability to read any file from their iCloud Drive or save items to any iCloud folder isn’t one of them. If you don’t want to use the manual document picker or Dropbox, Shortcuts is still limited to reading files from and saving them to the sandboxed /Shortcuts/ folder in iCloud Drive. 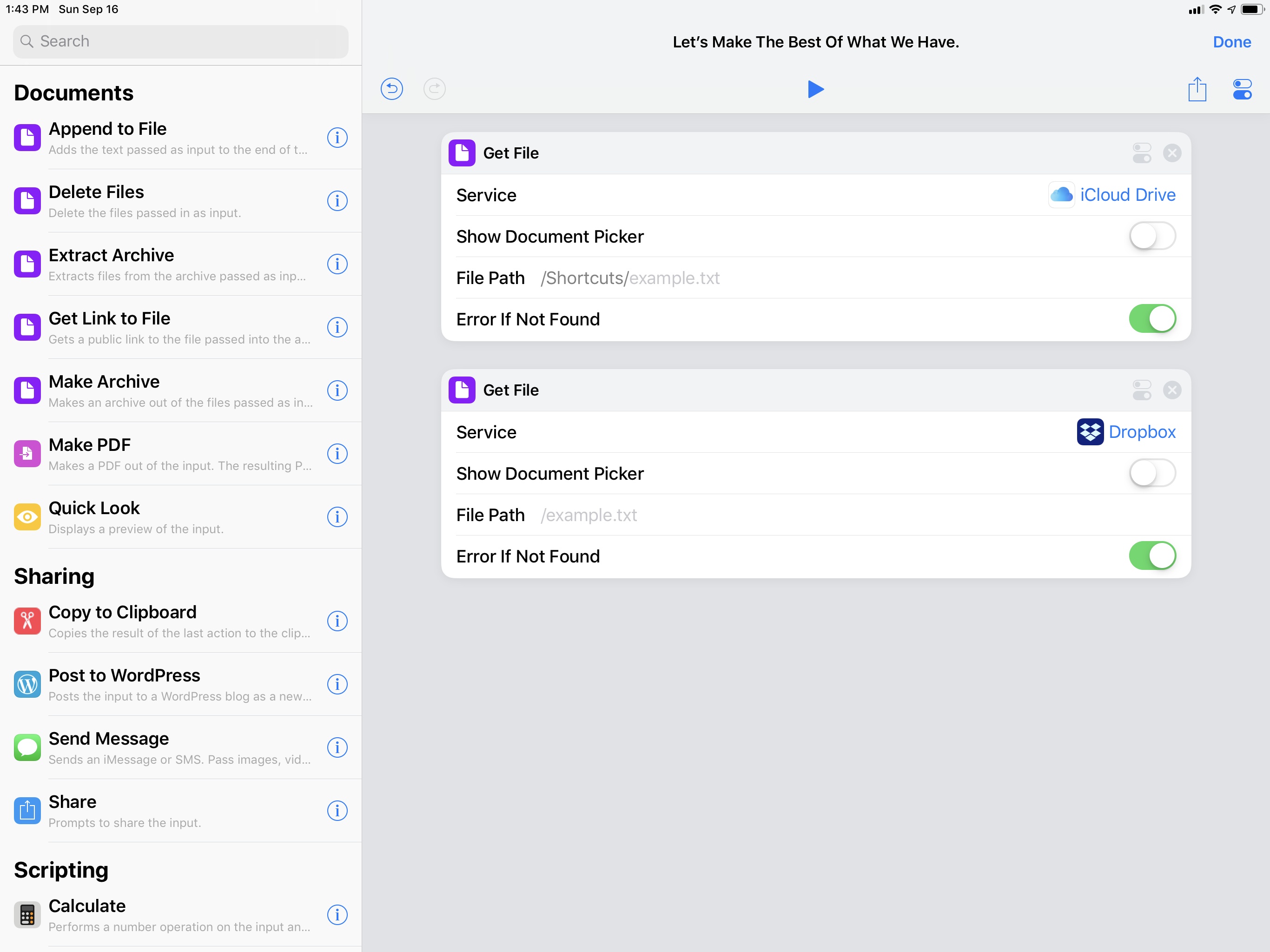 I find it absurd that Shortcuts can access your complete Dropbox account, but the same isn’t true for iCloud Drive.

I understand the security concerns with letting Shortcuts read data from other apps’ directories without showing a user interface, but this is an old problem that Apple has already fixed on macOS with permission prompts and sandboxing rules. Shortcuts should gain the ability to access any iCloud Drive location with a similar permission-first approach – if only just to read files from other folders.

Bring back the Watch app. Unlike Workflow, Shortcuts no longer comes with a native watchOS app. Your custom shortcuts will be suggested on the Siri watch face and you’ll be able to run them there, but there’s no way to bring up a list of all the shortcuts you’d like to run on the Watch anymore.34 Even though the original Workflow app for the Watch wasn’t great, I’m sure Apple could create something much better by taking advantage of private APIs and watchOS 5. Furthermore, a proper Watch app would allow for Shortcuts complications for any watch face besides the Siri one. I hope the Watch app comes back soon.

AirPlay 2 and HomePod actions. Finally, Shortcuts would make for an incredible tool to create automated workflows that control music and podcasts on specific HomePods and other AirPlay 2 devices in your house. Alas, AirPlay 2 continues to be a manual control-only affair in iOS 12 as Shortcuts doesn’t offer any actions to automate connections to individual devices or groups of speakers. You can use Siri to control audio playback on individual AirPlay 2 devices; I’d like to do the same with Shortcuts.

The Future of Automation and the Programmable Assistant

Even though they share the same name, Siri shortcuts and the Shortcuts app have different implications for the future of Siri and automation on iOS. Considered individually, they provide a progressive path for users: from simple, convenient shortcuts to more advanced automation. Together, they herald a fundamentally different vision for user automation on Apple platforms.

Whether they’re suggested in Search or requested from Siri with a personalized phrase, native app shortcuts are a form of lightweight automation presented through the lens of proactive assistance. Apple has (very cleverly) leveraged existing technologies as the foundation of shortcuts, building a system on top of them that can now understand user habits and suggest actions at the most appropriate time. In my experience with iOS 12 for the past three months, I’ve interacted with shortcuts suggested in Search often, multiple times per day. I’ve begun to recognize patterns that iOS 12 has learned about me – such as calling my parents around lunchtime or checking out my Scheduled Reminders list in the evening – and I’ve appreciated the separation between shortcuts recommended in Search and more timely ones pushed to the lock screen. For a first effort, the system works well.

The ability to assign custom phrases to shortcuts may have singlehandedly altered iOS users’ perception of Siri as an app platform. In a single move, Apple has opened up Siri integration to all kinds of apps that didn’t (or couldn’t, for technical reasons) support the SiriKit API before. Now every app action, from launching a specific screen to retrieving a piece of content or performing a background task, is eligible for Siri integration in every permutation of the assistant on every Apple device.35 From a usability standpoint, this has significant ramifications for accessibility too: it enables every user, independent from their iOS proficiency or motor skills, to use Siri as a bridge between their needs and apps. It also means that users can develop their own custom “Siri dialect” over time, much like they would with an actual assistant.

For developers, shortcuts represent an opportunity to extend their apps across the entire Apple ecosystem with varying degrees of customization. I’ve been pleasantly surprised by the fast adoption of shortcuts and custom Siri intents by my favorite apps. Going forward, I expect Apple to continue expanding its custom intent technology in an effort to further open up Siri to thousands more app integrations. This strategy is unlike anything we’ve seen from Amazon or Google. It revolves around Apple’s most valuable platform asset – the App Store – and leverages the unique strengths of iOS: a secure sandboxing model, on-device processing to protect users’ privacy, and the simplicity of installing apps.

While native app shortcuts are an ingenious spin on automation presented in the context of simple proactive recommendations, the Shortcuts app embodies the Workflow team’s vision for rethinking complex automation – now under Apple’s guidance.

There’s no way around it: the relaunch of Workflow as Shortcuts is a resounding success for everyone involved. The Workflow team was able to execute on their idea of automation as a visual programming tool for everyone; in return, existing Workflow users have gotten a much more powerful, stable, and actively developed automation app that can now be used to save even more time by controlling Siri itself.

Questions remain as to whether average users will be interested in the features offered by Shortcuts, but Apple has done a remarkable job in making it easy to get started (with hundreds of pre-built shortcuts) and expanding the scope of Workflow to system features that everybody can understand, such as Do Not Disturb and personalized Siri phrases. And even if Shortcuts continues to be popular among advanced iOS users only, well, the company made sure there’s plenty of new power to be unlocked for those customers too thanks to JavaScript, customizable Siri responses, and support for app shortcuts.

Of all the new features in the Shortcuts app, the ability to run custom shortcuts inside Siri is truly transformative. It reshapes iOS automation as we know it. With custom phrases, remote UIs, and background execution, bundles of actions become single commands that can augment and personalize Siri in ways that weren’t possible before. Thanks to Shortcuts, Siri can now read the news for you, interact with any web API, retrieve data from multiple apps at once, and so much more. In Shortcuts, native app actions become headless extensions for Siri, programmed by users without coding.

We’re going to look back on the Workflow acquisition as one of Apple’s wisest moves in recent years. In one fell swoop, they’ve sidestepped the issues with slow-growing Siri integrations and put the power to extend Siri into the hands of users – all while providing a mature automation suite that connects hundreds of system and app actions together.

With Shortcuts, user automation on Apple platforms is growing beyond the niche of scripting. It’s embracing the present, and doing so in a way that only Apple can.