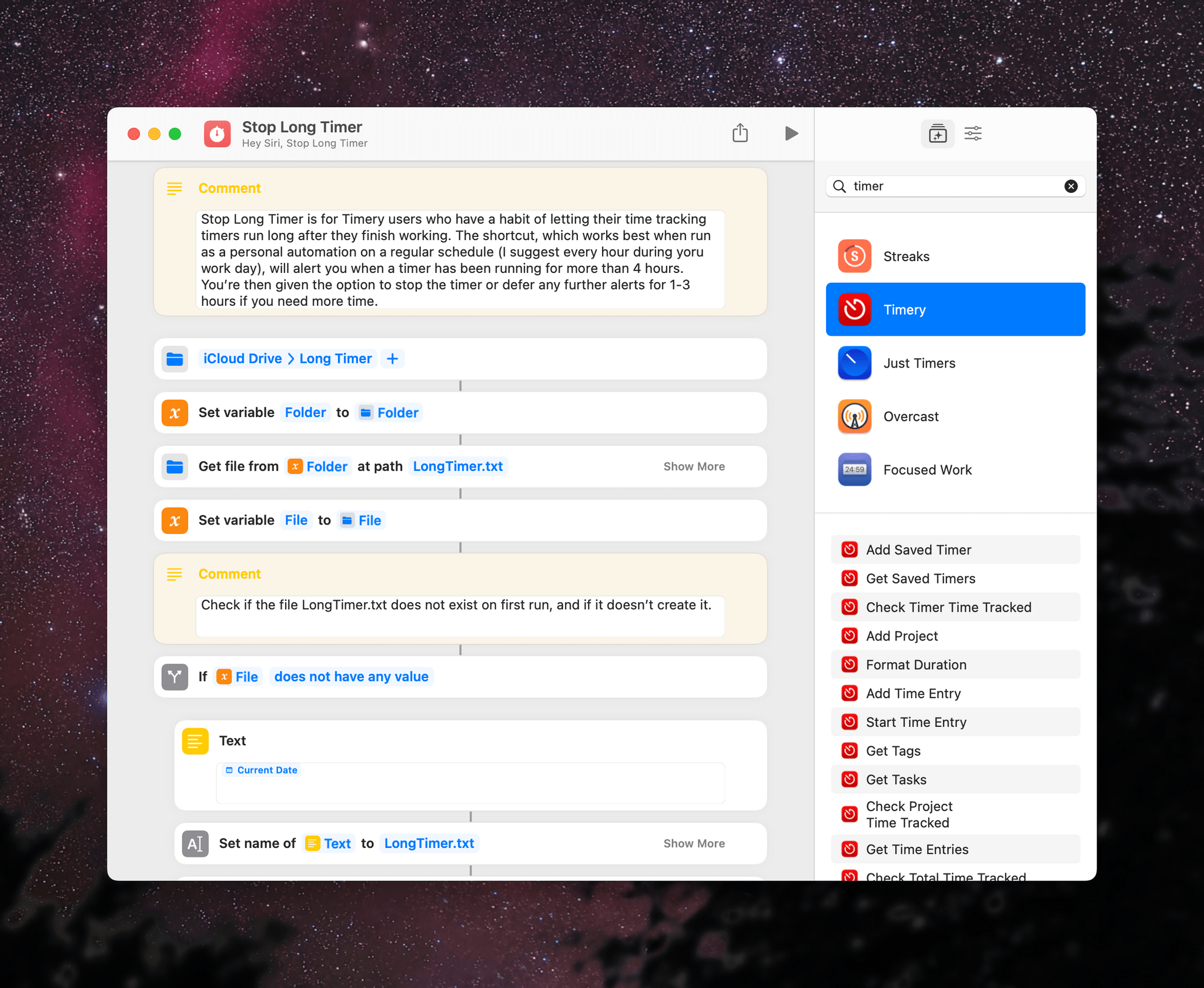 I’ve been using Timery to track my time using the Toggl time tracking service for several years now, and although I’ve gotten better at remembering to stop timers, I still forget sometimes. That’s why I built Stop Long Timer, a shortcut that periodically checks if you’ve had a timer running for a long time and volunteers to stop it. If you decline, Stop Long Timer offers to leave you alone for a while so you can wrap up whatever you’re doing.

Stopping a timer that’s been running for a certain period is the easy part. Timery has an action to check the duration of the current timer and another to stop a timer. What I wanted, though, is something more flexible because sometimes a timer has been running a long time because I’m deep in the middle of a project. In that case, I don’t want to stop the timer. In fact, I don’t want to be bugged again either. That part of Stop Long Timer is a little more complex and is a good example of how you can save data outside a shortcut to use as a reference point. 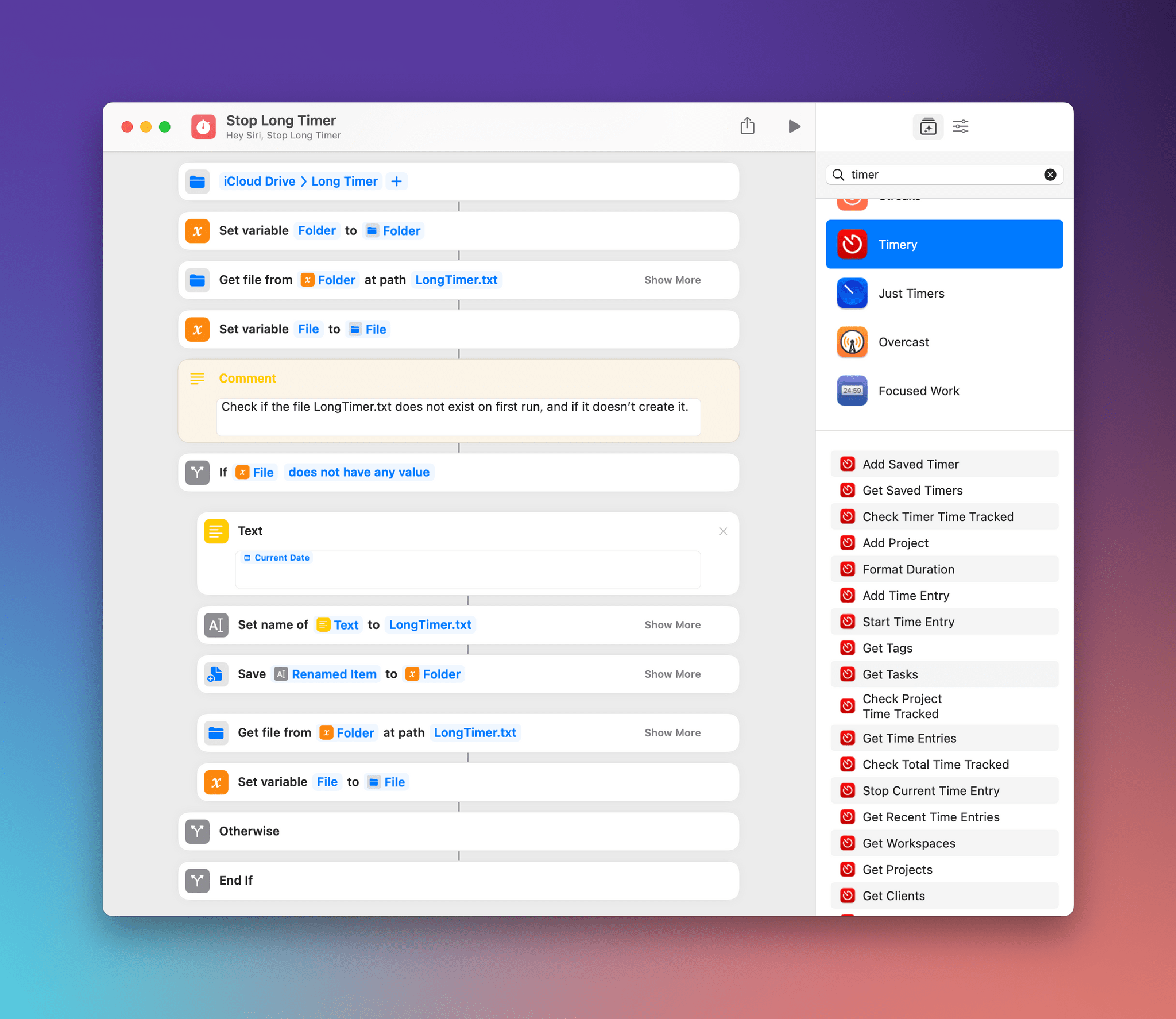 First, Stop Long Timer checks if the file LongTimer.txt exists, and if it doesn’t, the shortcut creates it.

With those setup actions out of the way, Stop Long Timer gets the text from LongTimer.txt formatted as a date and time and compares it to the current date and time. If the difference is negative, the shortcut stops. That may seem like an odd outcome at first, but I’ll get to why that check is necessary shortly.

Checking if long timer alerts have been deferred by the user.

Next, Stop Long Timer checks the duration of the current timer using Timery’s Check Current Time Entry action, saving it to the variable named Timer Duration. The shortcut defines another variable called Minimum Duration, which is the minimum time that must elapse before Stop Long Timer will offer to stop your timer. I’ve set Minimum Duration to four hours because I usually don’t work on one project for more than four hours in a single sitting, but you can set it to whatever fits best with the way you work. 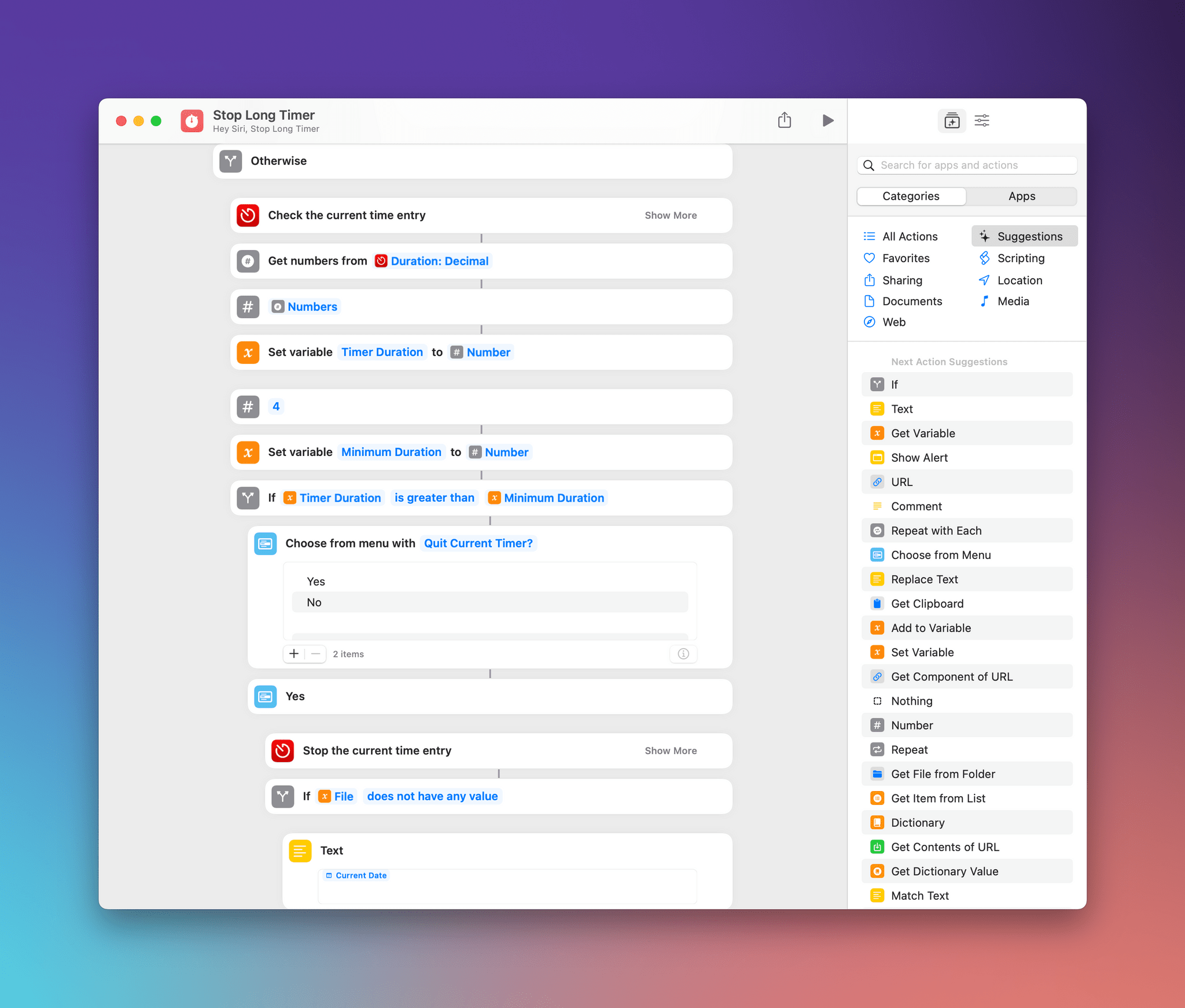 If a timer has been running more than 4 hours, Stop Long Timer offers to stop it.

The ‘if’ block that follows checks if the elapsed time of the current Timery timer is greater than the Minimum Duration, which is four hours by default. If the timer has been running longer, Stop Long Timer offers to end the current timer. If you answer yes, the shortcut stops, and the timer ends. 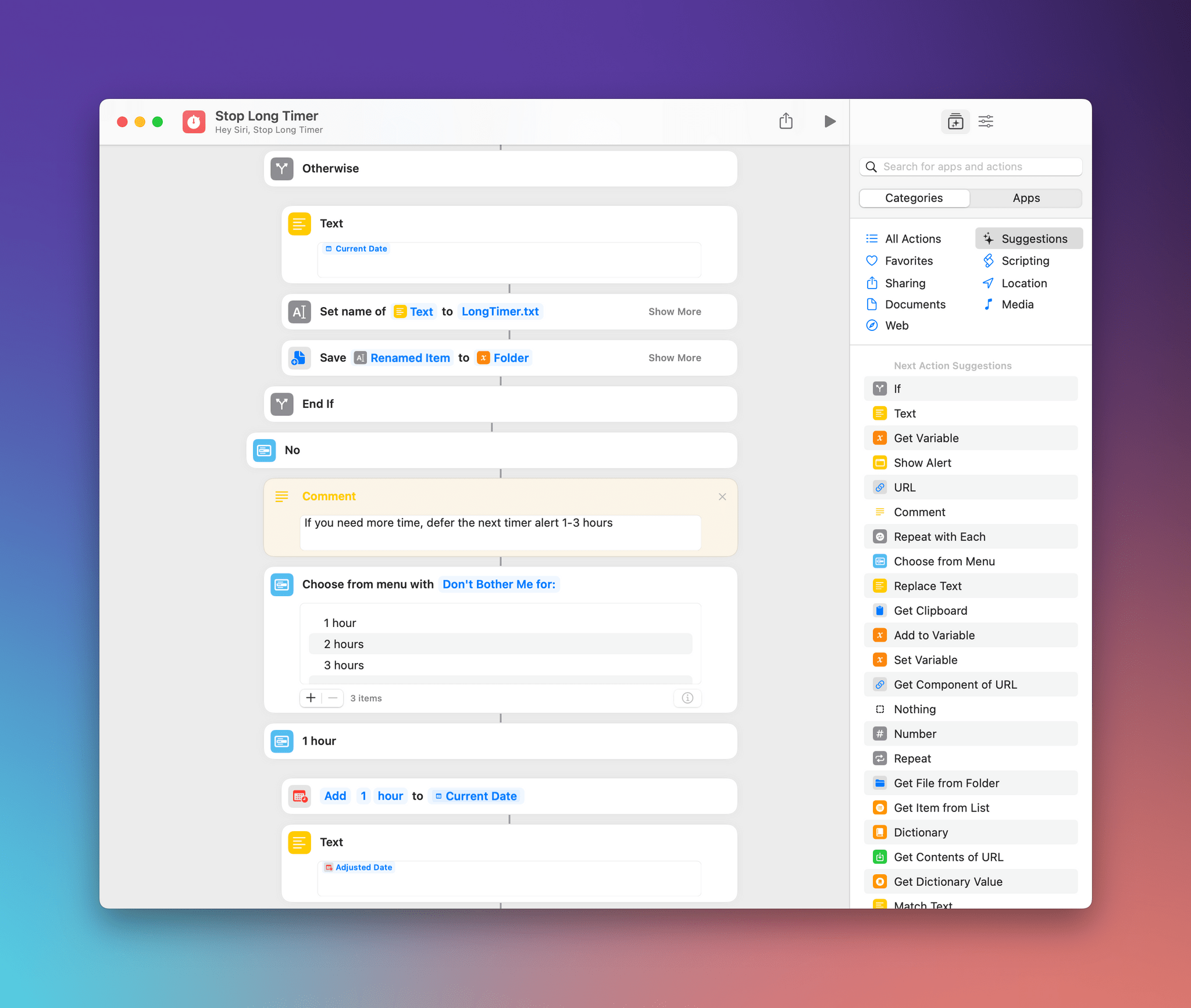 If you don’t want to stop the timer, you’ve got the option to defer it 1-3 hours.

Of course, for Stop Long Timer to work best, it should run automatically. After all, if you could remember to run the shortcut manually, you could just as easily stop any timers that were running instead. 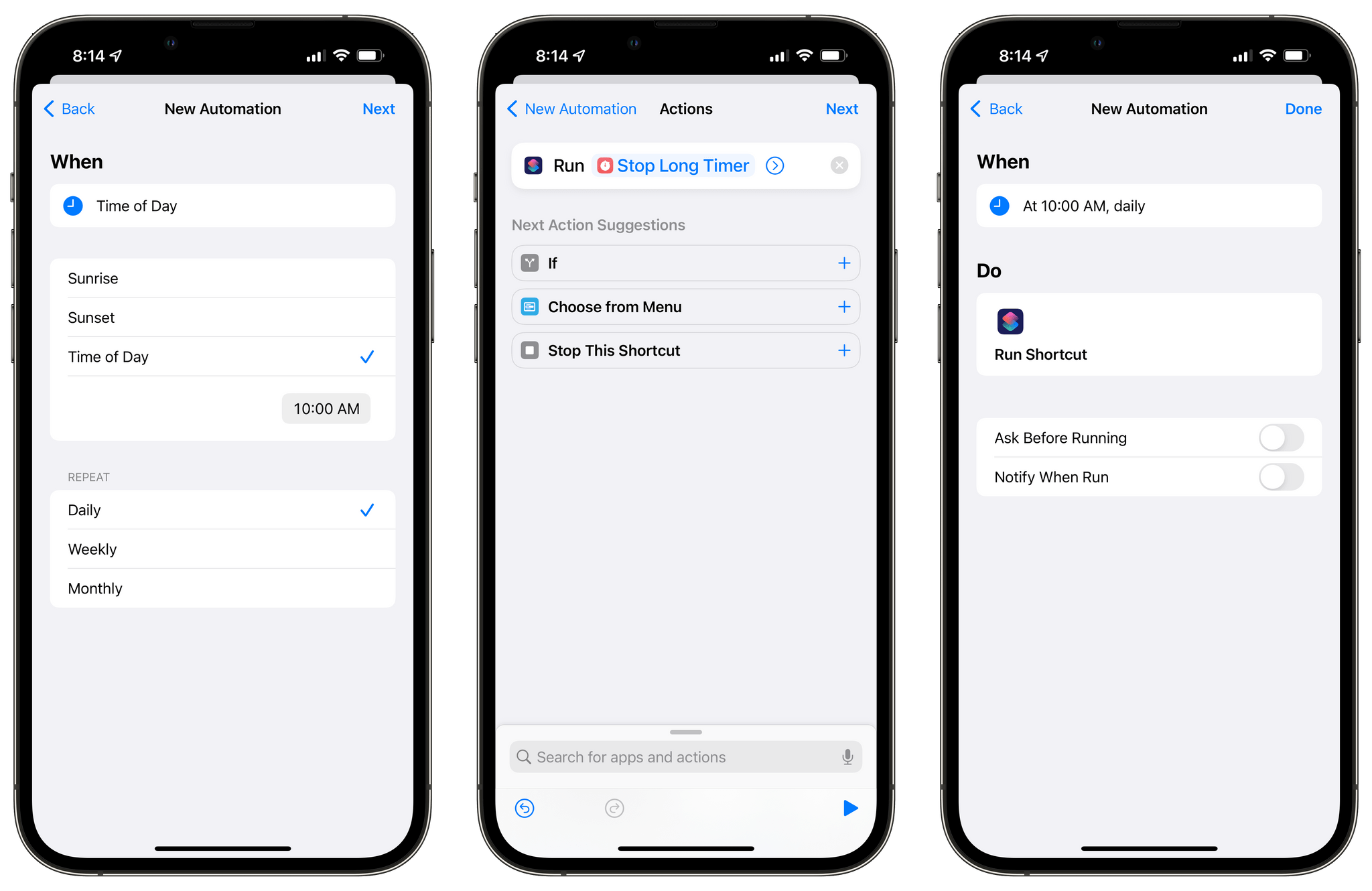 If you strip the time-checking logic out of Stop Long Timer, it’s a very simple shortcut. The way the shortcut uses an external data source to know when to alert the user to a long timer is a nice demonstration of how that technique can be used to enhance your shortcuts, but it also highlights how rudimentary the tools for running shortcuts on a schedule are. Until Shortcuts offers a solution, though, techniques like the plain text file used in Stop Long Timer and third-party apps like Data Jar are excellent solutions.

Stop Long Timer is for Timery users who have a habit of letting their time tracking timers run long after they finish working. The shortcut, which works best when run as a personal automation on a regular schedule (I suggest every hour during your workday), will alert you when a timer has been running for more than 4 hours. You’re then given the option to stop the timer or defer any further alerts for 1-3 hours if you need more time.