Today’s one of those days when I can sit happily at my desk and know that the tech press didn’t win. Despite the mounting evidence, the alleged photographs of bits and pieces, and the last minute rumors of x-chip and y-feature for a gadget we seemingly knew everything about, Apple still managed to pull a fast one that was so obvious it makes even the most certain journalists curse under their breaths. iPad. You should have seen it coming right? Even the iPad 2 was simply referred to as the iPad on its aluminum shell. iPad. Even if it was just a little surprise, it’s a simple reminder that not even those with the best sources can fully beat Apple at its own game. As long as this continues to be true, I’m pretty sure that means Apple is doing alright.

With that said, let’s check out all of the great stuff Apple just launched. 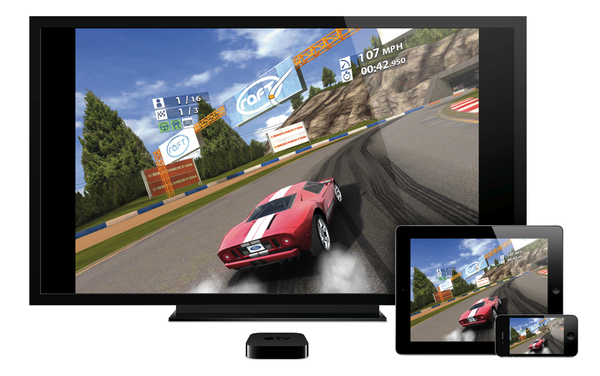 The announcement for the new Apple TV was so brief you’d barely believe it was announced at all. Foreshadowed by the lack of availability in the past week at Apple Retail Stores across the United States, the Apple TV was refreshed today with a streamlined interface and the capability to play 1080p video. It was Ars Technica who managed to uncover that the new Apple TV houses a single-core A5 chip, with an Apple representative noting that your enjoyment of 1080p content will be dependent on your Internet connection. The Apple TV is being offered at the same price ($99) as the older model, is available online, and ships within 1–2 weeks as of this post.

With the new Apple TV comes a 5.0 software update that makes available cloud futures previously available for the iPhone and iPad. Now, Apple TV owners can purchase and access purchased content on their televisions thanks to iCloud. Purchased movies and TV shows can be conveniently watched again, and photos in Photo Stream are now available for your viewing pleasure on the Apple TV. Owners of the 2nd Generation Apple TV can also look forward to the 5.0 update that brings that delivers the same streamlined software experience. If you’re new to Netflix, you can now subscribe to the streaming movie service directly through iTunes.

The main topic of today’s event was of course the iPad that everyone was waiting for: the 3rd generation iPad. Referred consistently throughout the keynote as the “new iPad,” Phil Schiller quickly (yet painstakingly) made sure we understood just how difficult its Retina display is to manufacture. The iPad was presented in comparison to the HD television in your living room: a 48-inch 1920 x 1080 resolution television is easily trounced by the clarity of a 9.7-inch 2048 x 1536 Retina display. At 264 pixels per inch, the new iPad qualifies as a Retina display at 15-inches or closer Schiller gloated, flashing images of the human eye and a complex mathematical formula on screen. In all, that’s over 3.1 million pixels in the iPad’s display. Secondary to the new resolution, the new iPad’s display shows more vibrant colors in comparison to previous models (44% greater color saturation). 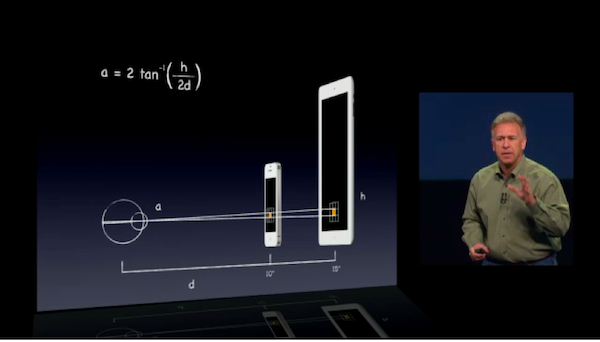 The iPad has a nice display, but what’s behind the glass? The new iPad’s A5X processor is dual-core and features a quad-core GPU. This amounts to a chip that’s four times as powerful as NVIDIA’s Tegra 3, and twice as fast as the iPad 2’s A5. Bluetooth 4.0 is packed inside to connect to the next generation of Bluetooth devices, and while Apple didn’t come out and confirm how much memory is in the new iPad, it’s suspected the new model has a gigabyte of memory. The new processor also features an integrated camera subsystem (an Apple designed ICS) to power a camera similar to the one in the iPhone 4S. 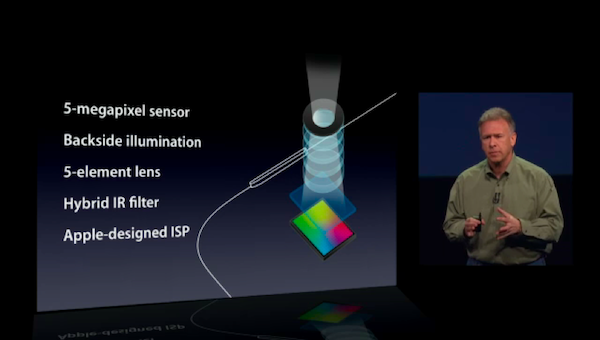 The new iPad’s iSight camera is a five-megapixel shooter that features the same 5-element lens, backside illumination, and IR filter found on the iPhone 4S. Unlike the iPad 2, the new iPad is definitely capable of capturing a good photograph. When not taking still photos, the new iPad can record 1080p and will stabilize recordings so that your home movies are less jittery and more fluid in presentation.

Keeping your iPad alive is a battery that’s just as great as the iPad 2’s; the new iPad has ten hours of battery life for Wi-Fi versions and nine hours when connected to a wireless carrier. For the new iPad, 3G has been pushed aside for 4G capability. Wireless iPads will support everything from EV-DO to LTE, meaning you have worldwide capability built right in (i.e. if 4G isn’t available in a country then you can use 3G). LTE iPads are available on AT&T and Verizon, and Apple is also touting the ability to use your iPad like a hotspot to connect up to five devices.

The pricing tier of previous iPads continues with the new iPad. The new iPad is available in 16 GB, 32 GB, and 64 GB models with and without 4G. You’ll pay an additional $129 for 4G equipped models.

For the Wi-Fi + 4G iPads, Verizon and AT&T offer monthly plans at different tiers depending on how much data you plan to use.

The new iPads are only a millimeter thicker than the iPad 2, and just 0.1 pounds heavier at 1.4 lbs. Nobody likes the sound of these gains, but the additional hardware packed inside and the relatively same form factor makes up for the imperceivable differences. The same form factor also means your previous Smart Covers and iPad 2 docks will work with your new iPad. If you already have an iPad 2, you don’t have to buy new accessories if upgrading.

The iPad 2 is sticking around for a little while longer at $399 for the 16 GB model. While the $100 price drop makes the iPad 2 even more accessible to budget buyers, the Retina display on the new iPads isn’t worth passing by.

The new iPad is now available for pre-order, and will currently be delivered by the 16th in the United States. If you prefer waiting in line, you have until next Friday to plan your trip to your nearest Apple Store. With your new iPad, you might also consider AppleCare+. For $99, you get all the same benefits as AppleCare+ for your iPhone 4S.

All of the Software 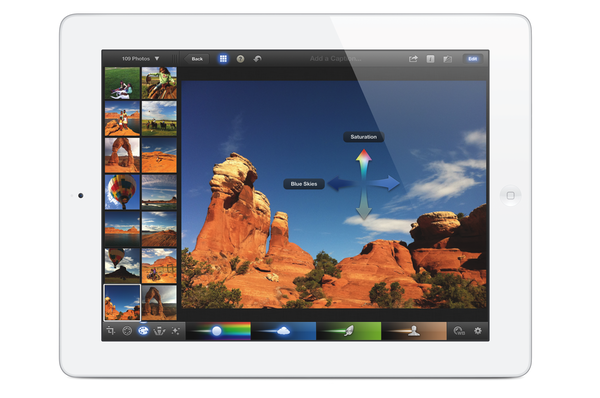 iPhoto for iOS on the 3rd gen iPad

To complete the iLife suite on the iPad, Apple announced and showcased iPhoto for iOS which is now available in the App Store. The iPhoto app for iOS is a more powerful version of Photos, and imports your camera roll and photo stream into a managed library that behaves like iPhoto on the desktop. The biggest benefit iPhoto brings to the table is the myriad of non-destructive editing tools it has available, allowing you to adjust photos taken with the iPad’s new camera or imported from your DSLR via the Camera Connection Kit. At only $4.99, iPhoto is an inexpensive upgrade for iPad users who want more from their photographs.

Launched alongside iPhoto for the iPad were iMovie and GarageBand updates that bring some nice new features to the table. In iMovie, you can now create “Movie trailers” from footage recorded on your iPhone. Trailers bring studio effects and sounds to your recordings so you can make short home movies or introductions that lead into bigger projects. As for GarageBand, you and your friends can rock out in concert thanks to a new syncing features that allows you to virtually jam with up to three friends (four including yourself). 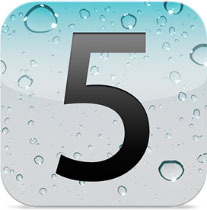 While you’ll likely only need to purchase iPhoto if you’ve been keeping up with all things Apple, you’ll have to update to iOS 5.1. The new operating system launched today for the iPhone and iPad includes some notable features, including a new Camera app on the iPad, the ability to delete photos from Photo Stream, and a new lock screen gesture that let’s you slide up to quickly access the camera. Safari also no longer opens bookmarks in new tabs or by default when all tabs are closed on the iPhone. The new iPad will also feature Dictation (but not Siri) through the keyboard so you can quickly compose emails or text with your voice. An interesting side-effect of upgrading on the iPhone is that a 4G icon will now be displayed on AT&T phones, even though the AT&T iPhone works on the HSPA+ network. For users downloading apps over wireless networks, the download caps have been raised to 50 MB in iOS 5.1 so that you’re more likely to be able to download upcoming Retina updates for universal and iPad apps. On the Mac side, iTunes was updated to 10.6 to take advantage of new 1080p content.

If you’ve had a chance to hop on the App Store today, you might have also noticed that every Apple app under the sun (or at least most of them) have updates today. With a new Retina enabled iPad on the way, these updates are getting minor improvements and Retina enabled graphics so that they shine on the new display. Most notably, look for updates to Apple’s entire iWork suite and apps like iTunes U.

More than a Name 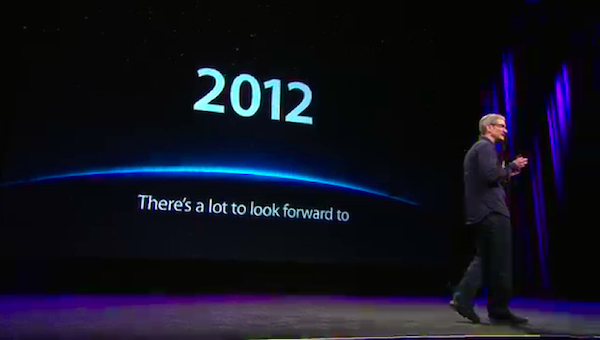 There’s much more to today’s announcements than just a name. Apple’s entire software ecosystem on iOS was updated to take advantage of the iPad’s Retina display. A new operating system update overhauled and tweaked key features on iOS for both the iPhone and iPad. The iTunes Store now offers 1080p content. It’s hard to really appreciate the labor (and the love) that went into today’s product launches, but if you couldn’t join your neighbors on the Internet to follow live event coverage, we hope our March 7th roundup got you up to speed on everything Apple announced and launched.