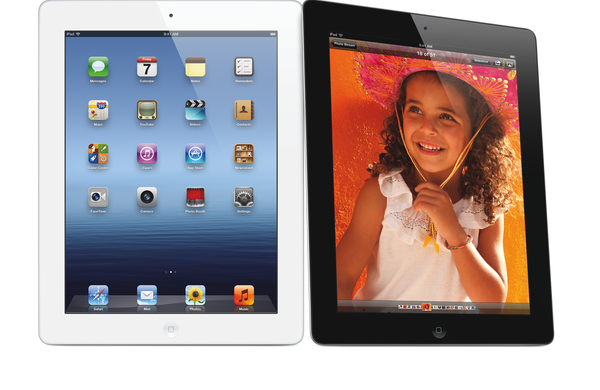 Yesterday’s Apple event was packed with information and new product releases. From a new iPad to software updates and a new Apple TV, March 7th can easily go down in the company’s history as one of the biggest rollouts ever, perhaps only second to October 12th, 2011. In this post, we have collected some miscellaneous tidbits and pieces of information that we missed or only briefly mentioned in our coverage of the event.

The Verge suggests the new iPad has 1 GB of RAM, as previously rumored:

One piece of information that wasn’t mentioned, however, was RAM. Sources have informed us that Apple’s latest has indeed received an upgrade in that area as well, and will ship with 1GB of RAM — double that of its predecessor.

The new iPad is using Qualcomm’s MDM9x00 Baseband, according to AnandTech:

Now that the restore .ipsw images have been posted and are available for download, I took a peek inside and did a little bit of forensics. It turns out that Apple has gone with Qualcomm’s MDM9600, and has given the device codename Maverick (as opposed to Trek for MDM6610). This part still contains UE Category 3 LTE, CDMA2000 1x/EVDO Rev.A (and B), GSM/EDGE, and WCDMA/HSPA+ all the way through DC-HSPA+ 42 Mbps. It’s a 45nm 13x13mm part we’ve seen in numerous other 4G LTE devices thus far.

Stephen Hackett at 512 Pixels was first to report that OpenStreetMap has wrote a blog post claiming Apple is using OSM’s data with no credit, but not the tiles:

The OSM data that Apple is using is rather old (start of April 2010) so don’t expect to see your latest and greatest updates on there. It’s also missing the necessary credit to OpenStreetMap’s contributors; we look forward to working with Apple to get that on there.

It looks like iTunes 10.6 now lets you keep apps on a device, if you don’t want to sync them with a computer.

Also new in iTunes 10.6: automatic conversion of songs to more bit rates. Obviously, unless you want to save space or are converting from a lossless format, transcoding music isn’t generally a good idea.

iTunes 10.6 was released yesterday, and there’s one new feature which will, I think, please a number of the readers of this blog. As you may know, when you sync an iPod, you can have iTunes automatically convert your music files to a lower bit rate, so you can save space on a portable device. Previously, the only choice you had was 128 kbps. But iTunes 10.6 offers three choices: 128, 192 and 256 kbps.

Square’s Louie Mantia has created a nice iOS app icon template that also works with icons for the new iPad.

AirPlay Mirroring on the new iPad continues to be 720p, but AirPlay video streaming is 1080p to a 3rd gen Apple TV, 720p to a second-gen Apple TV. Video mirroring and video out support 1080p.

Missing some movies from your new iTunes in the Cloud? CNET says Fox and NBC Universal will soon join other providers:

AllThingsD reported yesterday that Fox and NBC Universal are holdouts and that the reason has to do with exclusive licenses that those studios have with Time Warner’s HBO. This is the same contractual obligation that plagued the UltraViolet platform from signing some of the labels. HBO has exclusive licensing rights for electronic sales of films from NBC Universal, Warner Bros. and Fox. This is a minor holdup my film industry sources said.

As Shawn Blanc notes, the only way for Apple to give the idea of a Retina display is to make non-Retina screenshots look blurry and fuzzy.

As a sign of the times, the iPhoto for iOS app icon doesn’t contain a camera, but just a lens.

After updating to iOS 5.1, Japanese customers will be prompted to enable Siri. During the initial rollout, availability may be limited and Siri may not be immediately usable. 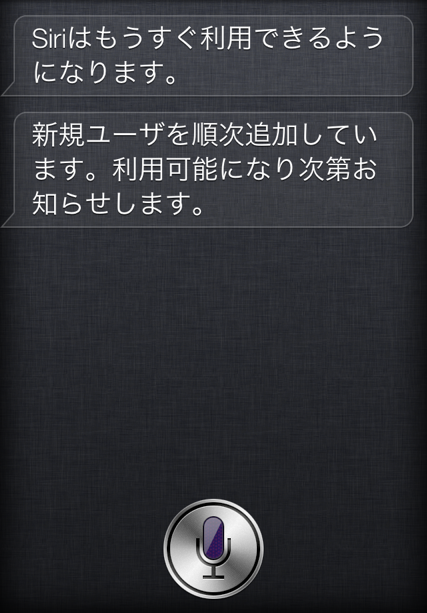 Apple is calling the new iPad in a variety of ways. On its website, the company uses “iPad”, “the new iPad”, “third-generation iPad” and “iPad (3rd generation)” depending on what section you are visiting. Apple PR says it’s simply called iPad. 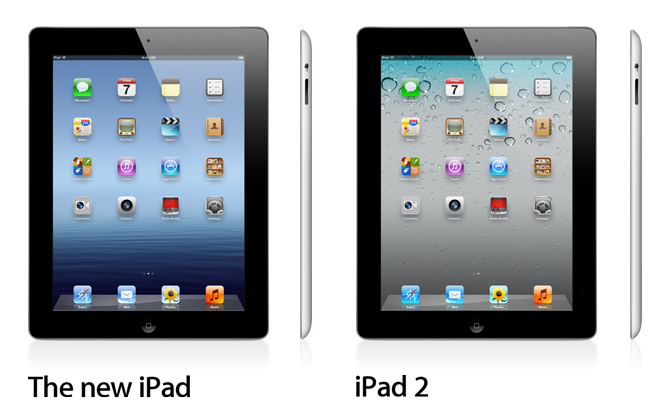 Unless they are calling it “the new iPad”, Apple (as usual) prefers to call the device “iPad” – without “the” – in almost every sentence. Example:

Now for the first time, you can share the high-speed data connection on your iPad. If your carrier supports it, iPad can act as a personal hotspot for connecting up to five devices — such as a MacBook Air, an iPod touch, or another iPad — over Wi-Fi, Bluetooth, or USB.

The new Apple TV has a single-core A5 chip.

Apple says there are over 200,000 apps for iPad, but the App Store (as of today) disagrees.

In case you missed it, you can catch up on our iPad keynote coverage with these links:

- This Is The New iPad: Our Complete Overview

- Apple Updates Most of Its iOS Apps for the new iPad

Today’s one of those days when I can sit happily at my desk and know that the tech press didn’t win. Despite the mounting evidence, the alleged photographs of bits and pieces, and the last minute rumors of x-chip and y-feature for a gadget we seemingly knew everything about, Apple still managed to pull a fast one that was so obvious it makes even the most certain journalists curse under their breaths. iPad. You should have seen it coming right? Even the iPad 2 was simply referred to as the iPad on its aluminum shell. iPad. Even if it was just a little surprise, it’s a simple reminder that not even those with the best sources can fully beat Apple at its own game. As long as this continues to be true, I’m pretty sure that means Apple is doing alright.

With that said, let’s check out all of the great stuff Apple just launched.

END_OF_DOCUMENT_TOKEN_TO_BE_REPLACED 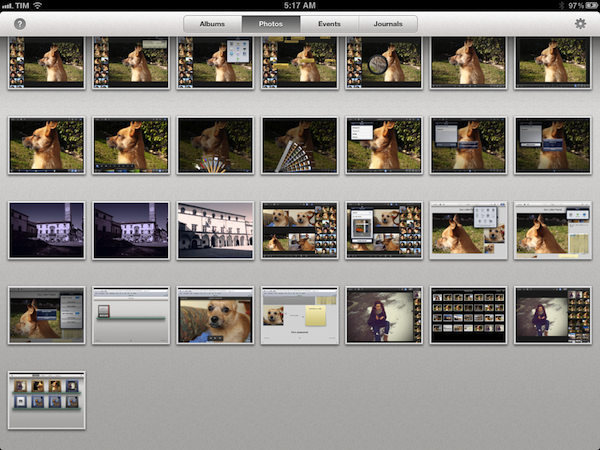 iPhoto for iOS was released on the App Store earlier today, and after an enthusiastic introduction at Apple’s media event in San Francisco, the latest photo editing app from Cupertino received a controversial “welcome” on various blogs and Twitter streams as users got their hands on the all-new interface and photo management system. So what’s all the fuss about iPhoto for iOS?

I have been trying the app on my iPad 2 and iPhone 4S (running iOS 5.1, of course, as it’s a requirement) for the past few hours, and I think that it is very powerful. As I’ll illustrate in a bit, Apple did manage to squeeze some advanced photo editing and refinement technologies in the mobile version of iPhoto, putting it on the same level if not above iPhoto for Mac when it comes to editing, making quick adjustments, and interacting with your photos. Once mastered, the new gestures and tap commands can be quite powerful, although the app can have a steep learning curve. I also believe, however, that iPhoto for iOS suffers from a serious file management problem, in that it’s the best example of iOS’ lack of a centralized file system where apps are able to easily “talk” to each other and share files or modifications to them.

I want to get this out of my system before I get to the (very) good stuff. If you were hoping to see Apple coming up with an effortless way of importing photos avoiding duplicates and manual management, well, I’m sorry, you’ll be disappointed with iPhoto for iOS. This version of iPhoto is yet another data silo that is self-contained, and won’t simply “sync” the changes it makes to photos out of its closed environment.

I say “simply”, because there are exceptions in iPhoto for iOS, as it doesn’t use the exact same system of iPhoto for Mac when it comes to finding photos on your device. Because iOS devices come with a systemwide “Camera Roll” that’s accessible by other apps, Apple engineers had to make sure iPhoto could access such location – and here’s where I started to run into issues. END_OF_DOCUMENT_TOKEN_TO_BE_REPLACED 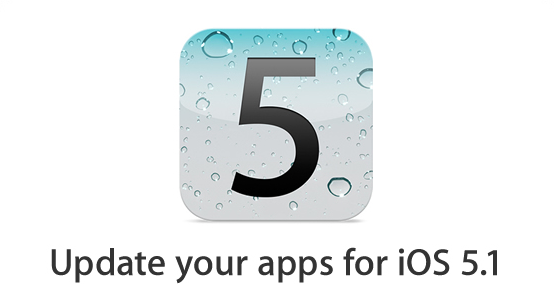 Following the release of iOS 5.1 earlier today, Apple has updated its developer portal with a new “Create Apps for iOS 5.1” webpage, asking developers to start submitting apps written specifically with the iOS 5.1 SDK. The checklist includes links to the iOS 5.1 SDK release notes, Xcode 4.3.1 for developers, and a detailed explanation of the various functionalities introduced in iOS 5.

iOS 5.1, the latest version of the world’s most advanced mobile operating system is now in the hands of millions of iOS customers. Install iOS 5.1 now and download Xcode 4.3.1 with iOS 5.1 SDK from the Mac App Store, so you can test and submit your iOS 5.1 apps today.

Developers can head over this page to check out Apple’s resources for developing and submitting iOS 5.1 apps.

Today, during Apple’s Keynote, they showed off updates for iWork, iMovie and GarageBand after revealing the new iPad. After the Keynote, many more of Apple’s iOS apps also received updates as well. All these updates are available now in support of the new iPad. Lucky for you we have the entire list (with direct links) for our loyal readers!

*Jam Session and iCloud are available on iPhone 4 or later, 4th generation iPod touch, and all iPad models. 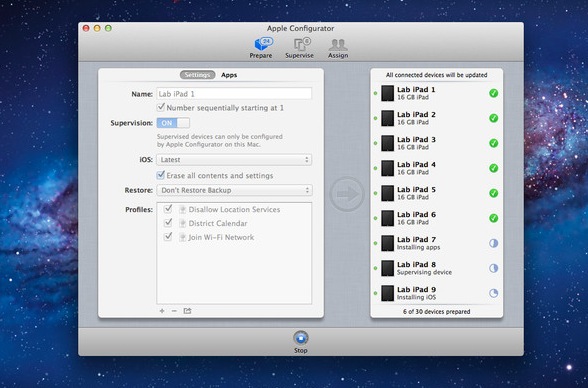 Apple has released a new free app on the Mac App Store, a utility called “Apple Configurator” to ease the mass configuration process of iOS devices for businesses and schools. Whilst the support page for the app still has to become available, it appears the app will allow those who are looking for a simple deployment solution to set Profiles for iOS devices, update iOS, install apps, and set restrictions. It’s certainly a welcome addition that confirms Apple’s focus in education, and in helping schools manage iOS devices and distribute applications.

Apple Configurator makes it easy for anyone to mass configure and deploy iPhone, iPad, and iPod touch in a school, business, or institution. 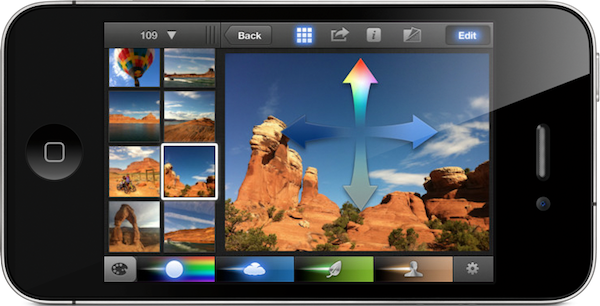 Available only for iOS 5.1 and announced during today’s keynote, iPhoto for iOS is now available in the App Store. With a size of 106 MB, the download isn’t below Apple’s bumped 50 MB download cap over the carriers’ networks. The iPhoto app for the iPhone and iPad completes Apple’s iLife suite on the iPad, joining iWork, iMovie, and Garageband updates that are also now available on the App Store.

Past the break you’ll find iPhoto for iOS release notes.

Update! We’re updating the post with screenshots past the break.

END_OF_DOCUMENT_TOKEN_TO_BE_REPLACED 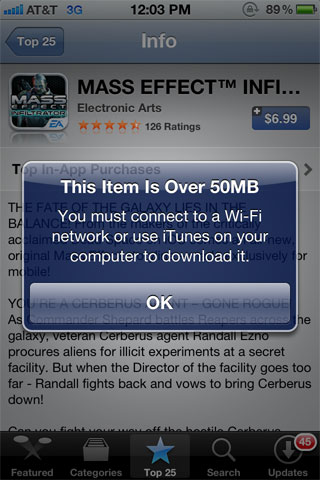 Apple has increased the over-the-air download size limit for the App Store to 50MB, from the previous 20MB. This only makes sense with cellular data networks getting faster speeds, especially with the launch of the new iPad, its Retina Display and 4G LTE data networks. The new iPad’s Retina Display will require its apps to have larger file sizes, thus the increase in download limits. This means that any app that is 50MB or less can be downloaded over the 3G or 4G networks.

The 50MB limit is now in effect, and applies to all kinds of media – music, video and apps. Now if the cellular companies would bring back “real” unlimited data plans!

[via MacRumors via AppAdvice]

Following today’s new iPad announcement, Apple has released a new version of iTunes, which reaches 10.6. The update is now available through Software Update, and will be up soon on Apple’s website. iTunes 10.6 brings the possibility to play 1080p HD movies and TV shows from the iTunes Store, and “many improvements” for iTunes Match, listed below. 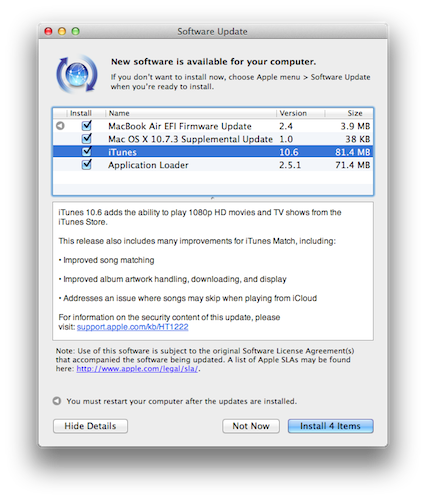 iTunes 10.6 is out now in Software Update.