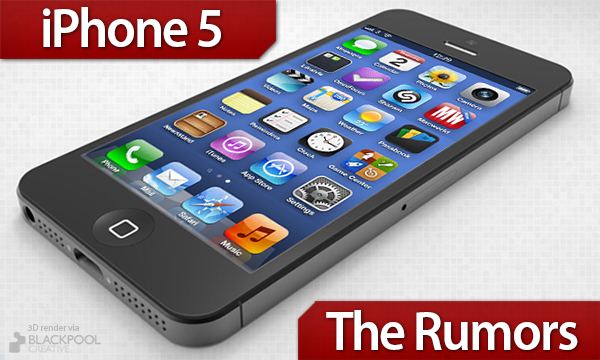 On Wednesday, September 12, Apple will likely announce the next-generation iPhone, rumored to be called “iPhone 5”. Initially reported by iMore in July, Apple’s September event will put the final word on what is believed to be the biggest upgrade to the iPhone’s line since the iPhone 4. And quite literally so.

Whilst CEO Tim Cook promised earlier this year to be “doubling down” on secrecy for unreleased products, a large number of alleged drawings, internal and external parts, and even software references have “leaked” in the past months, pointing to a device similar to the 4/4S family, but featuring a bigger screen. Moving to a taller screen would, supposedly, allow Apple to pose the iPhone 5 as a much more significant upgrade than the iPhone 4S (if only for the design alone), which, however, still managed to sell “fairly” well. And – again, based on ongoing speculation – a bigger display would allow developers (and Apple itself) to show more content to the users, enabling a new kind of experience for reading, browsing the web, playing games, and watching movies.

But it’s not just about the new screen. Below, we’ve assembled a timeline of sorts, organized by sections, linking to the most likely and popular rumors or leaked photos that have been posted to date.

While we don’t normally report on rumors that pop up on a daily basis, all signs at this point seem to suggest information posted online by various outlets is correct; recently, Jim Dalrymple of The Loop confirmed/denied a variety of rumors on the new iPhone. As Rene Ritchie of iMore wrote, while Apple could have spent some of its $100+ billions in the bank to orchestrate a complex series of “fake” leaks to create a “surprise effect” next week, they don’t have more time than anyone else on this planet, so the parts floating around – everyone seems to have one these days – are most likely accurate.

This, though, doesn’t mean we know how the next iPhone will be like. As you’ll see below, there are leaked displays, new dock connectors, motherboards, and even measurements, but this doesn’t necessarily imply we can be 100% sure this is what the next iPhone will look like. We can only attest with a certain degree of probability that, yes, Chinese manufacturers have given us a pretty good idea of what the new iPhone should be like, but only Apple can pull the curtain off what appears to be a major milestone for the iPhone’s product line.

So jump past the break, and check out the gallery of photos and links we’ve put together. Just don’t fall in the trap of believing this is all there is to the new iPhone’s story, because as we’ve learned in the past, there’s more to new Apple products than connector cables and leaked components.

The experience – how hardware and software integrate with the device – is still up for Apple to redefine next week. 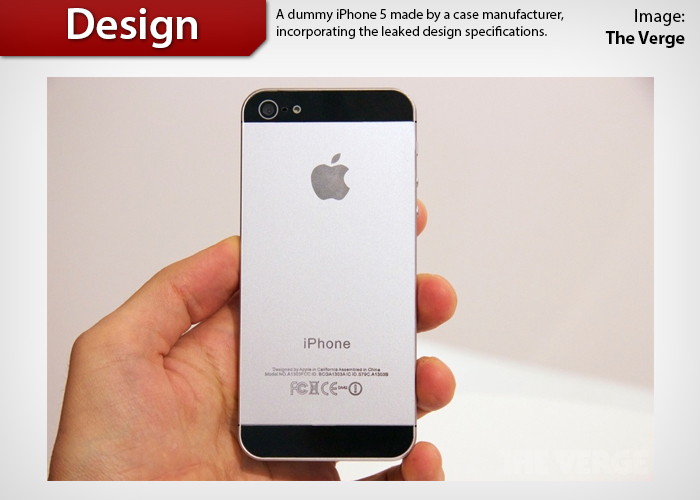 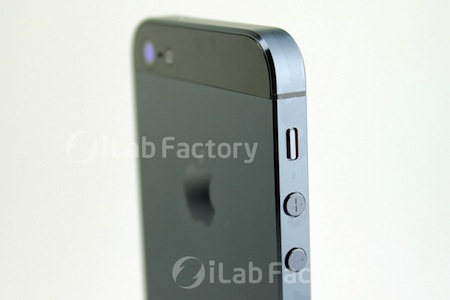 The design of the (leaked) iPhone 5 is at the same time both familiar and different. The front face in particular is largely the same, with the (big) exception being that the display has been stretched vertically to become 4” when measured from corner to corner, the other minor change sees the FaceTime camera centered above the earpiece. Yet perhaps the most notable change from the iPhone 4/4S design is the wrap around metal backing that features glass on the top and bottom. From what we understand, the metal backing makes the iPhone much stronger (whilst allowing Apple to make it even thinner) and the glass panes are to allow the various antennas to transmit without interference. The iPhone 5 is also thinner by roughly 2-3mm, which means it could be up to 30% thinner than the iPhone 4/4S. If you want to read more, I encourage you to read Don Lehman’s piece on the TechBlock where he took a very good look at the leaked parts to evaluate and explain the new design.

I think it’s for this reason that Apple has tinted the metal housing black. Clear anodized aluminum or buffed stainless steel would “pop” too much against the black, creating a visual striping effect. Tinting it black starts to integrate the materials a little more. Also helping: the chamfer that runs along the edge of the metal appears to be polished, as opposed to the side, which is buffed or sand blasted. The polished chamfer helps the edge look more continuous and will make this design appear to be even thinner than it already is. 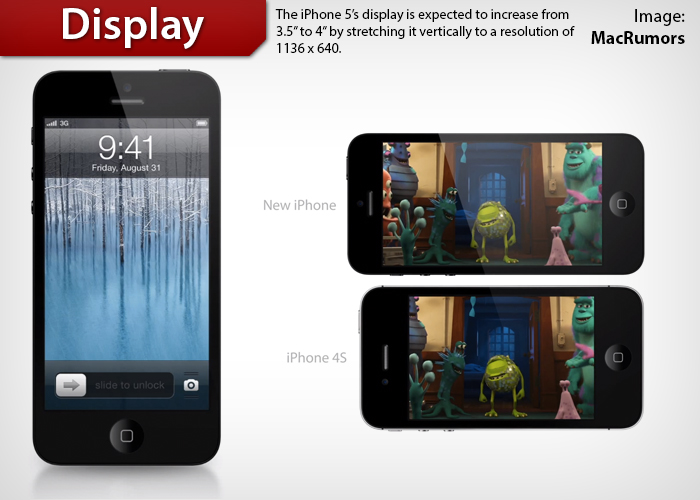 In essence, the display of the iPhone has been stretched vertically, going from what was 960 pixels high in the iPhone 4/4S to 1136 pixels high in the iPhone 5. The width of the display and the PPI (pixels per inch) will be unchanged. This will mean that you can fit another row of icons in the homescreen, show more tweets in your Twitter app of choice, and show less black bars when watching a movie. As the Reuters report explained, the display will also be thinner thanks to in-cell technology which allows the touch sensors to be embedded inside the liquid crystal display. 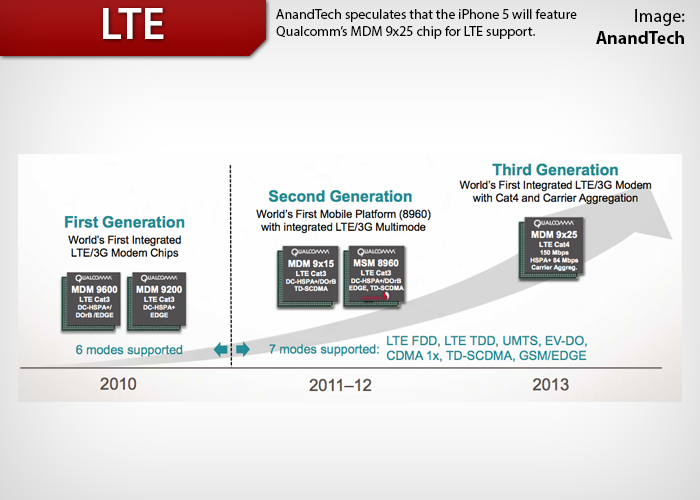 A year ago, when we were ramping up for the iPhone 4S launch there were similar rumors of LTE support, that didn’t eventuate - but it’s very likely to happen this time around. Virtually all of Apple’s competitors have, to some degree, adopted LTE and Apple themselves released the latest iPad with support for LTE. One real question yet to be answered is whether the LTE support will be limited to just a few regions like the new iPad is.

The big addition with the upcoming iPhone will be a massive and much needed improvement in cellular connectivity. Put simply, the addition of both support for LTE in the Americas and perhaps a few other international markets, and TD-SCDMA support for China.

The commercial availability of Qualcomm’s second generation Gobi modems and transceivers will make this possible without the design caveats posed by the previous generation of LTE basebands. 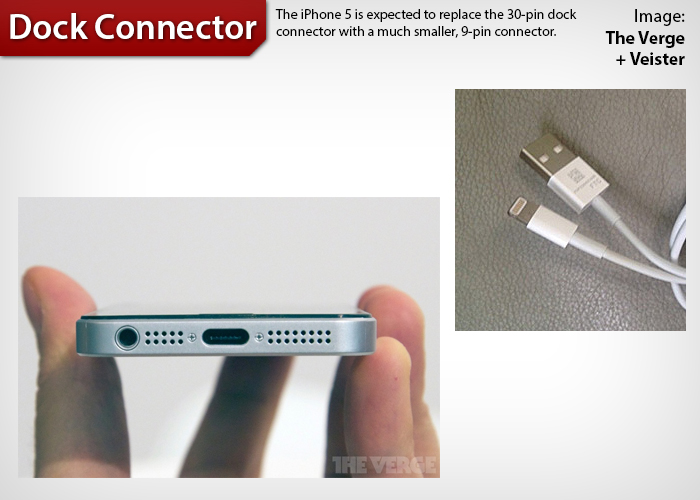 At this point, it’s still unclear whether the new dock connector will simply be smaller, or also offer other advantages over the old 30-pin one. Recent speculation has claimed Apple changed the connector to save space but also provide faster transfers between computers; for instance, Marco Arment suggests it’ll be based on USB 3, with a proprietary Apple chip the company can control and profit from. Amidst other, less-likely rumors, others are speculating the new dock connector might also be similar to the MagSafe, in that Apple could let users “snap” cables into place in either orientation. 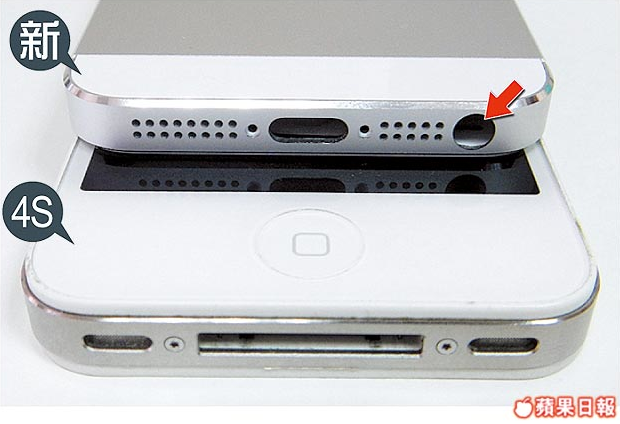 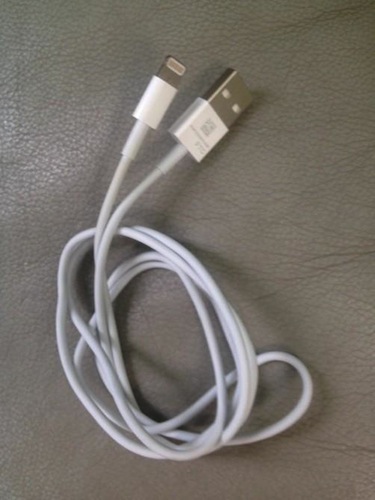 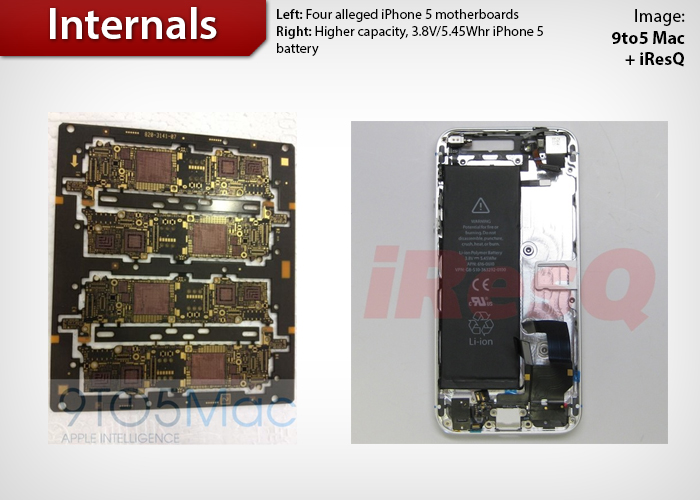 Guts: Processor, RAM, and Logic Board

It’s funny. As Graham said in our chat room, when Gizmodo got a hold of the iPhone 4 before its launch date, journalists had a confirmed real phone in hand and we knew less about how it was put together than we do about the next iPhone today thanks to supplier leaks. Inside the new iPhone is a rumored A6 chip (although no one seems to agree on whether it’s dual-core or quad-core). The Korea Times, a year ago, published an article that suggests the new processor is quad-core. As to expect with all of Apple’s iPhone refreshes, the guts are always tended to, even if the appearance of the phone itself doesn’t change. It’s suggested that the new iPhone will have more RAM (a full gigabyte of memory), a faster processor, and a Gobi chipset for LTE connectivity. NFC isn’t expected (which might not surprise anyone — the hint of its absence can be gleaned from Passbook’s reliance on barcodes in iOS 6). And of course, the battery is bigger than before. 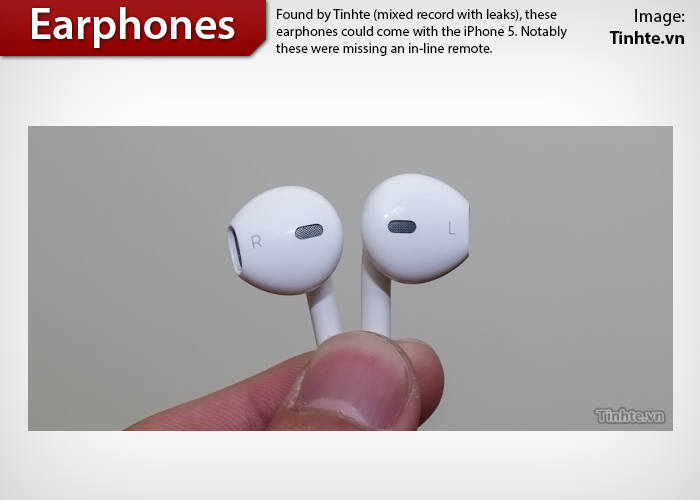 Tinh tế believes that the quality of the unibody headphones matches Apple’s excellence of construction, lending credence that these are legitimate Apple Earphones. A Remote and Mic component were not shown on the cable, although the headphones were well photographed. The headphones are reportedly more comfortable, thanks to the earpiece’s smaller teardrop design. There are multiple speaker openings on the headphones, with the two prominent openings being on the earpiece itself. While not specified, this makes one wonder whether Apple is utilizing dual drivers, or if the new design simply addresses comfort and maximizes volume in how it directs sound into the ear canal. This pair of headphones was manufactured in Vietnam (specifically at the Phax Co factory) as indicated by the label on the cable. Since the initial leak, no other details about these new headphones have been published.

Apple Earphones are often criticized for being poor in quality and sound. However, about a year ago (shortly after Steve Jobs’ passing), Tyll Hertsens of InnerFidelity wrote an article defending Apple’s ear-bud, claiming that Apple takes great care to design and mass produce what are arguably one the best ear-buds in the world (note: not in-ear). Hertsens’ professional conclusion comes after extensive testing, years of listening experience, and having talked to a lead product engineer for Apple Earphones. With this review in mind, it will be exciting to hear the added fidelity of Apple’s upcoming headphones.

[August 6th] MacRumors points to a set of photos by French site Nowhereelse showing a nano-SIM tray for the next-generation iPhone as opposed to the micro-SIM standard used in the iPhone 4 and iPhone 4S.

Update [September 7th] 9to5Mac claims the new iPhone, codename N42, will be announced at the same price points of the iPhone 4S.

Update [September 7th] MacRumors publishes an email from FedEx, which claims the company is making preparations for a “surge volume” between September 21-September 24, when the new iPhone is rumored to be going on sale.

A note on software: on June 11th, Apple unveiled iOS 6 at its WWDC ‘12 keynote. It seems likely that the next iPhone will come with iOS 6 pre-installed, perhaps adding some exclusive functionality (like Siri on iOS 5 for the iPhone 4S). iOS 6 is currently in beta with developers, and it’s safe to assume a Golden Master version will be released on September 12, with a final version to follow after a week before the new iPhone’s release.

As announced at WWDC, iOS 6 will feature:

For a complete list of the iOS 6 features to date, check out our original overview.