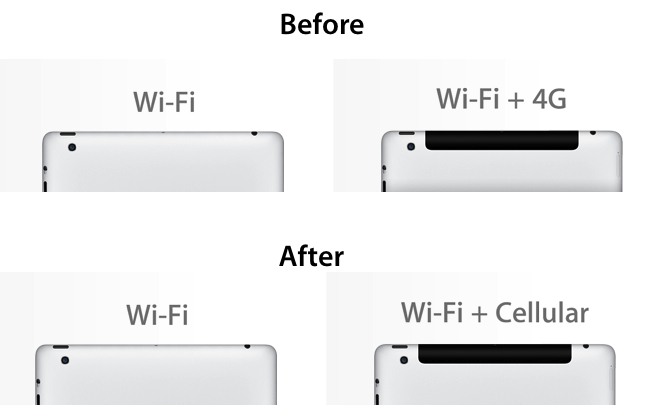 As noted by 9to5mac, Apple has started changing the “iPad WiFi + 4G” name to “iPad WiFi + Cellular” in some countries. Currently, the change is live on several international versions of Apple.com, including the US, UK, Australia, Canada, and Hong Kong. Other countries, such as Italy or France, still report the new iPad as “iPad WiFi + 4G” in the Tech Specs page of the product in what appears to be a gradual update of the device’s name. On the websites where the change has already taken effect, a version cached by Google shows the old “WiFi + 4G” product name.

The new iPad, available in almost 90 countries, comes with “4G” networking capabilities, albeit only in some countries, and on selected carriers with support for LTE. Because of Apple’s initial marketing of the device as “4G” regardless of country availability, the company came under scrutiny from Australian and UK regulators, who claimed Apple was falsely advertising the iPad as “4G” and misleading customers without properly specifying such feature was dependent on carrier support.

In Australia, Apple was forced to change its marketing for the new iPad by stating on its website the device wasn’t compatible with Australian 4G networks. In spite of the iPad still working with 3G networks, however, Apple decided to keep the “WiFi + 4G” name even after the initial clarification. This appears to be changing now as the company rolls out an updated product name across all its international websites.