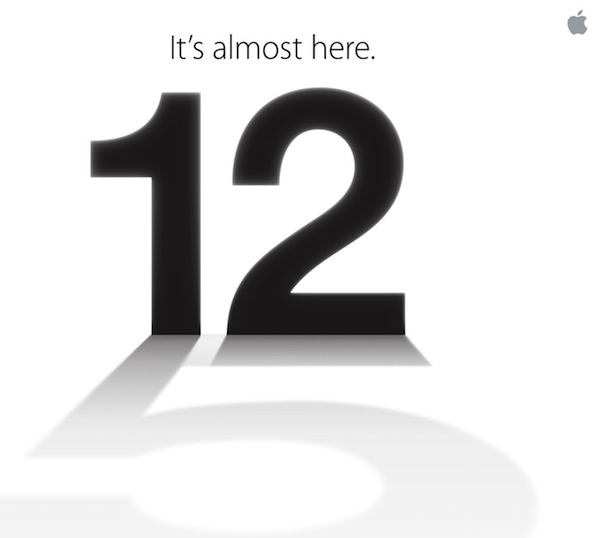 As first reported by The Loop’s Jim Dalrymple, Apple just sent out invitations to the press for a media event taking place on September 12 in San Francisco. The event will take place at the Yerba Buena Center for the Arts at 10:00 AM.

Apple is widely rumored to be introducing the next-generation iPhone at the event. As it can be seen in the invitation’s graphic, the shadow of the number “12” is a actually a “5”, suggesting the new iPhone will, indeed, be called “iPhone 5”. In recent months, there has been a lot of speculation as to whether Apple would call the new device simply “the new iPhone” (following “the new iPad” earlier this year), although some suggested “iPhone 5” would make more sense in terms of marketing considering the previous 4/4S monickers. However, others noted that, because the new iPhone would be the sixth generation model, the “iPhone 6” name would be more appropriate.

Obviously, the invite’s image is only a hint of a possible product name, but a strong one nevertheless. If previous invites are of any indication (see “let’s talk” as related to Siri last year), there’s a good chance the device will be called “iPhone 5”.

Lately, a lot of purportedly “leaked” parts of the new device have also pointed to a major redesign featuring a taller screen, thinner and lighter design, new speaker and dock connector, and more powerful A6 processor. iMore was first to report weeks ago about the future redesigned dock connector and September event. According to the website, the new iPhone should go on sale on September 21.

The next major version of iOS, iOS 6, is also currently being tested by developers, and it’s expected to become publicly available a few days before the launch of the next iPhone.