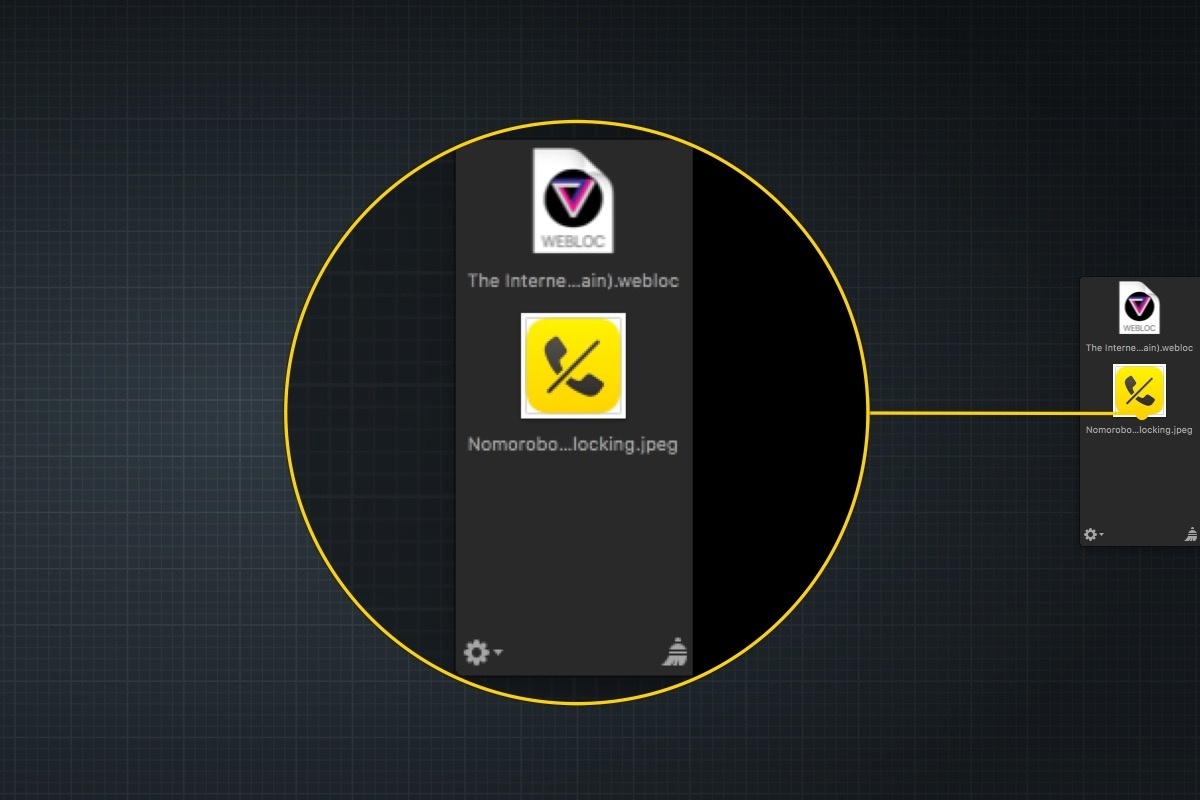 At WWDC, I was disappointed that the iOS 11 announcements didn’t include a shelf where content can be temporarily parked. When Federico and Sam Beckett made an iOS 11 concept video earlier this year they included a shelf, which felt like a natural way to make touch-based drag and drop simpler. I found the omission in the iOS 11 beta somewhat surprising. On the Mac, people use the Desktop as a temporary place to stash items all the time, and without a Desktop on iOS, a shelf that slides in from the edge of the screen seemed like a natural solution. In fact, it’s a solution that has an even more direct analog than the Desktop on macOS that makes a solid case for implementing something similar on iOS: Yoink, from Eternal Storms Software.

Yoink, is one of my favorite macOS utilities that sits just out of sight until I start to drag something. There are many days when I have a bunch of apps open across at least a few different Spaces. If I need to send a file1 to someone in Slack or attach it to an email message, those apps may be buried under several layers of windows, in a different Space, or may not be open at all. Instead of starting a drag and using Alt+Tab to find the app to drop a file into if it’s even open, I can drop it onto Yoink as a temporary resting spot until I find the destination for which I’m looking. This is especially useful when I’m using an email client and haven’t begun composing a new message yet.

As soon as I start dragging a file, Yoink fades into view. I have it docked to the middle of the right edge of my screen, but it can be anchored to the left edge too. You can also customize when Yoink appears. Instead of showing up as soon as a drag starts, you can set Yoink to wait until your drag approaches the side of the screen where it’s docked. You can even have a little Yoink window show up near your cursor as soon as the drag starts to minimize how far you need to move the file. As soon as you drop the file on the Yoink drop point, it re-attaches itself to the side of your screen.

Once a file is sitting on Yoink’s shelf, you can pin it there. I’ve begun doing this with a few files I need throughout the day when I’m working with MacStories and AppStories sponsors. After I pin the file, I can drag it out of Yoink and into an email message as many times as I want, which is faster than digging back through layers of folders in the Finder. If I don’t want to see it sitting there in Yoink on the edge of my screen all day, I press F5, which hides the Yoink window until I toggle it again.

There is a preview button next to each item on Yoink’s shelf that can be used to take a quick look at its contents. You can also share and open items using a variety of apps on your Mac by right clicking on any file stored in Yoink. If you decide you no longer need the files sitting in Yoink, click the ‘x’ button next to individual items or the broom icon to remove all of them at once. Right-clicking on Yoink or clicking its gear icon also gives you the option to bring back the last removed files if you clear out any by accident. 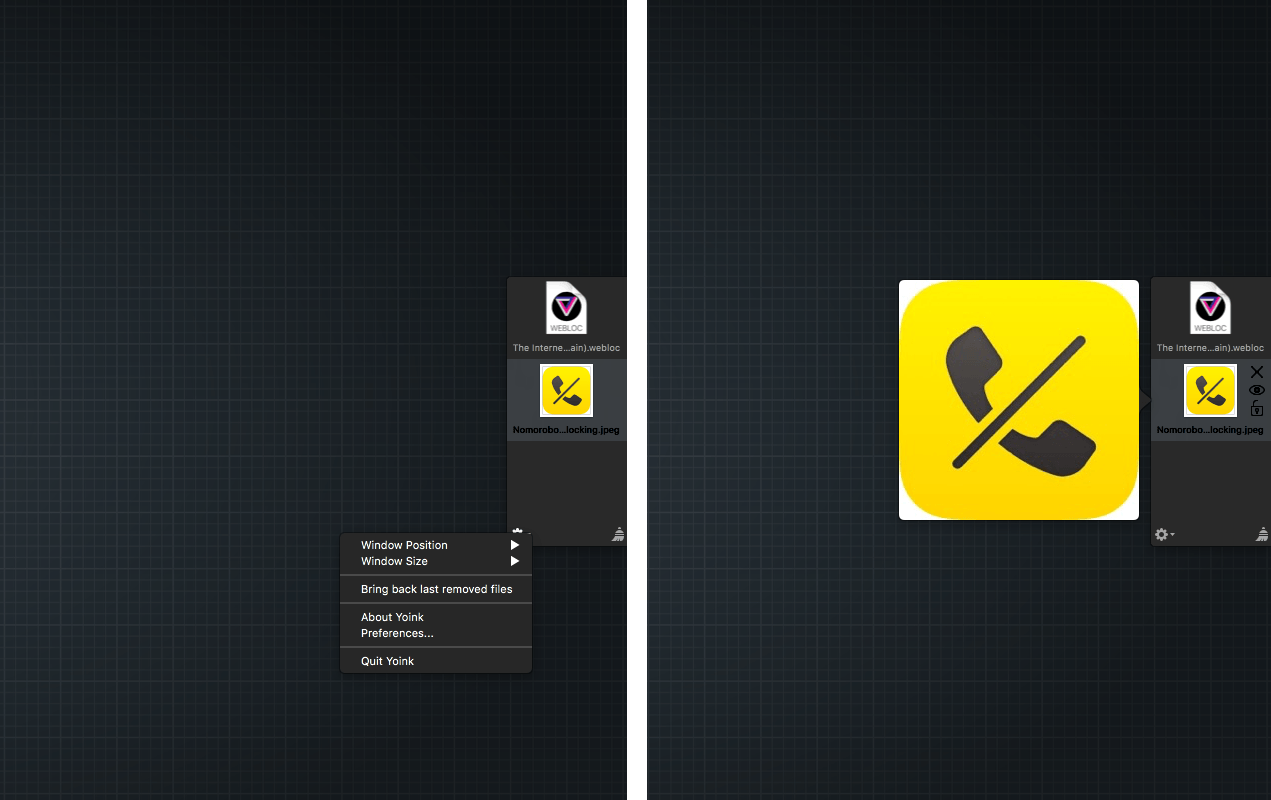 Multiple items dragged onto Yoink become a separate stack of files. Instead of a preview button, a split icon appears next to a stack, which unpacks the stack into separate items when clicked. Yoink also supports a customizable Force Touch gesture that can be set to select all the files in Yoink, reveal a file in Finder, pin and unpin the file in Yoink, or trigger the preview/stack-split button.

One final trick I like to use with Yoink is an Alfred workflow. It’s a simple workflow that deposits files found via Alfred onto Yoink’s shelf without having to take my hands off the keyboard. After triggering Alfred’s text field, I type a space, which triggers a file search. When I’ve located the file I want, I tap the right arrow key to reveal the available file actions. I pick Yoink, and the file magically appears on its shelf. The workflow is perfect for finding multiple files quickly. 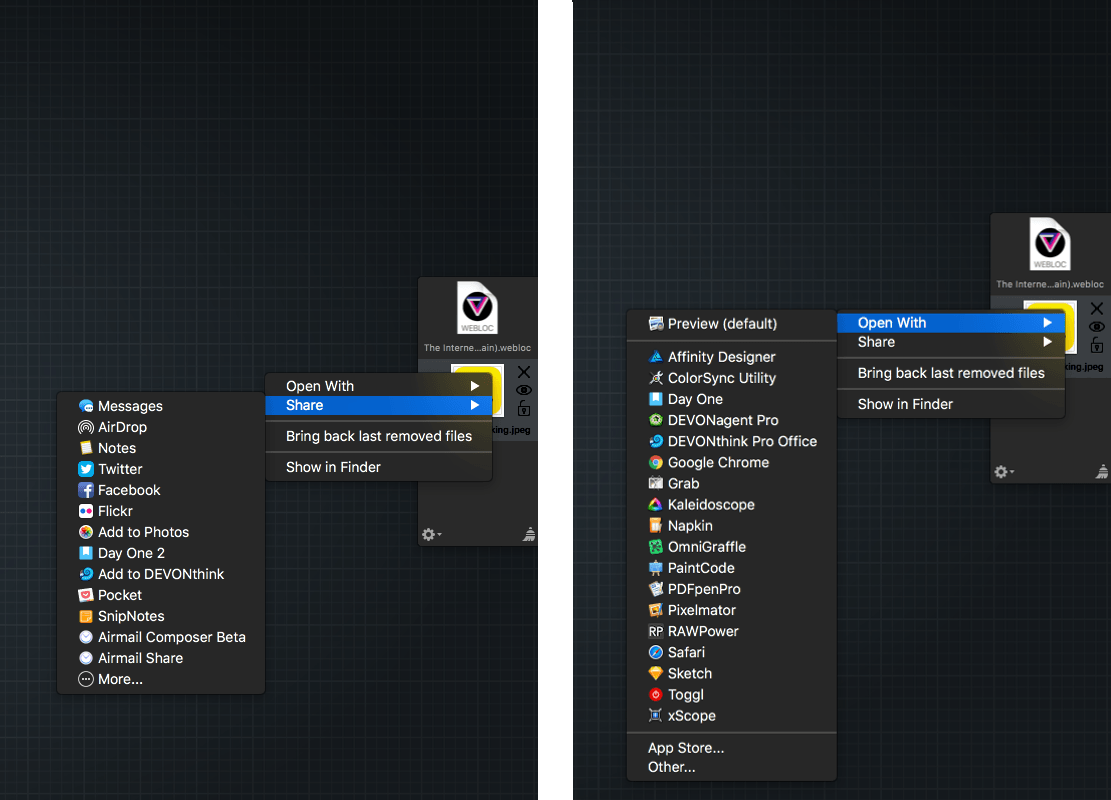 Sharing and opening in other apps.

Like a lot of utilities, Yoink isn’t something you need, but if you try it, you may find it’s something you want. Everything Yoink can do can also be done another way with the Finder, but it makes working with files on your Mac easier and faster. It’s a shortcut that saves seconds over and over, which adds up to real time over the course of weeks and months.

Yoink is also why I’m disappointed there’s no shelf in iOS 11. Dragging files around iOS 11 is a two-handed operation not unlike grabbing a file on macOS and maintaining the drag until you find the destination you want. As a result, it’s not surprising that iOS drag and drop works the way it does, but iOS 11 is an opportunity for a fresh look at how files are moved across the OS and to improve the way it’s accomplished. It doesn’t look like that will happen this year, but I’d love to see Apple take a cue from Yoink and implement an iOS shelf someday. Until that happens, I’m optimistic that we’ll see third-party developers tackle the problem.

Yoink is available on the Mac App Store. If you want to try the app first, you can download a trial version from Eternal Storms’ website.