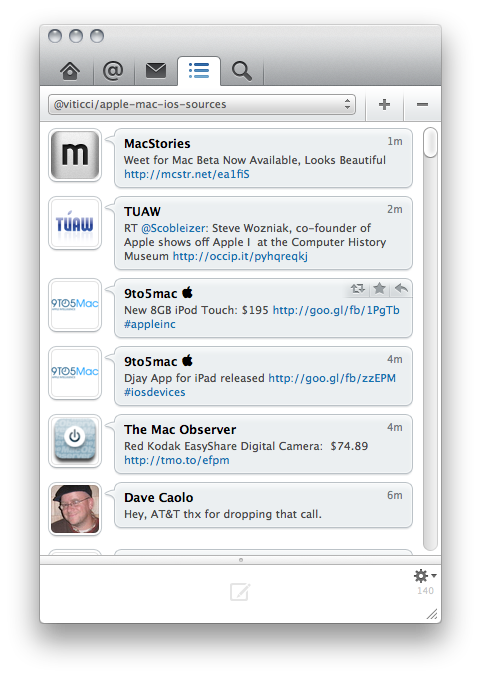 Weet for Mac was released yesterday as a first beta, and it quickly made the rounds of the internet as dozens of blogs covered the app, and thousands of users went ahead and downloaded the beta hosted on Droplr. It seems like until Loren Brichter comes out with his long-awaited Tweetie 2, there’s a real, tangible need of Twitter clients for OS X.

My guess is that, plain and simply, Tweetie still manages to be the best desktop Twitter client for many users. Sure it doesn’t support native retweets, it hasn’t got support for Lists yet and it hasn’t been updated in months – but the interaction and navigation methods developed by Brichter are still far superior than most clients available on the Mac.

That said – we don’t want to write another Tweetie-related post here – let’s take a look at Weet. It’s a first, rough and not-so-stable beta, but I think that it gives us an idea of things to come in this app, the path the developers have chosen with the app’s interface and the overall feeling.

I think Weet looks really good and provides an uncluttered, minimal and elegant way to access Twitter on the desktop. As I already wrote yesterday, I like the shades of blue implemented by designer Marcelo Marfil and, all in all, Weet looks as cute as its iPhone counterpart. I like the icons in the top toolbar, I like the blue indicators for new tweets – I just don’t get the huge scrollbar the developers put in the timeline. It looks awkward. And I also have to say, now that I’ve gotten used to iOS Twitter clients like Twitterrific and Twitter for iPad going back to a desktop app with chat bubbles in the timeline kind of feels weird sometimes. Tweetie for Mac features chat bubbles, but they’re different. Overall, Weet for Mac looks really nice and the app can only get better from here.

What I’d like to focus on is the functionality of this client. Many users last night lamented the lack of Twitter streaming API support in this first Weet beta, I don’t really think that’s a problem. At least not for me. I’m sure the developers will play around with the idea in future versions of the app, but as it stands now I’m not missing real-time streaming for tweets on the desktop. Weet allows you to refresh with Cmd + Shift + R but, as usual in any Twitter app for Mac I try, I assigned a BetterTouchTool gesture to it. Weet for Mac is really simple in the way it lets you switch between timeline, replies, messages and lists. A manual refresh via keyboard shortcut or gesture is fine to me. 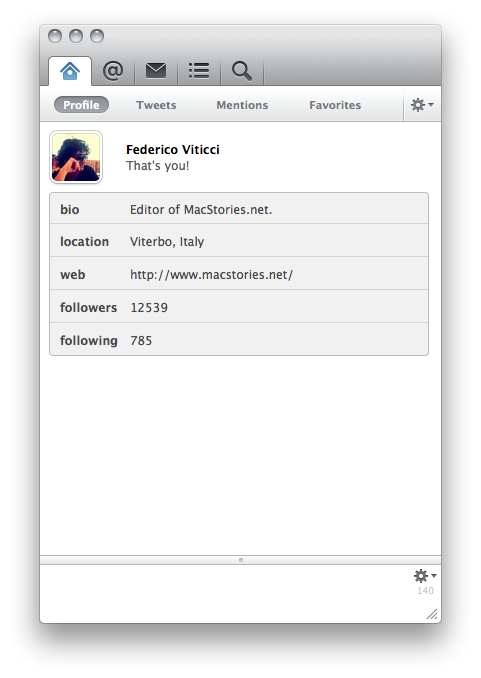 Tapping on profile picture in the timeline opens a profile view inside the app. From this view you can check on a user’s followers and following count, view his profile image (Weet treats inline images just like Tweetie does) or read his tweets, mentions and favorites. To do this, you’ll have to click on elements placed in a bar below the main navigation tabs. Clicking on the gear icon in the top right corner enables you to follow / unfollow a user, send a DM or reply, add to a list, block, report and mute. Weet for Mac does indeed come with “mute username” and “keyword block” functionalities in the settings – a very welcome option users like @justin (not Bieber!) will surely appreciate. I’m a fan of these filtering options in Twitter clients.

My main doubts about Weet are in regards of its overall feeling. Maybe it’s a mix of early beta bugs, iOS-like design and the fact that I’m still addicted to Tweetie, but the app feels strange to me sometimes. For instance, a refresh doesn’t trigger my replies: I have to restart the app to check on my latest replies. Ok, that’s a beta bug. The app doesn’t save my position in the timeline (for when I want to check out tweets posted at night while I was sleeping); there’s no support for Growl notifications; the developers implemented a window-max height which doesn’t let me resize the app as much as I want on my iMac; there’s no way to start a new tweet with a keyboard shortcut, and the tweet compose window is attached at the bottom of the app. Most of all, I don’t like the fact that I can’t go back to the main timeline with a single multi-touch gesture. Say I open a conversation by double-clicking on a tweet, I won’t be able to go back to the timeline unless I click on the tab or hit the Escape key.

I think Weet for Mac is a very promising client with a really nice interface, but I can’t use it as my default desktop Twitter app for now. For as much as I love trying new things, Twitter is too much of a big deal for me to stick with an app that presents many bugs and needs a lot of refinements. I know, it’s a beta and the developers need time.

For this reason I know we should keep an eye on Weet, looking forward to a final version that will hopefully address my initial issues and complaints.