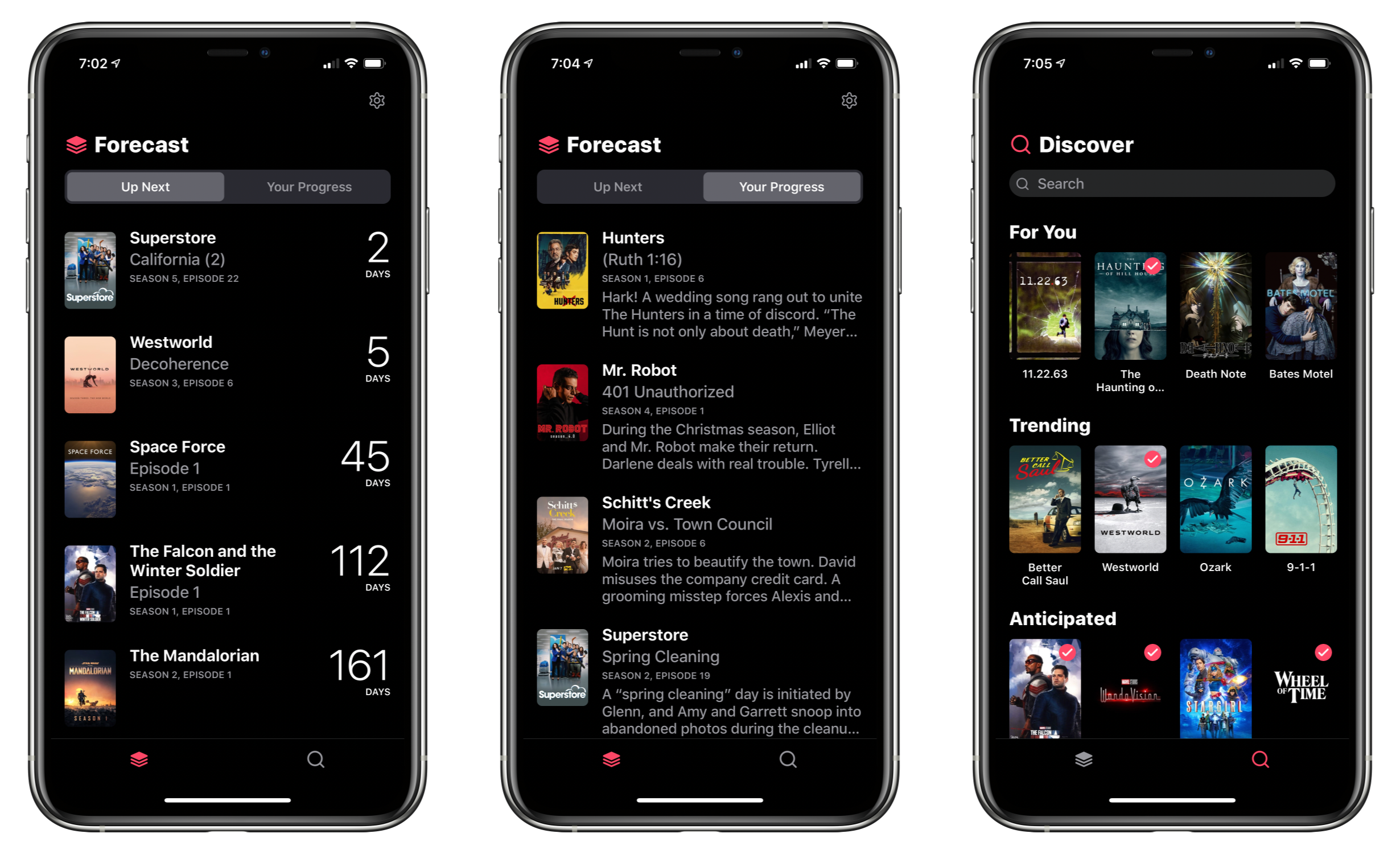 TV Forecast is organized exactly how I watch TV. Most of the time, I sit down to continue watching a show I’ve already started, which is handled by the app’s Forecast tab. The rest of the time, I’m looking for something new to watch, so I head to the app’s only other tab: Discover. 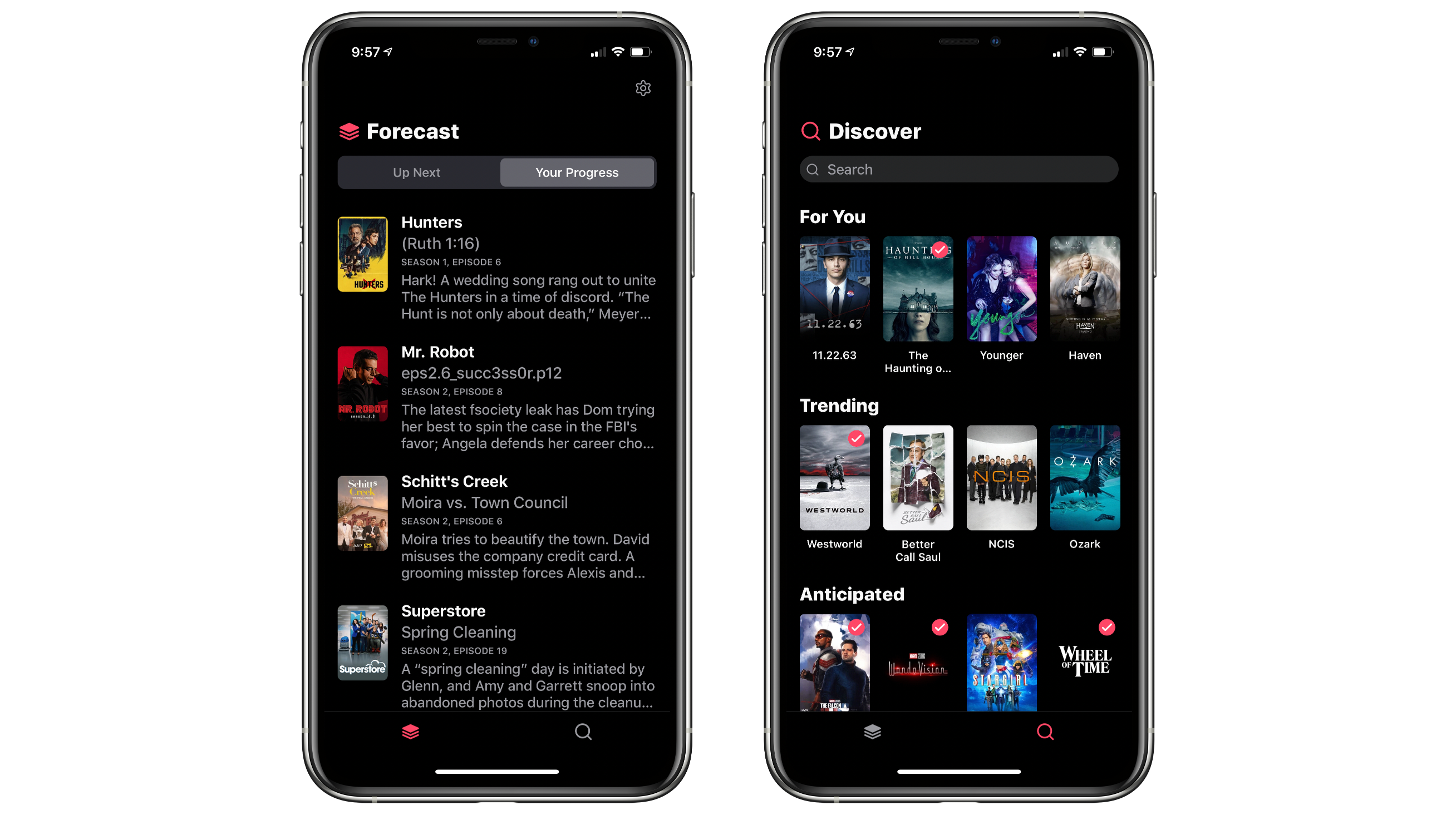 TV Forecast’s two-tab approach is at the center of what I like most about the app.

It’s hard to understate the importance of this initial design choice. TV Forecast’s two tab approach anchors the user experience, allowing you to dig deep to explore shows while providing an easy way back to where you started.

Of the two tabs, I spend the vast majority of my time in Forecast. There’s a segmented control at the top of the screen that divides Forecast into Up Next and Your Progress. It’s a sensible dividing line between episodes that haven’t been released yet and those that have. 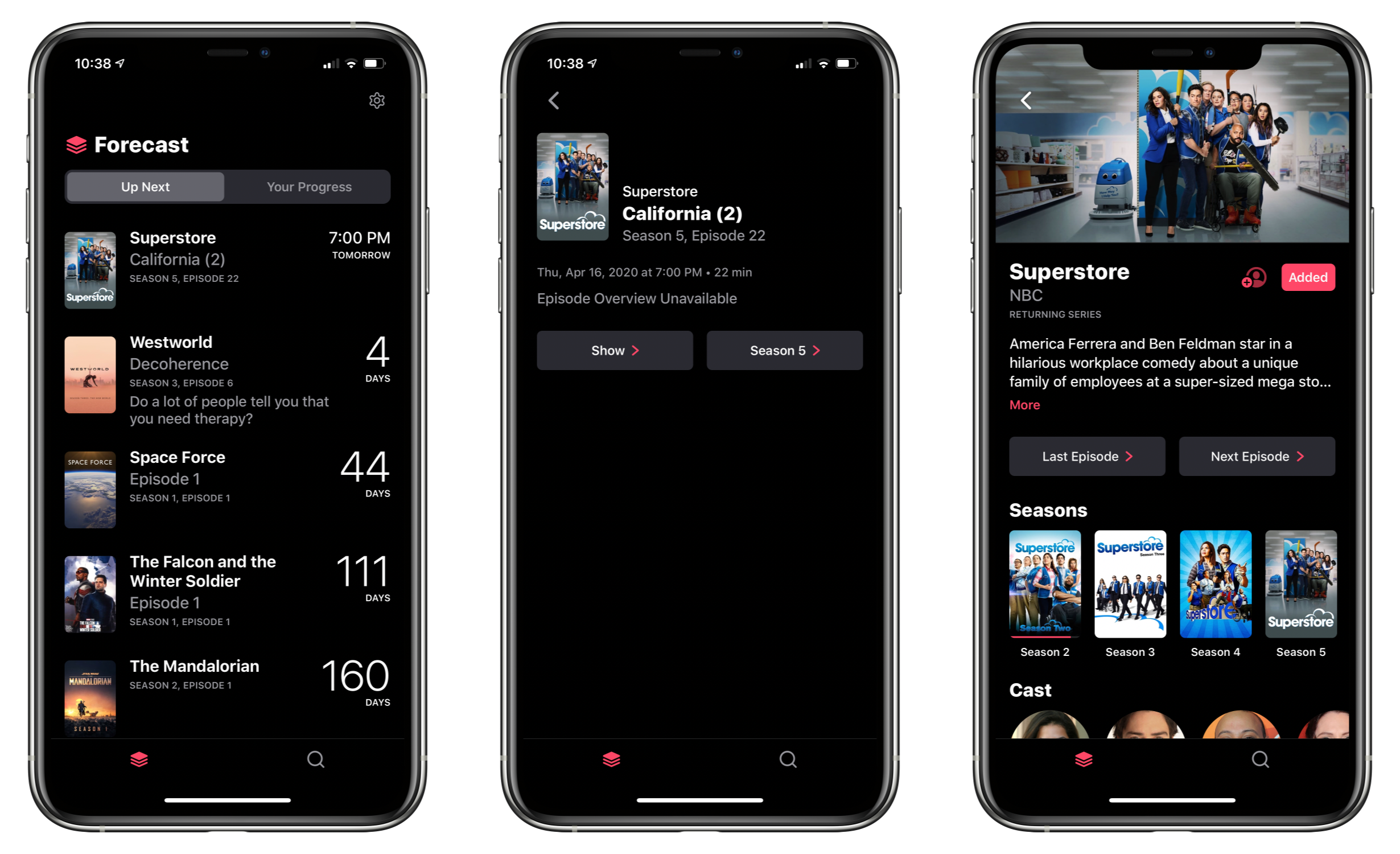 Navigating a show from TV Forecast’s Up Next view.

Up Next lists each show with a scheduled release date and the number of days until it’s available. In the app’s settings you can create alerts for new episodes anywhere from 5 minutes to 1 day before or after the show is available. Any shows that don’t have scheduled episodes are listed in a horizontally-scrolling strip of show art at the bottom of the screen under To Be Announced. Beneath that is another list of shows that have ended. Tapping the entry of any show takes you to a view with additional details about it.

I watch very few shows in real time, so I spend most of my time in the Your Progress section of Forecast. One nice touch is that the app remembers whether you were last using Up Next or Your Progress, opening to the same subsection the next time you return to the app. Your Progress is an alphabetically sorted list of all the shows you follow that have unwatched episodes. Any shows where you’ve watched everything available is listed in a separate Up To Date section at the bottom of Your Progress. 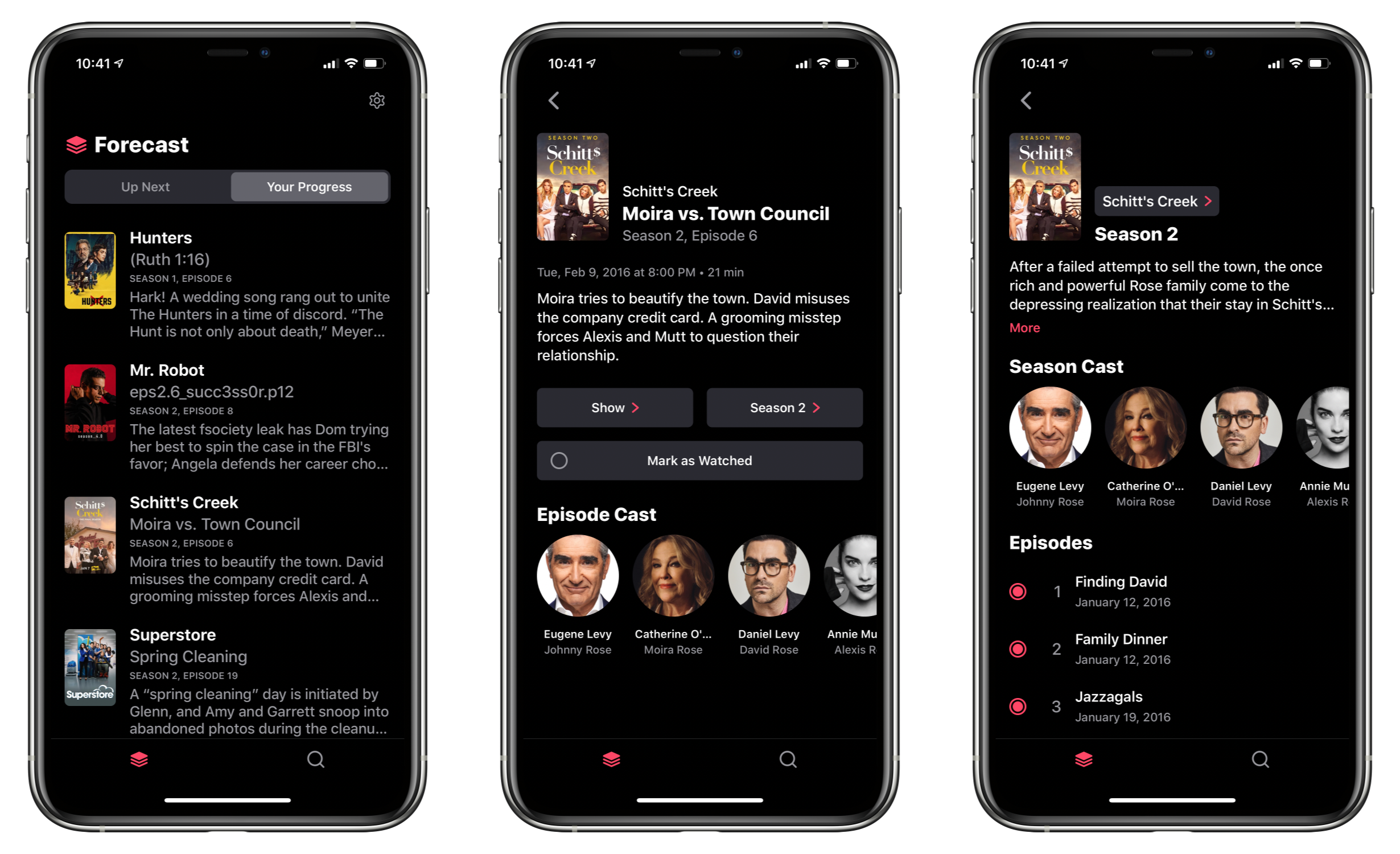 From the Your Progress view, it’s easy to access the latest unwatched episode or dig into the show or season views.

This top-level Your Progress list serves as a quick access point for managing episodes. Beneath the show’s name is the title of the next unwatched episode along with a truncated overview of the episode, which you can view in full by tapping on the episode. You can also long-press on an entry in the Your Progress list, which opens a context menu from which you can mark the episode as watched, go to the show’s overview screen, go to the season for the episode listed, or remove the show from your queue. For shows I’m in the middle of watching, this is by far my most frequently-used view. I start an episode, long press it in TV Forecast, and mark it as watched; it couldn’t be any easier.

Tapping on a show opens a more detailed view with a summary of the first unwatched episode available. The summary includes show art, season, episode, and title information along with narrative summary and buttons to take you to the show’s or season’s overview screens and mark the episode as watched. At the bottom, there’s a cast list too.

A show’s overview screen serves as its home base. From here, you can add the show to the ones you follow, read a description of it, view the cast and ‘related’ show recommendations, or tap on a season’s artwork to open its overview. One design touch I love is the subtle red progress bar beneath each season’s artwork. Especially if you’re watching a show out of order, it’s a great way to quickly find unwatched episodes. 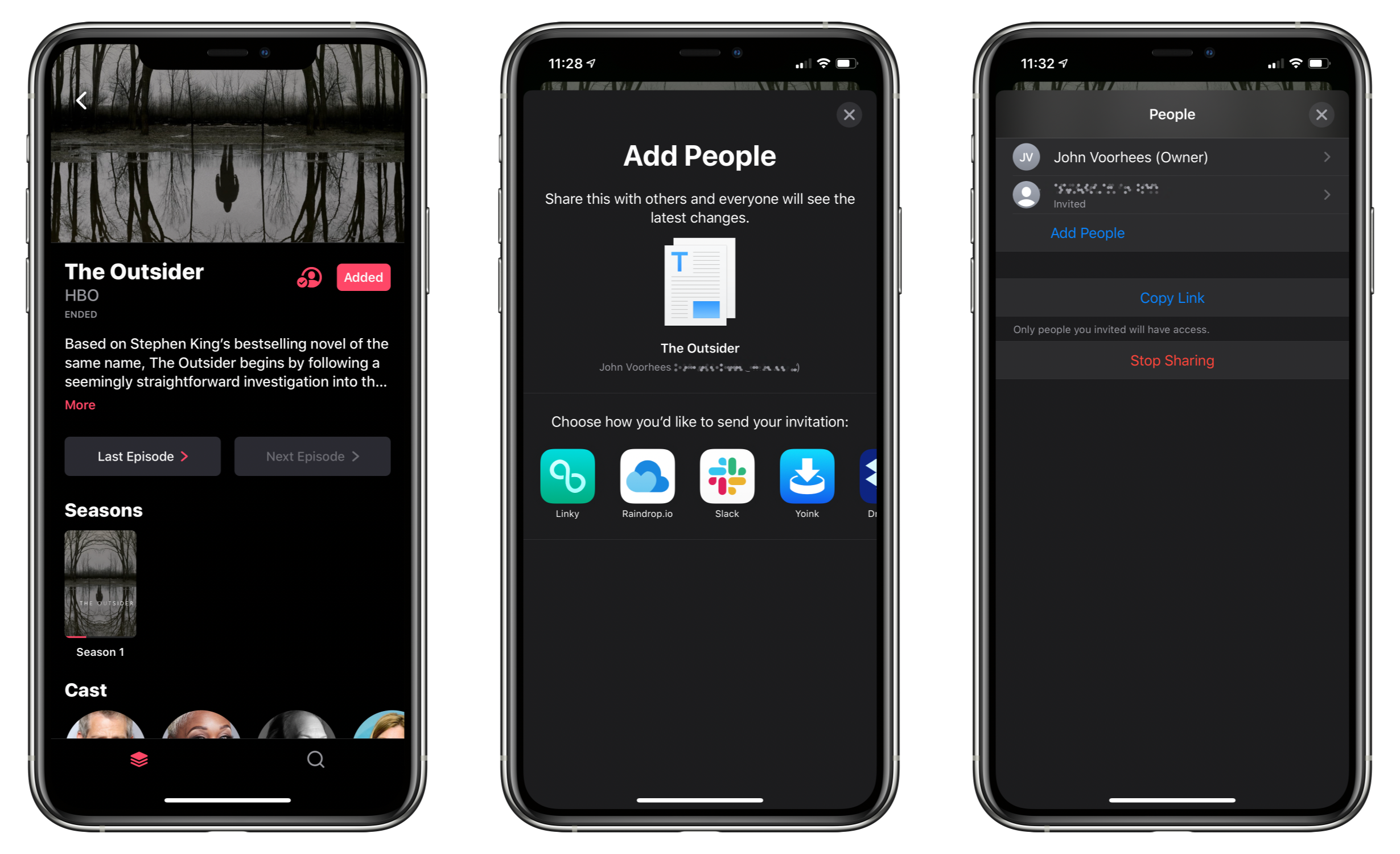 From a show’s main view, you can add it to your queue and share it with others.

Each show’s overview screen also includes an Add People button. You’ve probably seen this sort of feature in apps like Pages and Numbers where it’s used to share documents. The idea is the same in TV Forecast. Share a show with someone and your progress is shared with them in their copy of TV Forecast. If either of you checks off an episode as watched, it’s reflected in both of your copies of TV Forecast. Adding people to shows isn’t a feature that I’ve used except for testing purposes so far, but in these stay-at-home days, I think it could be a fun way to remotely share a common experience with friends and family.

Seasons have dedicated detail views too, with a synopsis of the episode, cast list, and episode list that includes radio buttons checking off any episodes you’ve seen if you’ve already added the show to your queue. For shows with a lot of seasons and episodes that I’ve already watched, I appreciate the fact that TV Forecast lets me batch-mark them as viewed by long-pressing an episode, which pops up a context menu to mark every episode to that point as watched or unwatched regardless of whether there are multiple seasons. The feature is also a great way to unmark watched episodes when you want to rewatch a show. 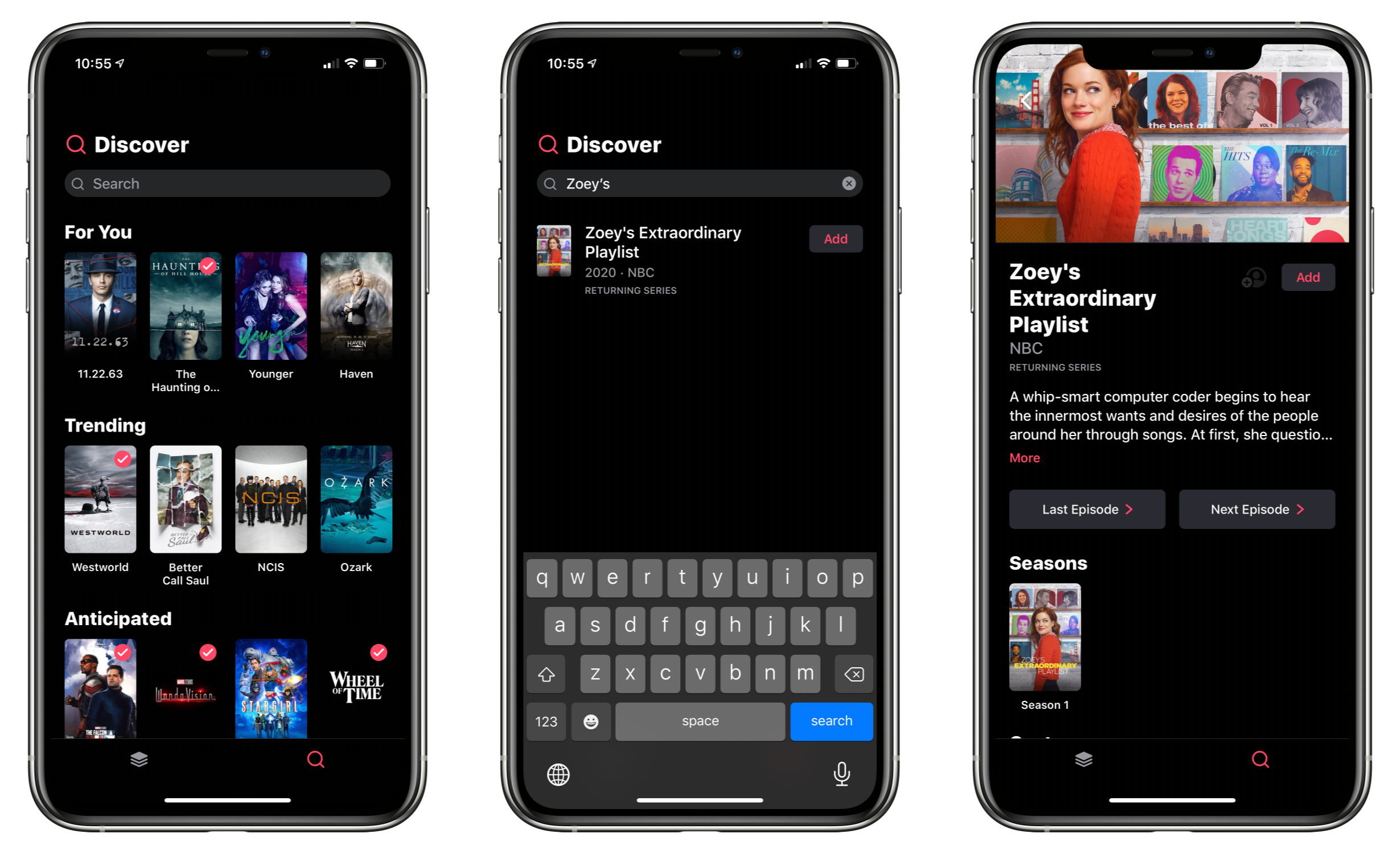 From Discover, you can see shows that have already been added and add new ones directly from the search results.

Under the second tab, you’ll find the Discover section. Here, you’ll find For You recommendations if you’re signed into a Trakt.tv account, Trending, and Anticipated shows for when you don’t have a show in mind and want to browse for something new. Of course there’s also a search field for looking up shows you’ve heard about elsewhere. If you come across a show that you already follow, it’s indicated with a checkmark on the show art.

TV Forecast’s settings are accessed by tapping the gear icon at the top of the Forecast tab. From here, you can also turn on syncing with the popular Trakt.tv service, switch between dark and black themes, and turn off episode overviews if you want to avoid spoilers. 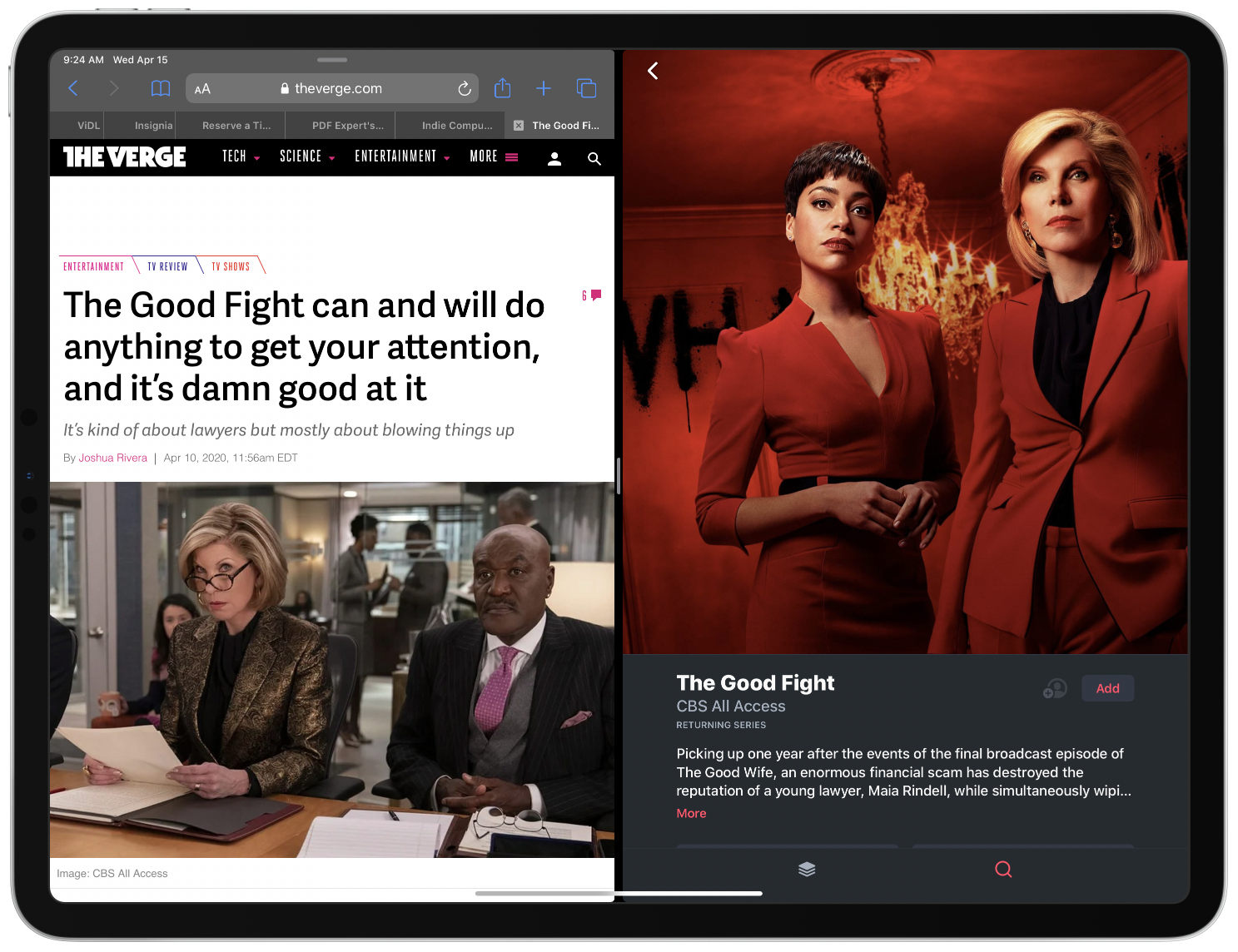 TV Forecast in Split View is a great way to add shows while reading reviews.

It’s worth noting that TV Forecast is also available on the iPad where it supports Split View and Slide Over, but not multiwindowing. The vast majority of my use of TV Forecast has been on my iPhone, which is less intrusive when I’m relaxing on the couch watching TV. Still, there’s a place for the app on the iPad, especially for times such as when you’re reading about new shows in a browser side-by-side with TV Forecast in Split View. When I’m reading about new shows, I’ve found this setup perfect for quickly adding them to my queue. 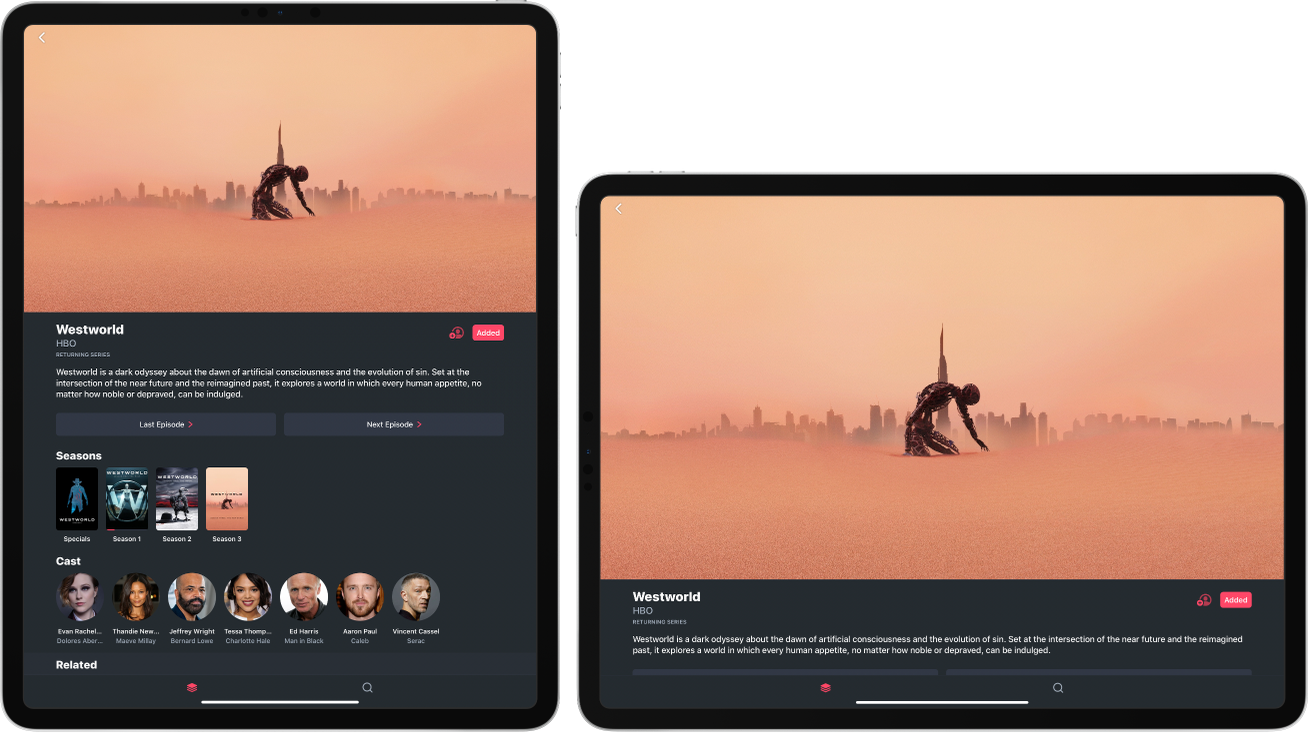 TV Forecast works best in portrait mode when viewed fullscreen on an iPad.

Overall, TV Forecast’s design works best on an iPhone or an iPad in portrait mode. Viewed fullscreen in landscape mode on an iPad, the app feels a little too spread out in places and show art takes up most of the viewable area of a show’s detail screen. Personally, that hasn’t been an issue for me though, because the few times I use the app on my iPad, I use it in Split View.

By this point, I’m sure it’s apparent that TV Forecast is a feature-rich app. If you’re in a browsing mood, it’s easy to get layers deep into shows using search and after tapping on cast members and related show recommendations. Despite that, though, TV Forecast remains firmly anchored because with a single tap on the Forecast or Discover tabs, you are immediately taken back to where you began. The depth of exploration possible is also balanced nicely by the ability to manage the shows you already follow from the top-level lists without digging any deeper.

When I stopped to consider what it is about TV Forecast that has made it stick for me in a way that no other TV tracking app has, I keep coming back to its balanced design. It has a simple elegance that makes tracking shows feel effortless and natural. For supporting an activity that I use as a relaxing escape, that’s exactly the type of app I value. When all I want to do is quickly check off a few episodes or add a show that a friend recommends, I can. Just as easily, though, I can wander from one linked show to another discovering new ones along the way. It’s that balance between utility and exploration that makes TV Forecast my favorite TV tracker.

TV Forecast is available on the App Store for the iPhone and iPad. You can track up to five shows for free. Unlimited show tracking and syncing via Trakt.tv is available with a $0.99/month or $9.99/year subscription. Alternatively, you can unlock the premium features with a one-time payment of $24.99.