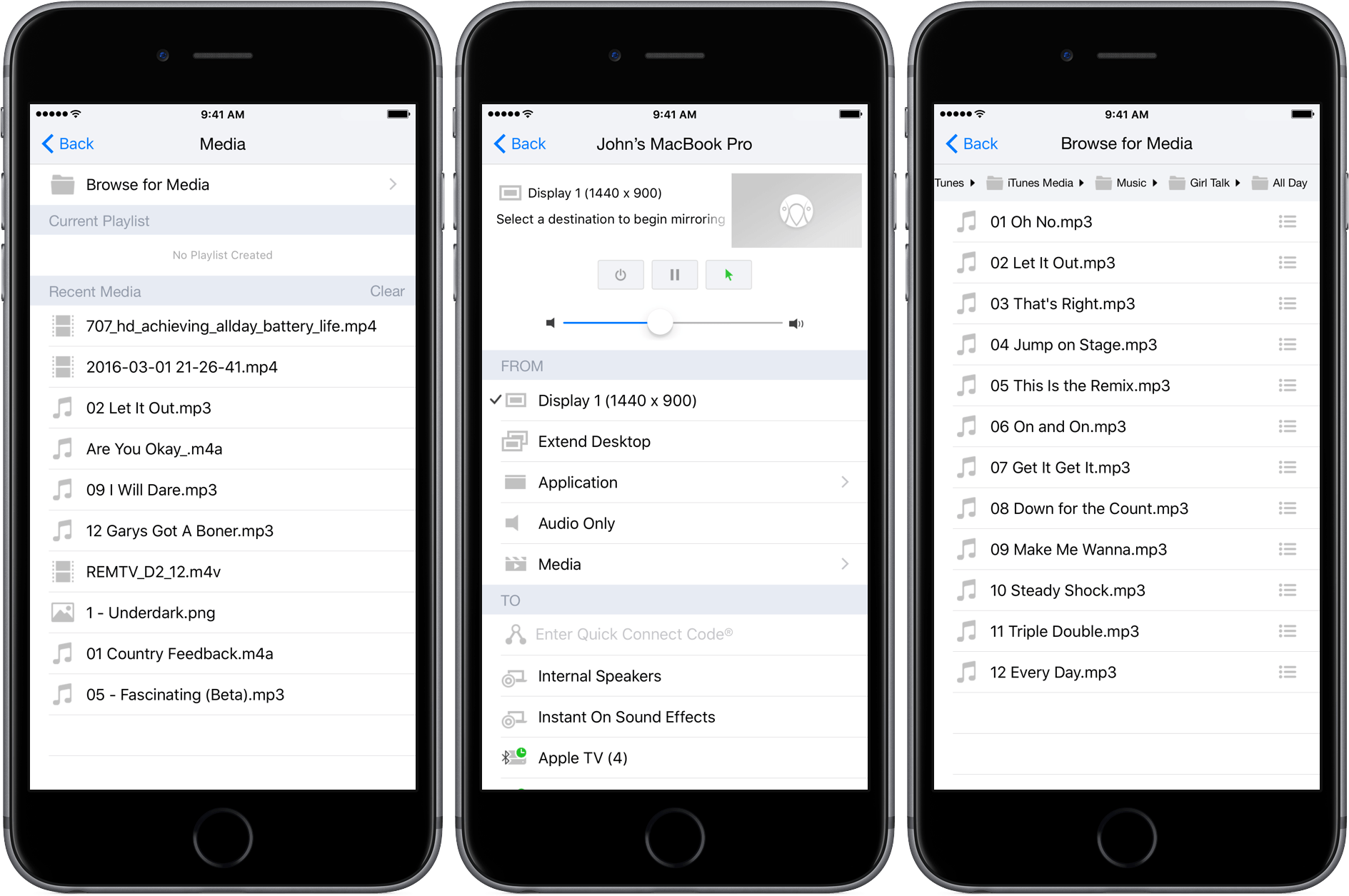 Shortly after reviewing AirFoil for Mac, which acts as a hub for routing audio to multiple devices and has an iOS remote control app, I heard that Squirrels was planning something similar for its AirParrot product. AirParrot 2 for Mac acts as a hub for sharing your Mac’s screen, apps, and media to devices like the Apple TV. With an update to AirParrot and the release of AirParrot Remote for iOS, you can now control the streaming of your Mac’s screen, apps, and media remotely from your iPhone or iPad.

AirParrot is a menu bar app that is broken into three sections. The first includes universal controls that let you play and pause streaming from your Mac, control volume, and disconnect from a source. The second section lists the things you can stream from you Mac – your display, an extension of your display, apps, audio, and media. The final section lists the destinations to which you can stream. This can include other Macs (if you use Squirrels’ other app Reflector), Apple TVs, Google Chromecasts, and AirPlay-compatible speakers. Just pick a source and a destination and you are ready to start streaming. 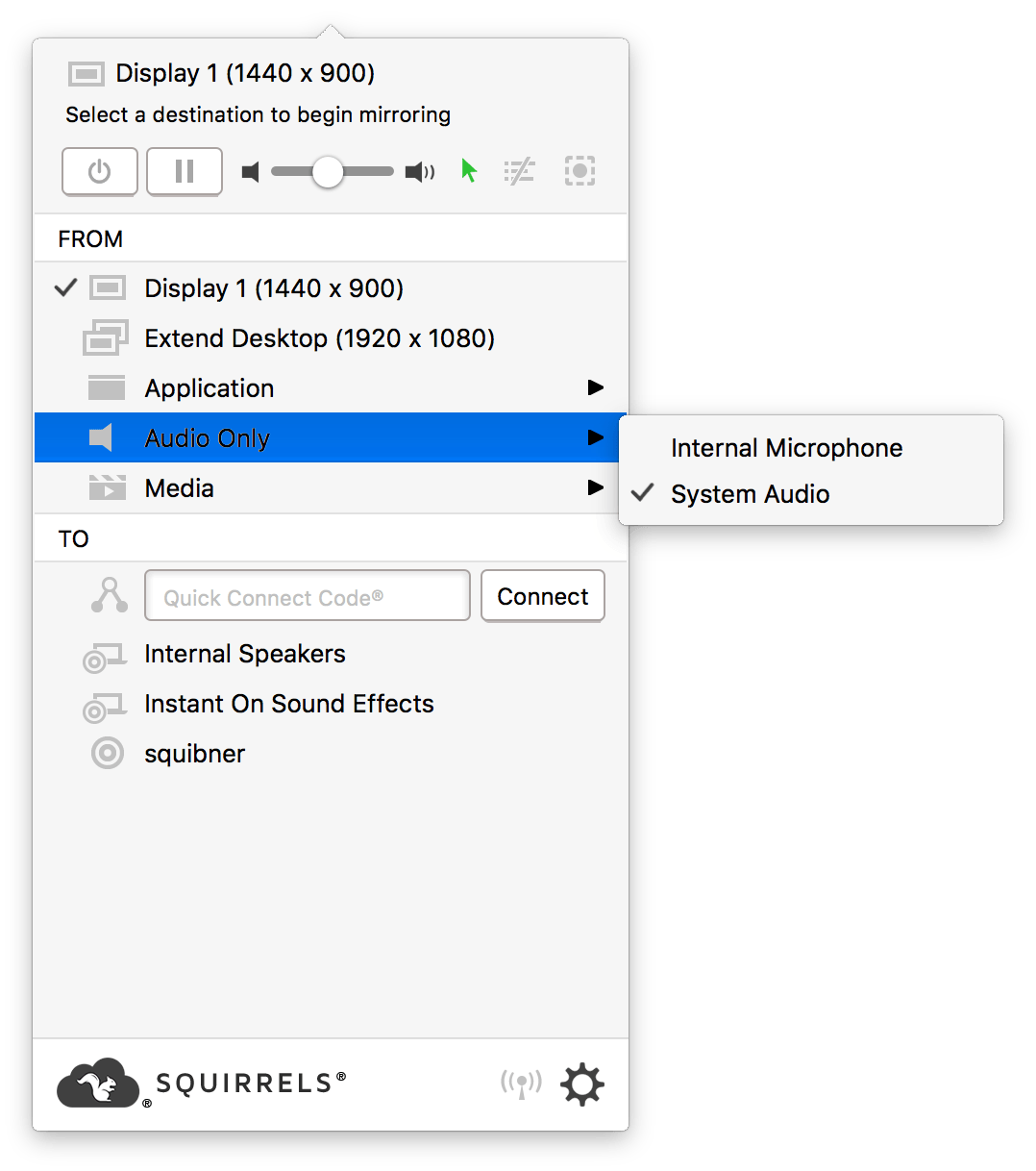 Some of what AirParrot does can be replicated by AirPlay, but AirParrot is much more versatile. With AirParrot you can stream a wide variety of media types, and to multiple devices simultaneously, some of which are not supported by AirPlay. Streaming specific apps without mirroring your Mac’s entire desktop, and the ability to control your Mac’s keyboard and mouse, are also clever features, especially for things like distraction-free software demos and presentations.

With AirParrot Remote, Squirrels has significantly improved the AirParrot experience for one if its primary use cases – media playback. As a menu bar Mac app, AirParrot 2 necessarily required you to have a Mac handy to stream your media to something like an Apple TV. If you ran AirParrot on a MacBook, that is okay, but not ideal when you want to lounge on the couch to watch a movie. But using AirParrot from a desktop Mac was far less convenient. Sure, you could use AirParrot with a screen sharing app like Screens, but that was not ideal.

AirParrot Remote, as its name suggests, is a remote for AirParrot 2. Squirrels wisely chose to replicate AirParrot 2’s dropdown menu in AirParrot Remote, so existing AirParrot customers will be right at home. The main difference from the menu bar app is the ability to switch sources if you have AirParrot running on multiple Macs. Once you select a source, you are presented with the same set of items to stream that you would see on your Mac. There isn’t much more to the app than that, which is by no means a criticism. In fact, that simplicity is AirParrot’s greatest strength. AirParrot has been transformed from a somewhat fiddly menu bar experience, to a simple remote control at home in your living room. 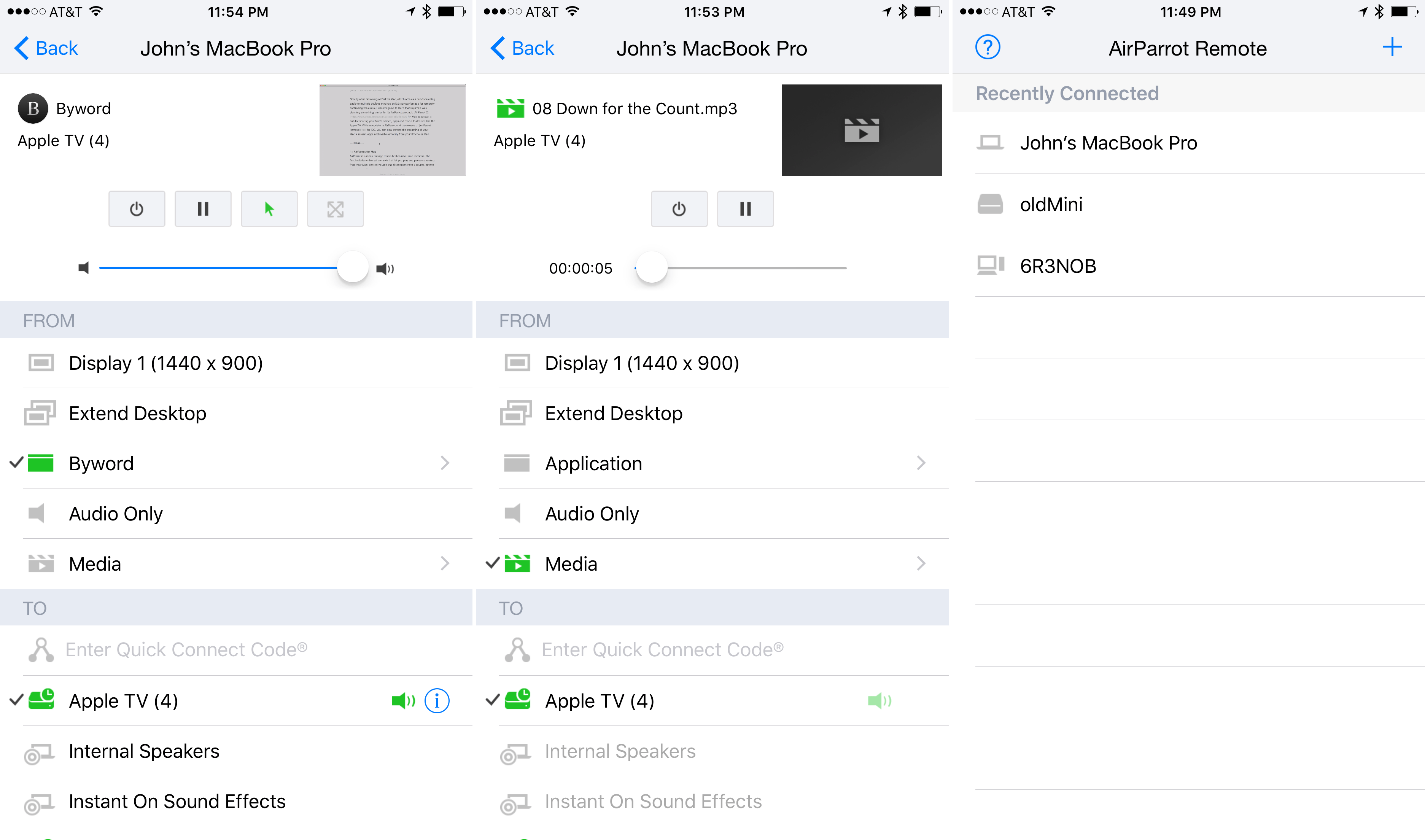 Stream your desktop, an app, or media.

In my tests, I had no trouble streaming media from a variety of Macs to my current generation Apple TV and even simultaneously to an older Apple TV, from a variety of Macs, including a 2009 Mac mini, a 2011 iMac, and my 2015 Retina MacBook Pro. Each worked equally well with AirParrot Remote. That said, I did run into a couple hiccups. Media playback was solid even when switching back and forth between sources, but desktop mirroring or extending sometimes failed after switching sources. Terminating the connection to the source Mac and reestablishing it fixed the problem each time it occurred. AirParrot Remote also crashed a couple of times while I was navigating remotely through my Mac’s file system to find media to play.

AirParrot is a nice way to build a media server system without buying additional hardware. By moving the app’s functionality onto iOS, Squirrels has made the app more approachable and, I expect, more appealing to a wider audience. The app does have a few bugs, but those are primarily limited to switching among Mac sources. If, like me, you are considering repurposing an old Mac as a media server, those issues are not necessarily deal breakers because I expect most people would only stream media from one Mac, and you cannot beat the price of AirParrot and AirParrot Remote compared to purchasing a dedicated hardware solution.

AirParrot for Mac is available directly from Squirrels for $12.99 and AirParrot Remote is $6.99 on the App Store.