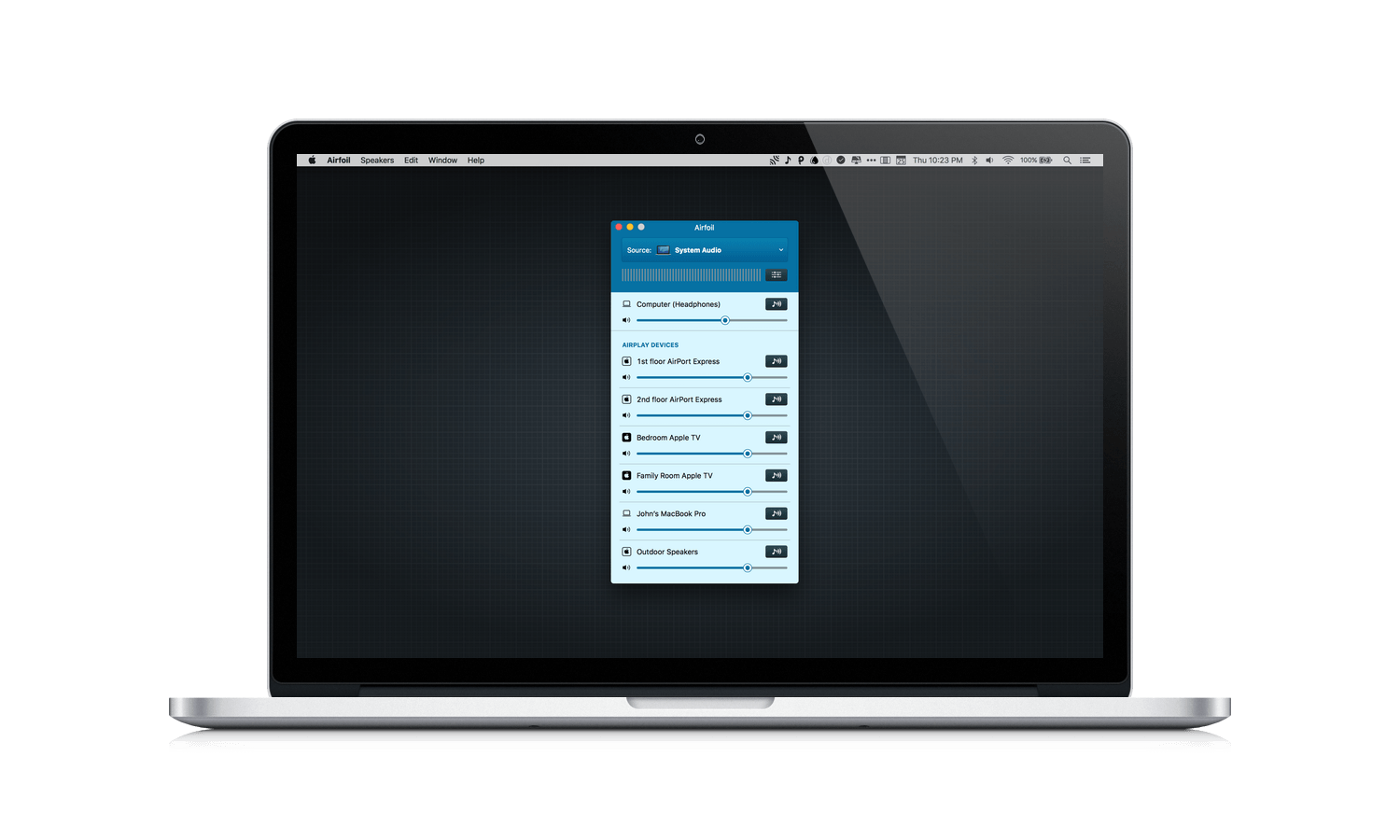 Sometimes apps are hard to ‘get’ because you don’t know you have the problem they intend solve until you try them. Airfoil by Rogue Amoeba was like that for me. Airfoil acts as a hub, routing audio from your Mac to anything connected to your local network. Between technologies like AirPlay and Bluetooth, I initially wondered what purpose Airfoil served. It wasn’t until I got eight devices streaming at once in perfect sync that I started to see some of the interesting possibilities.

Rogue Amoeba recently released version 5 of Airfoil, which includes a newly designed interface that fits in nicely with El Capitan, streaming to Bluetooth devices, and deep integration with Airfoil Satellite for iOS, Mac, and other platforms, which allows you to control Airfoil for Mac and audio playback, remotely. Airfoil also has twenty-one equalizer presets to help you dial in a particular sound for your music. For people with complex audio systems, Airfoil 5 also lets you create speaker groups, and will release its connection to an output device for others to use if the audio source has finished playing. 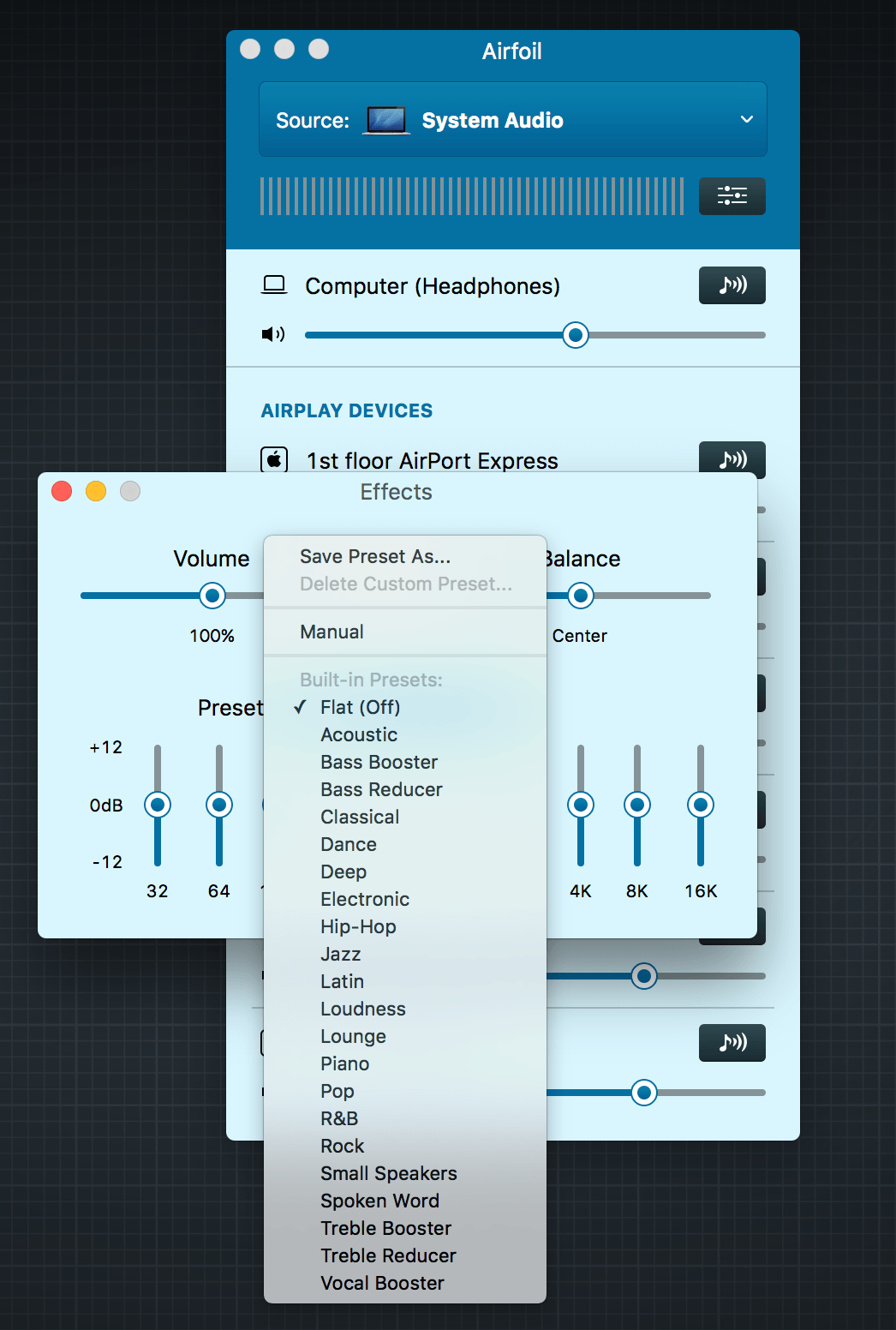 Airfoil for Mac accepts audio from any application on your Mac. Not only can you route audio from obvious sources like iTunes, but you can grab audio from browsers, VLC, QuickTime, Spotify, Hulu, or anything else that makes sound. All you need to do is choose the source app from the drop-down menu just below the title bar. 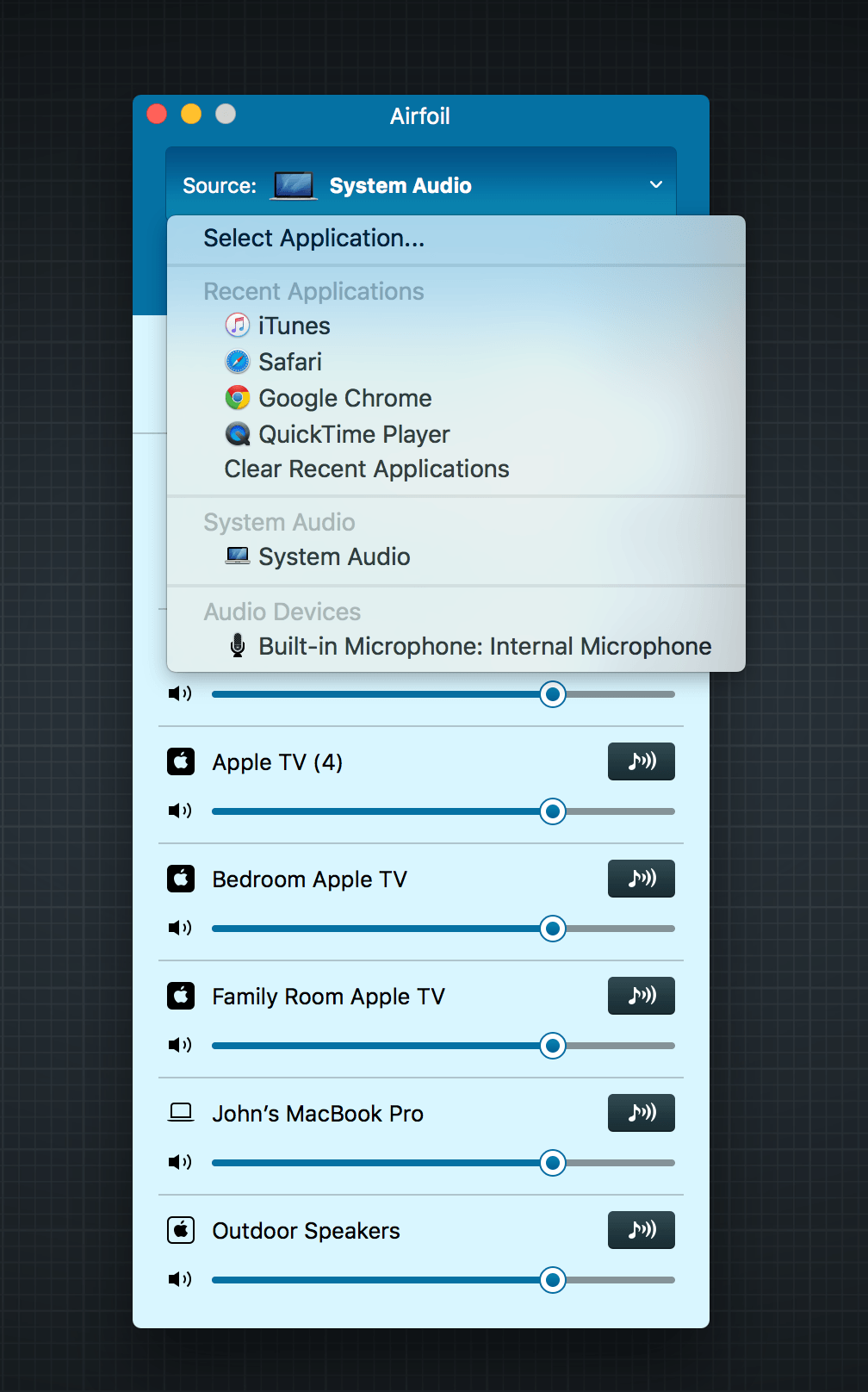 The next step is to pick where you want to send the audio. Airfoil works with speakers connected to an AirPort Express, Apple TVs, AirPlay devices from Apple and third parties, other Macs and iOS devices, with the help of the Airfoil Satellite app,1 and even Bluetooth devices like headphones. Picking devices to stream to is as simple as clicking on them in Airfoil, which allows you to stream to as many devices as you want in perfect sync with each other. 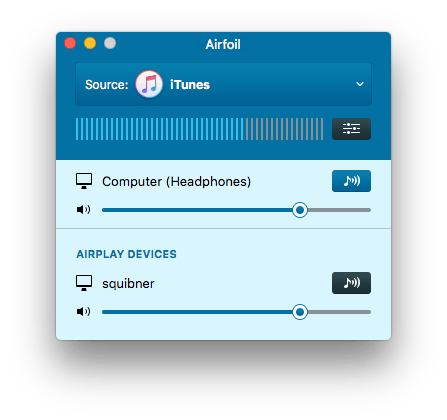 Choose a destination for your audio.

Airfoil Satellite for iOS deserves special mention because it serves two different and important roles. The first as a remote control for Airfoil, allowing you to turn audio destinations on and off and adjust their volume. The second role Airfoil Satellite serves is to control audio playback, allowing you to do things like play, pause, and skip tracks streaming from iTunes on your Mac. Toggling between the two modes of Airfoil Satellite is a simple matter of tapping the icon in the upper right hand corner of the app. 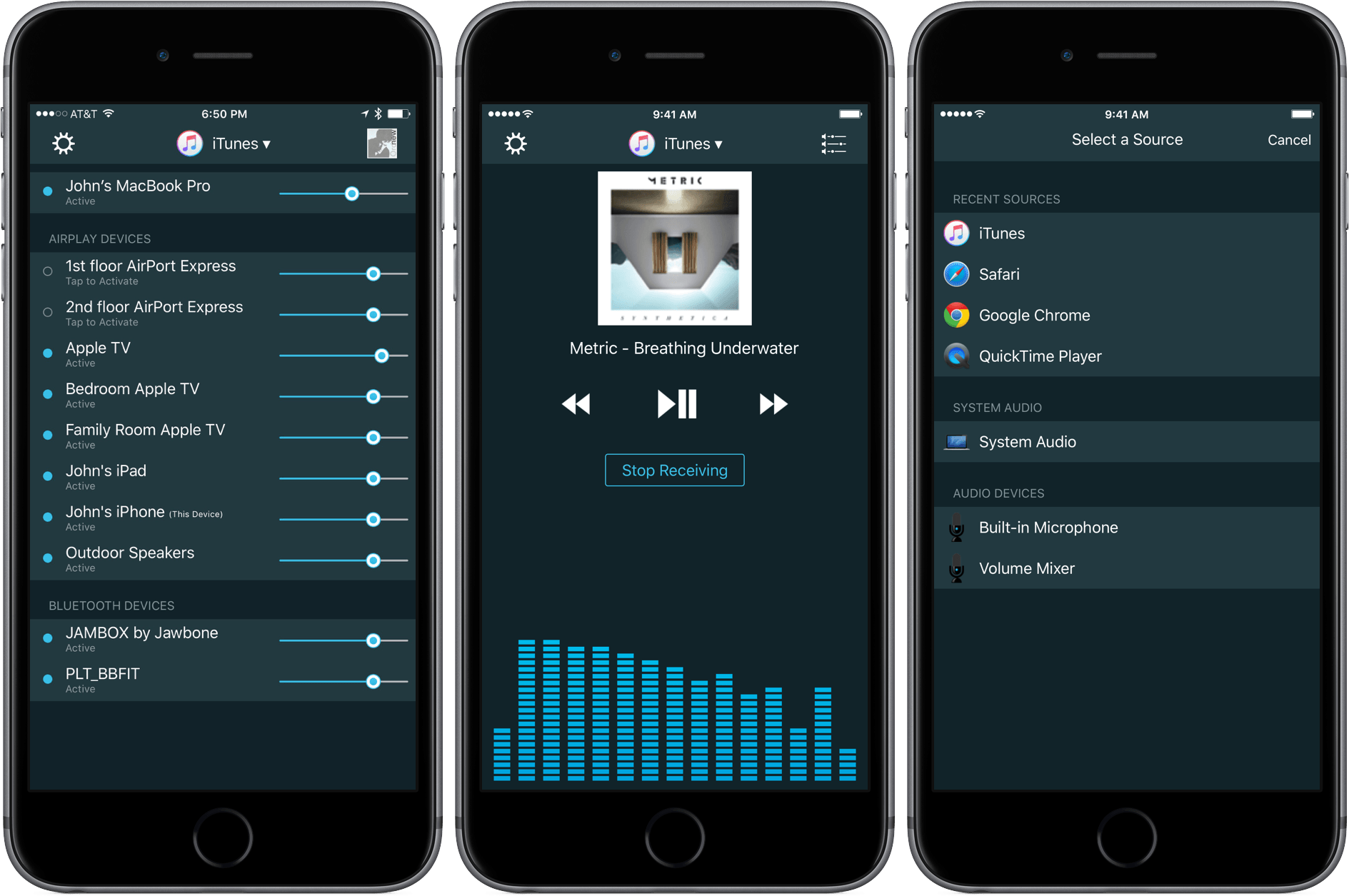 I’ll get to a few of the practical uses for Airfoil in a moment, but first, I couldn’t help but see how many devices I could stream to without breaking it. I quit at eight – three Apple TVs, a Bluetooth Jambox, Bluetooth headphones, my iPhone and iPad, and outdoor speakers connected to a first-gen AirPort Express. All eight played music from iTunes on my Mac perfectly in sync and without a hitch.

But the novelty of playing music over a bunch of devices wears off fast. The place where the rubber hits the road is with more practical applications. Like me, you probably don’t need to stream to eight devices at once. But here’s the thing – the rock solid code base that makes that kind of streaming possible is the foundation upon which you can build all manner of crazy audio setups to suit your individual needs. Here are a few that I tried.

Handoff is a cool technology. I love that I can pass Safari pages back and forth between my iPhone and Mac, but it’s impossible with Apple’s Music app, which is, frankly, baffling to me. Airfoil and Airfoil Satellite make this seamless. I usually listen to a podcast or music on the walk home from the train to my home each evening. As I arrive home, my iPhone connects to my WiFi network. If I need to check a few things on my Mac, which is running Airfoil Satellite, I can immediately stream the audio to my Mac while I work. Later when I’m finished using my Mac, I can just as easily reroute the audio to a Bluetooth speaker in my kitchen and an Apple TV in the living room, while I grab something to eat.

Airfoil’s ability to stream to multiple sources is its greatest strength. If we have friends over, I can AirPlay music to my Apple TV in my living room from my iPhone, but if some guests decide to sit outside on a nice day, that’s problematic because my outdoor speakers are connected to an AirPort Express and I can’t AirPlay from the iOS Music app to both at the same time. With Airfoil, this isn’t a problem. I have a couple options. I can stream music from iTunes to both sets of speakers simultaneously and in sync using a Mac, but I prefer to AirPlay from my iPhone to a Mac using Airfoil Satellite and then out to the destinations so I can control the music with my iPhone.

You can’t AirPlay Apple’s Beats 1 radio station or audio from concert videos like Taylor Swift’s 1989 World Tour, but because Airfoil is grabbing audio at the system level, it can. This is particularly useful if you want to stream Beats 1 or concert audio to AirPort-connected speakers or other devices that don’t support AirPlay, like an Amazon Echo or Sonos player.

I went into testing Airfoil skeptical about what it added to AirPlay and Bluetooth streaming, and came out convinced of its utility. On iOS, AirPlay can only establish a one-to-one audio connection and has the reputation of being a little flakey sometimes, as is Bluetooth. Airfoil was rock-solid every time I used it to stream audio, even when I connected eight devices. That’s not something I expect to do often, but it does highlight the stability and flexibility that Airfoil offers over AirPlay and Bluetooth. By coordinating playback via devices you may already have around your home, Airfoil is also a great way to create an ad hoc whole-home audio system similar to expensive and proprietary alternatives like Sonos.

If you bought Airfoil after November 1, 2015, Airfoil 5 is free. Other existing customers can upgrade for $15. If you are new to Airfoil, it is available for $29 from Rogue Amoeba. A free trial is also offered.