Unit converters are perfect as iOS apps: their feature set is limited, they can work with and without an Internet connection, and, because of their constraints and purpose-oriented nature, they allow developers to experiment with touch and UI interactions. They’re less celebrated than Twitter clients and weather apps, but they’re UI playgrounds too.

As such, I’m having a hard time settling with a specific unit converter because every week new interesting ones come out and I’m lucky enough to get to try them because trying apps is part of my job. I suppose that if converting units was a recurring task of my daily life I would be forced to pick one and stick with it, but, instead, I’m free to experiment and let my readers judge.

In the past year, I’ve taken a look at various unit and currency converters like Denominations, Convertible, Measures, and, recently, Amount. Each one of them solves a problem in a different way, either with a particular interface design or through advanced features. The Converted, developed by Ideon, is a $2.99 app that eschews manual input through a keypad to show you the relation betwen units in a unique presentation that I haven’t found in other iOS apps.

The Converted shows two units on the opposite sides of a vertical screen, with a “ruler” in the middle where the actual conversion takes place. Rather than asking you to enter a value to convert, The Converted shows how much a predefined value corresponds to in the other unit; as you scroll vertically, the relation between units follows your finger, so you’ll see that, as of October 2nd 2013, 70 Euros correspond to around 95 US Dollars and that 400 USD are roughly 300 Euros. It’s a very “visual” way of converting units that is focused on quickly showing relation between reference points.

The Converted has some options to tweak the values shown on screen, though. If you double tap, you can “zoom into” a unit to show more precise amounts, and you can pinch close to zoom out and get the bigger picture again. Alternatively, you can tap & hold to show a popup bar to fine-tune your conversion, but that won’t let you scroll off the edges of the currently selected area. This feature is also available by tapping the button in the middle of the tab bar; the one next to it, shaped like a Mesoamerican pyramid, lets you bring up a list of 5 built-in reference values. 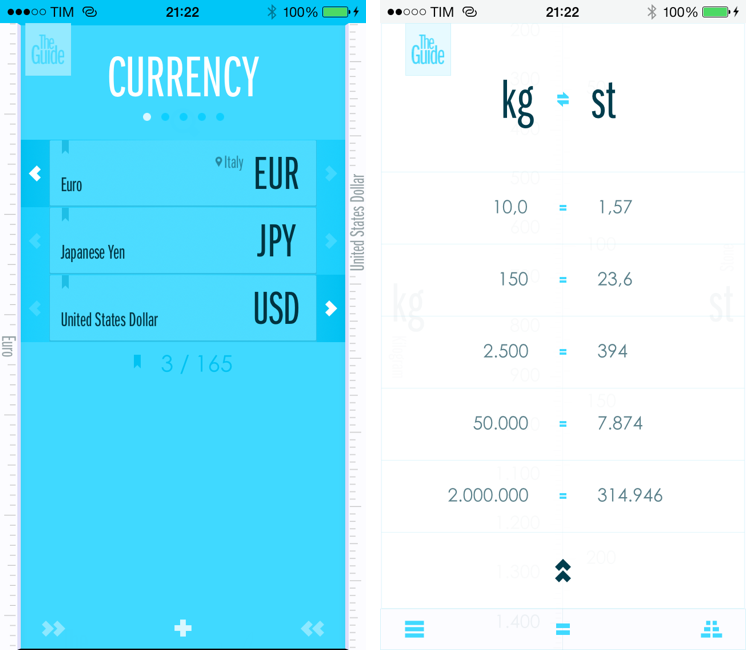 The app supports currency, length, weight, volume, and temperature units. To access the unit selection screen, you can swipe sideways from the center of the screen, and again swipe through a menu revealed behind the conversion UI. Units can be bookmarked to have quick access to them in the list, and you can swipe them into the ruler to start a new conversion process.

The Converted is delightfully physical in how it layers pieces of its interface and allows users to interact solely with gestures. The app’s design is simple and minimal, perfect for iOS 7, but not anonymous. The way the app shows an immediate relation between units is unique and useful if you just want to get a quick overview of what a conversion looks like. My issue with The Converted is that I occasionally need to do precise conversions for my job, and the app’s “precision mode” is inferior to regular manual input, feeling like an afterthought and a forced addition to the main interface. If you need to enter precise input for unit conversion, I can’t recommend The Converted because it’s not what the app is meant to be.

If you, however, like the idea of a unique approach to quick unit conversion overviews, The Converted is a fun, fresh take. It’s $2.99 on the App Store, and Universal.