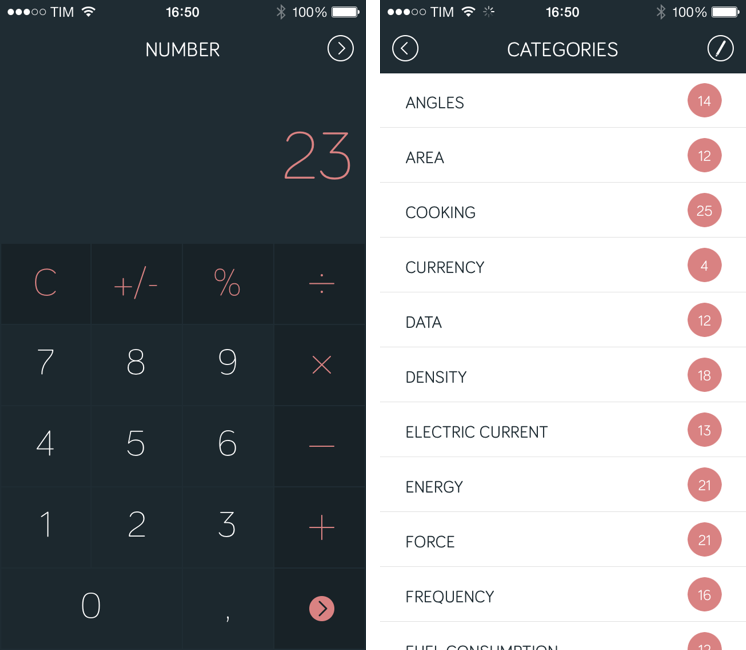 Amount (developed by Marco Torretta) is a unit converter app for iPhone that takes a unique approach in how it lets you enter numbers and pick a unit to convert. The app was updated yesterday to offer a new layout, and it’s ready for iOS 7 with a status bar that blends with the calculator’s dark display (it’s also still compatible with iOS 6 devices, but without the new status bar design).

The main screen of the app is called Number and it’s a standard calculator that lets you enter an amount to convert. Because it’s a calculator, you can use it to do simple operations, and I like how numbers and clearly separated from other keys through color. My only complaint is that there are no sound effects when pressing keys, which can be confusing if you’re not looking directly at the display but still would like to hear feedback from the app.

When you’re done entering a number, Amount doesn’t bring up a menu to let you scroll to select a unit; instead, the app lets you swipe horizontally to go from the calculator to a Categories view where you can choose 25 conversion types that include the obvious Currency and Length, but also things like Network Speed and Fuel Consumption. Categories you don’t need can be hidden from this view by tapping on the icon in the upper right corner of the title bar, which will show a neat animation for switching between normal and edit mode (the animation is more fluid on my iPhone 5 with iOS 7 than my iPod touch 5th gen running iOS 6). 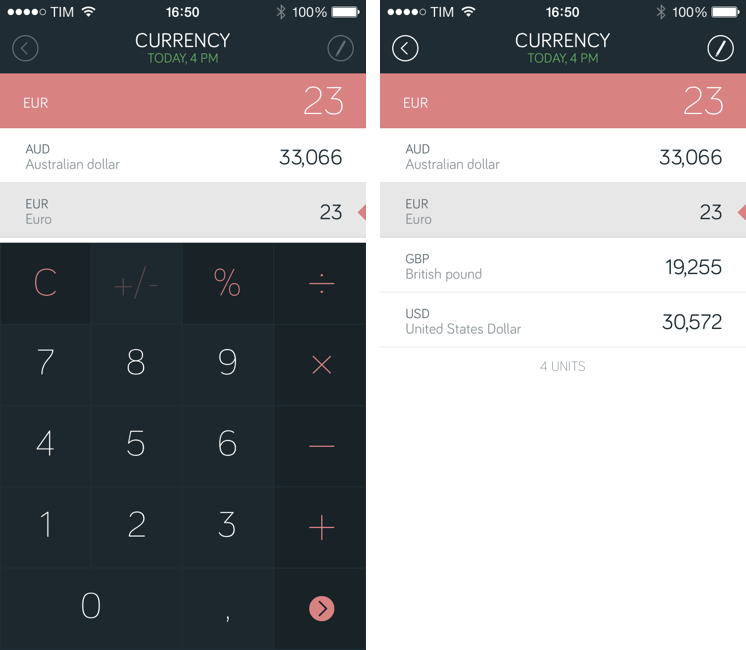 My favorite feature of Amount is that it shows a conversion across multiple units at once. When you choose a category, the amount you entered is displayed in a pink bar at the top (and you can tap that bar to bring up the calculator again) and multiple units are shown below, each displaying its converted amount. This is especially useful for me as, when I’m converting units like Euros or meters, I can see multiple results at once so I can choose another unit quickly and with more context. And because Amount’s edit mode is also available in the single unit view, I have set up a screen that lets me see just AUD, EUR, GBP, and USD simultaneously, so I don’t have to worry about opening the unit selection menu again and choosing another unit.

If I had to bring up another minor complaint besides lack of sound effects, I would say that there’s no way to quickly open a favorite unit among many. Ideally, it’d be nice to tap & hold to right arrow button in the calculator (the one you can use to open the Categories screen if you don’t want to swipe) to launch a pre-defined conversion – such as Currency in my case. Amount doesn’t have an iPad version, but it looks like that’s coming soon.

Amount is easy to use and ready for iOS 7 with a full-screen design and neat animations. It isn’t packed with advanced functionalities, but I’d definitely recommend it as a unit converter app for everyone. It’s only $0.99 on the App Store.