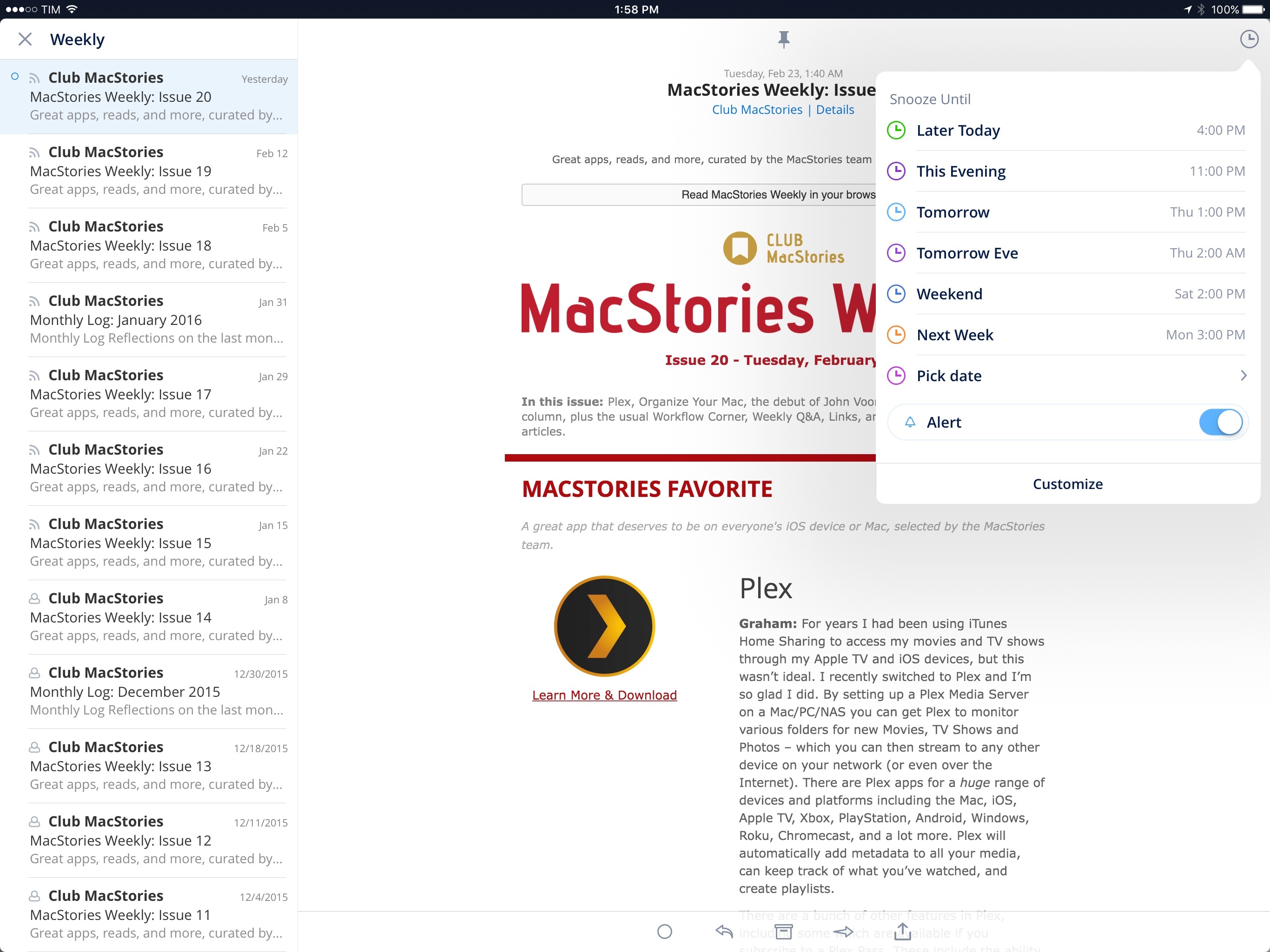 Since my original review in May 2015, Readdle has been steadily improving their email client for iPhone, Spark, with changes that addressed many of my initial complaints. Over the past 10 months, Spark has received support for HTML signatures, the ability to select multiple messages and send multiple attachments; it’s even been updated with customizable swipe gestures and better handling of attachments from cloud services. And in the aftermath of Mailbox’s demise, Readdle (cleverly) rushed to update Spark with full-featured snooze options reminiscent of Dropbox’s email client.

What Spark hasn’t gained over the past year is a clear business model and an iPad version. The good news is that at least one of these omissions is being rectified today with the launch of Spark for iPad, an expansion to the bigger screen that I’ve been testing on my iPad for the past month.

In its transition to the iPad, the core functionality of Spark hasn’t changed considerably. You can still refer to my review of version 1.0 for the basic idea behind email management in Spark (a mix of smart email organization and UI personalization) and consider the aforementioned improvements – some of them available in other email apps as well – to see where Spark has gotten so far.

On the iPad, Spark shows a classic list of messages on the left side of the screen, with a nested menu to open a sidebar with navigation options for the unified inbox, archived and pinned messages, and a list of all your configured email accounts. When the account/mailbox sidebar is visible, you won’t be able to interact with the message list: the sidebar is modal, and it’ll make messages non-tappable. While I understand the decision, having modal sidebars on the iPad Pro’s large display makes the experience feel like a glorified iPhone app, with views that can’t coexist alongside other lists. It would have been nice to, say, scroll messages and expand folders at the same time, or drag and drop messages between mailboxes, but it isn’t possible in Spark today.

Spark for iPad, though, is fast, more polished than Airmail, and it makes an intelligent use of popovers for extra information such as sender details and snoozes. A nice touch of the iPad version is the second sidebar on the left side of the screen: widgets (your calendar, recently seen messages, folders and smart folders) will be available as one-tap shortcuts in this sidebar, and they’re quite useful to speed up navigation to often-used folders or searches. 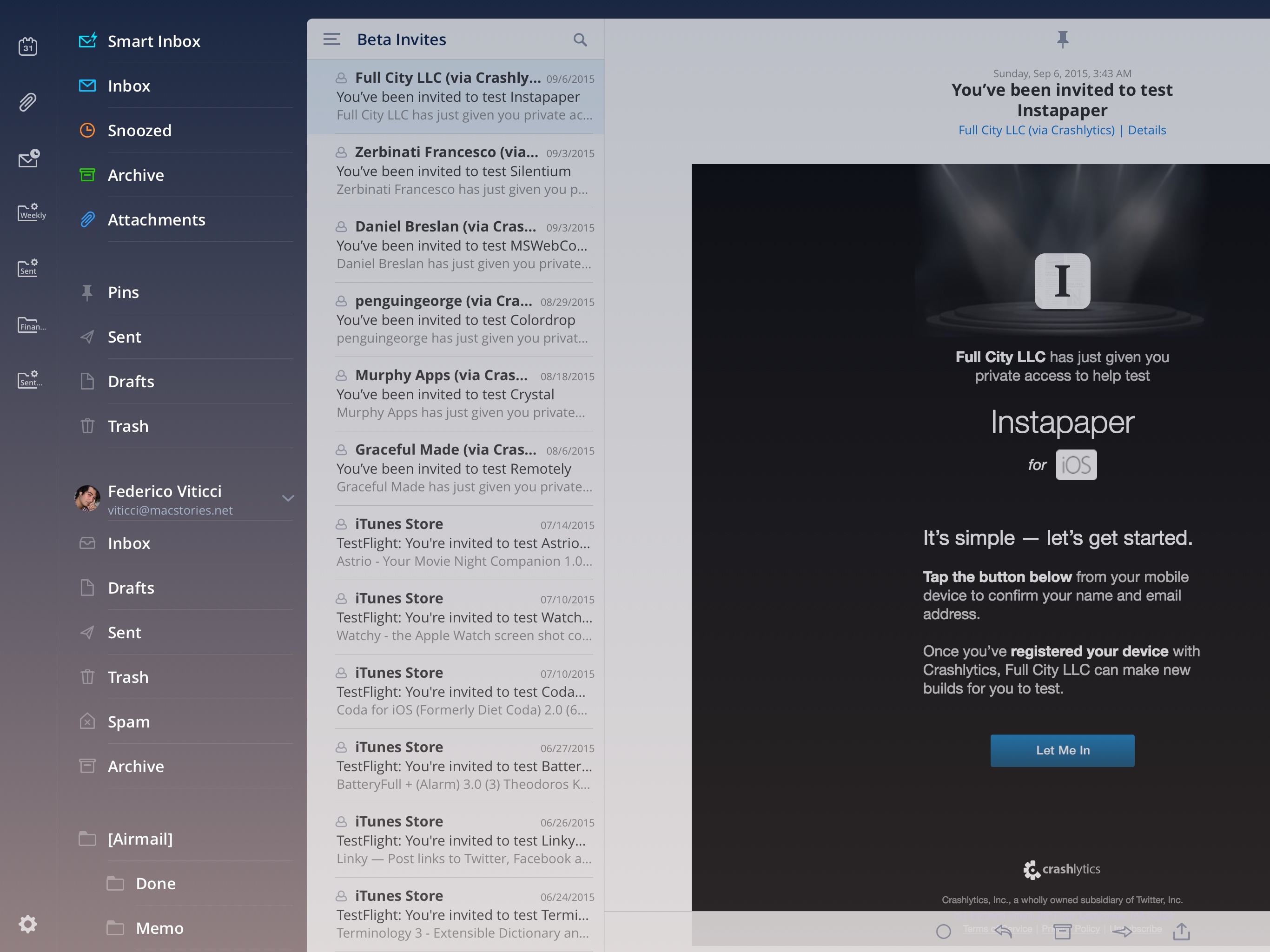 I’ve been enjoying the widget placement on the side of the inbox: I’ve created widgets for messages sent from a specific account, one to view all issues of MacStories Weekly, and another to view messages I file in my ‘Finance’ folder. Spark’s natural language search for messages comes in handy to create complex searches, which are still not possible with most email clients for iOS.

I have two gripes with Spark’s widget sidebar. Like the account sidebar, it opens a list of messages next to your main view – which is a great use of the iPad’s canvas – but the list takes over everything else. You can’t, for instance, browse a list of messages from a smart folder while simultaneously scrolling messages in your inbox. It almost feels like Readdle wanted to build in-app split screen message management, but only got halfway there. 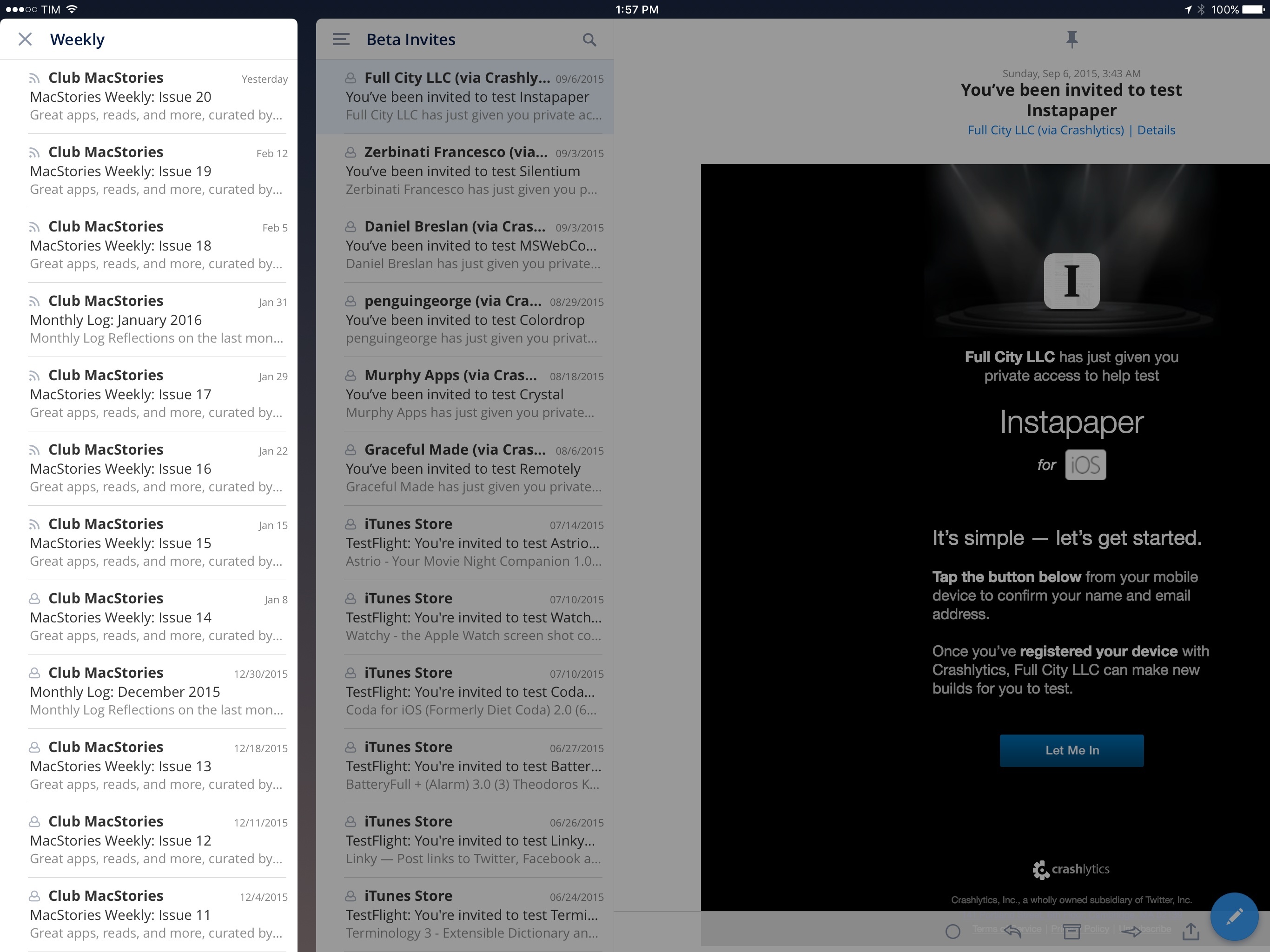 A smart search opened from a widget in the sidebar.

Second, the widget sidebar is too thin to fit the labels of folders and smart folders. Spark doesn’t let you assign custom icons to folders – which would remedy the issue – and anything longer than 5 characters will get truncated, which doesn’t look nice.

I’m a fan of widgets on the iPad and how Readdle envisioned multiple lists of messages at once, but I would like to see better interaction between multiple views, and a slightly wider sidebar to better accommodate text labels.

With Spark now on multiple devices, Readdle has added an option to keep accounts and settings in sync between platforms. 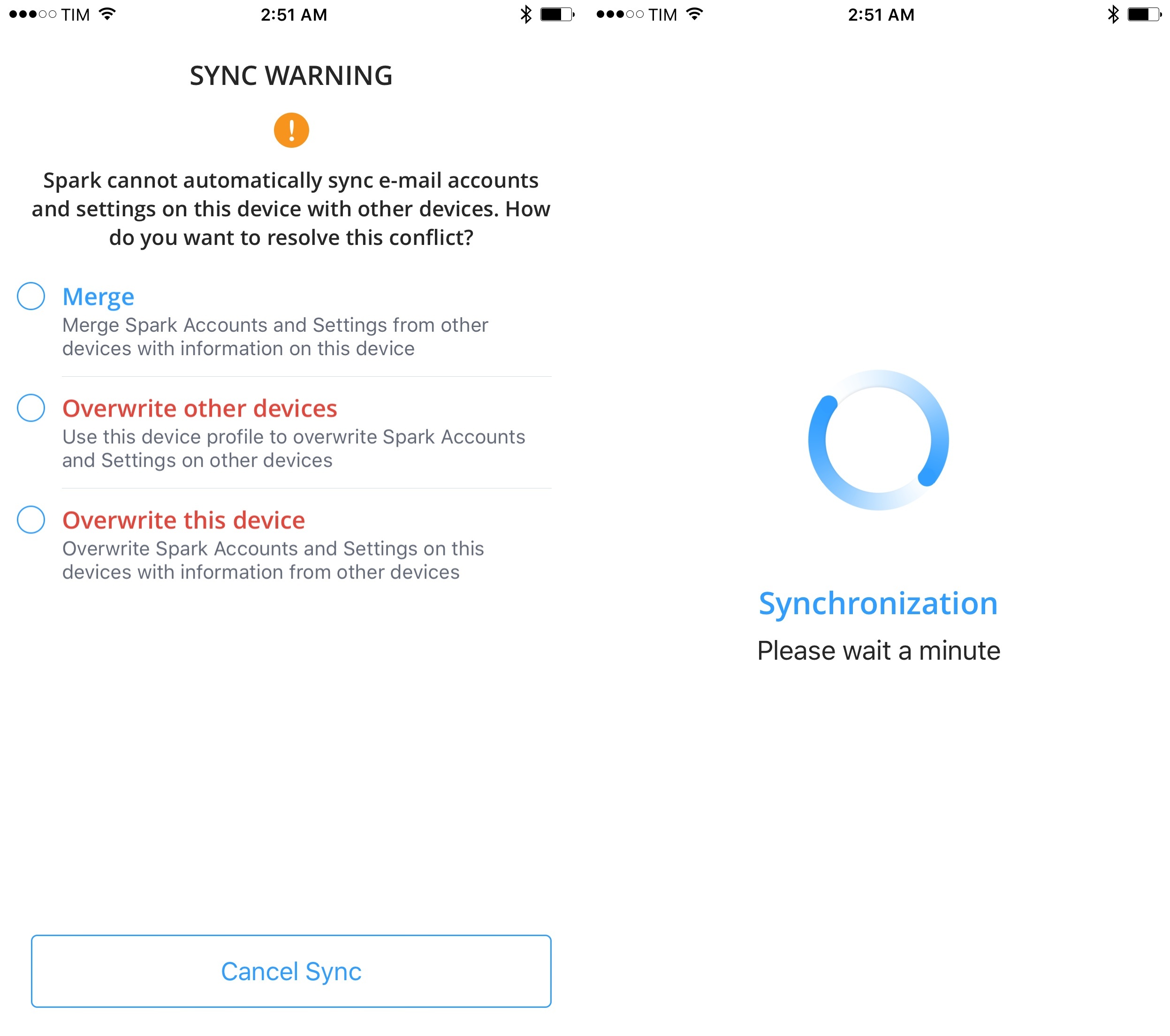 Spark’s sync is based on iCloud and it can be enabled in the Settings. Once activated, you’ll likely be presented with a conflict resolution screen where you can decide to merge settings, overwrite other devices, or replace settings on the current device. The process works: after enabling sync on my iPad and waiting a few seconds, I toggled sync on my iPhone, chose to overwrite local settings, and I ended up with the settings and accounts I first added on the iPad.

I have to point out, however, that Spark doesn’t offer the same kind of control that Airmail gives you over what gets synced. In Airmail, you have dozens of options to choose whether you want to sync specific preferences; in Spark, a generic “accounts and settings” is all you get, without a way to only keep some settings synced between multiple devices. There are pros and cons to this approach – there’s nothing to configure in Spark – but I miss the deeper controls of Airmail.

Where Spark Is Going

Spark is a polished email client with features we’ve come to expect from modern apps such as Outlook and Google Inbox. On top of those functionalities and design resemblances, Readdle has built a client that runs on the iPhone and iPad, with support for iOS 9 and Split View, Safari View Controller integration in the email viewer, and even a watchOS 2 app. Spark continues to strike a good balance between the deep customization of Airmail and the limited versatility of Apple’s Mail app, appealing to iOS users who want a powerful email client without too much fiddling.

Several months after its debut on iOS, it’s still not clear what Readdle’s long-term plan for Spark is. Advanced functionalities in the form of special email cards – listed as “coming soon” in the original iPhone app – haven’t been released as paid additions, and Readdle hasn’t brought any freemium component to Spark to entice heavy users to pay. With all the email clients we’ve seen launch to great promise and eventually be abandoned for something else, it’s difficult to make the case that Spark will be around for years to come when the business aspect is still up in the air. While companies like Microsoft and Google release their email client for free to get users into their ecosystems, Readdle doesn’t have an ecosystem of web services to lock users into, and yet everything is still available for free, for everyone. Readdle does have a collection of free and paid apps for iOS, but none of them offer a well-defined integration with Spark.

With the iOS email client market heating up in the past year – Outlook and Airmail being two notable examples – it’ll be interesting to see how Readdle will approach Spark going forward.

For now, Spark continues to be one of the top email apps on iOS, with dozens of smart features and nice touches. Despite some problems, the iPad app is powerful and versatile, and it’s available from the App Store today.