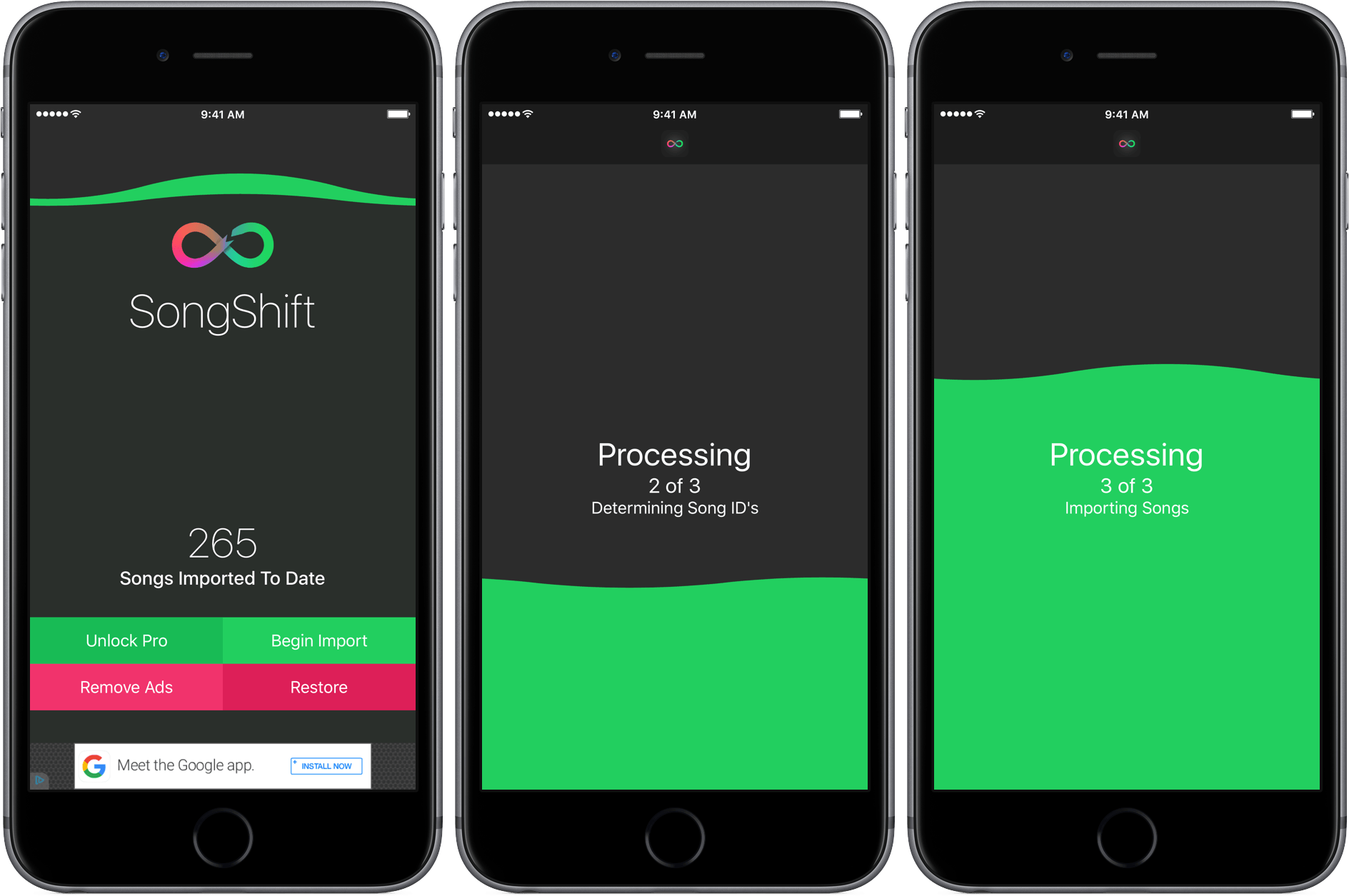 When Apple Music debuted last summer I switched to it from Spotify. I wasn’t on Spotify all that long, but I did have a few playlists I wanted to take with me, including a big one with all the songs I had favorited. At the time, I found a script that logged into both services, tried to match the songs, and replicate the playlists on Apple Music. It worked reasonably well, but not great. SongShift automates that process. In my tests, SongShift did a solid job matching songs between Spotify and Apple Music, but because it is an import utility and not a sync service, it is a little cumbersome to use as a way to keep up with playlists you follow on Spotify that are frequently updated.

SongShift’s power lies in its simplicity. When you open the app, you are prompted to log into your Spotify account. You pick a playlist to import, choose to import the songs into your Apple Music library or a playlist, and that’s it.

With an update released late yesterday, SongShift gives you the ability to create a new playlist from within SongShift when importing into a playlist. The new Apple Music playlist will have the name used in Spotify. Previously, if you didn’t already have a playlist set up to receive the songs imported from Spotify, you had to go to Apple’s Music app, create an empty playlist, and then import using SongShift. It’s a small change, but it removed one of the biggest friction points in SongShift. 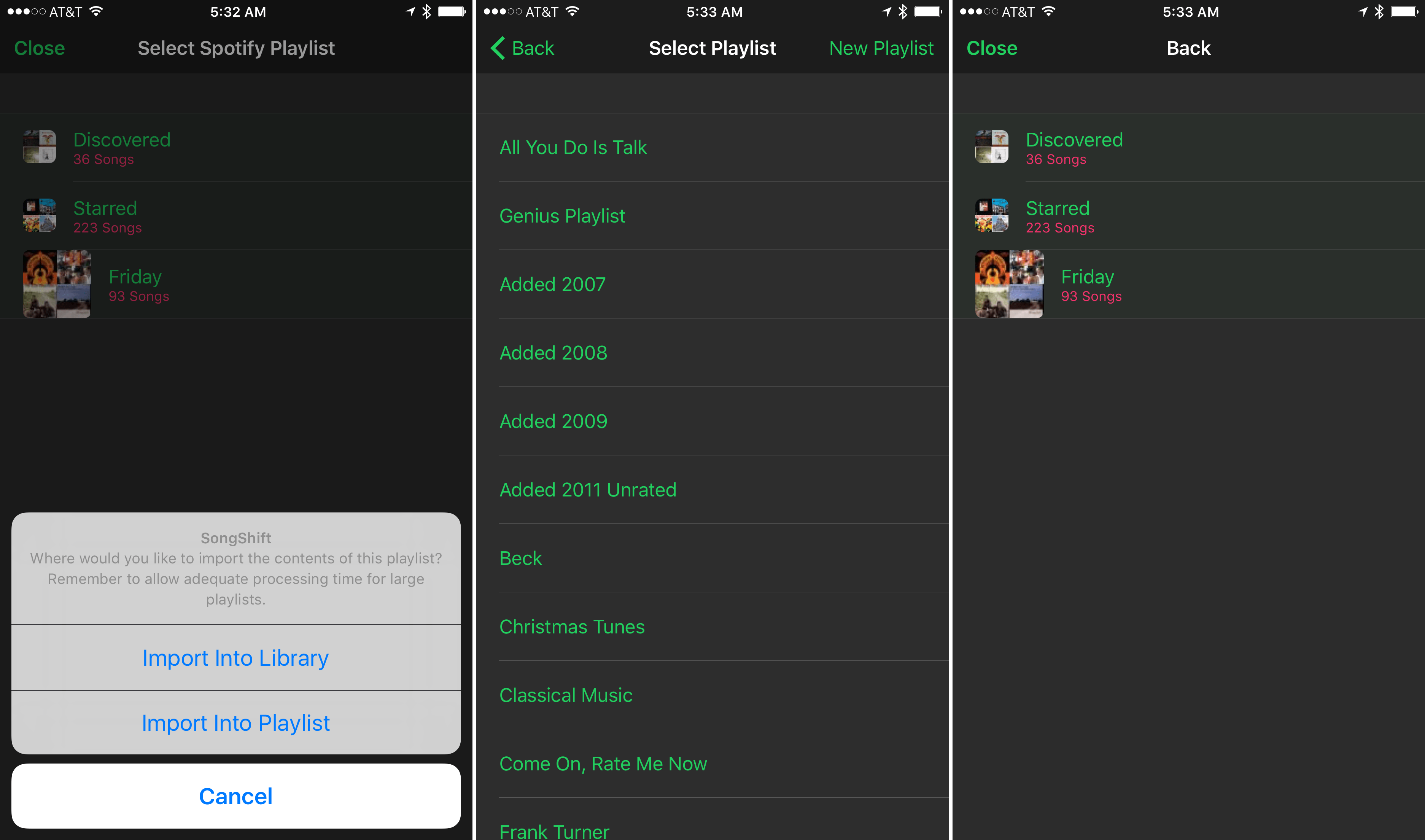 After you choose where to put your imported songs, SongShift gets to work. In my tests the matching and importing process was fast. Even with a playlist of over 200 songs, the process took less than a minute. I tested three playlists of varying lengths and the match rate was over 90% in each case. A handful of the 300+ songs I added to Apple Music were not the same version as I had in Spotify, but these instances were few and far between.

The first playlist I imported is my playlist of 223 favorited Spotify songs. SongShift matched 214, an impressive 95% success rate. The second playlist is a handpicked list of 93 songs of various vintages. SongShift matched 85, which is around 91%. The third playlist I tried is a playlist of 36 of Federico’s favorite songs from Spotify’s Discover Weekly feature. SongShift matched every song. I suspect the difference between Federico’s playlist and mine is that his is comprised of very recently released music only, whereas mine include songs that were harder to match because they exist on multiple albums, including the original source, ‘best of’ albums, and compilations. Overall, given the notorious difficulty matching song signatures and metadata, I was impressed with SongShift’s performance.

There are, however, a few rough edges and use cases I would like to see addressed in future versions. SongShift is free, but has two in-app purchases. The first removes ads. The second allows importing playlists with over 100 songs. I purchased both, but on the iPad, ads partially appeared on the bottom edge of the view almost every time I restarted SongShift. It’s not clear whether SongShift is losing track of my in-app purchase or whether it’s a layout problem, but in either event it should be fixed. In the meantime, tapping the ‘Restore’ button shifts the ad offscreen.

Ads sometimes still show at the bottom of the view on iPad.

One feature I would like to see added is deduping. One thing I have missed since I left Spotify is that I still have friends and other people I follow on the service and I would like to follow the music they share. I imported Federico’s Discover Weekly playlist, which is great, but when he adds new songs to it, there’s is no way for me to import just the new ones. If I run SongShift on his playlist again it imports everything, so instead of 36 songs, I end up with 72. It would be great if SongShift compared the songs it matches between Spotify and Apple Music to the destination playlist and only imported ones not already there. To work around this, you can simply delete the playlist in Apple Music and reimport the whole playlist from Spotify, but that’s not a great workaround.

Some of my favorite utility apps are ones that take a complicated process and make it so simple it seems like magic. SongShift does just that - there is undoubtedly a lot going on under the hood to make SongShift work, but you don’t see it, and don’t have to care about it. For Apple Music customers, SongShift is a great little app to tuck away on your iPhone or iPad for those times you discover a cool Spotify playlist.