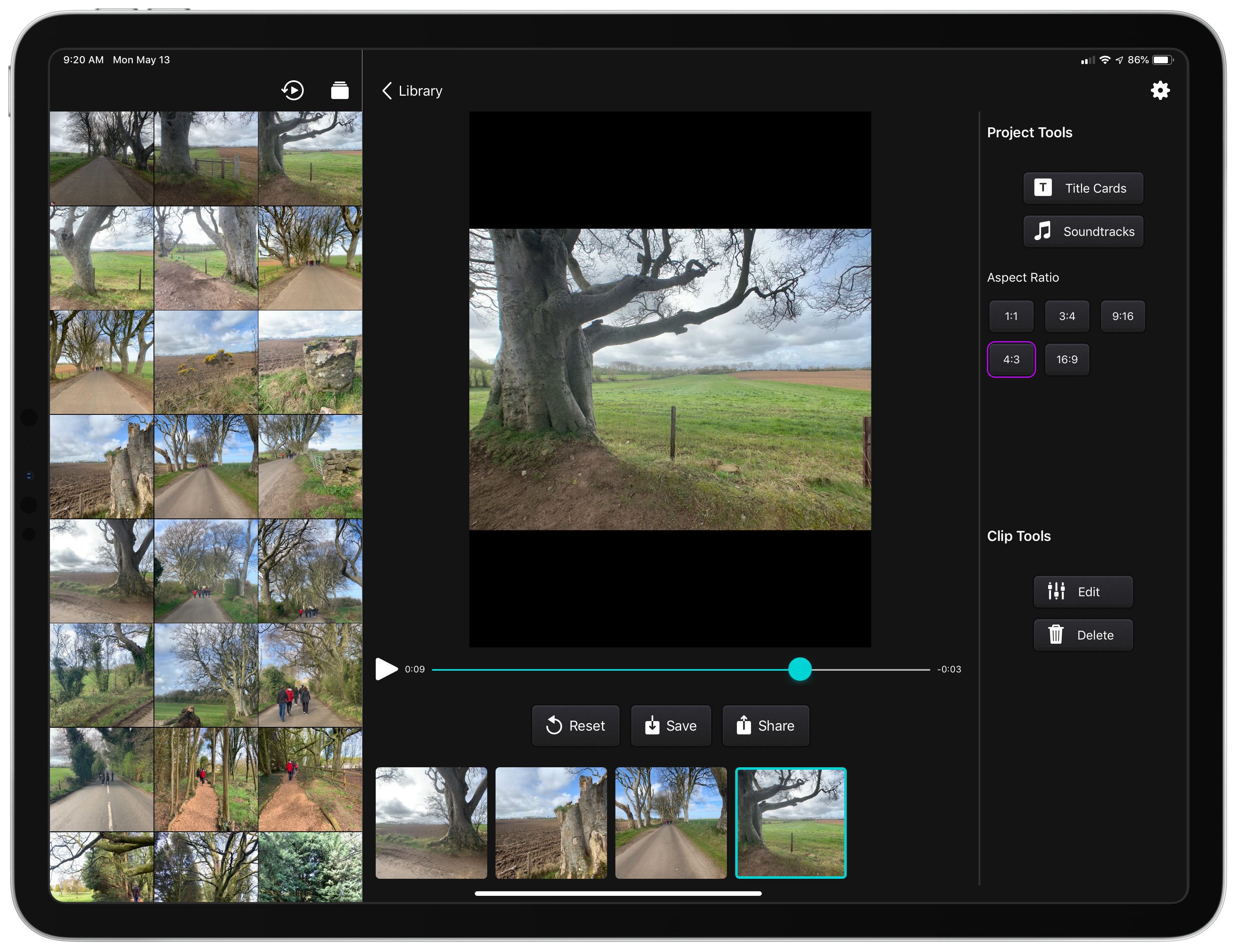 When I first covered Snapthread early last year, you could tell where it was headed. The app was conceived initially by developer Becky Hansmeyer as a way to combine Snapchat videos. By last January though, the app had evolved into a general-purpose solution for quickly and easily stitching together Live Photos, still photos, and short videos that could be shared on any social network or directly with friends and family. With version 2.0, which is out today, Hansmeyer has refined the existing user experience, added useful new functionality without complicating the app, and leveraged the iPad to create a more versatile video creation tool that works equally well for quickly sharing your creations on social networks as it does with small groups of friends and family.

The core functionality of Snapthread hasn’t changed, so if you’d like to learn more about how to combine Live Photos, still images, and videos using the app, check out my 2018 review. For this review, I’m going to focus on the UI changes and new features introduced with version 2.0 of the app instead. 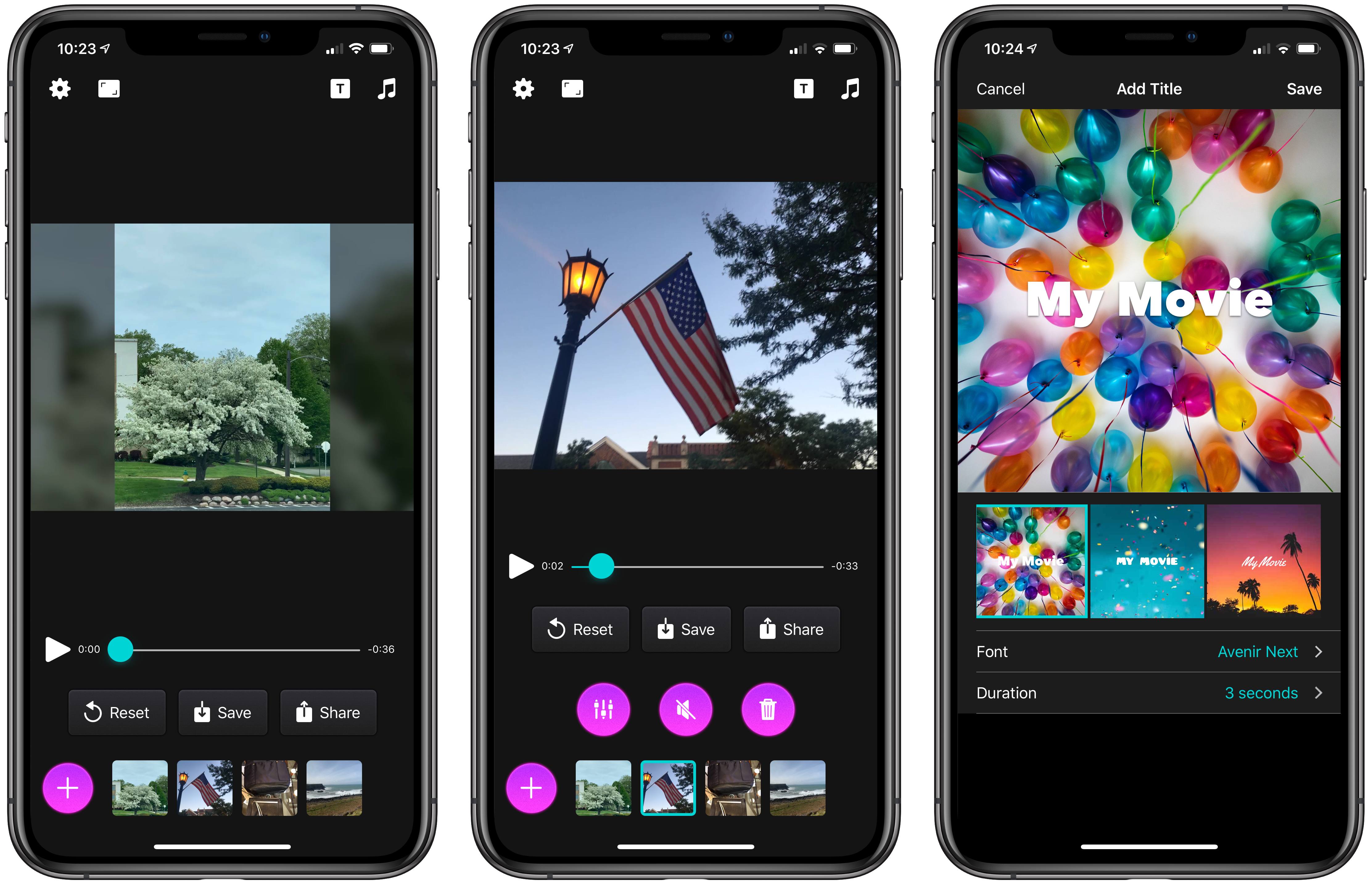 Changes to Snapthread’s UI give it a more expansive feel and places users’ focus on their video project.

The first thing I noticed when I opened version 2.0 of Snapthread on my iPhone was that it felt more expansive. That’s in large part because the blue toolbar at the top of the app is gone, replaced by a black background that blends with the black of the main UI and makes the app feel more spacious.

The top toolbar on the iPhone version is less crowded too. Buttons to reset a video project and share it have been moved near the bottom of the screen where you’ll also find buttons to save a project, access editing tools, mute the audio of individual clips, and delete clips. These are some of the most frequently-tapped buttons in Snapthread’s UI, so the new placement works exceptionally well for one-handed iPhone use. Buttons for settings, modifying the aspect ratio of a project, and adding a title card and music are still part of the top toolbar, but with fewer, visually-balanced icons the arrangement does a better job than in the past of putting the user’s focus on the project area.

The iPad version of Snapthread has gotten a substantial update too. With more space to work with in landscape orientation, the iPad interface is divided into three parts. Along the left side is your photo library, from which you can drag in video clips and photos. When not in use, the library panel can be hidden. The center portion of the screen is dominated by the project area for editing your clips. Tools for adding title cards, music, changing the aspect ratio of your project, and clip tools have been moved to the right side of the screen making use of the iPad’s expansive screen. 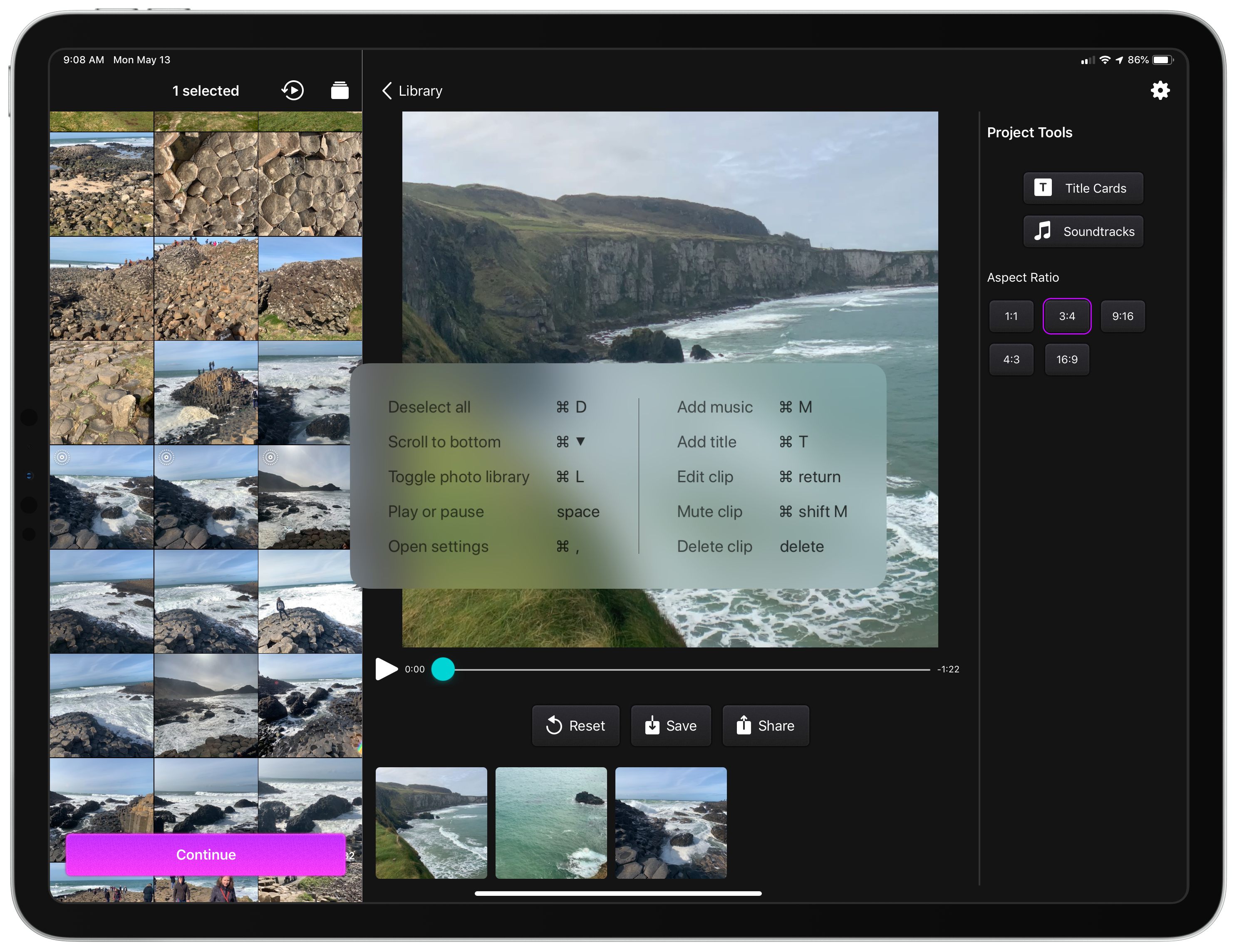 Snapthread includes a large set of keyboard shortcuts on the iPad.

The other significant addition to the iPad is a thoughtful collection of keyboard shortcuts. Most of Snapthread’s tools are available via shortcuts. I particularly like the ability to open and close my library, deselect all items in the library, and toggle editing mode for clips from the keyboard. Once in editing mode, keyboard shortcuts are my preferred way to move between Snapthread’s tools too. You still need to tap the screen to select items to add to a project, move between clips in a project, and to access things like saving and sharing, but with most of the app’s modes and views navigable by shortcuts, the amount of tapping on the screen is substantially reduced.

Snapthread’s toolset has been improved with version 2.0 too. Trimming video, picking a duration to display still photos, cropping, and rotating were all available in earlier versions of the app, but have been joined by filters and onscreen text. Eleven filters can be applied to video and photos as well as five typefaces for overlaying text in ten colors. Video clips under five seconds in length can also be extended by looping them up to four times, and a bounce effect can be added.

There are new project-level tools too. In addition to adding music to a project from your music library if it’s stored locally on your device and stock music included with the app, you can now import music stored in iCloud Drive or another cloud service using the iOS document browser. There are also thirteen new title cards to choose from, and the ability to pick backgrounds from your photo library.

I ran into a couple of bugs in my testing of Snapthread. After applying a filter to video in the editor, the video was no longer viewable in that view, but the filter was applied to the clip correctly when I returned to the app’s main view. The app also crashed a couple of times seemingly at random. Fortunately, however, Snapthread now gracefully recovers from crashes by offering to restore your project when you reopen the app. Hopefully the issues I’ve had get fixed in an upcoming release, but it’s comforting to know that if you do hit a snag, the app can pick up where you left off.

Despite a couple of bugs, I’ve really enjoyed Snapthread’s new functionality. More than ever, sharing is about more than just photos. With the popularity of Snapchat, Instagram, TikTok, and other services, Snapthread is a handy way to pull together Live Photos, videos, and stills into a single video with an aspect ratio that works with whatever service you’re using. The app works just as well though for creating a montage of clips for sharing over email or Messages with friends and family too. It’s that flexibility that makes Snapthread an app I’ve kept on my iPhone since I reviewed it last year, and with the iPad-specific additions to the app, I plan to use it more there too.

Snapthread 2.0 is available on the App Store as a free download with a one-time $5.99 In-App Purchase that unlocks exports greater than 30 seconds, removes the Snapthread watermark from projects, and unlocks an alternate light app icon.