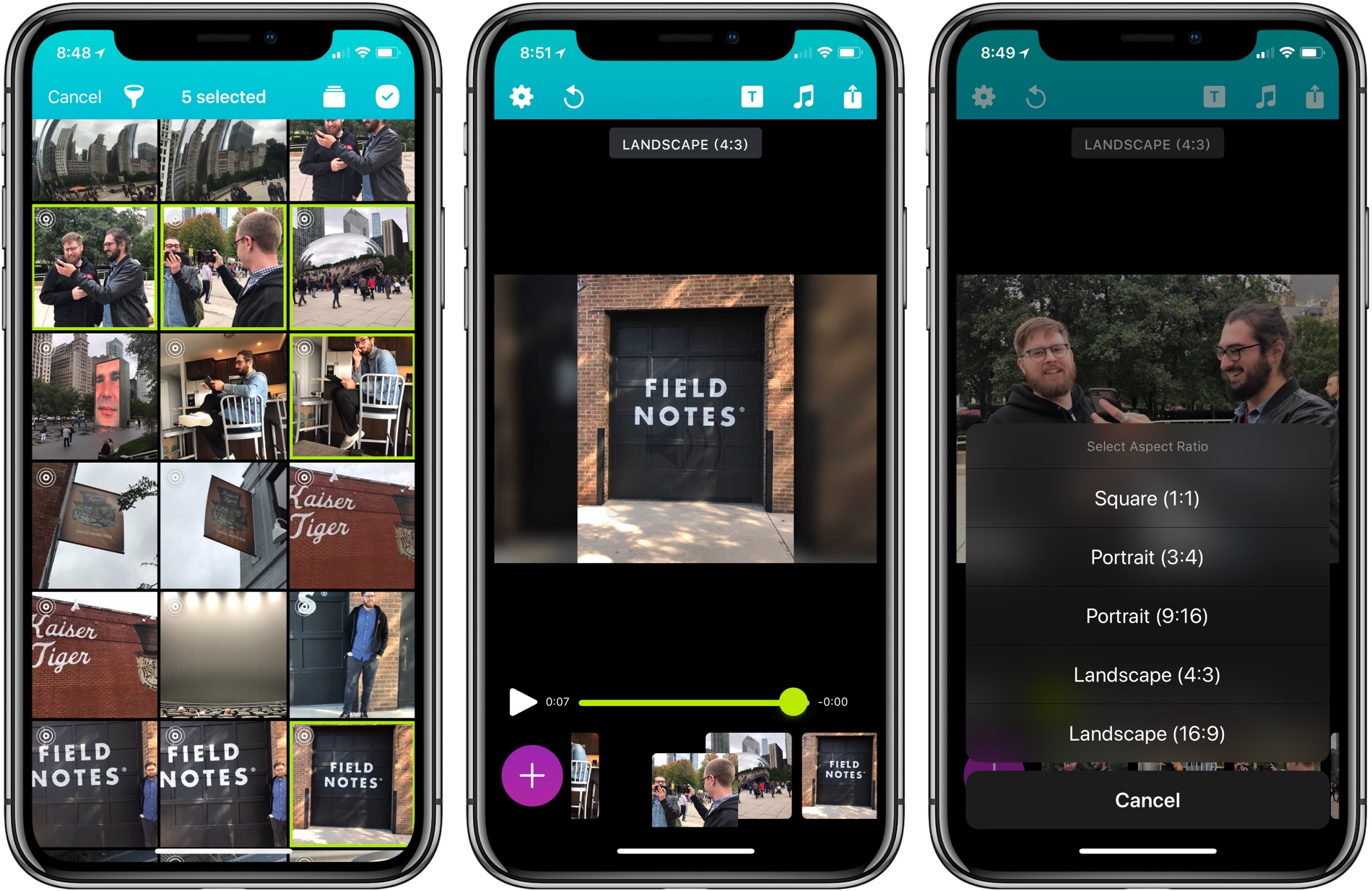 Becky Hansmeyer started building Snapthread to combine Snapchat videos. What she ended up creating is an elegant way to combine Live Photos and videos into short movies that are greater than the sum of their parts and perfect for sharing with friends and family.

What I love about the origin story of Snapthread is how much the app changed from its inception to launch, yet how close the resulting app remains to Hansmeyer’s original vision. That’s because at its core is a great idea: creating a better way to share life’s fleeting moments.

With version 1.5, Snapthread has grown into a mini iPhone video studio with a focus on making it as quick and simple as possible to assemble a video from several Live Photos or standard videos. The approach is smart. It’s easy to get caught up in filters, effects, and transitions when you’re editing video. There’s a place for that sort of app, and Snapthread lets you add things like a title card and overlay music, but what I like most about it is that the app’s focus on the basics prevents me from obsessing about my creation. It’s a design choice that makes me far more likely to create and share a clip.

The majority of Snapthread’s UI is contained in a single view where you assemble and preview your video. Tapping on the big plus button at the bottom of the screen opens a Live Photo and video picker. If you take a lot of videos and Live Photos, you can narrow your choices with the buttons in the toolbar to access a specific album, exclude Live Photos, and filter videos duration. From this view, you can also preview each video before picking it using 3D Touch. 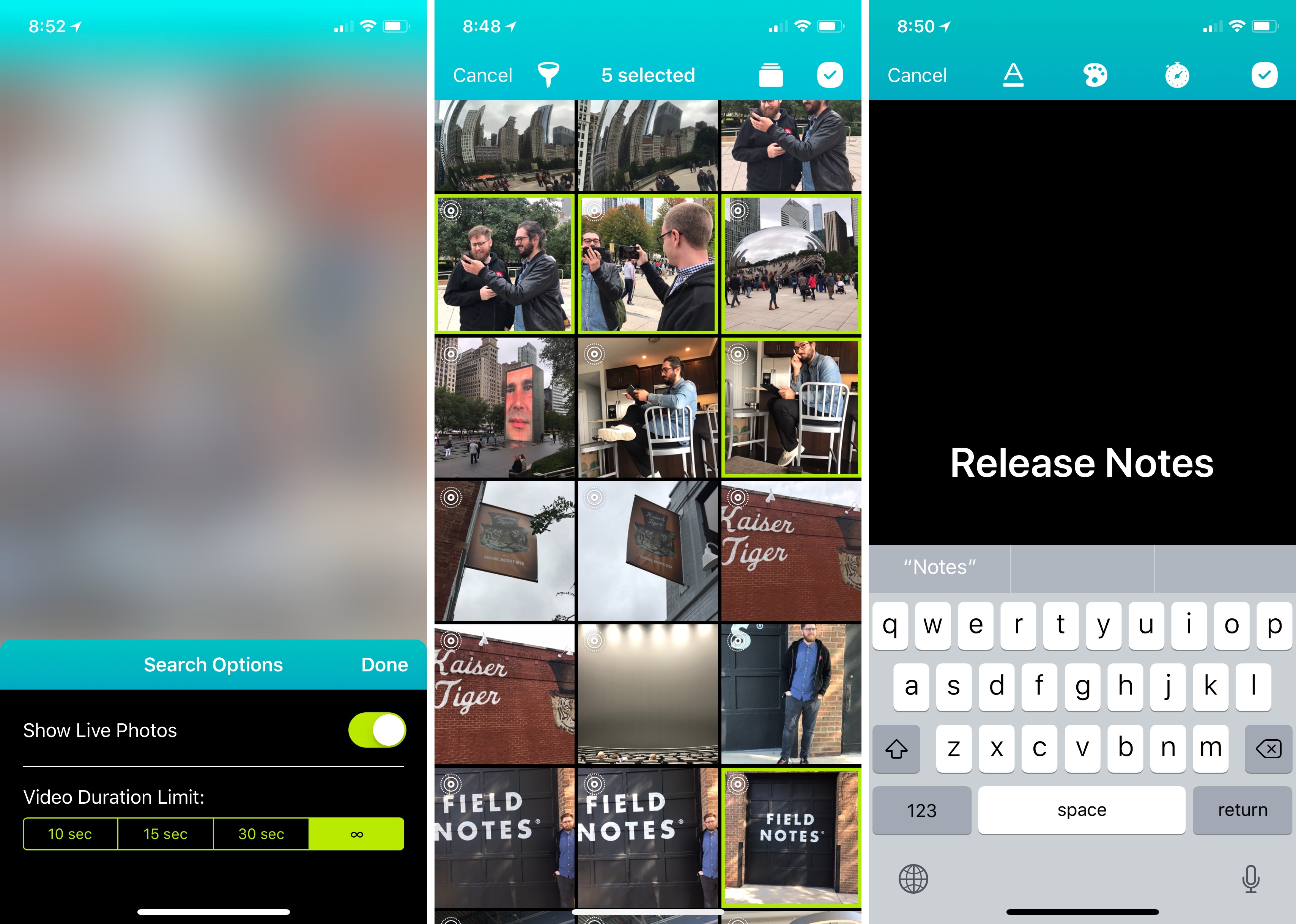 Filtering and picking clips, and creating a title card.

Tapping the checkmark button in the top right-hand corner of the picker screen returns you to Snapthread’s main UI. Beneath a preview of your draft creation is a play button, scrubber, and thumbnails of the videos you imported.

The thumbnails along the bottom of Snapthread can be reordered by dragging them. As you drag each clip, it lifts up with a satisfying tap from the haptic engine on compatible iPhones, instantly remixing the video in the preview window above. This is one of my favorite features of Snapthread because I don’t have to visualize the order of my clips when I’m picking them. I can simply pick the best ones and play with their order when I can see how they fit together.

The iPhone does a fairly good job of cutting off a Live Photo’s video when you lower your phone, but it’s not perfect. Often a clip will include some shaky, unwanted video at the beginning or end of a clip. Snapthread addresses that by letting you trim individual clips. Tapping a clip reveals buttons to delete it, mute the audio, or trim it. The trim feature opens up a modal view of the clip with drag handles at either end to pick just the part you want. 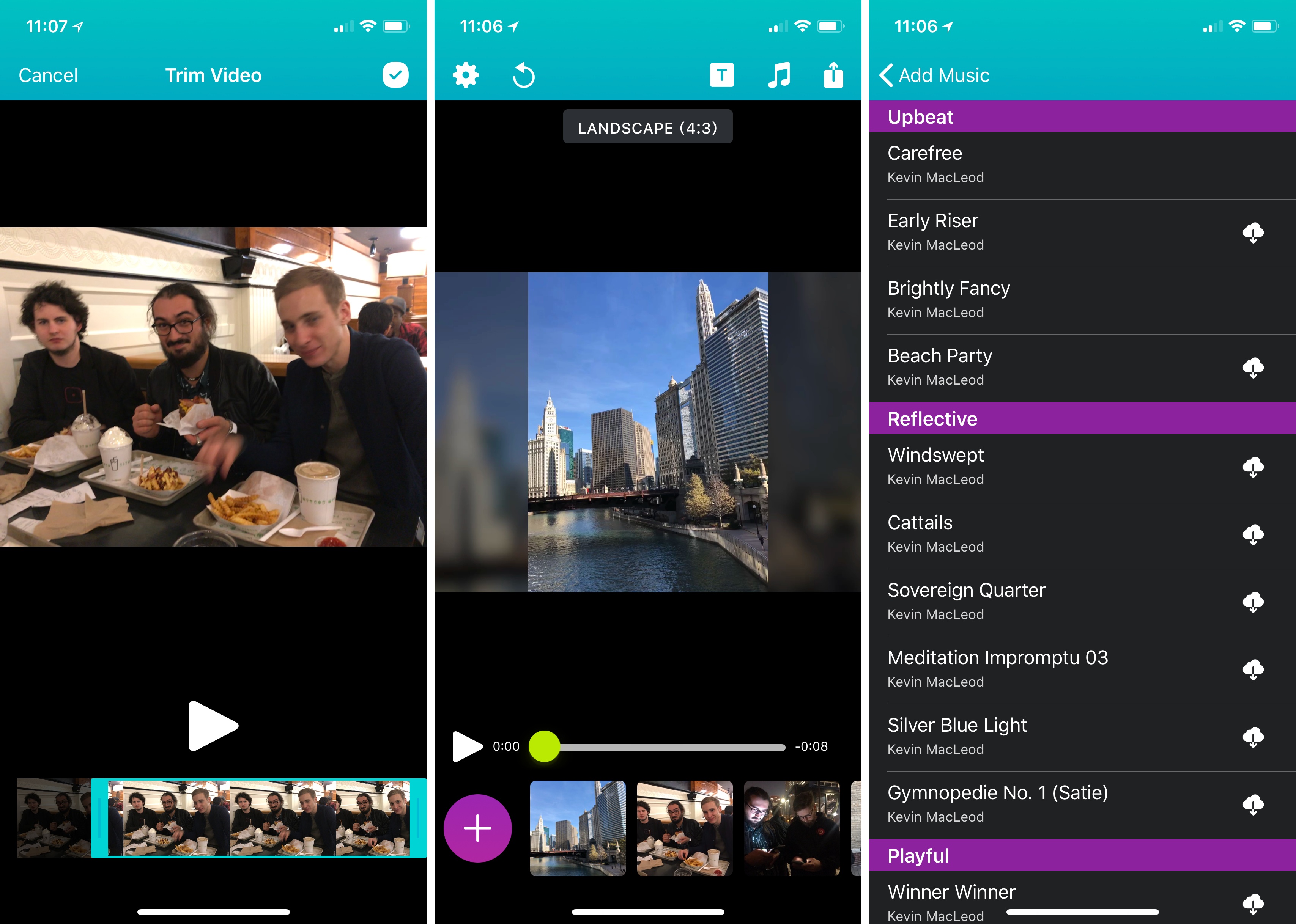 The toolbar along the top of the main view includes additional functionality. There’s an undo button for clearing all videos from a project and starting over, a text button for adding a simple title card to the beginning of a clip, and a music button for adding music from your library or a selection of stock music. The color of the text and background of the title card as well as its duration are adjustable, but you are limited to one font and solid color backgrounds. That limits personalization, but it also helps prevent you from endlessly fiddling with a project.

It’s worth noting that adding music from your collection is limited to music that’s stored locally on your iPhone. If you’re like me and stream most of your music, you’ll want to switch over to the Music app and download any song you want to use, so it’s there when needed.

A Snapthread video from the Release Notes conference in Chicago.Replay

Another adjustment you can make to a project is its aspect ratio by tapping the button just below the toolbar. Snapthread supports square videos, which are useful for services like Instagram, portrait in 3:4 and 9:16 ratios, and landscape in the same ratios. If you pick the square format, you can adjust the cropping for individual clips by tapping on them in the timeline at the bottom of the screen. Switching between aspect ratios is non-destructive, so you can test the look of each without fully committing to it.

The final step is sharing. You can set Shapthread to automatically save your creations to your Photo Library when you tap the share button, but I’d advise against that because I ran into a bug that caused sharing to certain other apps like Messages to fail. A fix is in the works for a future update, but for now, I suggest picking ‘Save Video’ from the share sheet first if you want a copy of a clip for yourself, then tap the share button again to share it using another app.

What I didn’t expect when I started using Snapthread was how much it would enhance Live Photos and short videos. If you send someone a handful of Live Photos from an event, they can tap through them and view each as an individual clip, but combining the clips into a short movie is much more compelling. It lowers the barrier for the recipient, who only has to tap one video to enjoy your creation, and it adds context and continuity that is lost with sharing Live Photos separately. Best of all, making movies in Snapthread is easy, which makes me more likely to share my memories with others.

Snapthread is available on the App Store for $1.99.