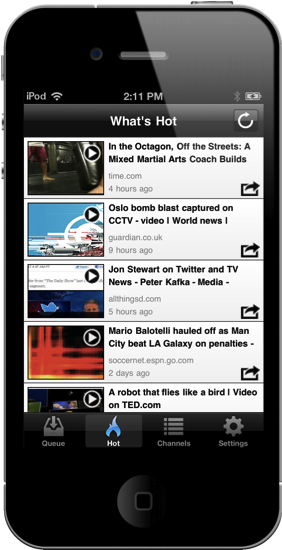 Skyfire has a new Flash player on iOS that queues up video you want to play on your iOS device by sending the video request through email! Yeah it’s old technology meets… old technology, but lets not dwell on the fact that we do want to watch Flash videos, and that iOS can’t play them. You have your YouTube and your Hulu, but those Funimation videos aren’t gonna play themselves. So whether you see a Flash video on the latest startup from TechCrunch, or you want to watch a segment of The Daily Show, VideoQ is there to convert your Flash video to a format compatible with your iPhone or iPad.

I gave VideoQ a chance on my iPod touch, and the first thing Skyfire asks is for you to send an email from an address you want to register with the company. Also sent in the email is your devices unique ID, which I find somewhat odd. I think that’s a bit skeevy, and I don’t know why Skyfire needs a device identifier, but it’s whatever right? With the email sent, you wait a few seconds to be registered, then VideoQ presents you with a tutorial you can watch to learn about the app.

So it breaks down like this: whether you use Safari or another web browser on iOS, you can email that webpage to Skyfire so you can playback that Flash video in VideoQ. VideoQ will show you the videos you’ve queued up (and you can also casually browse hot videos via the appropriate tab). Video playback isn’t spectacular: video is grainy, audio is muffled, and sometimes Skyfire can’t find the video, but in a pinch you can get your Jon Stewart fix on your iOS device. It’s not a replacement for a Mac or PC that can run Flash well, but it can give you some relief while traveling or when mobile. It works most of the time — it’s not perfect — but video is passable despite whatever conversion process Skyfire processes on their servers before serving the content back up to you on demand. I’d say if you watch a lot of flash video (and especially if you want to do it on the iPad), give VideoQ a try.

Skyfire’s VideoQ is $1.99 as a universal app in the App Store.