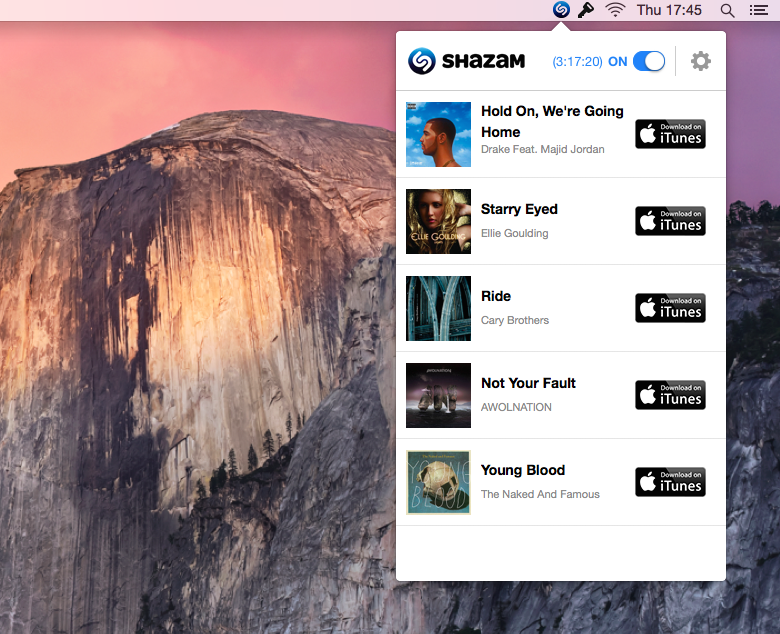 I was surprised to hear last week that Shazam, makers of the popular music recognition app that’s going to be integrated with Siri in iOS 8, had launched a desktop app for OS X, available for free on the Mac App Store. I always associated Shazam with the portability and instant-on nature of the iPhone: you hear a song playing, you want to know what it is, you pull out Shazam and let it work its magic. That’s why I’ve never managed to get used to Shazam on the iPad and why I seldom use all the features that the company has tacked onto the app over the years: fundamentally, I see Shazam as the music recognition app for iPhone, and that’s it.

I have, however, found a handy role for Shazam in my Mac’s menu bar: music recognition for TV shows. My girlfriend and I watch a lot of TV shows in the evening, and, over the years, we’ve developed a habit of keeping an iPhone next to us so, if a cool song comes up in the background and we want to know its name, we can quickly fire up Shazam without pausing the video. My Shazam library is mostly a collection of songs I’ve heard in TV shows and movies, with a couple of gems found in Apple’s commercials and while shopping inside a store (H&M in Rome has some cool playlists, I’ve learned).

I realized that Shazam could be useful on my Mac when we were watching a show a few days ago and the app displayed a notification for a song it had recognized. Shazam for Mac lives in the menu bar, listening to audio in the background; it has no “tag” button, and when it finds a match, it shows a native notification and it adds a song to its popover, allowing you to click it to view the song on Shazam’s website.

Shazam can run uninterrupted in the background for four hours at a time, and it can automatically start listening when you log in; if its background time expires (there is a countdown in the app), you’ll have to click a toggle in the popover and turn it back on. (Here’s a support document by Shazam explaining how they don’t store your conversations but only matched music.) The other day, Shazam worked because I installed it a couple of hours before relaxing with some TV shows; the following morning, the app had stopped in the background.

Quality of results has been on par with Shazam’s offerings on iOS: the app found 90% of the songs that played on my Mac, and when it missed something, it was because a) there was dialogue over the song or b) the song was a cover version for the TV show (like an acoustic version). Impressively, Shazam can listen to audio coming through the built-in speakers as well as headphones connected to your Mac – if you’re watching a movie with your EarPods on and Shazam is running, it’ll still find songs for you.

I’m disappointed by the way Shazam handled interaction with songs on the Mac. As I said, I don’t use many of the extra functionalities the company has added to the main iPhone experience over the years, but I appreciated the inclusion of full Rdio playback and I rely on its native app integrations. On OS X, you can either open the song on the iTunes Store or view it on Shazam’s dedicated webpage, which has links to buy it on Google, lyrics, charts, and other cruft that doesn’t actually do anything with the recognized song. I consider Rdio playback to be a fantastic addition to the iPhone app as it fits seamlessly with the core Shazam experience, and it’d be nice to have it on the Mac as well.

I’m positively impressed by Shazam’s debut on OS X, primarily because I didn’t think I’d ever use the app when I first read the news. I’m concerned about forgetting to relaunch the app after four hours, but I’m going to keep using Shazam on my MacBook Air to find songs when I’m watching movies, TV shows, commercials, and other web videos.

Shazam for Mac is free on the Mac App StoreFree.