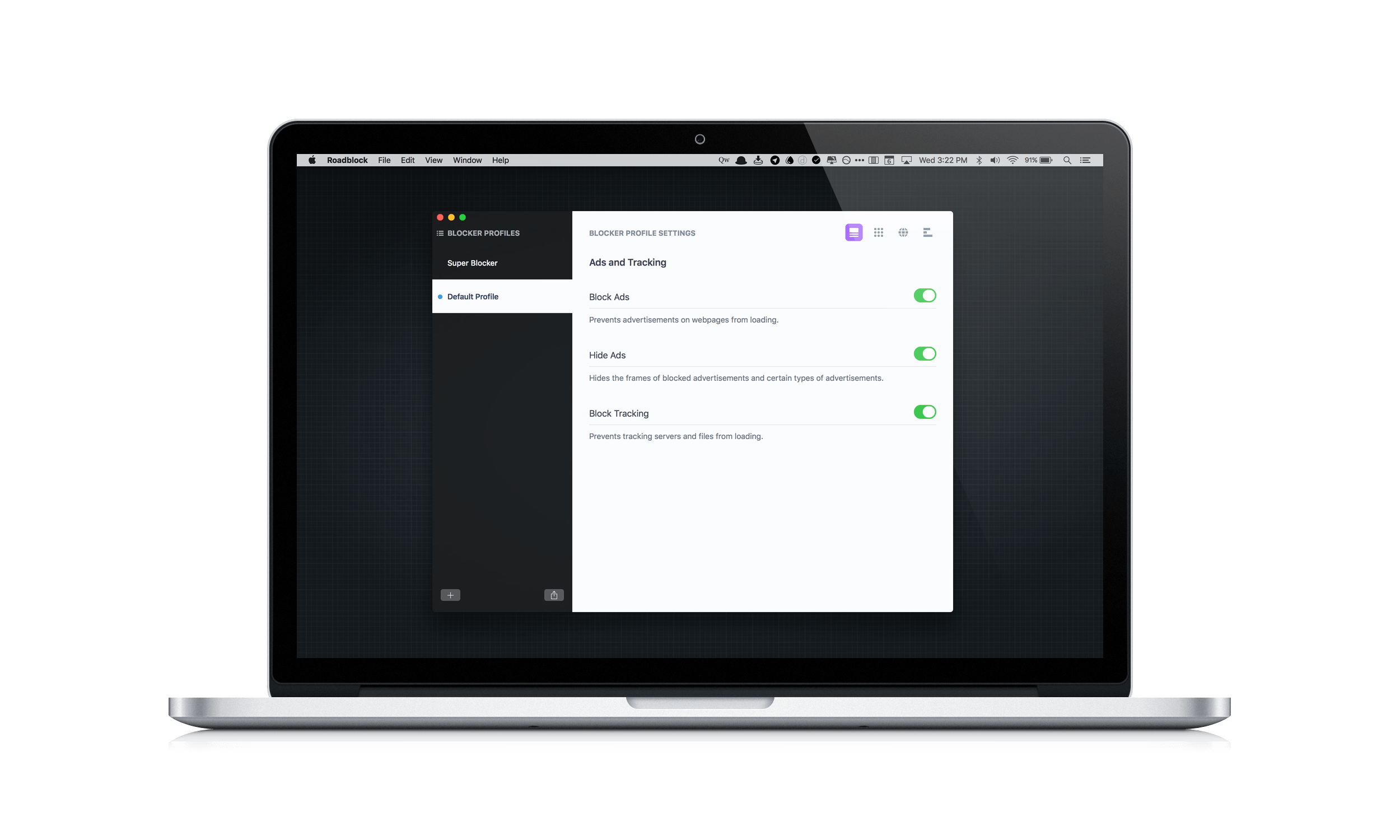 Content blockers arrived with a splash on iOS last Fall when iOS 9 was released, but have only recently begun showing up on the Mac App Store. Last month I reviewed 1Blocker, a Safari content blocker that replicated its successful iOS app on the Mac. Today, Obied Corner released Roadblock for Mac, which takes its iOS content blocker and adds some compelling new features. What makes Roadblock unique, is its focus on profiles, allow you to set up different sets of content blocking rules for different use cases, and its simplified approach to creating complex custom rules. Despite a few limitations that I discuss below, these two features make Roadblock extremely powerful and an excellent choice if you are looking for a content blocker for your Mac.

Roadblock includes roughly 38,000 built-in content blocking rules that are divided into four top-level categories, each of which is further subdivided with a clear explanation of what each sub-category does. Each set of rules is turned off by default, but can be turned on by toggling the switches next to each collection of rules. After you set up Roadblock the way you want, you can close it and let its Safari extension take over because the two stay in sync. 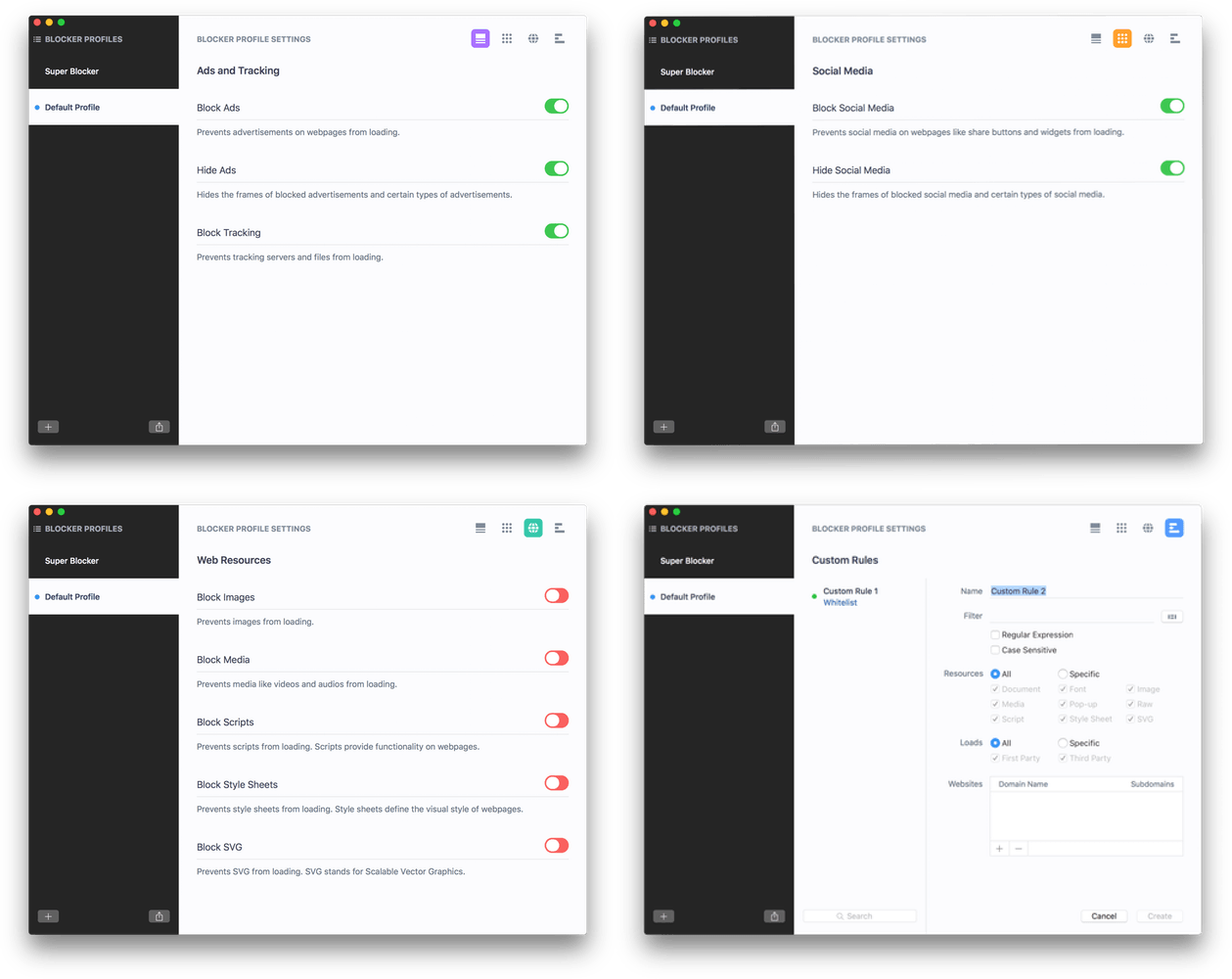 Roadblock is organized into four groups of rules.

Under the Social Media section, you can block things like social media widgets and share buttons from displaying. This section also lets you hide the frames of the blocked social media items.

The Web Resources section is subdivided into Block Images, Block Media, Block Scripts, Block Style Sheets, and Block SVG. I won’t go into each item, but suffice it to say that if you enable all these rules, what you’ll get is a site that is lightweight, but ugly. Personally, I wouldn’t turn the Web Resources rules on with any regularity, but they could come in handy if you are doing something like tethering your Mac to your iPhone and are trying to conserve expensive bandwidth.

The final section is dedicated to Custom Rules, which is one of Roadblock’s most powerful features. There are four categories of rules that can be created. ‘Block Loads’ can block nine different types of resources from loading. ‘Block Cookies’ prevents first and/or third party cookies from loading. ‘Hide Elements’ lets you block webpage elements from loading by specifying their selectors. You can also whitelist specific domains. Each type of rule can be set up by domain and optionally include all subdomains. 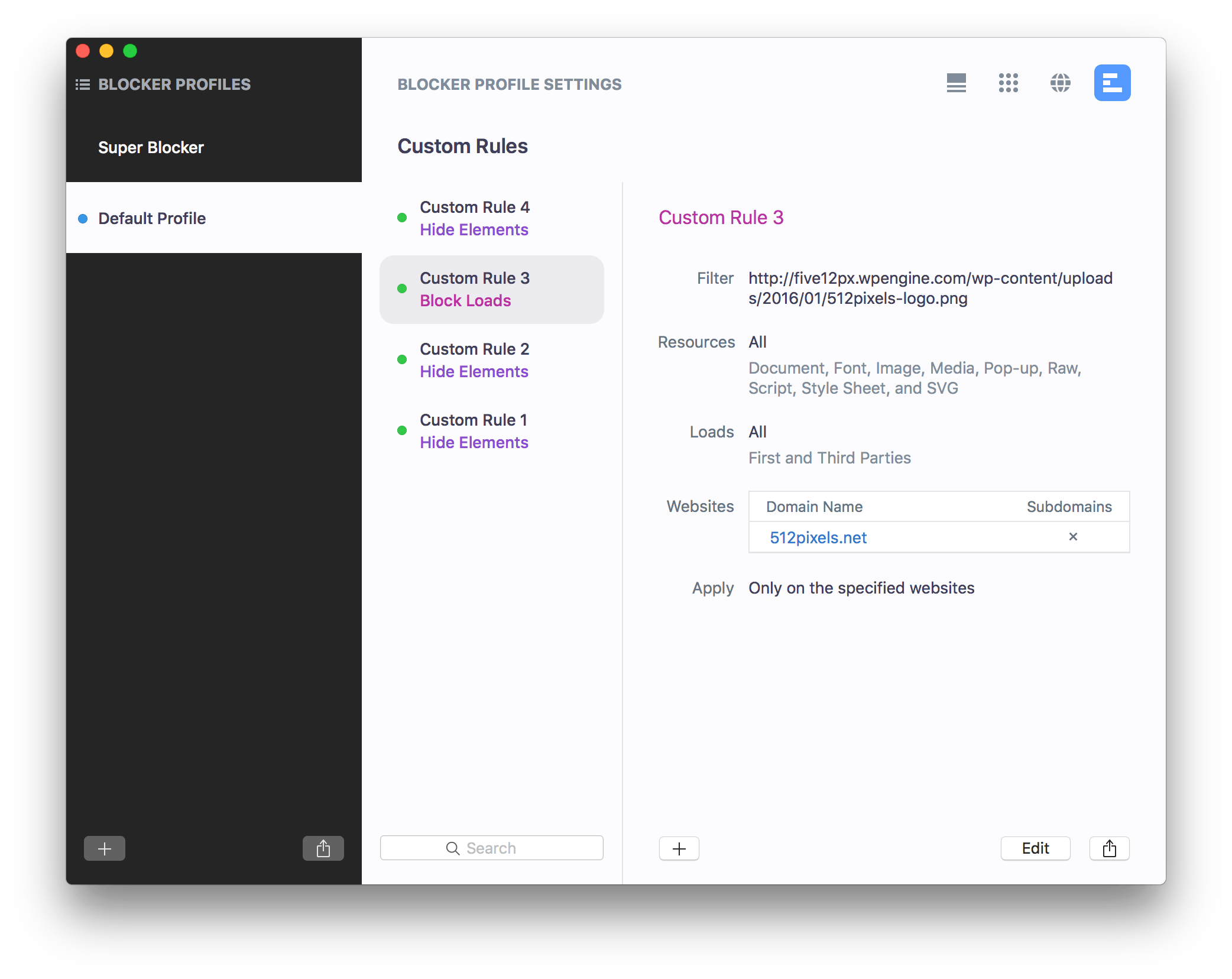 If you know what you’re doing, Roadblock includes all the custom rule fields and options you need to create complex blocking rules, but there’s an easier way to set up rules. Roadblock’s Safari extension lets you block and whitelist sites you visit from a drop-down menu or block and hide items visually. Blocking and hiding items visually is a feature that sets Roadblock apart from other content blockers I’ve tried because you can create complex rules without knowing anything about regular expressions or the structure of webpages.

Setting up a series of rules visually is as simple as clicking on webpage elements one at at a time. Roadblock does the hard work of creating the regular expressions and identifying the selectors of page elements for you automatically. When you are done selecting elements to block and hide, click the Safari extension again, select ‘Done,’ and the page will reload with your new custom rules activated. In the screenshots below, you can see how I hid the banner art and featured stories on MacStories and the rules Roadblock created to accomplish that. 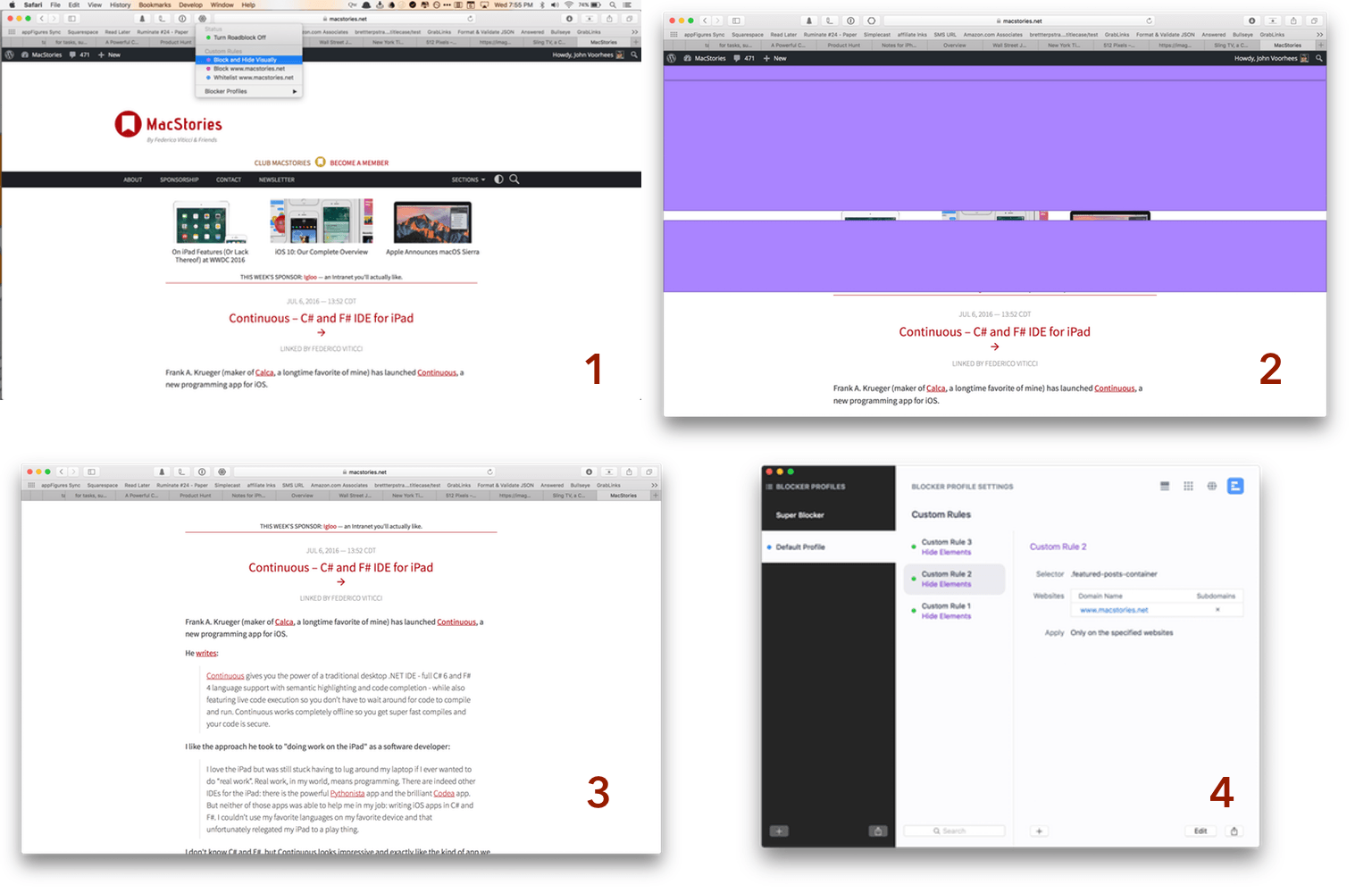 (1) Pick ‘Block and Hide Visually,’ (2) Select items to block and hide, (3) Click the extension again and select done to remove elements, and (4) Roadblock creates the custom rules for you.

When rules are created or modified in Roadblock, the changes are detected by the Safari extension, which reloads the current tab with the new rules. If you have multiple tabs open and switch to another tab, you will have to reload it manually to see the effects of any new rules. Although this may not be ideal for some people, the approach strikes me as better than reloading every tab at one time, especially if you have a large number of tabs open, as I often do. However, because the benefits of reloading all tabs at once will depend largely on the number of tabs you have open, this strikes me as an area where the inclusion of a preference to reload all tabs at once is warranted.

Profiles are the other marquee feature of Roadblock. With profiles, you can create different sets of rules for different contexts. You might want to severely limit certain bandwidth hogging resources if you are tethering your Mac to your iPhone, for instance, but be less restrictive when you’re on your home WiFi network. One nice touch is that you can duplicate profiles so you can set up a new profile based on an existing one without having to flip multiple switches and create a bunch of custom rules from scratch that you want to include in both profiles. You can also share profiles using the OS X system share sheet so that someone on another Mac can use the rules you have created. 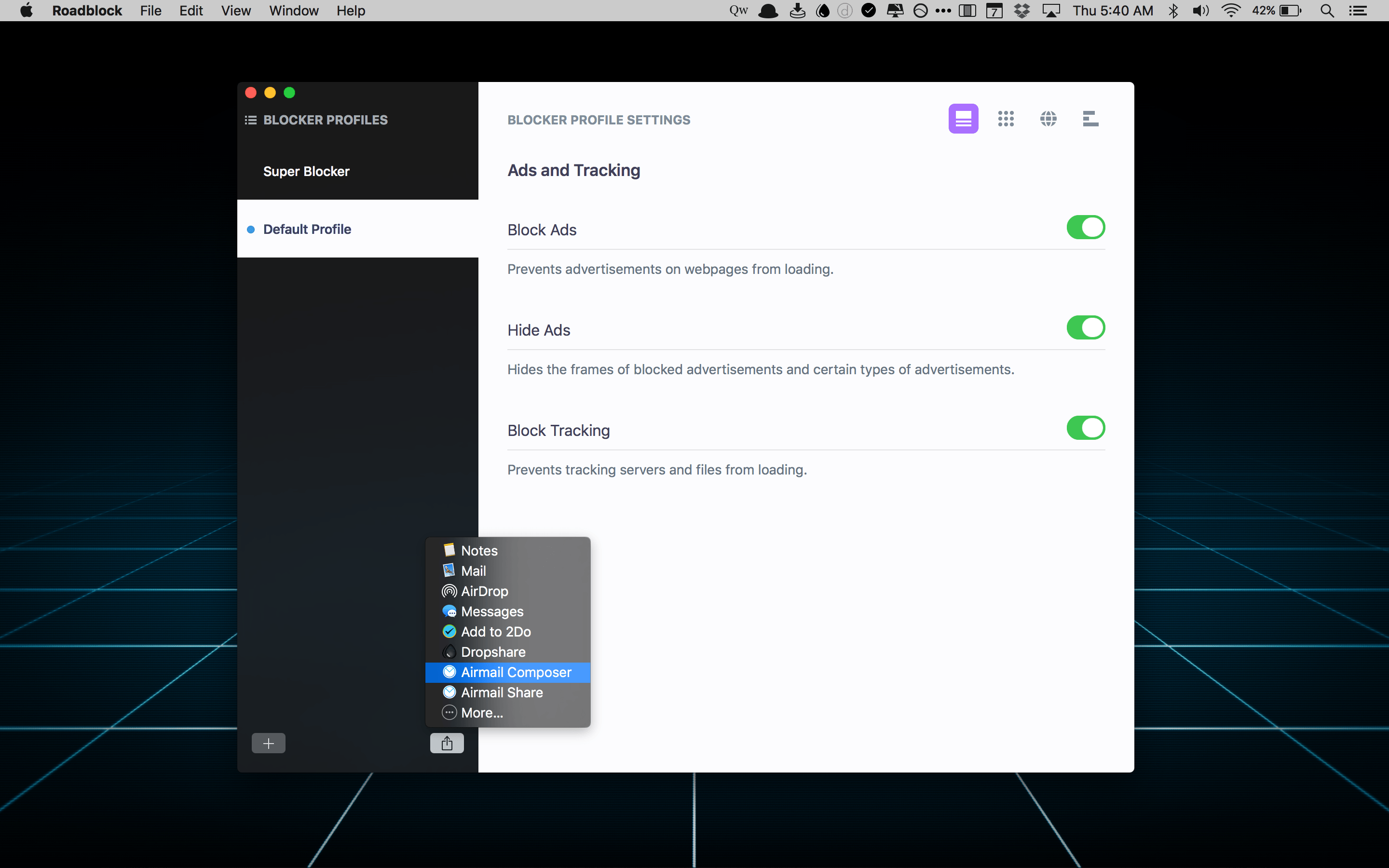 Sharing profiles and rules with the OS X share sheet.

When you open Roadblock, it displays the last profile you viewed when the app was closed. One thing I would like to see added is an option to open the app to the profile that is currently active in the Safari extension because if you lose track of which profile you have activated, it’s easy to open Roadblock and start making tweaks to the wrong profile.

Unlike 1Blocker, you cannot turn each of Roadblock’s 38,000 rules on and off individually, which may be a deal breaker for anyone who wants fine-grained control over the rules that are built into their content blocker. I suspect, however, that like me, most people will appreciate that what Roadblock lacks in control, it makes up for in simplicity and clarity.

Perhaps the biggest current limitation of Roadblock is the lack of sync between the Mac and iOS versions. An update to the Roadblock iOS app is in the works that will bring most of the Mac app’s features to iOS, including the ability to share blocking profiles and rules from the OS X version of Roadblock to iOS using the OS X system share sheet. That’s not the most convenient way of sharing profiles and rules, but it is my understanding that a proper sync solution is also on the roadmap for Roadblock.

Despite the lack of syncing among Macs and iOS devices, the simplicity and power of profiles and the ability to create custom block and hide rules visually, make Roadblock is my new favorite OS X content blocker. It is important to note, however, that syncing rules is not critical to me. Nor do I feel the need to have access to each of the 38,000 rules built into Roadblock. If either of those two things is important to you, take a look at my review of 1Blocker, which syncs and lets you turn individual rules on and off.

The Roadblock Safari extension is free and can block ads, regardless of whether you purchase the app. For the remaining features to work, you can purchase Roadblock from the Mac App Store for $14.99. Roadblock for iOS is available on the App Store for free with a $1.99 in app purchase that unlocks its full functionality.