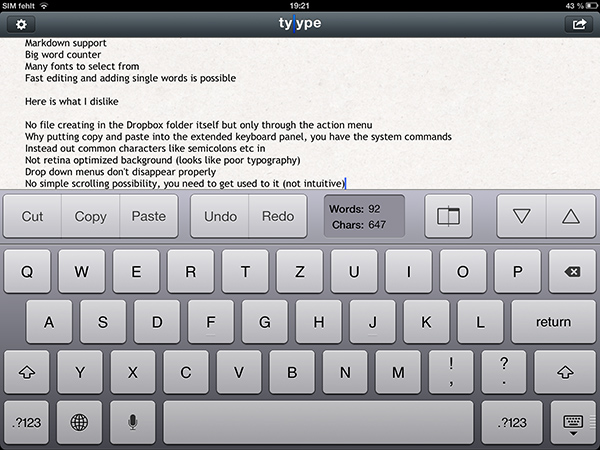 Text editors on iOS are always difficult to review. More or less everyone who writes on a computer or other digital device has a favorite mobile and desktop text editor, and is accustomed to the workflows connected to it. To give an example, I am totally in love with iA Writer. Its easy iCloud sync options, readable typography, and Focus Mode fit my needs. I don’t need Markdown, lots of different fonts, or an extensive amount of settings. I just want to write, and with iA writer I found the perfect, distraction-free environment to do so.

However, when I recently discovered Tyype, a new iOS text editor by Polish app development company Appvetica (who also developed apps like QRSight, an OS X QR code scanner), I got curious. Their clean, minimalist website and product video promise a text editor with easy text navigation, selection, and copying using custom gestures. Its interface seemed easy to understand, and the icon looks gorgeous. So I went ahead, downloaded Tyype HD for the iPad (which I’ll refer to as “Tyype”) and starting writing with it. Unfortunately, I have to say that Tyype does not work as great as it is shown in the demo video on the app’s website. But it’s certainly not a bad app either.

If you launch the app, you’re greeted with a simple screen: a top nav bar with sharing and settings buttons, a large text area, and an enhanced on-screen typing keyboard. As a longstanding user of iA Writer I know where this layout, the way the keyboard is enhanced with additional buttons, and the logo displayed in the center of the top nav bar come from. Tyype’s UI looks a bit too inspired by iA Writer. After launch, an introductory text file with all of the important features, gestures, and settings Tyype has to offer is displayed — I will cover all of them in a bit.

My suspicions that Tyype is a bit too inspired by iA writer is substantiated when you create a new document. You do so by tapping on the options button in the top left corner. Tyype uses local storage as the primary way of saving new documents. The app can be linked to a newly created “Typpe” folder in Dropbox, and you can move locally saved files into it using the share button in the top right corner. You cannot create files directly in the Dropbox folder in the current version. There is also no support for iCloud yet, which in my opinion is a bad decision. I store none of my text documents on locally, neither on my iPad, nor on my Mac, so in its current state Tyype is not a real alternative to iA Writer for me. 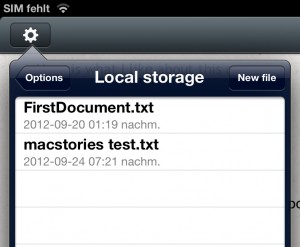 When you create a new document, you can immediately begin typing. Writing with Tyype is fast, reliable, and without hitches. The on-screen keyboard features an additional row above the default keyboard (just like other iOS text editors including iA Writer). It’s different from other apps though: it does not contain commonly used characters like parentheses or colons, but rather often needed actions like cut/copy/paste, undo and redo, and jumping to the top or bottom of a document. You can toggle a full-screen editing mode for focused typing. The additional keyboard panel also boldly displays the word and character count, which to me is a very welcomed decision — I dislike the small word count in iA writer, as it is hidden in the top nav bar and does not always reload properly.

However, I do not understand why the developers at Appvetica added the cut/copy/paste commands to the keyboard since they’re built into iOS. In my opinion they should have used the space for easy word or paragraph navigation. This would have been more useful, since the custom gestures for text navigation restrict the user’s ability to quickly move through large documents. 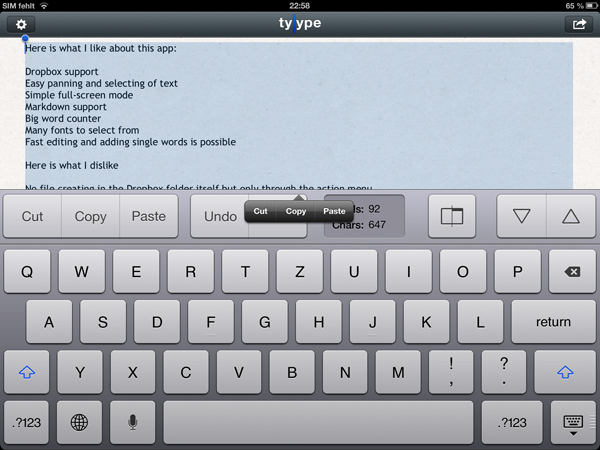 Tyype offers several gestures for easy text editing. By dragging a single finger horizontally over the screen you can easily pan through your text, and using three fingers you can do so even faster. The purpose of Tyype’s custom cut/copy/paste buttons may be related to the two finger drag gesture, which is supposed to help you precisely select text. You can also double tap with two fingers to select the whole text. While the selection gestures are awesome in theory, and I wish other text editors would explore similar possibilities, the one finger gestures can be confusing. The problem with one finger panning is that it makes scrolling useless. Since both functions are connected to the same gesture, the guys at Appvetica disabled the scrolling option to implement their custom interaction. 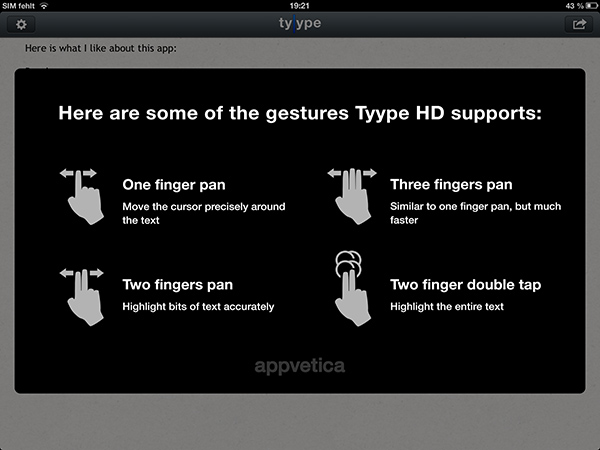 I think it’s clear why they should have considered adding word or paragraph buttons onto the keyboard instead of the cut/copy/paste commands. You can’t easily switch between multiple parts of a text — just to the top or bottom using the large arrow keys. Additionally, the panning functionality works horizontally, but not vertically which makes it solely usable for precise in-line panning, but not for paragraph switching. There is no easy and intuitive way to vertically scroll through a large document, which makes Tyype very unsuitable for writing and editing large pieces of text. It works good for smaller text and notes though. Nevertheless, the user would still need some time to get used to the gestures and basic way of interacting with the app. I’ve used Tyype for three days now, and I still have problems working with it, which is a really serious problem. Luckily, the single-finger panning feature has some positives: it’s very easy to add single words to text and edit in-line mistakes.

Tyype features simple, versatile customization and sharing options. You can easily change the font and font size from the top left gear button. Tyype offers over 50 different fonts including serif, sans-serif, monospace, note-taking and even dingbats typefaces. Using the share menu in the top right corner, you can email your text or send it as a mail attachment (Tyype exports into simple .txt files), print it out using AirPrint, or send it to your Dropbox folder. For all web publishing nerds Tyype also offers Markdown support. Simply write your text including Markdown commands and tap on the “Markdown to HTML” option in the share menu when you’re done. A HTML preview panel comes up in which you can see how your styling affects the file. You can send the created HTML file as a mail, a mail attachment, or to your Dropbox folder, just like you can share non-Markdown text documents. 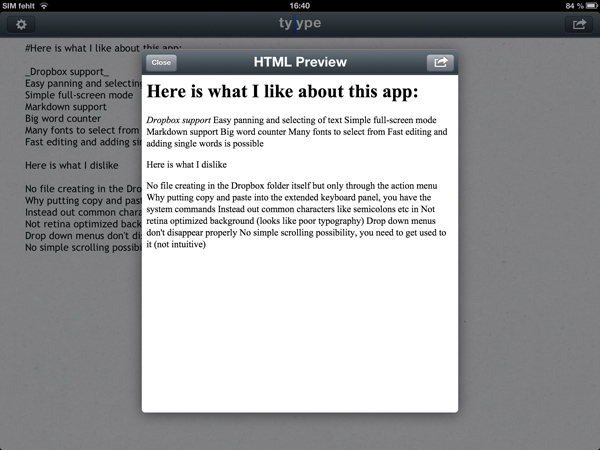 These are all the features Tyype HD currently has to offer, which finally brings me to the app’s design. UI-wise, Tyype is a mixed bag. The navigation bar features nicely crafted buttons, and there are cool pictograms integrated in the drop-down menu’s list elements. The app is clearly laid out and visually easy to navigate. Unfortunately, there are some really annoying flaws that often make the user experience a bumpy ride. Firstly, the UI elements are all optimized for Retina displays, which is good, but the textured background image of the text display area is not. It looks like the developers casually implemented it without really caring for how it looks. It destroys the otherwise solid typographic layout of the app. Just make the background white or color it using an unobtrusive sepia tone, and you’re good to go. Laying images behind text is always a difficult task, since you have to make sure that they do not distract the user from the app’s purpose — which is writing, and not looking fancy. 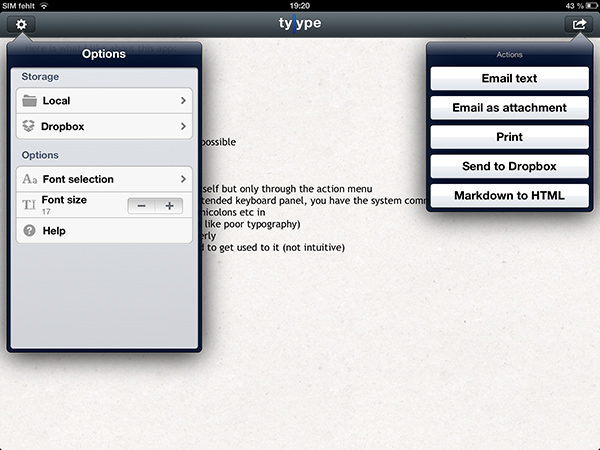 Additionally, the drop-down menus don’t disappear properly, which makes it a mess when changing options or sharing text while writing. When you activate the option menu, change something and then tap on the sharing button to export some parts of your creation, the options drop-down menu doesn’t disappear. The result is an unorganized, cluttered screen. The situation is even worse when you open the sharing menu and tap on “Print”. The AirPrint menu appears, but without any back button. The obvious reaction of the user to go back to the sharing menu is tapping on the top right sharing button again. As a result from that, the sharing menu opens up which is the expected behavior. But the print menu does not disappear. It is still actively displayed behind the sharing menu, resulting in a really ugly view of two drop-down menus stacked upon each other. The developers will hopefully fix this really soon. 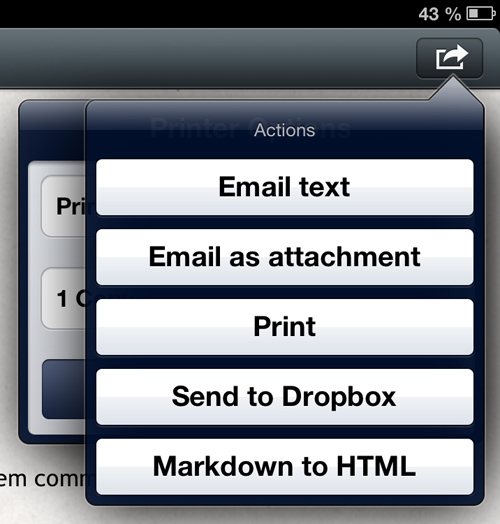 The third flaw restricting the app’s usability and destroying the coherence of the UI is the aforementioned full-screen editing view. When you toggle it using the respective button on the additional keyboard panel, the navigation bar moves away to let the text area to open up more screen space. But the additional keyboard panel with the extra commands and the word count also disappears. It indeed does so with a cool transition, but I honestly don’t understand why it’s necessary. I personally still need the commands integrated into the panel when writing in full-screen mode, especially the two arrows leading me to the top and bottom of my document when editing a longer piece (as you can’t scroll). 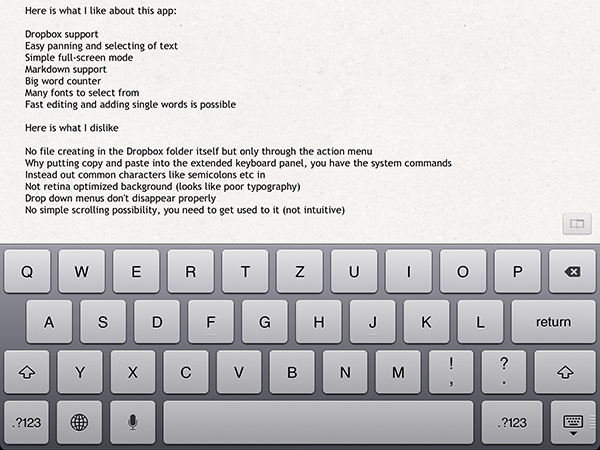 All in all, Tyype has too many flaws and lack many common features to be my favorite iPad text editor. Nevertheless, it features an all new approach to gestures in text editing. Some of them, like their double tap gesture which selects the whole text are very, very useful. And the other gestures, especially the one finger panning gesture, need to be rethought. I think if the guys at Appvetica fix the bugs I’ve described above and add iCloud or simplified Dropbox integration, Tyype could be a serious competitor to long-standing iOS text editors like iA Writer, Byword, Writing Kit or Elements. Its competitive price could also be a decisive factor then.

You can buy the iPad version of Tyype for $2.99 on the App Store.

The iPhone version with similar functionality is a free download from the App Store.