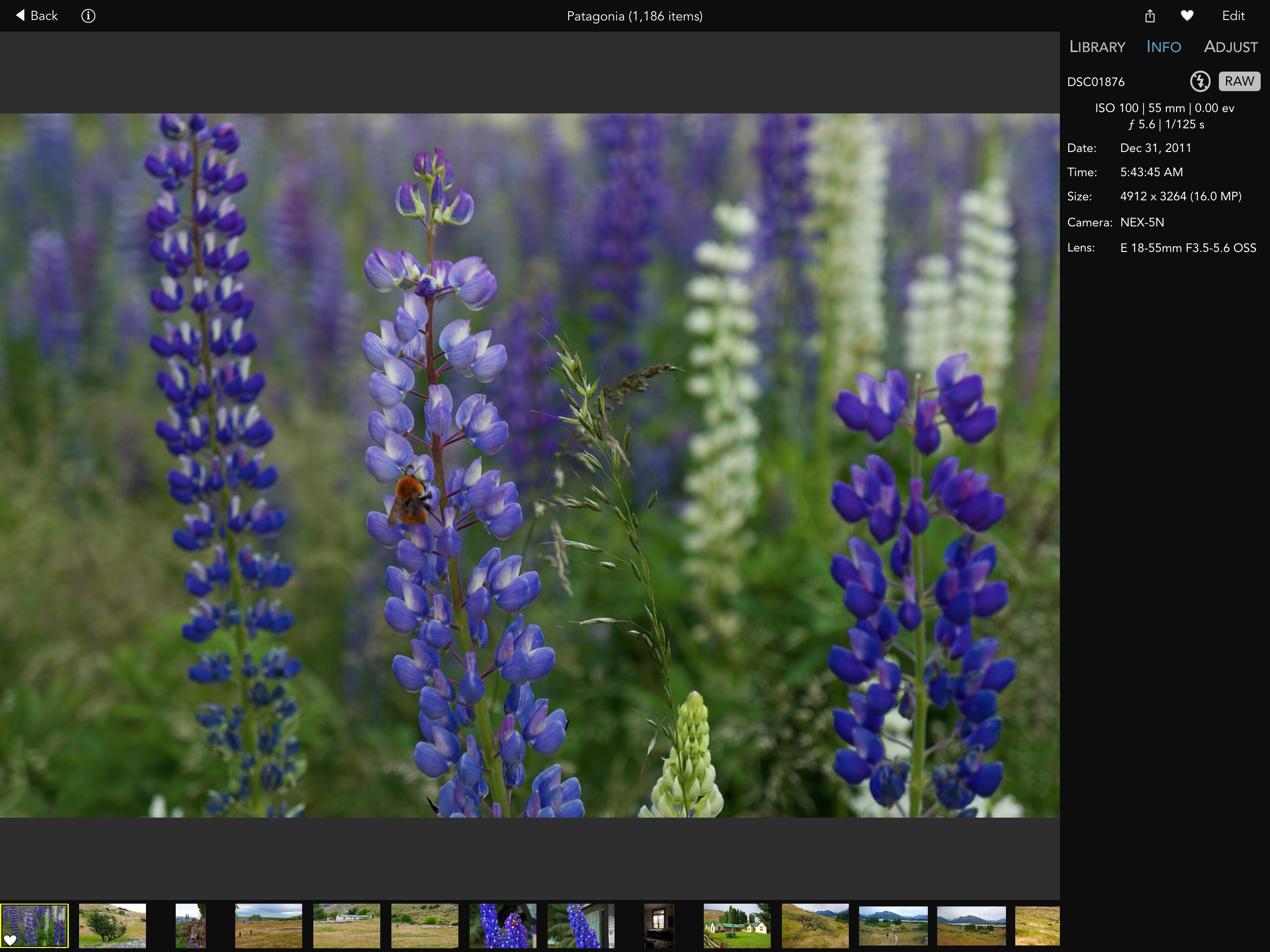 Earlier this year, I reviewed RAW Power for macOS and was impressed by its power and flexibility. Yesterday, Gentlemen Coders released a no-compromises version of RAW Power for iOS that matches the macOS version’s features and adds the ability to manage your photo library and make Depth Effect edits to Portrait mode photographs. There are a few rough edges here and there, but by and large, the app delivers on its promise of desktop-class, non-destructive photo editing on iOS devices.

The starting point in RAW Power is its Album view. From here, you can also organize your photo library. Albums are divided into three groups. The first section includes recently viewed images and albums. Built-in system albums like Favorites, Panoramas, Bursts, and Screenshots are found in the second section. The remainder of the view includes every album you’ve ever created in your photo library. Buttons in the toolbar allow you to create and rename albums, select multiple albums to delete, and search for albums by name. 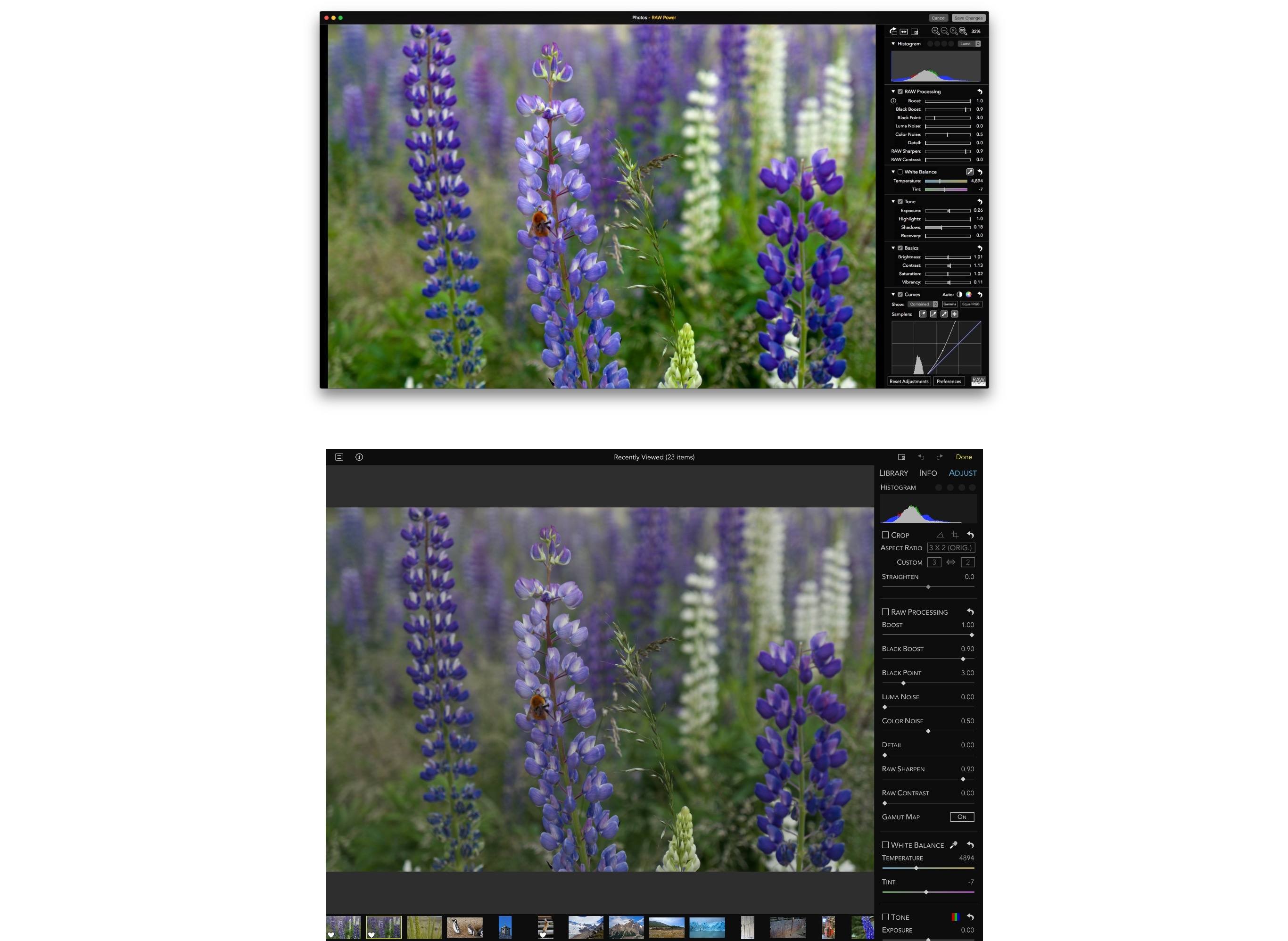 Changes made in RAW Power are synced back to Apple’s Photos app. If you use iCloud Photo Library syncing, edits are synced across iOS and macOS devices too. What isn’t synced though, is the state of the app itself. This means the Recents section of the Album view will be different on each iOS device on which you use RAW Power. This isn’t an issue on macOS because that version of the app doesn’t include library organization features.

When you open an album, the contents are arranged in a grid. Photos in the album can be sorted oldest to newest or the other way around. As you scroll, the date is overlaid to give you an idea where you are in an album containing lots of pictures, which is a nice touch. 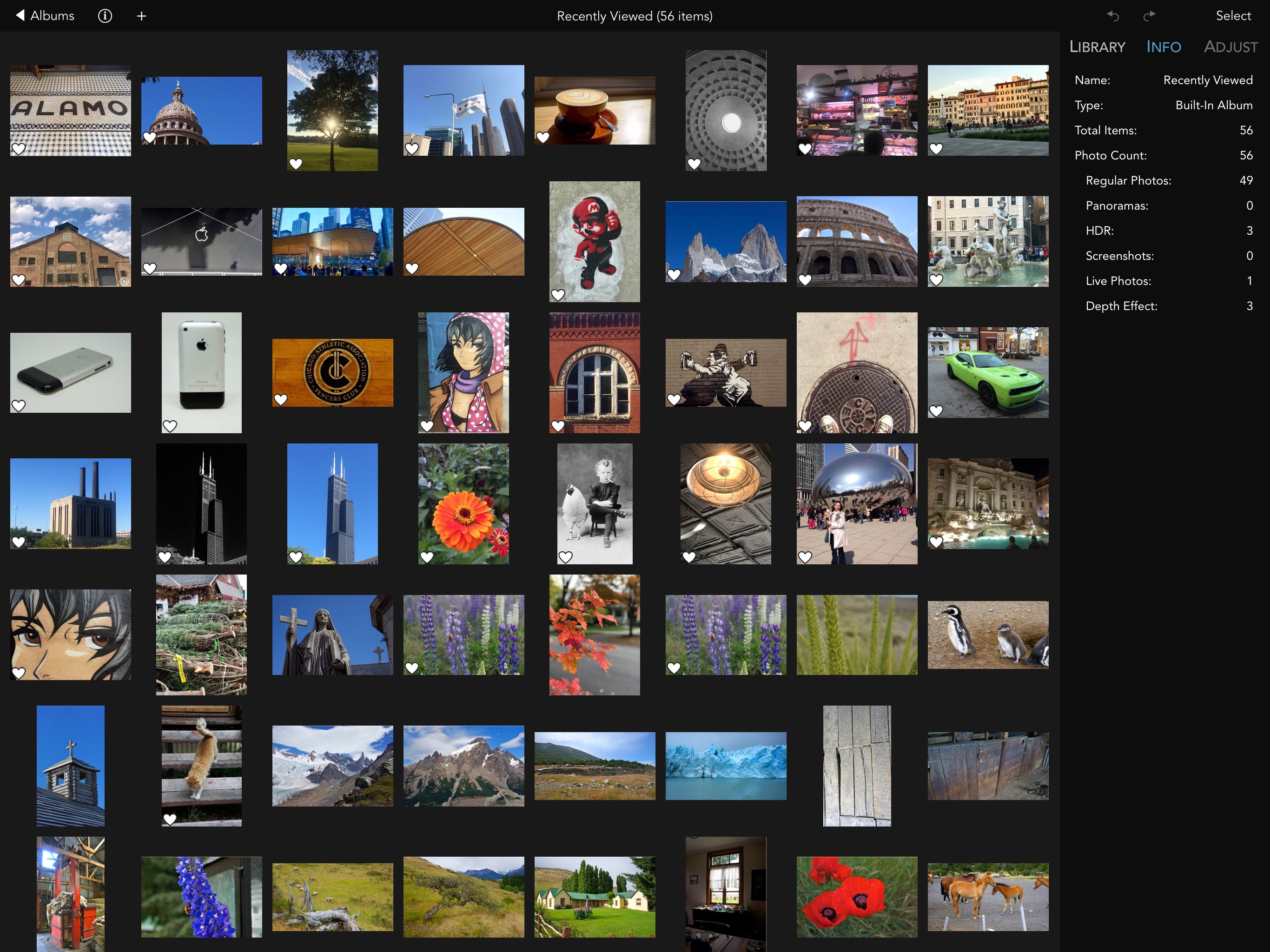 The info button in the top left corner opens an inspector that can be moved from one side of the screen to the other by tapping and holding the tab bar and then dragging it. While browsing an album, the inspector provides quick access to your album library and basic information about the selected album like the number of each type of photo it contains. When a photo in an album is selected, the Info tab shows metadata, including a map if GPS information was recorded. 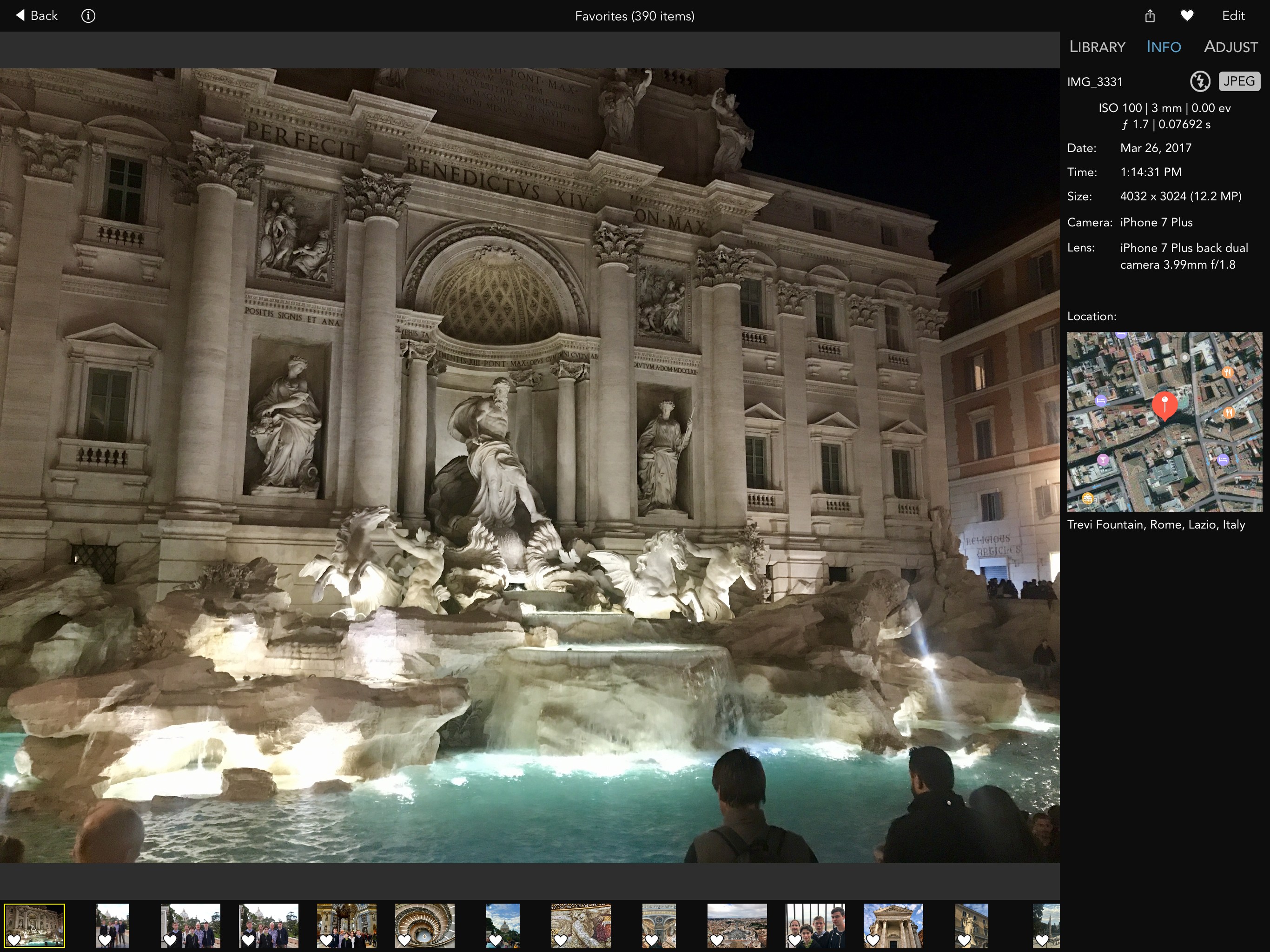 The album view also supports iOS 11’s drag and drop feature. You can pick up multiple images and drag them into an album in the inspector’s Library tab. Although you can navigate to another album while dragging several photos, you can’t drop them into the new album. Instead, you can only drop your photos onto the small album icons in the inspector. I hope Gentlemen Coders changes this behavior so you can drop images inside an open album because the current mechanic is confusing to anyone accustomed to the Files app where you can drag items, open a folder, and drop them in the new location.

The third tab in the inspector is the Adjust tab for editing images, which is only available when an image is open. Given the large number of editing tools in the app, I appreciate that RAW Power only displays the ones that work on the image I’ve opened. For example, tools for editing RAW images are not shown if a JPEG photo is open. 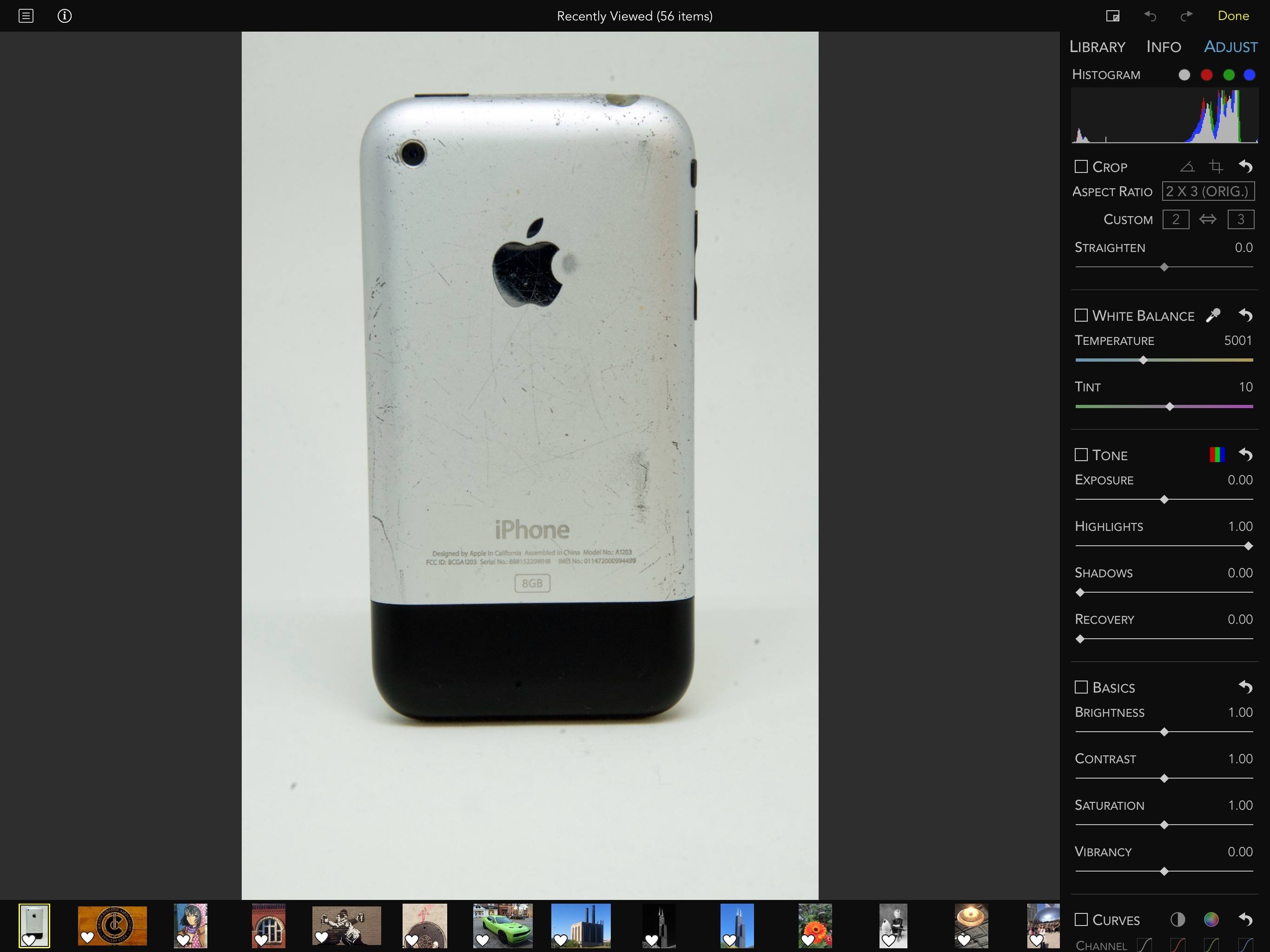 RAW Power includes the same tools for editing images as its macOS counterpart. At the top of the inspector is a histogram with circular indicators that indicate whether any color channels are clipped. For RAW format images, there are also controls to modify Boost, Black Boost, Black Point, Luma Noise, Color Noise, Detail, RAW Sharpen, and RAW Contrast. There is more detail on how the RAW image controls work in my review of the macOS version of the app. The bottom line though is that RAW Power provides access to tools to modify RAW images that aren’t available in most photo editing apps, including Apple’s Photos app. That gives users greater flexibility to fine-tune their photos.

RAW Power can also edit other file formats like JPEG and PNG and features a long list of editing tools that aren’t specific to the RAW format. Cropping, straightening, white balance, tone, brightness, contrast, saturation, sharpening, and many other variables can be tweaked. There is also a Curves tool for editing color channels visually and a Depth Effect tool that works with Portrait mode photos taken while using iOS 11.

RAW Power is a Universal app, but I don’t recommend using it on the iPhone or in Split View, except for quick edits. RAW Power’s inspector and its broad array of controls require as much screen space as possible. There’s just too much crammed into too little space for the app to be regularly used on an iPhone or in Split View. Even when the app is in full screen on an iPad, the touch targets of some controls are smaller than I’d like.

Also, on an iPhone and in Split View on an iPad the sections of the inspector become a tab bar along the bottom of the screen. It’s a somewhat jarring difference from the full-screen iPad experience and makes me wonder whether Gentlemen Coders would have been better served by reimagining the Mac app’s UI to accommodate a more consistent mobile experience across size classes, with fewer custom controls and bigger touch targets. The iOS app will benefit from being familiar to macOS users, but the familiarity comes with usability costs.

Despite the tight quarters in the inspector and incomplete implementation of drag and drop, RAW Power is a solid tool if you want more control over your photographs. The iOS version is an especially welcome addition for anyone who already uses RAW Power on macOS. Now, those users can modify photos in the field on an iPad or iPhone and finish up later on a Mac as needed, adding flexibility.

RAW Power is free to download from the App Store, but the Curves, White Balance, and Depth Effect tools are only available as part of an In-App Purchase.