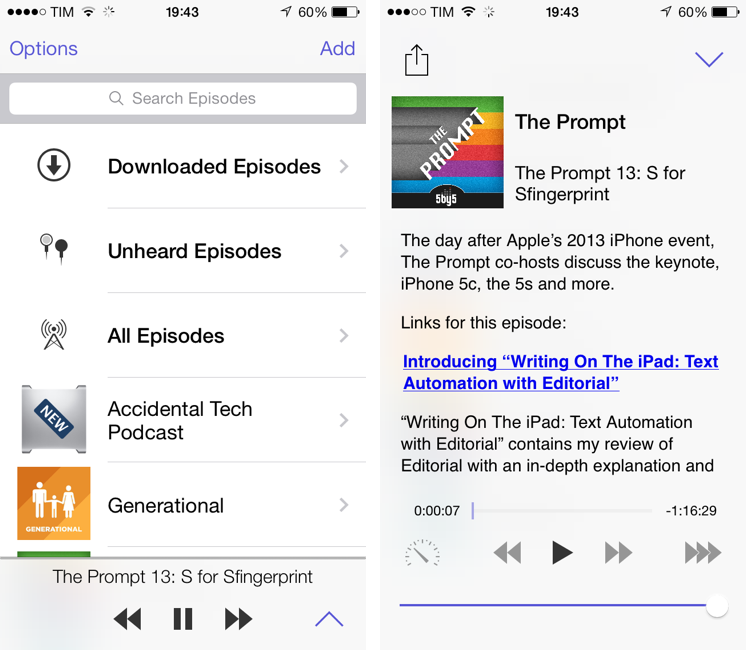 “I knew from the start that I would never win in a feature arms-race against apps that have been around for so long and developed so highly”, says David Smith, independent developer and creator of Feed Wrangler, a popular RSS service launched after the shutdown of Google Reader earlier this year. His new app and service, Pod Wrangler, launches today with an iOS 7 app for iPhone and a web backend to handle sync across devices and platforms with an API. Based on Feed Wrangler’s engine, Pod Wrangler is a podcast syncing and listening service that is completely free for existing Feed Wrangler customers.

Pod Wrangler is, in its first version, an iPhone-only app that uses the same API that Smith is launching and opening to third-party developers today. An iPad version is being considered, but its development will depend on the amount of requests and feedback from initial iPhone users. Following Smith’s tradition, Pod Wrangler is extremely simple and focused – in some areas of the app, perhaps a little “un-designed” and too simplified.

Pod Wrangler lets you subscribe to podcasts, download them, stream them, and add new ones from a built-in directory. The main screen comes with three default sections for Downloaded Episodes, Unheard Episodes, and All Episodes, and lists individual podcasts (alongside with their artwork) below them. There is no playlist management in Pod Wrangler, no filters, no smart folders to organize podcasts and episodes by advanced criteria. The app’s sole focus is on letting you add podcasts and listen to new episodes, automatically deleting those that have been listened to and alerting you of new ones through push notifications.

In terms of user interface design, Pod Wrangler is decidedly made for iOS 7. Whitespace and sans-serif type dominate the app: the only custom branding that Smith put into Pod Wrangler is the service’s purple tint color, which complements the podcast artwork images that are used in the title bar in lieu of a podcast’s name. Otherwise, Pod Wrangler is built upon the basics of iOS 7: in the app, you’ll find a native share sheet, conspicuous use of animations and gestures, and lots of white color. I would have personally liked a more unique approach, but I can see why Smith is going after an instantly-recognizable look for iOS 7.

Once logged in with your Feed Wrangler credentials, you have two choices to add new podcasts to an empty account: you can either import an OPML file with your subscriptions from other apps, or tap the Add button to bring up the Find Shows section. In here, you’ll find Popular Shows, Categories, Providers (5by5, NPR, TWiT, etc), Recommended, and buttons to add a feed manually. The last option is particularly interesting as it lets you add single MP3 files from a URL (useful for one-off episodes you want to listen to without subscribing to a full show) or podcasts from a feed URL that isn’t available in the directory (like Shawn Today). When adding a feed or episode from URL, Pod Wrangler will automatically fill-in the text field with the contents of your clipboard (because it assumes you’ve copied a URL you want to add), but the Add button confirms my aforementioned impression of un-design that I don’t like in the app. 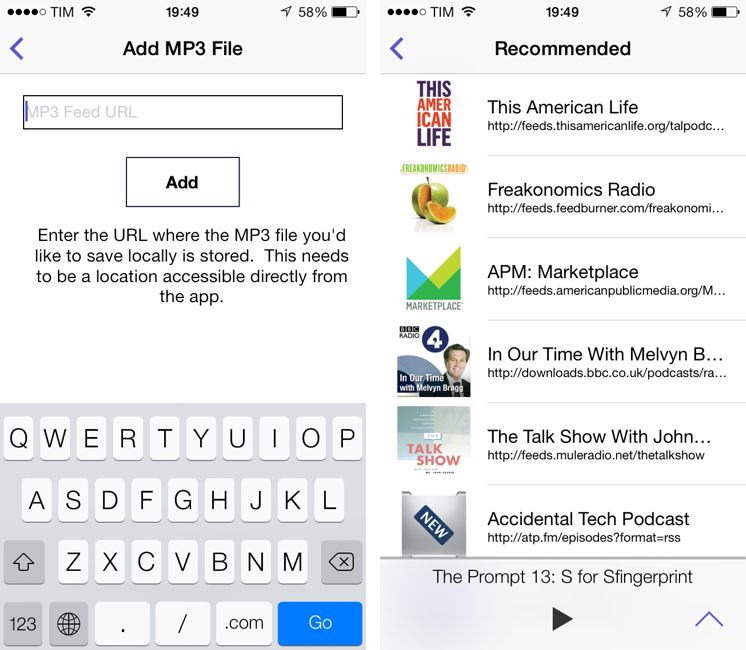 The directory is okay, with Providers that have mostly up-to-date podcasts and a good set of recommendations by Smith. The search feature of the app is, in my opinion, much more interesting: you can search for episodes and podcasts that contain specific keywords. It seems safe to assume that this search feature is based on Feed Wrangler’s search capabilities, and it works just as well in Pod Wrangler. Results come in fast enough, and, when searching for an episode from the main screen, you can tap & hold a result to bring up its description before playing it.[1] In the description, you can tap links in show notes to open them in the built-in browser, or tap & hold them to view a share sheet with options to share a link via AirDrop, Open in Chrome, Drafts, and other Apple apps.

In a podcast’s main list of episodes, besides tapping one to start playing it, you can hit the Wrangle button to enter a batch edit mode that lets you mark multiple episodes as heard at once, unsubscribe from a podcast, and download episodes locally. There is also a Mark All Heard button in the title bar to get an entire list marked as heard. For episodes that you already started listening to, Pod Wrangler will display time left in the list; when you tap a previously-started episode again, your old position will be restored.

The Pod Wrangler player sits at the bottom of the app, and it displays a purple progress bar, buttons to play/pause/skip, and an arrow button to enlarge the player and make it full-screen. From the larger player view, you can share an episode’s link, change playback speed, and view show notes. I would like to see a taller scrollable area for show notes and description, but I’m nitpicking. 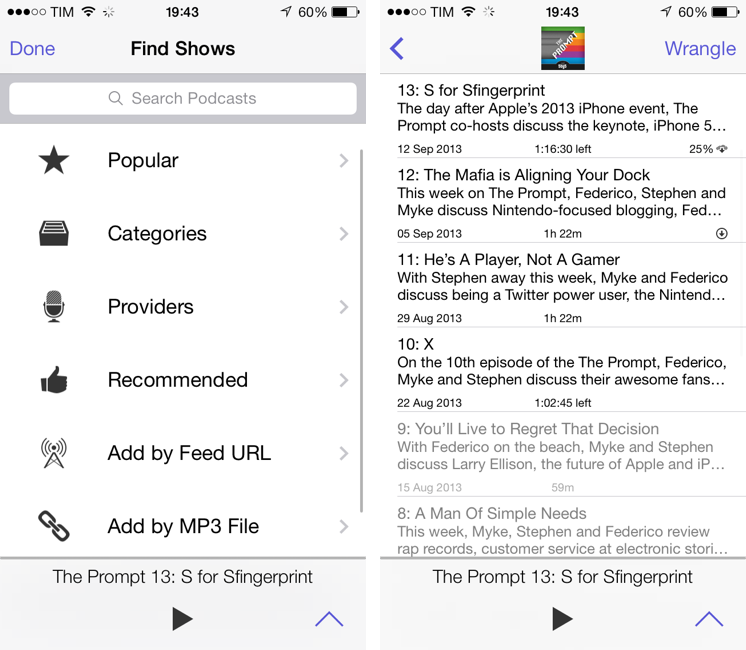 The big feature that warrants Pod Wrangler’s iOS 7-only nature is background refresh with push notifications and automatic downloads. In the pre-iOS 7 days, it used to be that podcast apps could send you push notifications for new episodes, which would allow you to open an app, start a download and a) either wait for the download to finish with the app in the foregound or b) close the app, but reopen it within 10 minutes to make sure iOS’ background wouldn’t time out. Those days are gone.

Pod Wrangler can alert of you of new episodes for your favorite podcasts with a push notification, start downloads automatically, and finish them in the background without needing to ever launch the app. In practice, if you’ve left your iPhone in your pocket all day without looking at Pod Wrangler, if new episodes of your podcasts were released, you’ll find them already downloaded in the app and waiting for you when you open Pod Wrangler, perhaps before dinner after a long day at work. There are some settings to allow or disable downloads on a cellular networks, and you can tell Pod Wrangler to delete episodes that have been downloaded, but otherwise the default iOS 7-ready preferences of Pod Wrangler will make for a much more natural, less I-have-to-remember-to-manually-start-downloads kind of podcast-listening experience. As with all other background-related features of iOS 7, it’s great, it’s easy, and, in my tests, it didn’t take a hit on battery life.

My issue with Pod Wrangler is that, from my podcast client of choice, I want more features. I want individual settings for subscriptions, sync across the iPhone and iPad, granular control over notifications and playlists, and the possibility to set up smart folders for episodes that match particular criteria.[2] Pod Wrangler isn’t a podcast app for power users, and I find that a curious decision considering that Feed Wrangler’s core audience seems to be primarily made of users who like to set up their own streams, support an independent developer, and, generally, tinker with the best apps to access a paid service.

On the other hand, I think that making Pod Wrangler free for existing Feed Wrangler users is a clever choice that should at least get people to try the app. If, among those people, there are folks who, unlike me, prefer a simple, super-straightforward podcast client, then it’s a win-win for both Smith and his customers. Pod Wrangler works well, its refresh times and notifications were almost instantaneous in the beta period, and of course the app gets all the iOS 7 features such as integration with Control Center and AirDrop.

The pricing of Pod Wrangler for new customers is also smart: on the App Store, the app will be free, but limited to five podcast subscriptions with no push notifications. A $1.99 In-App Purchase will let you unlock the full feature set directly from the app (and remove ads).

It’ll be interesting to see if the API will accelerate the development of third-party Pod Wrangler apps. In my experience, the podcast apps I’ve tried over the years always rolled their own sync solution or relied (with poor results) on Apple’s iCloud, and I have no idea if developers will be willing to adopt an API for podcast syncing and downloads that they don’t have to manage. With iOS 7’s background features and the Pod Wrangler API, there is a lower barrier of entry for developers interested in building clients. Can you imagine if Vemedio decided to support Pod Wrangler in Instacast?

Today, my taste isn’t aligned with the Pod Wrangler app, but I have only good things to say about the backend. With the right apps, Pod Wrangler could become considerably more popular among a larger userbase, and that would build a powerful ecosystem that spans Feed Wrangler, Pod Wrangler, and third-party apps.

“My only hope was to go after simplicity and straightforwardness”, Smith told me. From that standpoint, I think that Pod Wrangler accomplishes its goal.

Pod Wrangler is available on the App Store.