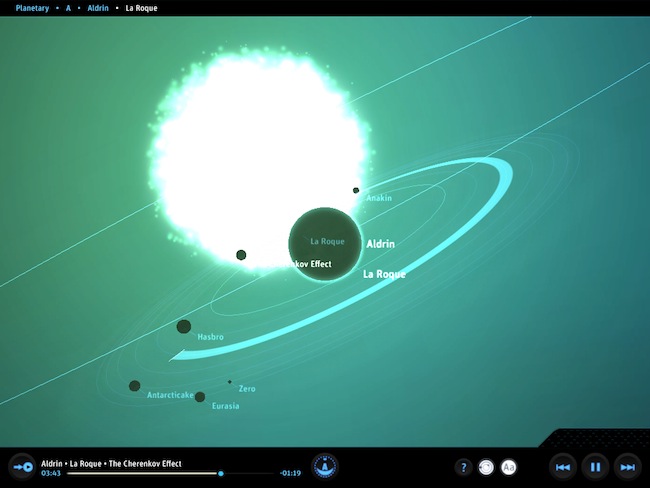 In what might be the coolest music experiment that has landed on the iPad to date, company Bloom Studio released earlier today Planetary, a new way to explore your iPad’s music library. Bloom Studio promises to deliver “playful, explorable, visually compelling views on personally relevant information from services like Facebook, Twitter, Instagram, and iTunes”, and Planetary is the realization of this mission statement: not only it’s based on the crazy concept of turning your iPad music library into a galaxy, it also works exceptionally well. Since I got my eyes on the teaser website a few days ago, I was looking forward to trying the actual product and see whether it could really bring a different way of exploring music to the tablet: now that I’m using the app, available for free, I have to say Planetary is one of those apps you have to try for yourself, rather than watching in some YouTube demo videos.

So here’s the gist: your music is a galaxy, artists are stars, albums are planets. In the 3D view of Planetary, no two planets are the same as the graphics are generated automatically off an album cover from the iPod app. Similarly, songs are moons: the more you listen to a song, the bigger the moon grows. And there’s more: each moon orbits at a speed related to the song’s length. Indeed, crazy stuff that doesn’t really make any sense until you try it. But on the other hand, it’s clear Bloom Studio set out to create an interesting experiment based on data visualization that merges files synced to your iPad, music, and space. I’m sure Buzz Aldrin would be proud.

While Planetary features some standard music controls like play / pause and back / forward, the key area of the app is support for multitouch gestures: you can pinch the galaxy to zoom on a star, pan and rotate a planet to check out all moons and orbits – overall, do all sorts of zooming and viewing to enjoy the pleasure of having your music available in the form of a galaxy. Like I said above, you just have to try it and see how it works with your music.

At the price of free, Planetary needs to be downloaded now and experienced with a rich iPod library synced to your iPad. Personal recommendation: for greater results, try to sync some Explosions In The Sky.