Pixelmator Photo for the iPad has been released with a trio of new features that greatly increase the power of the app. With the update, you can now now edit images in your iCloud Photo Library non-destructively without creating duplicates. There are also new batch-processing workflows and better options for exporting images. It’s an interesting mix of updates that I expect will appeal to a wide audience even though there remain iPadOS features I’d like to see adopted in the future.

When Pixelmator Photo launched, it was one of the first and best implementations of Files’ Document Browser in a photo editor. It’s a fantastic feature that I called out in my review because I love being able to edit photos stored in Keep It, Working Copy, Western Digital’s My Cloud app connected to my My Passport Wireless SSD, and other file providers. However, the trouble was and remains that iCloud Photo Library is not a file provider, which meant that to edit photos in the original version of Pixelmator Photo, images had to be imported first, creating duplicates. 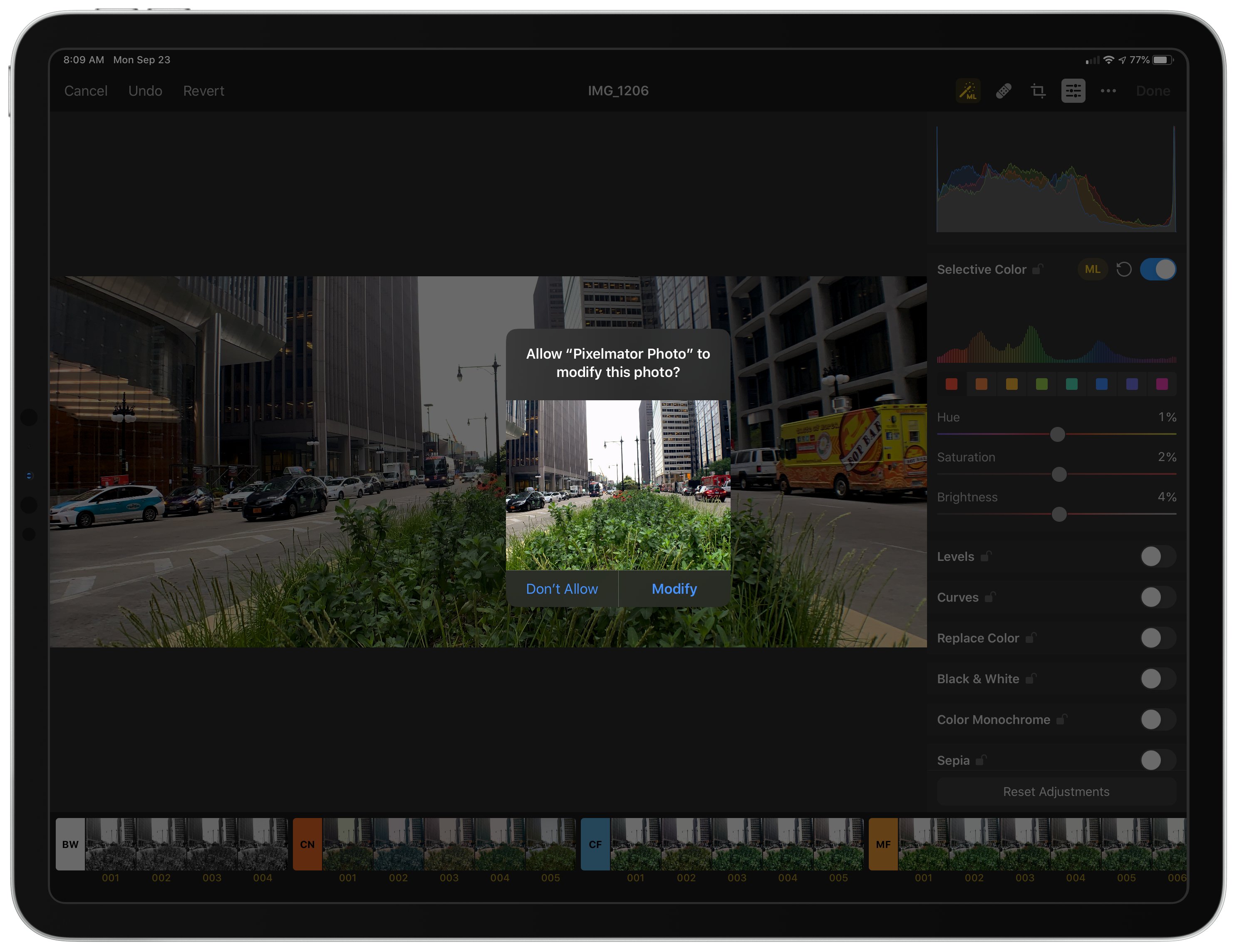 Edits to your iCloud Photo Library are non-destructive and saved without creating duplicates.

As with past versions, edits made to images in the Photos and Files views are non-destructive. Adjustments you make are saved as a separate file alongside the images themselves, so you can make more changes later or revert to the original version. However, if you’d prefer, you can turn on destructive editing from Pixelmator Photo’s entry in the Settings app, which eliminates the associated file of edits and saves some storage space.

The second big change to Pixelmator Photo is a robust batch processing system. Tap the Select button in the top-right corner of the image picker view to choose multiple images to edit together. After selecting the photos you want to edit, tap the ‘Batch’ button that appears, which opens a tiled interface reminiscent of the Home app’s UI.

My favorite part of the built-in workflows is that they can be edited, which gives users a head start on creating their own workflows. There’s a Reset button that allows you to start over with the original workflow at any time if you don’t like the changes you’ve made. Alternatively, you can start entirely from scratch with a custom workflow, adding machine learning tweaks and filters, rotation and straightening, cropping to different aspect ratio presets, and exporting to a bunch of file types at differing qualities and scales.

When you apply a workflow to a group of images, Pixelmator Photo displays the status of each as they’re processed. If the Export toggle is turned off in your workflow, the edits are saved to Photos or Files. If the Export toggle is on though, Pixelmator Photo displays the share sheet at the end of the process so you can send the images to another app.

I expect to use Pixelmator Photo’s batch processing a lot for quickly touching up a group of photos and sending them to friends and family and doing things like resizing MacStories Weekly images to a specific pixel width to meet the size limits imposed by MailChimp. The new workflows are perfect for those sorts of broad edits that are applicable to several images. If you want to make more refined edits, Pixelmator Photo’s other editing tools are available to apply to individual images. 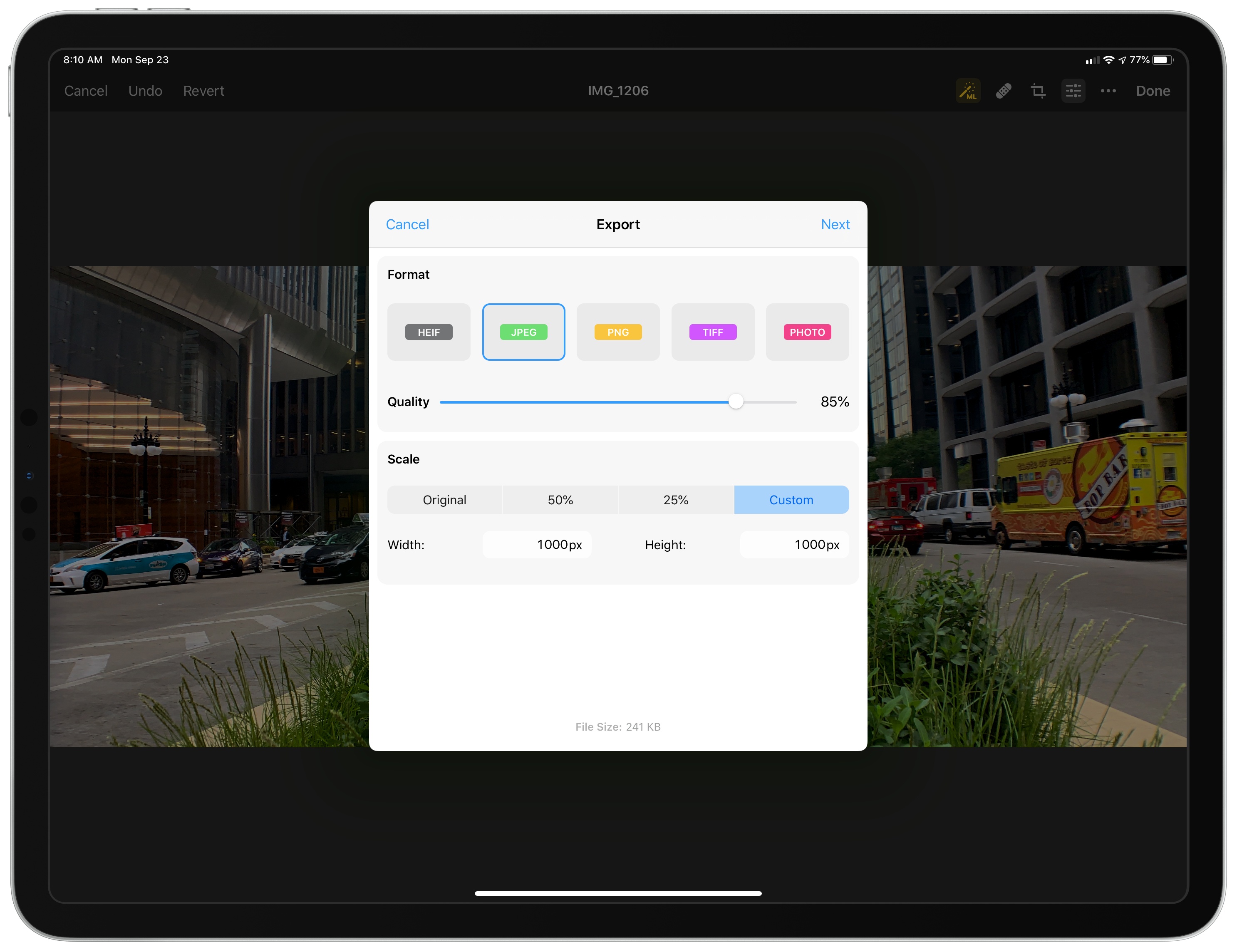 One thing I wish Pixelmator Photo’s batch processing had is Shortcuts integration. I’d love to see an ‘Add to Siri’ button alongside the workflow settings, so I could combine its workflows with those of other photo editors and utilities. I’d also like to see Split View and multiwindow support added. Pixelmator Photo is best used full-screen on the iPad, but the ability to use it next to other apps or compare two images side-by-side would be a big advantage.

The third feature of the Pixelmator Photo update is new export options. Before, you could only select file type and quality options when exporting an image. Now, you can also scale images to a couple of different presets or a custom pixel width and height. It’s a smaller change compared to the others, but nonetheless important if you ever need to scale an image for posting it on the web, for example.

Direct access to my iCloud Photo Library for editing without creating duplicates, batch processing, and more export options are all excellent additions to Pixelmator Photo. Together, they make this the most significant update to the app since its launch and the app an excellent choice as the primary photo editor for more users than ever before. I’d still like to see greater adoption of iPadOS features like multiple windows, Split View, and Shortcuts actions, but what the app lacks in these areas, it largely makes up for with a robust set of self-contained tools and workflows, which is why it remains one of my favorite photo editors that I keep close by on my Home screen.

Pixelmator Photo is available on the App Store for $4.99.