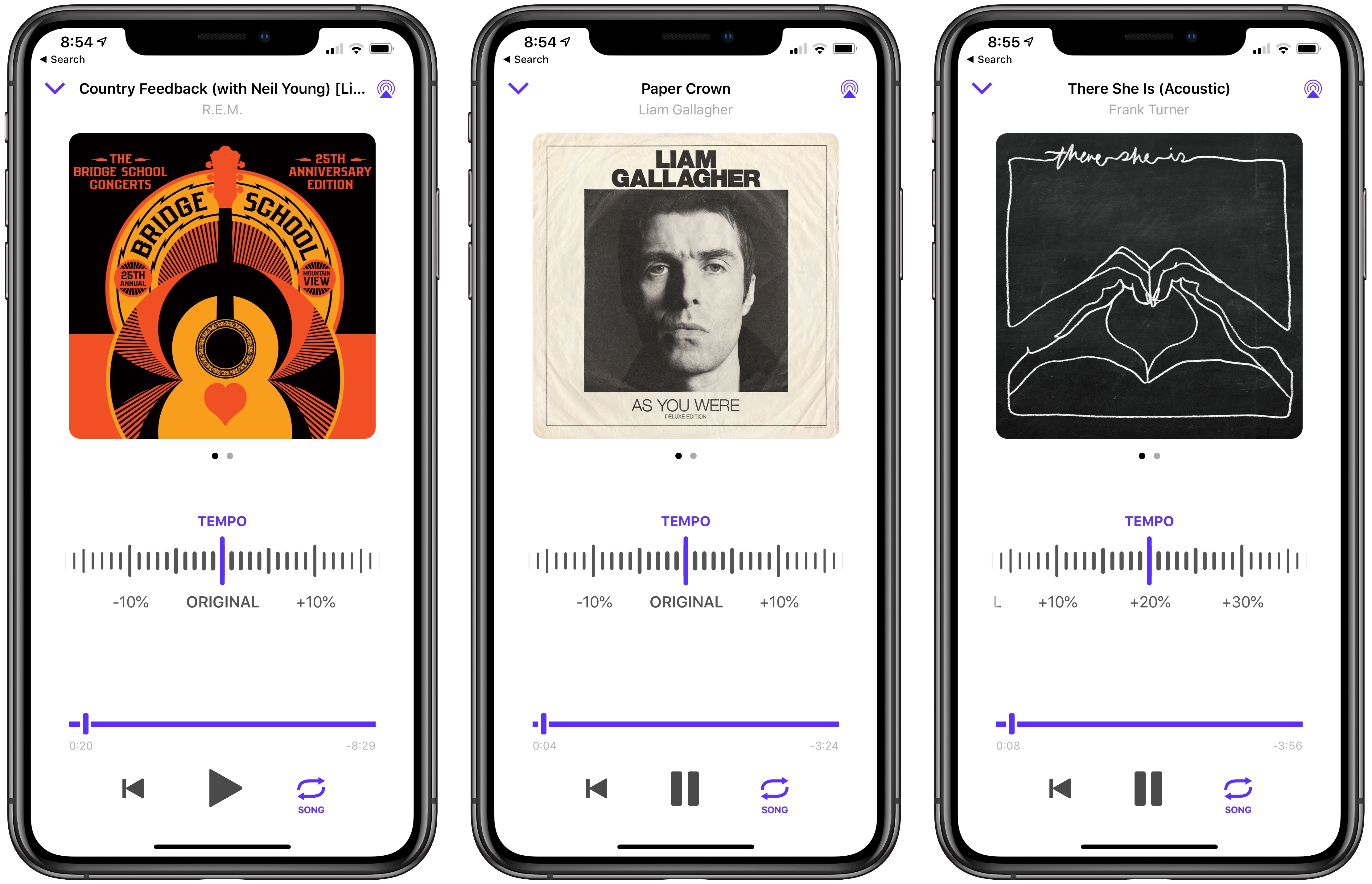 Nearly 11 years into the App Store, it isn’t often that an app surfaces that does something unexpected which no one else seems to be doing, but Perfect Tempo by developer Open Planet does precisely that. The app is a simple utility designed for musicians and dancers who want to slow down or speed up music without affecting its pitch and loop it as they learn a song. Other apps have similar functionality that I’ve covered before, but what makes Perfect Tempo unique is that it can slow down and speed up streamed Apple Music tracks, which other apps can’t do.

When iTunes moved away from DRM-protected tracks in 2009, a whole category of utilities became possible that allowed users to slow down and loop the music they purchased without changing the pitch of the track. Those apps enabled musicians to methodically practice and perfect parts of a song by playing along slowly until they could match a song played at normal speed. One of my favorite examples on iOS is Capo Touch.

Those apps became less useful as the music world moved to streaming. Tracks served by Spotify and Apple Music reintroduced DRM protection that didn’t work with existing music tempo apps. You could still buy songs you wanted to use with those apps in iTunes and download them locally, but for Apple Music subscribers, the need to purchase and download songs they already had access to in Apple Music added friction and cost to the learning process. 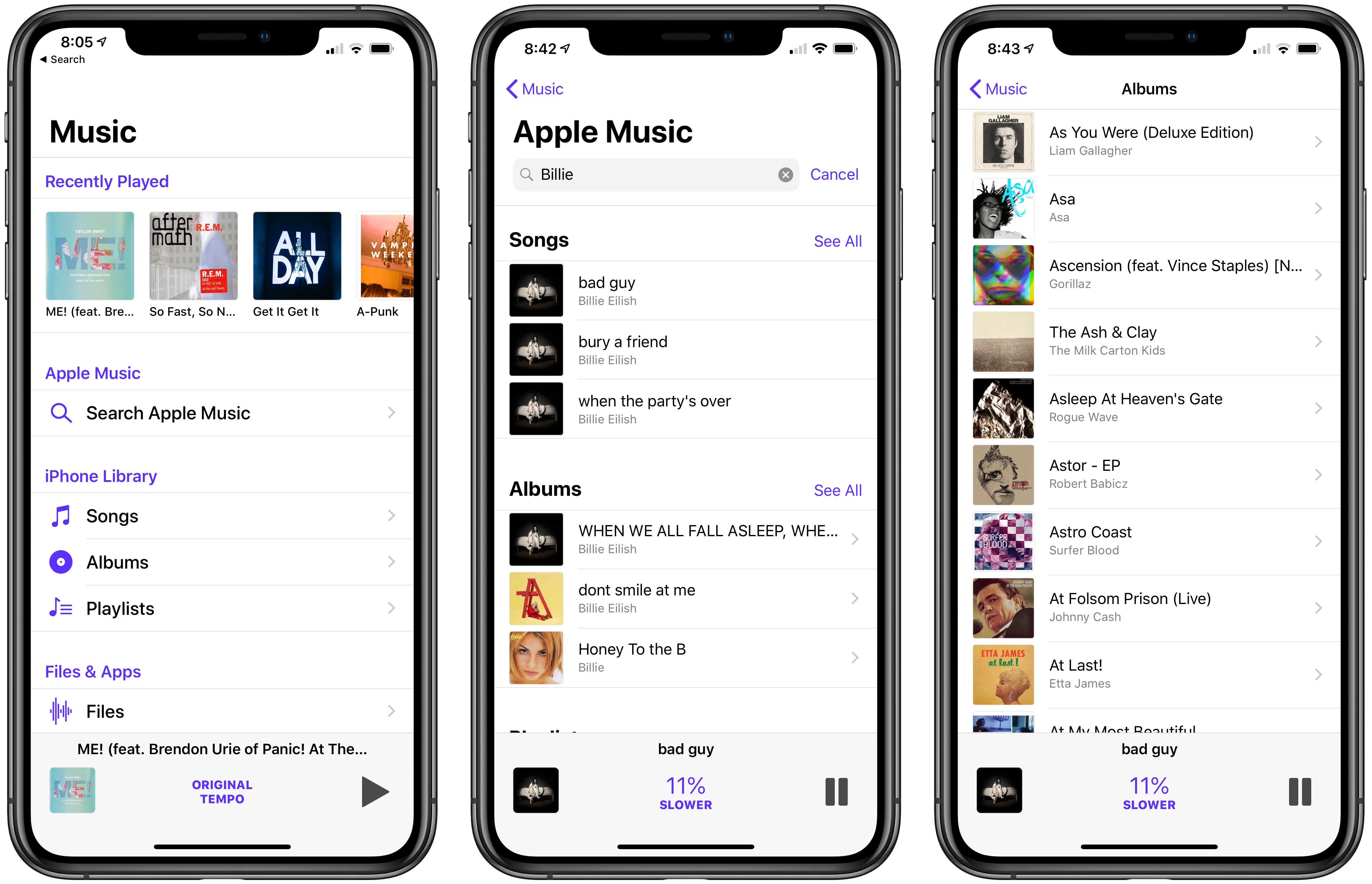 Perfect Tempo eliminates that pain point. The only real difference between Apple Music tracks and iTunes tracks is how you access them. Apple Music songs require you to search the service’s catalog, while songs in your iCloud Music Library can be navigated using separate lists of Songs, Albums, and Playlists.

Depending on the source of the song you pick to practice, Perfect Tempo uses a different audio engine to slow it down or speed it up, but the difference is invisible to users. The result is that the distinction between owned and streamed music is meaningless to Apple Music subscribers,1 allowing them to focus on practicing a song instead. 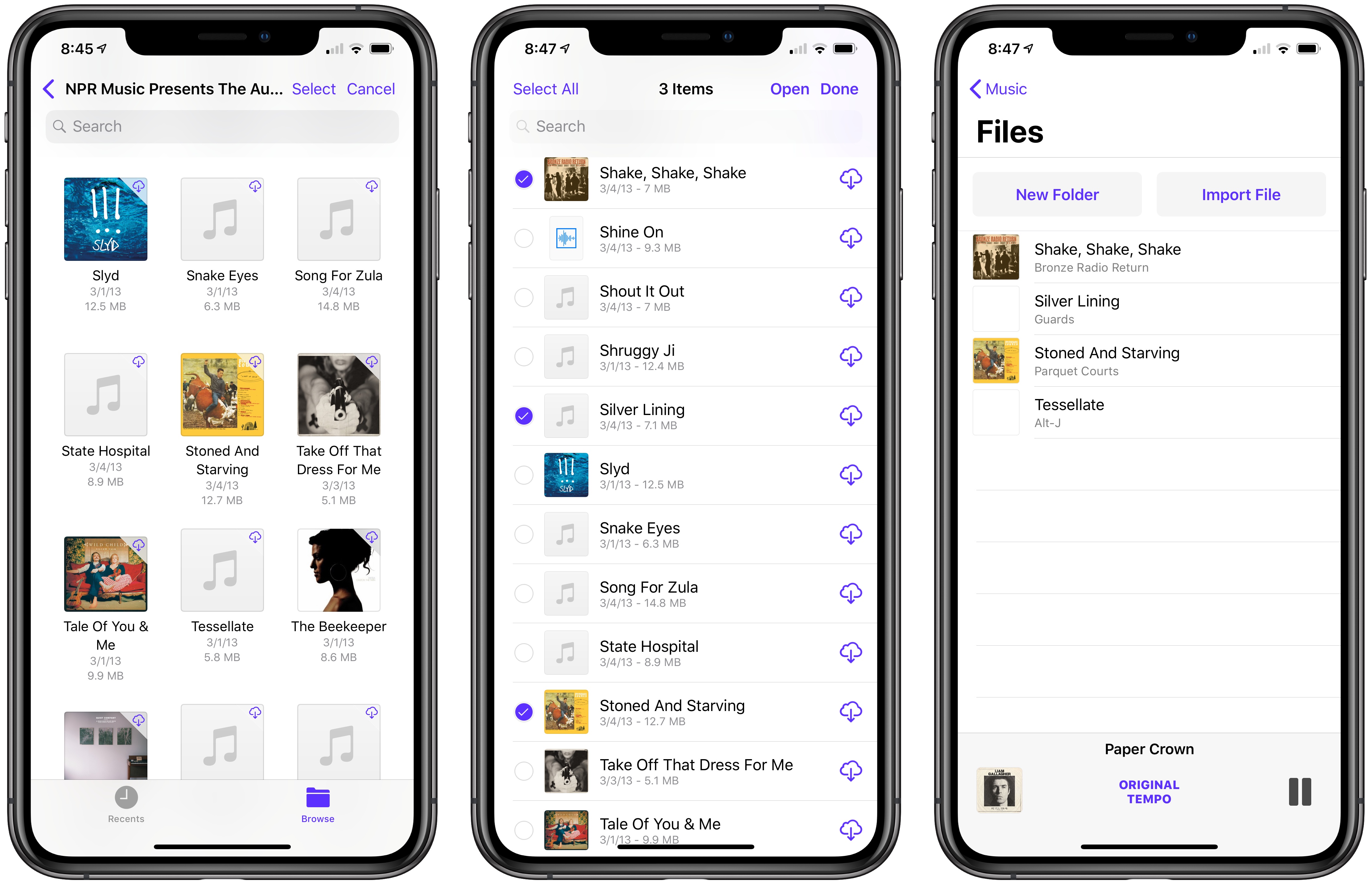 Songs can be added to Perfect Tempo with the iOS document browser too.

In addition to iTunes and Apple Music tracks, Perfect Tempo uses the iOS document picker to allow users to use audio tracks from any iOS file provider, like iCloud Drive, Dropbox, and Google Drive, and Open Planet’s audio recording app, Just Press Record. Recently-accessed tracks from any source are available across the top of the app’s screen as small thumbnails that can be scrolled horizontally. In an especially nice touch, Perfect Tempo remembers the tempo of recently played songs so you can pick up where you left off using the same pace. 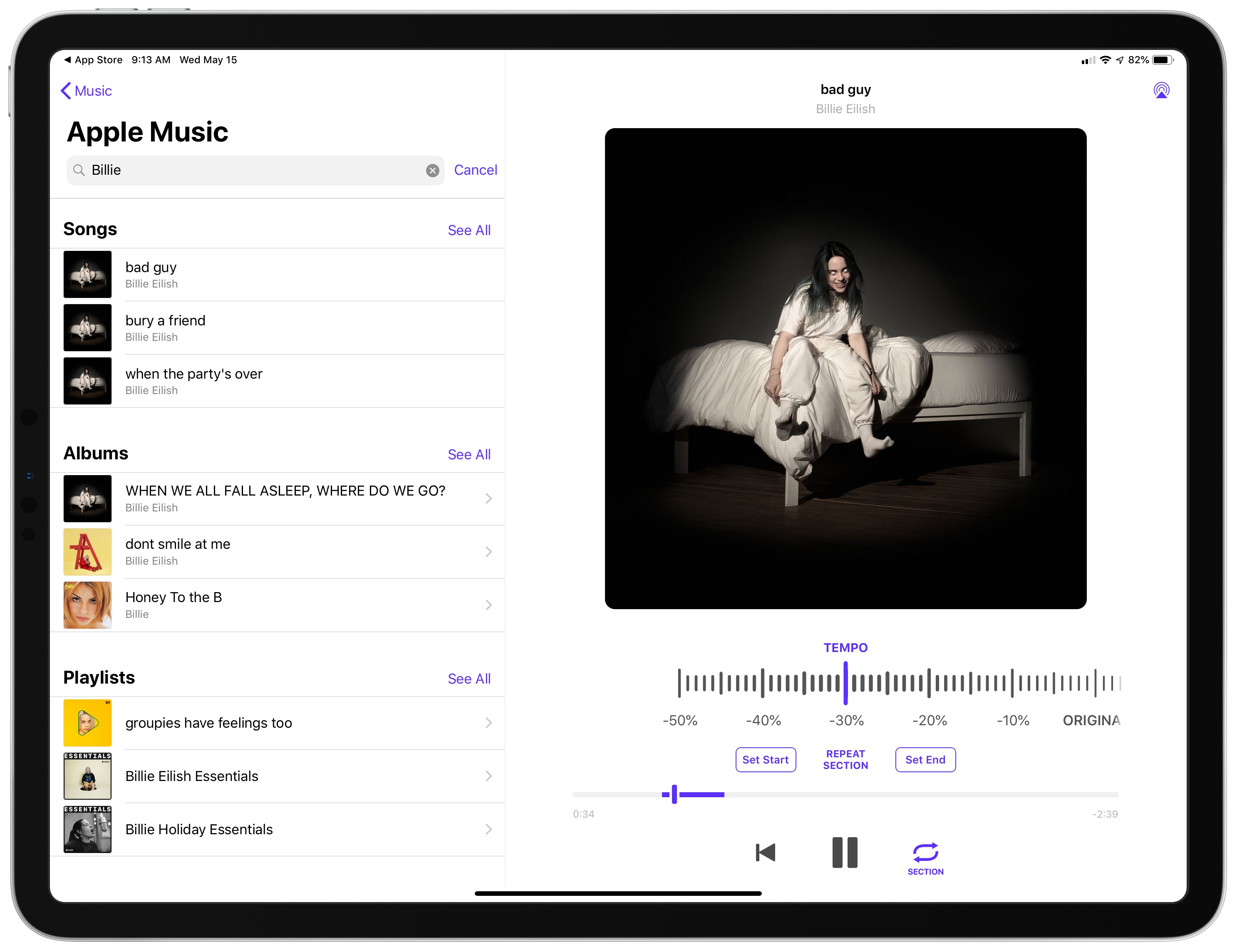 Perfect Tempo takes advantage of the iPad’s bigger screen for displaying music navigation and playback together.

The app’s player is reminiscent of the Music app. On an iPhone, as you look for a track to play, a mini-player is available along the bottom of the screen. When the mini-player is tapped, it expands to fill the screen, revealing a complete set of controls. On the iPad, the full player is always visible on the right with music navigation on the left. 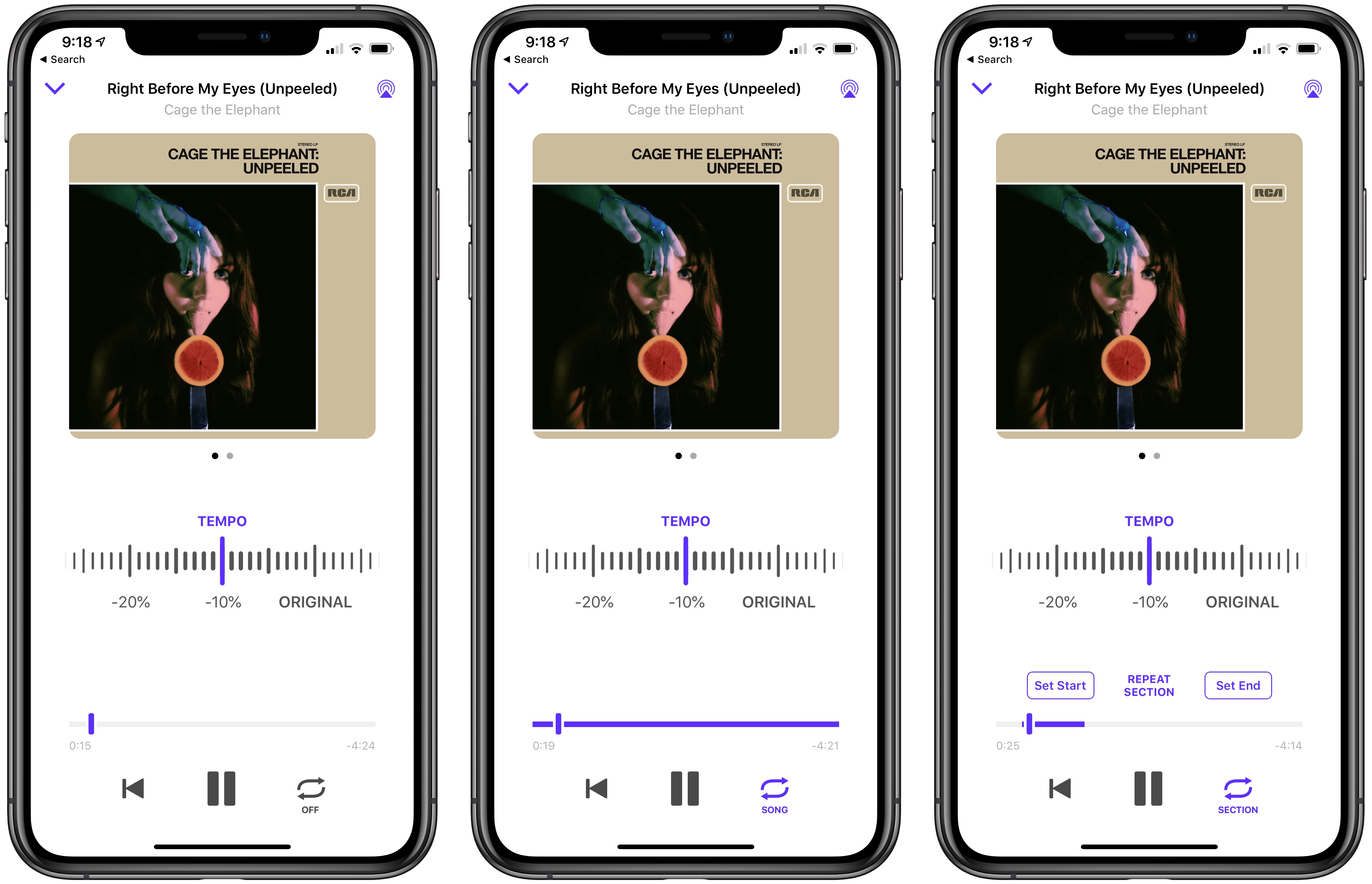 Songs can be played once, or the entire song or a section can be looped continuously.

From the full-screen player, you can increase or decrease the playback speed of a track in 1% increments up to 50% faster or slower. You can play a track once, loop it in its entirety, or select a section to loop over and over. To choose a part of a song to loop, drag the playhead to the start position and tap ‘Set Start’ then drag it to the end and tap ‘Set End.’ Without a waveform to view the music visually or real-time playback of the song as you move the playhead, correctly picking the start and end positions requires some trial and error, but in practice, I found setting up looping sections easier than I expected. Playback can also be sent to AirPlay speakers and TVs.

The one difference between owned and streamed music in Perfect Tempo is that the pitch of owned and downloaded music can be adjusted too. To access the feature, you need to turn on the Show Transposition Controls toggle in the app’s entry of Apple’s Settings app. Once enabled, swiping on a song’s artwork in the full-screen player allows its pitch to be shifted.

Perfect Tempo doesn’t have all the bells and whistles of an app like Capo Touch, which can help you pick out chords from a guitar solo, for example. However, the ability to change the tempo of any of the tens of millions of songs available in Apple Music is a substantial advantage over similar apps and makes Perfect Tempo an excellent new tool for musicians and dancers who are looking to learn new songs.

Perfect Tempo is available on the App Store for $4.99.