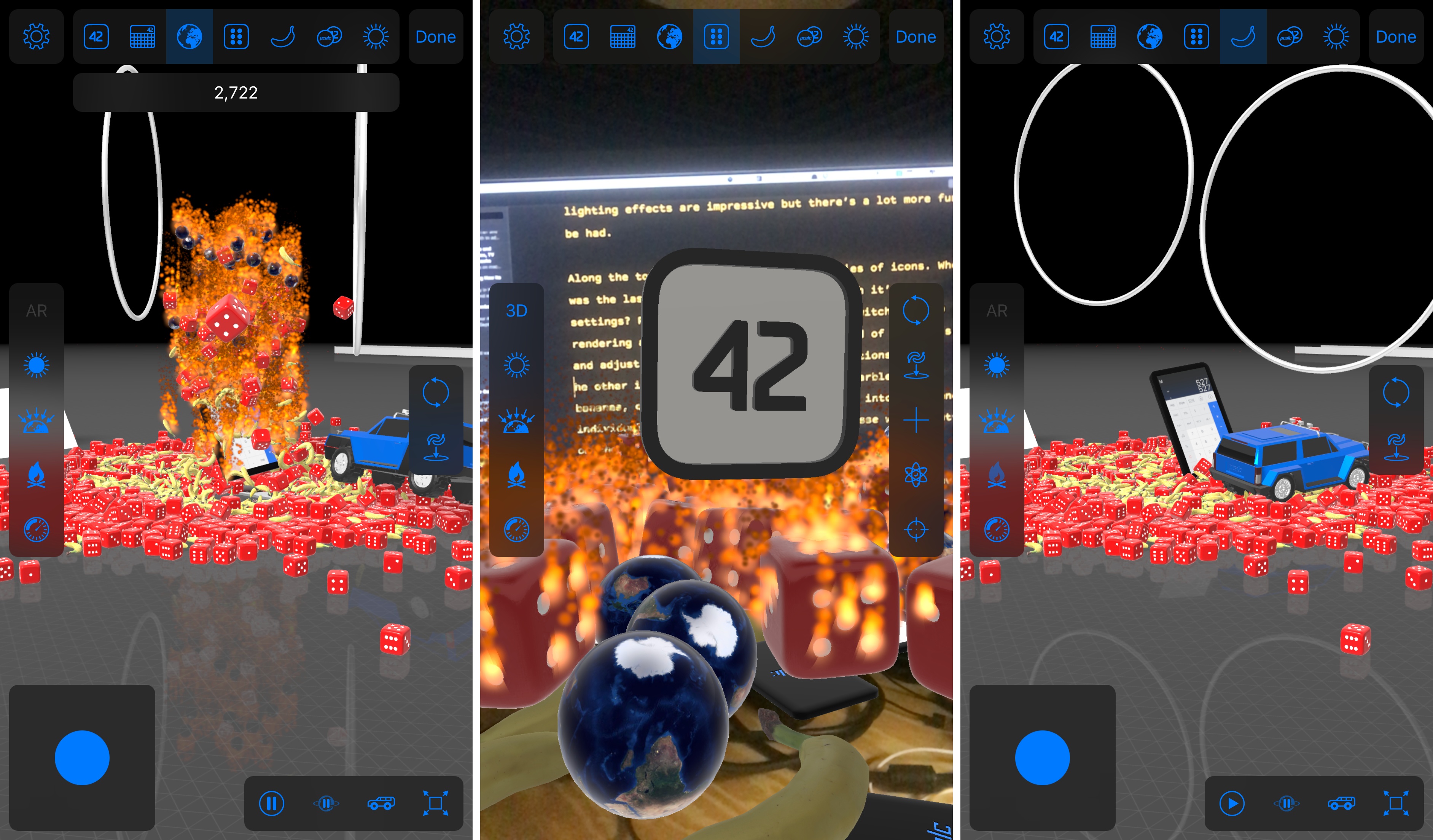 As apps updated for iOS 11 begin to trickle out onto the App Store, it’s fitting that the first of what will be many reviews on MacStories in the coming days features ARKit, which from all indications is a big hit with developers. Even more fitting though, is that the app reviewed is PCalc by James Thomson. PCalc is an excellent calculator app that was one of Federico’s ‘Must Have’ apps of 2016. It’s available on iOS devices, the Apple Watch, and even the Apple TV. Still, you wouldn’t expect it to incorporate 3D animation or augmented reality, but that is exactly what the latest version of PCalc has tucked away in its settings.

Thomson has used PCalc’s About screen to create a 3D and ARKit playground that shows off what is possible when you combine Apple’s Metal APIs and ARKit. To access the About screen tap the info button in PCalc’s main view to enter its settings, then tap the Help button. At the top of the Help screen, is an ‘About PCalc’ button. When tapped, your screen is taken over by a 3D rendering of PCalc’s ’42’ icon that you can spin around with your finger. The smooth animations, textures, and lighting effects are impressive, but there’s a lot more fun to be had.

Along the top of the About screen is a series of buttons. When was the last time you saw an About screen with its own settings? PCalc’s does, and with it, you can switch to a 3D rendering of a working PCalc calculator instead of the app’s icon and adjust several other interactions. The other icons toggle icons, calculators, marbles, dice, bananas, coins, and lights that you can toss into the scene individually by tapping the screen or dump onscreen en masse with a button on the right-hand side of the view.

The left side of the About screen controls lighting, gravity, flames, and whether statistics are turned on. It’s surprisingly fun to drop a load of burning bananas or dice into the scene and watch them smolder.1 After you’ve made a sufficient mess in 3D mode, toggle the orbit button in the lower right-hand corner of the screen to get a good view of your handiwork from every angle.

The same controls plus a cannon and physics toggle are available in an AR mode that lets you play in the same sandbox but set in your physical surroundings. When you’re finished, tidy up by tapping the reset button on the right-hand side of the screen and start over.

As fun as it is to toss objects around the About screen and set them on fire, PCalc has an even better trick up its sleeve. Tap the car button at the bottom of the screen to open a stunt course complete with a truck, ramps, and hoops along with a control pad in the lower left-hand corner of the screen for steering. It’s a delightful mini game hidden within the About screen that’s as easy to lose a half hour playing as many other games I’ve tried. 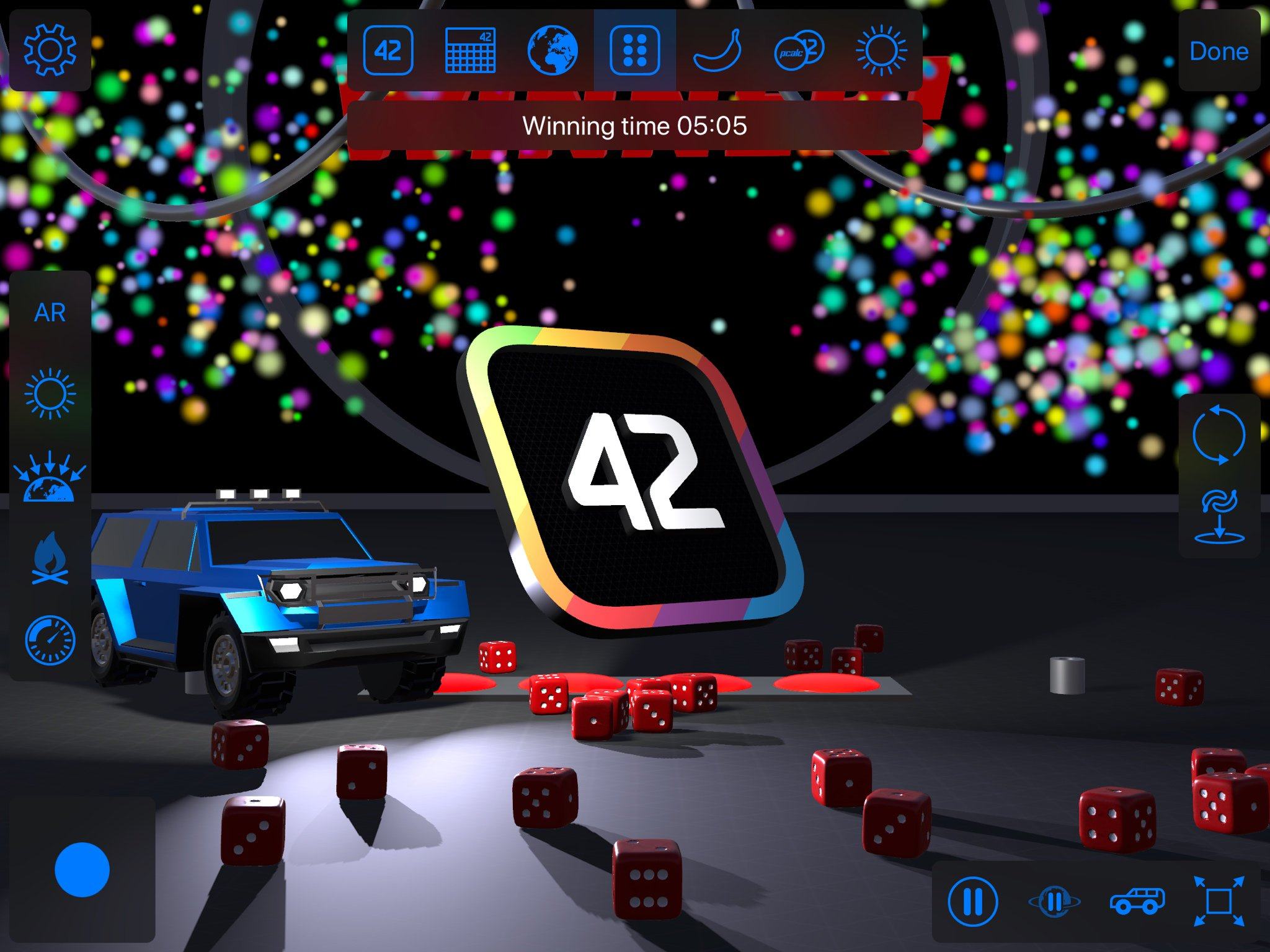 The 3D/AR About screen isn’t all that’s new in PCalc though. The app also supports drag and drop, which is handy when using PCalc alongside another app on an iPad. Simply drag the results of your calculation into any app that can receive it like Notes. I also like that Thomson supports dragging into PCalc. Drag an equation like 7 * 6 into the app, and it will calculate the answer. There are also new and updated custom icons including one created by artist David Lanham of a panda eating a bamboo number 42.2

James Thomson is known diving into new Apple technologies and platforms in unusual ways with PCalc. Nowhere is that more evident than in the app’s About screen. As soon as I opened the view, I felt like I’d entered Thomson’s private playground where the constraints imposed by developing a calculator app were suddenly removed giving him free reign to experiment. The addition of drag and drop support to PCalc is truly useful. The 3D and AR About screen sandbox is less so, but it doesn’t need to be because it’s just plain fun. I highly recommend checking out PCalc’s iOS 11 update. It’s both a peek at what’s to come from Apple’s 3D and AR technologies and an absorbing way to kill some time.

PCalc is available on the App Store. Note that 3D effects require iOS 10 and AR mode requires iOS 11, which will be released by Apple on September 19, 2017.