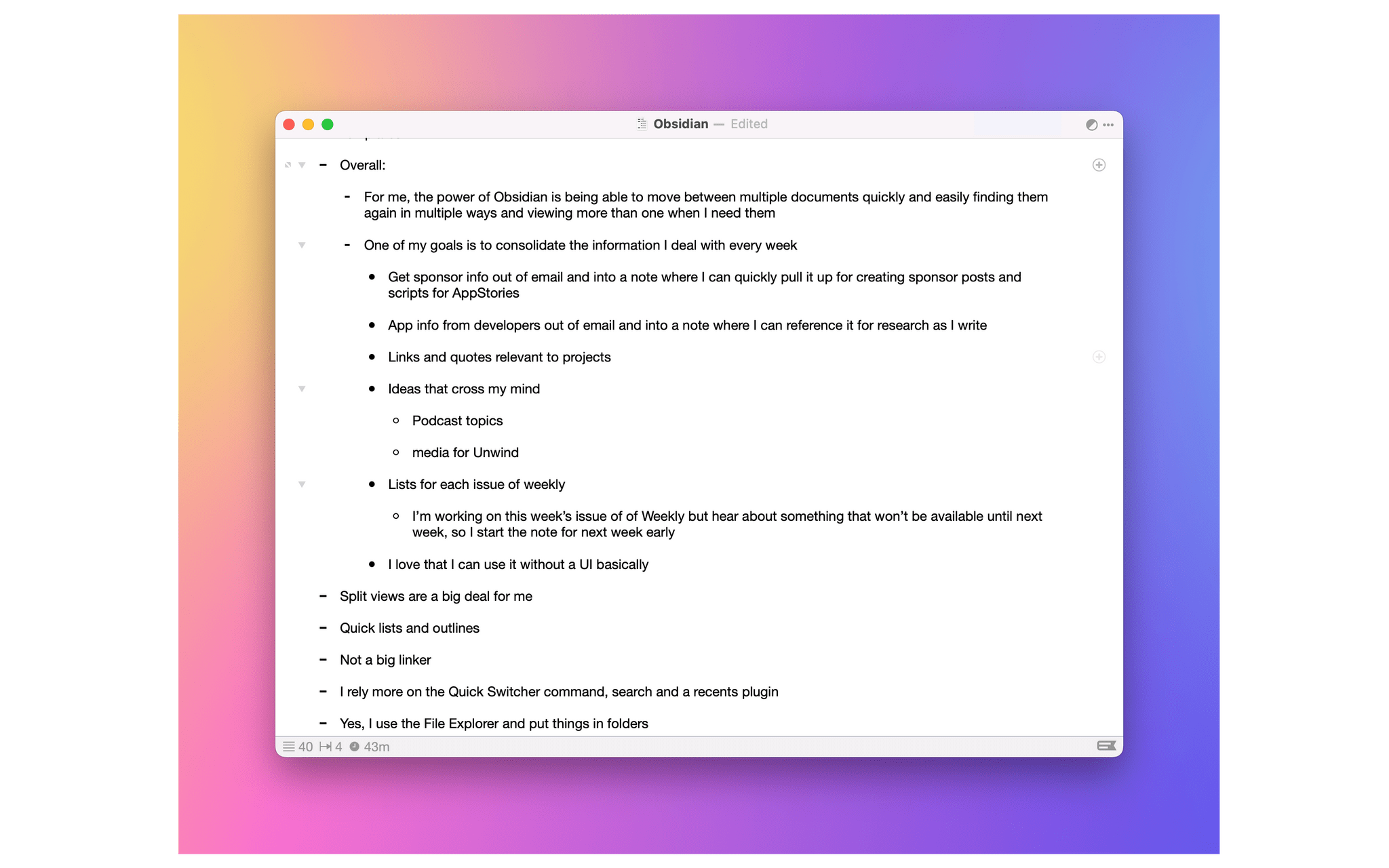 One of my earliest MacStories reviews was of OutlineEdit 1.0, a Mac-only outlining app that caught my eye with its attention to the kind of details that are a must for creating carefully structured outlines quickly. Version 3.0 recently landed on the Mac App Store and at its core, OutlineEdit is just as capable as ever at effortlessly turning ideas into outlines. The changes introduced with version 3.0 include refinements to existing features, as well as a handful of new features that extend OutlineEdit’s capabilities. Let’s take a look. 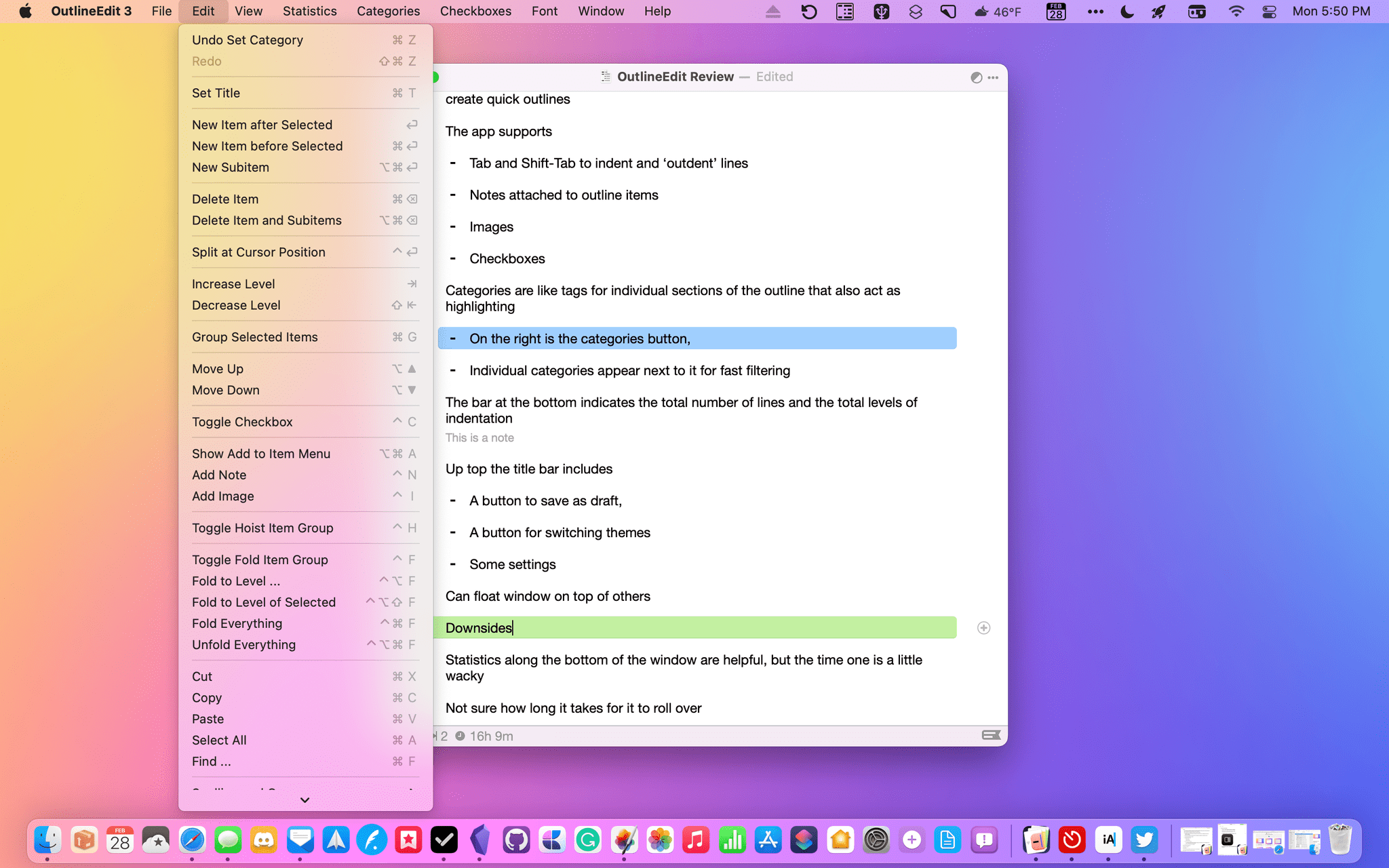 A sampling of OutlineEdit’s many keyboard shortcuts.

OutlineEdit’s strengths since version 1.0 lie in its spare UI and keyboard shortcuts. When I create an outline, I want my focus to be on the ideas I’m organizing, not on formatting the outline. OutlineEdit makes that easy with the kinds of outlining tools you expect like Tab to indent and Shift+Tab to outdent from wherever you happen to be on a line. Those are conventions followed by lots of outlining apps and text editors, but OutlineEdit goes further, focusing as much on the structure of your outline as on the text you’re typing.

For example, if you’re editing in the middle of a line and hit the return key, OutlineEdit creates a new empty bullet in your outline instead of splitting the line at the cursor with a return character like a text editor would. It takes a little getting used to, but the interaction also feels right in the context of an outline where the emphasis is on moving from idea to idea as you build each node of your outline. Of course, you can still split a line if you want with ⌃+return. 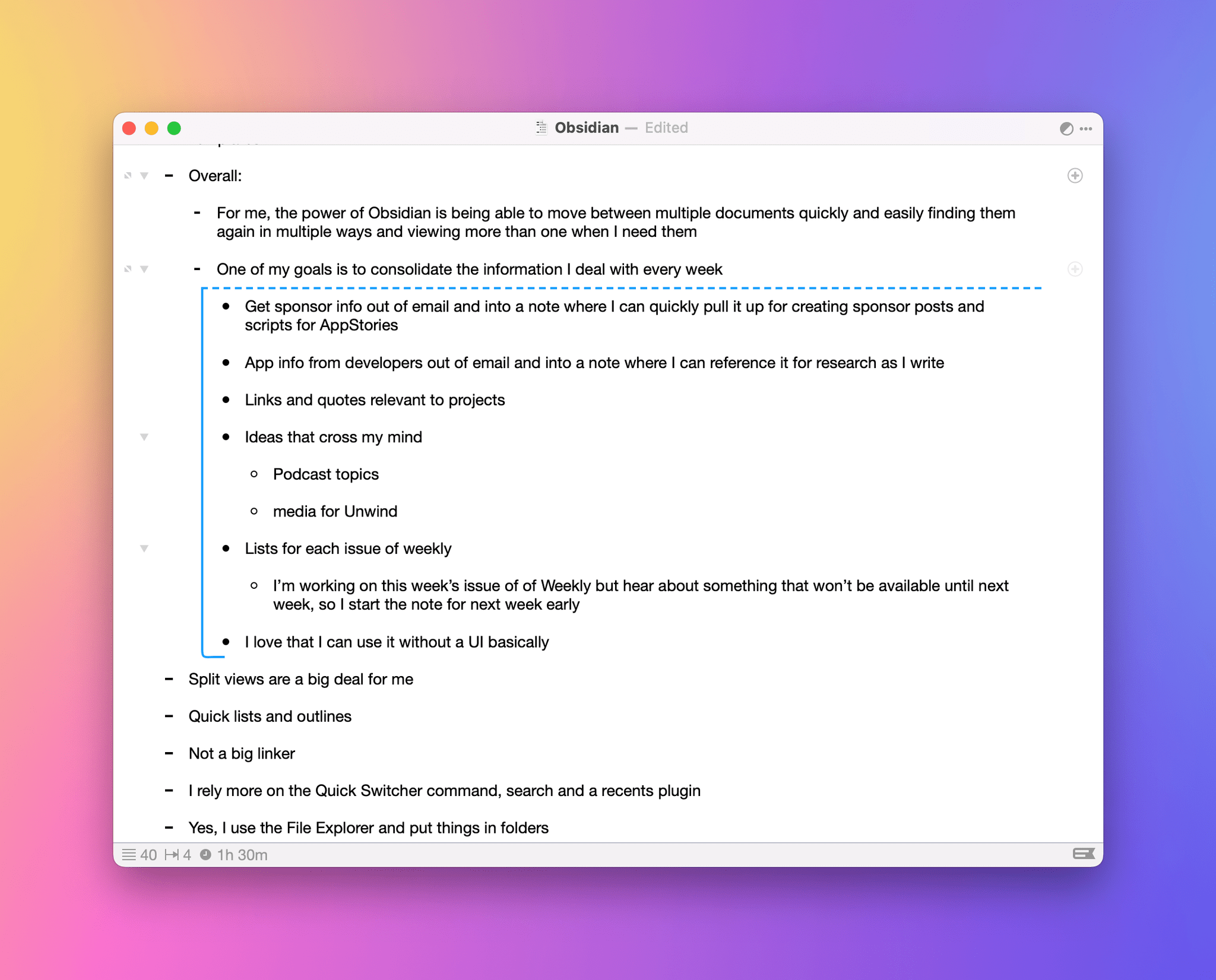 Hover the pointer over the disclosure triangle to get a visualization of related lines.

Every editing action is tied to a keyboard shortcut, making OutlineEdit fast to use once you’ve committed some of the shortcuts to memory. You can fold at any level of an outline, fold or expand all levels at once, hoist a level to focus on it, hiding the others, and group multiple selected lines under another line with a keystroke. Lines can also be moved up and down through your outline using the keyboard. One of my favorite touches is that hovering the pointer over a line’s disclosure triangle shows you the lines grouped under it by underlining the current item with a dashed line and bracketing the items beneath it. It’s an excellent visualization of the relationship among the branches of your outline. 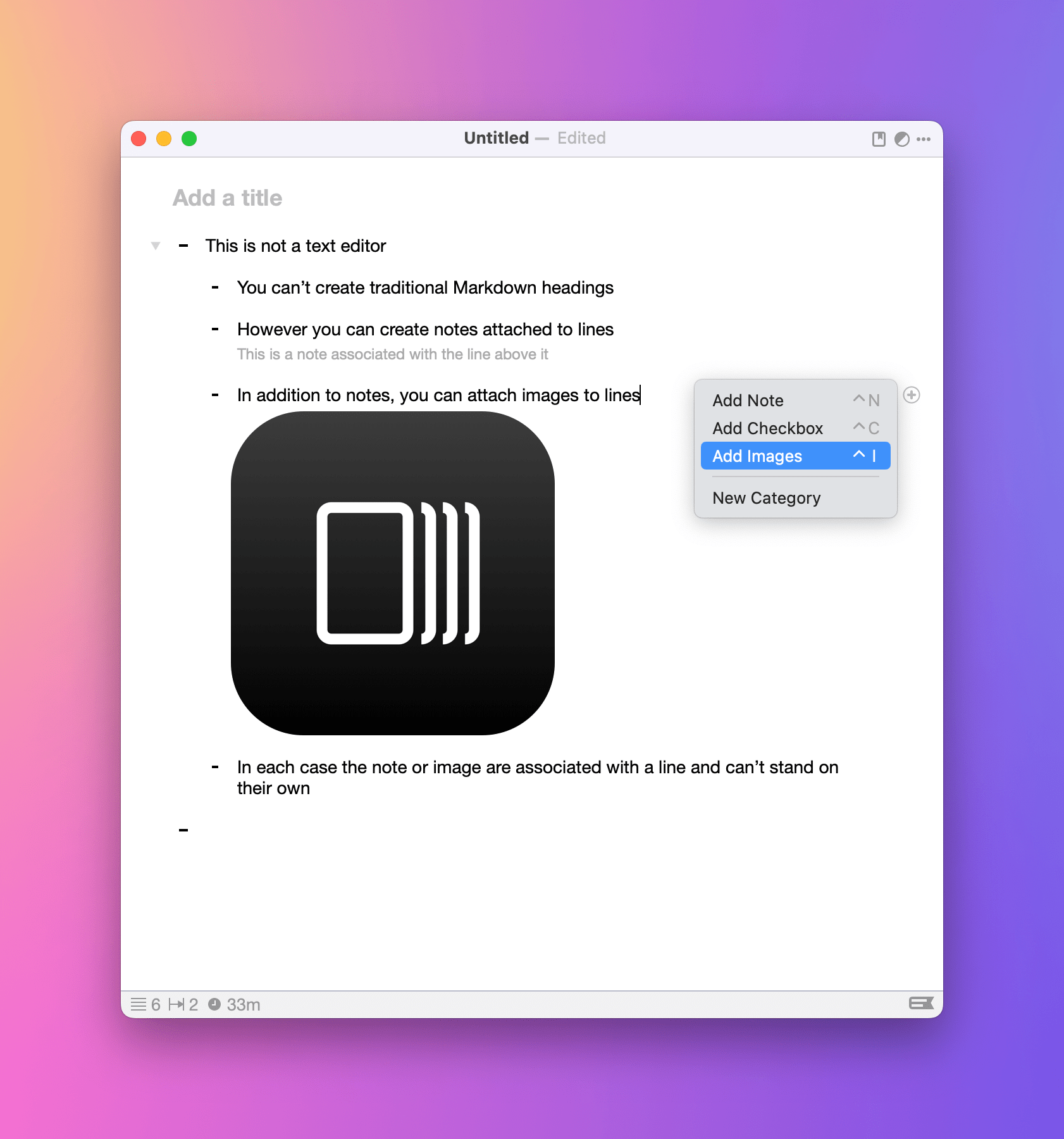 The plus button next to each line opens for adding images, notes, categories, and more.

In addition to the traditional bullets of an outline, OutlineEdit also lets you attach notes to a bullet, which appear beneath it in smaller gray text. Images can also be included in an outline, which is new to version 3.0, as can checkboxes, which, when toggled on, appear next to every line of the outline. 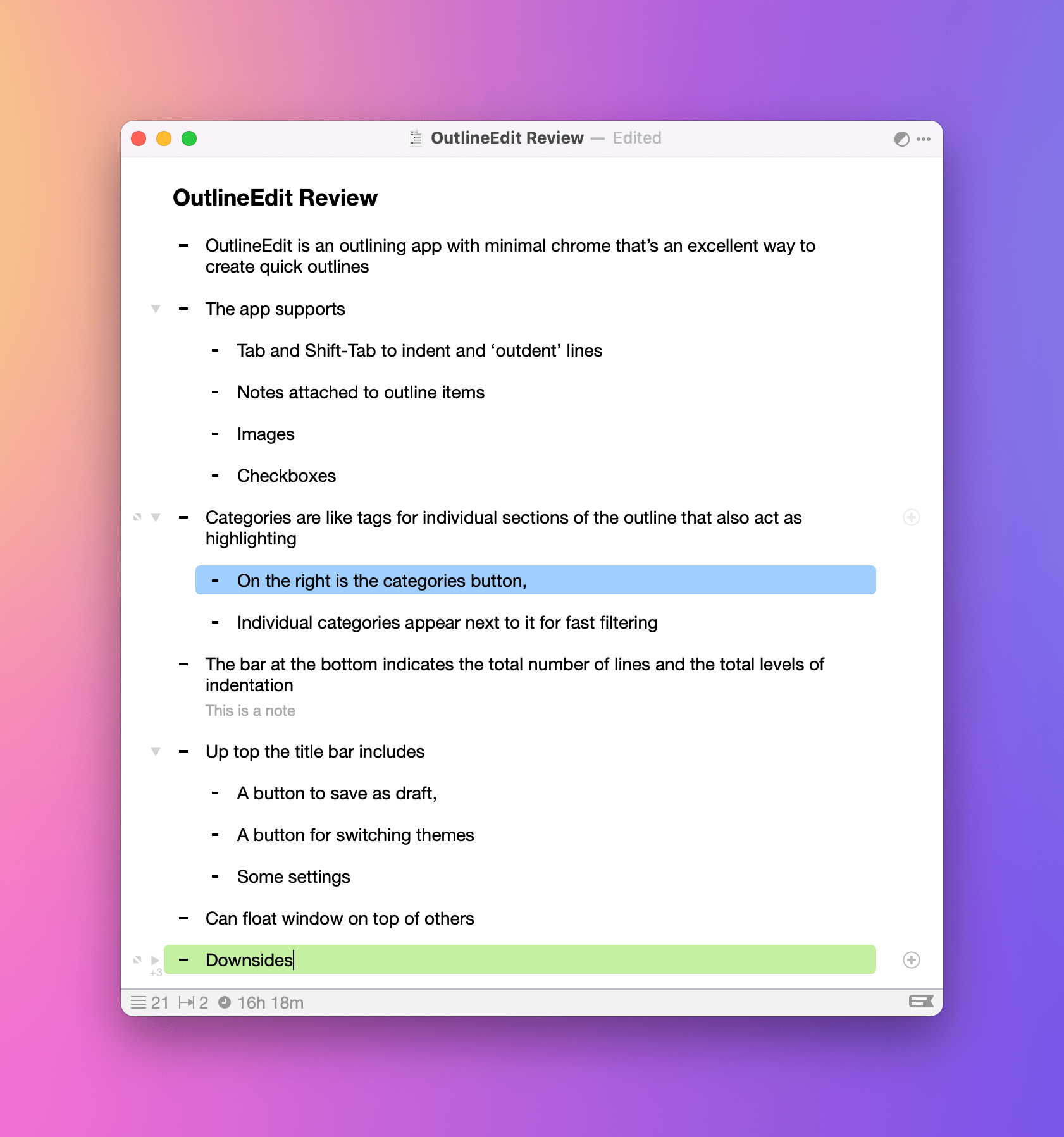 Here, I’m using blue and green categories to highlight a couple of lines of an outline.

Categories, which are color-coded tags that can be applied to individual lines of an outline, have been expanded in version 3.0. The Categories button is in the bottom right-hand corner of OutlineEdit’s window. Click on it to add up to 10 categories per outline and assign sets of predefined colors to them. Categories can then be applied by clicking the plus button on the far right side of every line of your outline. Once applied, the categorized line is highlighted with the category’s color, and a new color-coded button for the category appears at the bottom of the window. Click the category’s button to filter your outline by that category. It’s a quick way to focus on parts of an outline that aren’t part of the same section but are related for other reasons. 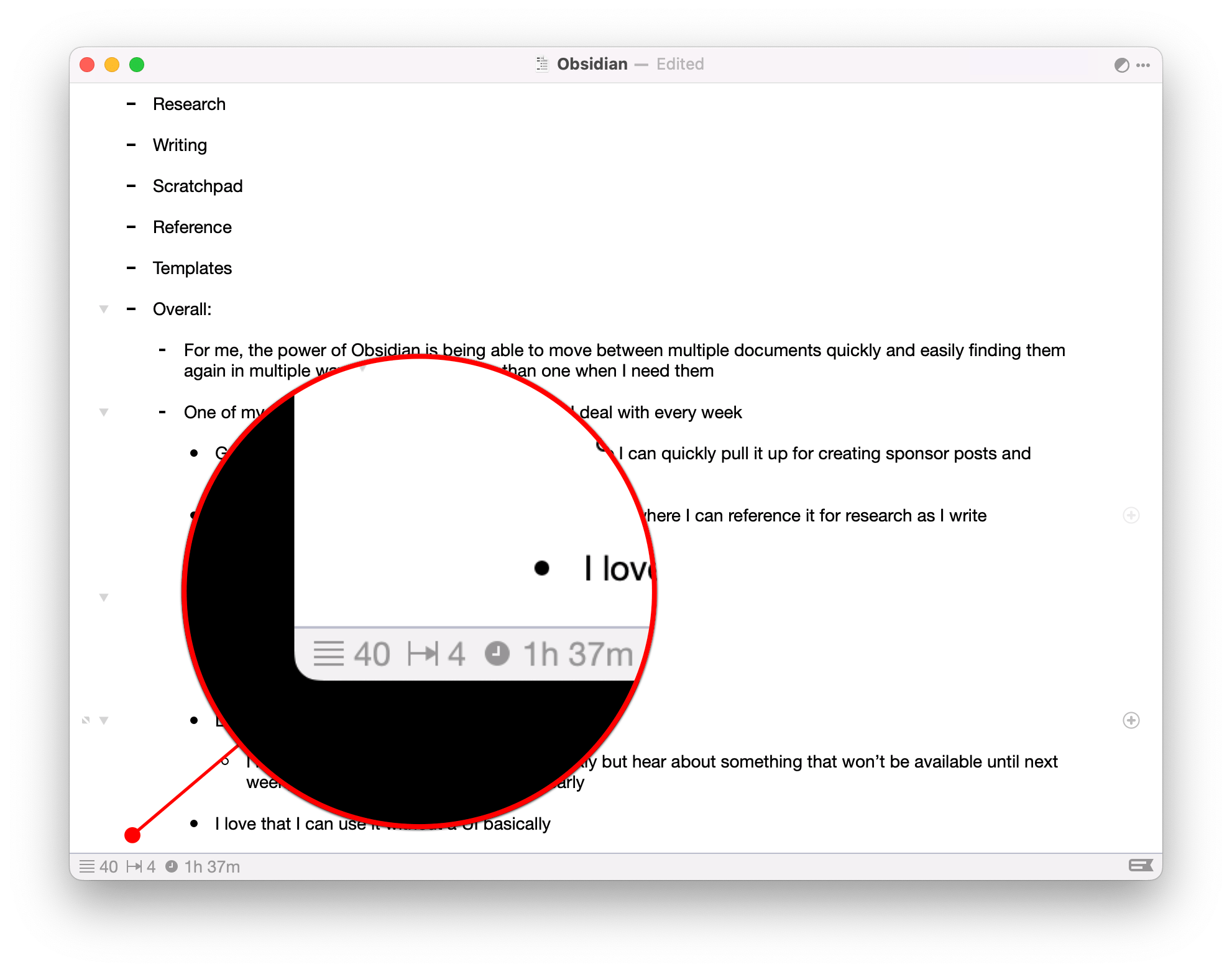 It’s not new to version 3.0, but the other bit of UI along the bottom of OutlineEdit’s window is a series of statistics that you can turn on and off in the app’s preferences. By default, the stats show the number of items in your outline and the total number of indent levels. Other statistics available include the character and word count, the time spent creating the outline, and the number of items checked off using the app’s optional checkboxes that can be turned on to display to the right of each line.

OutlineEdit’s Home view for managing your outlines and accessing templates.

OutlineEdit takes a unique approach to managing files. You can create new outlines using the menu system or the app’s separate menu bar app. Version 3.0 of the app also allows outlines to be saved as drafts with a button located in the top right-hand corner of the window, which is faster than dealing with picking a destination folder and name but might be more useful if saving happened automatically. OutlineEdit 3.0 also adds support for templates. An outline can be added as a template from OutlineEdit’s menu bar app or its Home view. If you create an outline from a template, an unsaved copy is made for editing, preserving the original template for reuse later. Finally, it’s worth noting that OutlineEdit offers a total of 10 brand new light and dark themes.

I’ve enjoyed using OutlineEdit again for the first time in quite a while. The app isn’t radically different from what I reviewed in 2016, but that’s okay. The app’s strength continues to be its its editor, which makes it easy to create structured outlines quickly. New features like the addition of images, templates, themes, and category filtering all extend out from the app’s core editor, making version 3.0 of OutlineEdit the best version of the app yet.

There remain a handful of areas I’d like to see improved further, though. First, it’s Mac-only, which will be a deal-breaker for anyone who wants to work on their outlines using an iPad or iPhone too. Second, exporting to plain text is limited. With support for features like images, I understand that not everything OutlineEdit can do can be translated to plain text easily, but I was hoping I could use OutlineEdit to open existing Markdown files with bulleted lists for editing, but I can’t. You can, however, copy an outline to the clipboard as plain text and paste it into other documents or export it as a PDF, OPML, or rich text file. I also wish checkboxes weren’t an all-lines-or-nothing proposition and would appreciate the ability to customize the glyphs used for each level of an outline.

Still, if you’re looking for a dedicated outliner and don’t need iPad, iPhone, or plain text support, OutlineEdit is an excellent choice. The app has one of strongest keyboard-driven editing cores I’ve seen for organizing your thoughts into outlines.

OutlineEdit is available on the Mac App Store for $32.99.