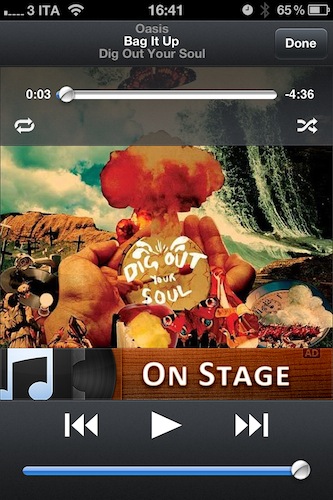 In the weeks leading to Apple’s WWDC announcements, there was one possible feature of iOS 5 that was making the rounds of the Internet, meeting many people’s expectations for the new OS: the possibility to create shortcuts for anything on a device’s Home screen would have been an interesting option to, say, let users create a WiFi icon to quickly access Network settings without opening the dedicated app. Playing around with the concept of aliases and app-specific shortcuts, the theories surrounding iOS 5 pointed at Apple building such a functionality to reduce the time spent tapping and scrolling around. That, of course, didn’t happen, but it hasn’t stopped third-party developers from releasing their own solutions that take on this idea of “creating Home screen shortcuts”.

Musicon, a new iPhone app by developer Fabian Kreiser, enables you to create Home screen icons for music albums you have synced on your device or, if you’re rocking the latest iCloud features, bought on your computer and automatically pushed to your iPhone. Musicon works like this: it scans your music library (the one from iPod.app, or Music.app if you’re already on iOS 5) and fetches albums and album artworks. If music is playing from the native iOS app, a “Now Playing” button lets you control it – this app isn’t meant to be a music controller on its own, unlike Kreiser’s other iPhone app On Stage. In fact, if you have On Stage (which we reviewed here) installed on your device the app won’t show any advertisement. 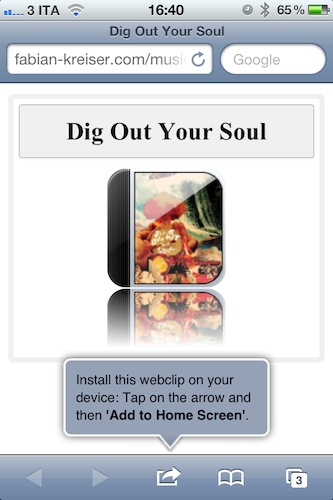 Once you’ve found an album you like, select it, and hit the big “Install Webclip” button. The app will already display a preview of the icon that you’ll end up with in the Home screen in the upper section of the screen. As you hit the button, Musicon does its thing to create a shortcut: it takes you to the developer’s website to install a webclip on your device. That’s right, these shortcuts are nothing but links to a webpage that somehow takes you to Musicon after you tap on the icon. Music will start playing in the native iPod app, and Musicon will come in foreground with the playback control UI. Not the most elegant solution if you ask me, but it works and the Home screen icons shine on the Retina Display.

Musicon is free, but I wish I could pay to remove advertising without having to keep On Stage installed. The idea is pretty nice and I can see why some people would want to save a couple of albums for quick access on a daily basis – if you’re one of them, get Musicon here and start creating your own shortcuts.