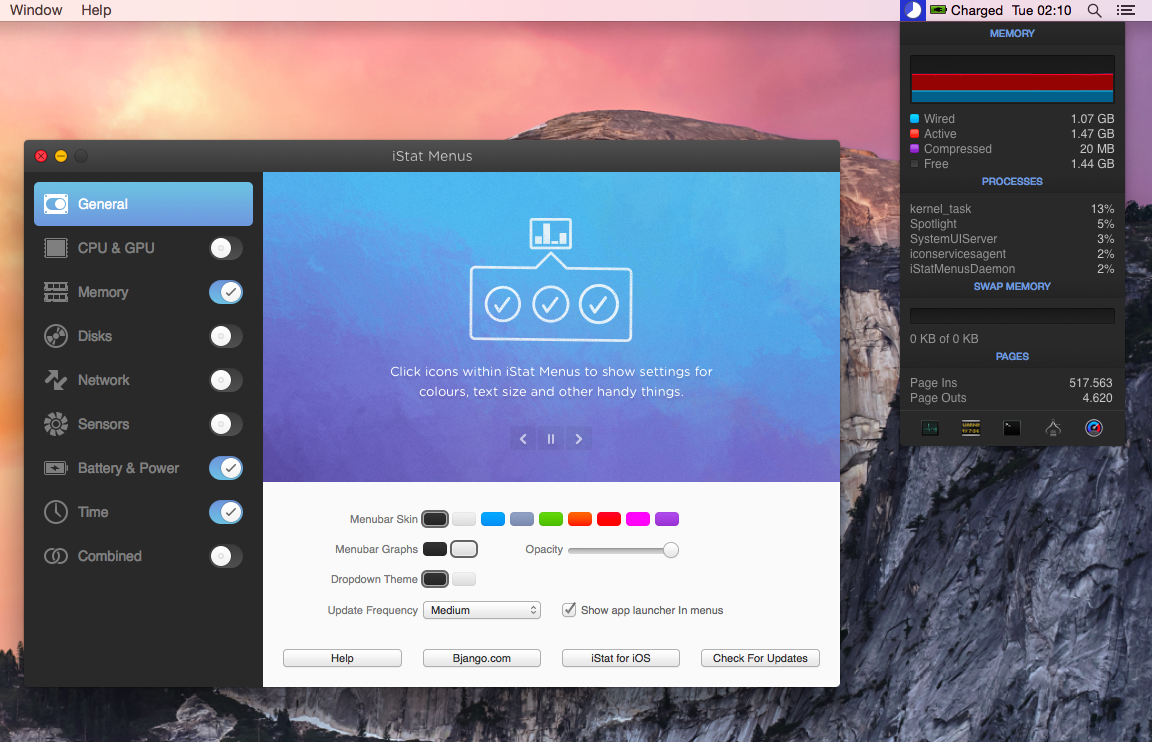 Two years after the release of version 4.0, Bjango has launched iStat Menus 5 today, adding hundreds of new features and improvements, and bringing a new design for both OS X Mavericks and Yosemite.

I’ve never used all of the functionalities that iStat Menus offers, but I rely on a couple of menus that have been tastefully crafted to strike a balance between polished UI and utility. iStat Menus isn’t an app I constantly interact with, but it’s always there in my Mac’s menu bar, and it’s one of my must-have apps that I mention every year.

The premise of iStat Menus hasn’t changed with this release: by deeply integrating with OS X and Mac hardware, iStat Menus places a series of icons in your menu bar that can be clicked to reveal dropdowns with information and graphs for CPU and memory usage, network access and consumption, battery life and health, disk space and read/write times, and even time zones and calendar events. I don’t need all the information and status reports that iStat Menus can give me, but I’ve been keeping the app’s time, battery, and memory icons in my menu bar for years now. I like the convenience of avoiding a trip to Activity Monitor when I need to figure out what’s consuming too much RAM, and, overall, I prefer Bjango’s widgets to Apple’s. iStat Menus 5.0 doesn’t change the basic interaction or my preference for Bjango’s take.

In iStat Menus, you can customize the colors of the app’s icons – with the new version, you can switch to Yosemite’s dark menu bar mode and set dark dropdowns. The app has already been tested with 10.10’s new dark menu bar, which is a welcome replacement to the popular third-party Obsidian Menu Bar hack. 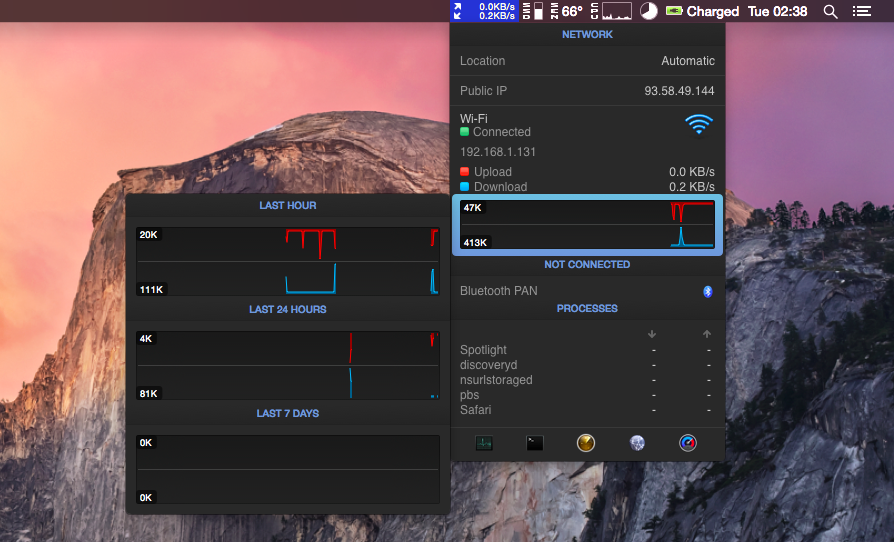 In the General tab, you can set colors for icon skins, choose to make dropdowns light or dark, and tweak menu bar graphs; when adding a module, you’ll see your preferences reflected in a tinted icon you can drag at the top to make it active. 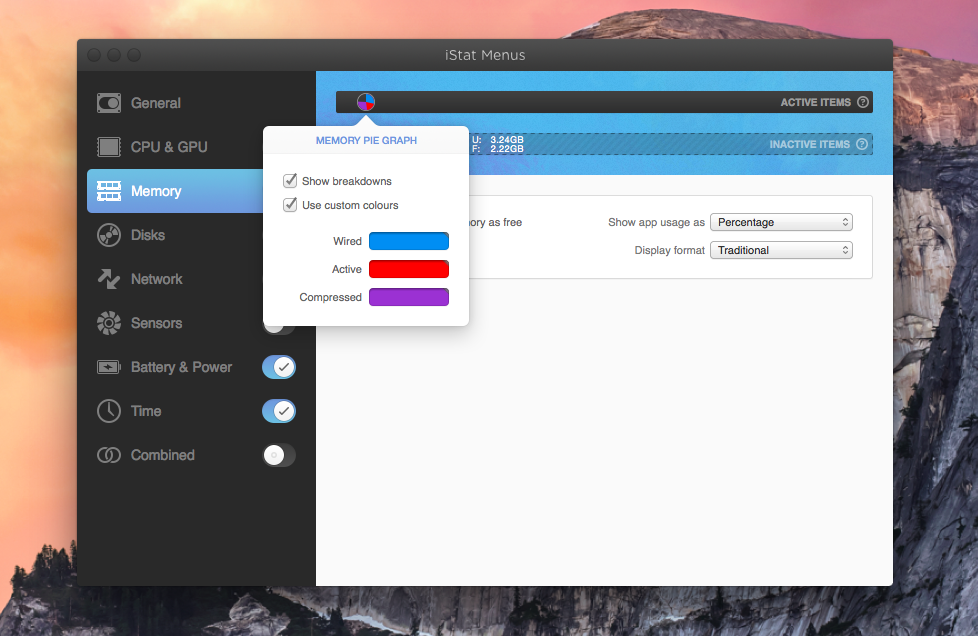 What’s better about this customization now is that it looks great with Yosemite’s dark menu bar. I like to keep a memory pie graph for my MacBook Air’s RAM, and by clicking the icon I can show breakdowns and, if I want, choose custom colors for wired, active, and compressed memory (the latter a new feature for OS X 10.9 and above). Or, if my battery is draining, I can set its icon to be purple instead of green. It’s a little touch, but I like the personalization and the way colors pop on Yosemite’s dark menu bar. Plus, with per-app memory usage as a percentage of total memory (per-app information is new in version 5.0 and also available for CPU and disk activity), I can have an easier understanding of which app is doing what to my mid-2011 Air.

I asked Bjango’s Marc Edwards about the new menu bar in Yosemite, and he noted that “iStat Menus 4 sported quite a few features for use with Obsidian Menu Bar”, adding that “an official dark menubar mode in Yosemite has meant we can take things even further”. 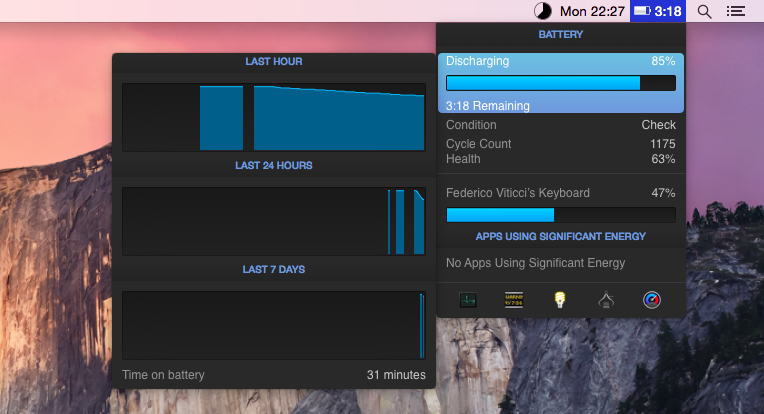 One of my most-used iStat dropdowns, the battery module, has received a significant overhaul in version 5.0. iStat can show battery life for your portable Mac as well as connected battery-based accessories (like a Bluetooth keyboard) with a compact UI and colored progress bars. In iStat Menus 5, you can create custom battery notifications for low battery warnings, which will be shown using a native Notification Center alert. Like Mavericks’ battery icon, iStat Menus can now show apps using significant energy, which has allowed me to forego Apple’s battery menu completely.

In iStat’s battery dropdown, I can check out new history graphs for battery discharge and see stats such as cycle counts and health (in percentage points). It’s this all-in-one approach with a single dropdown that packs all of these details that makes me favor Bjango’s solution over Apple’s built-in tool. 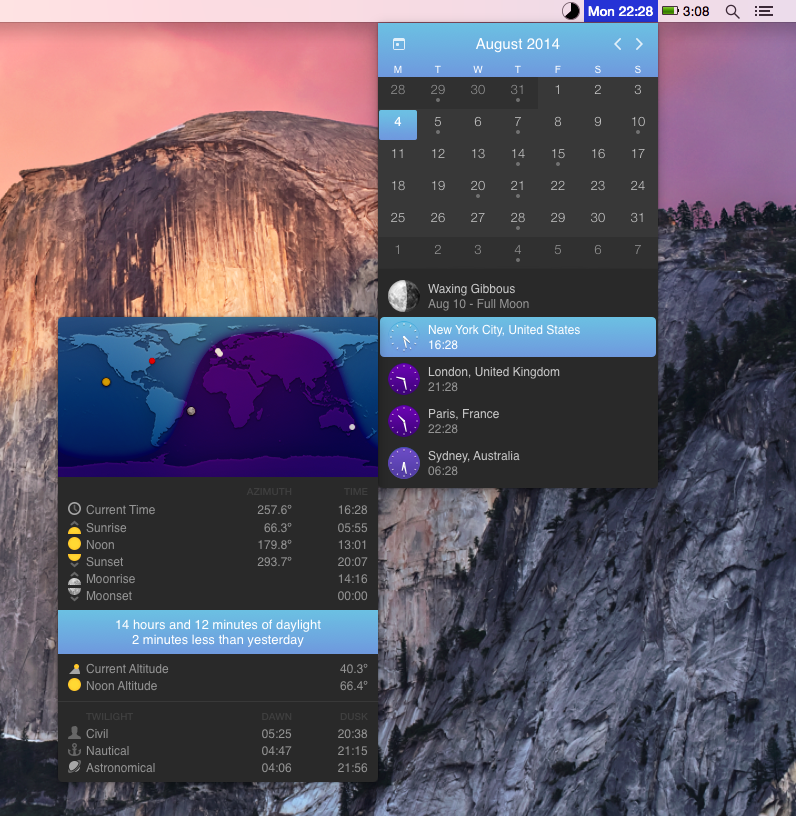 The other iStat Menus dropdown that I’ve been using for years and that I open several times each day when I’m at my Mac is the clock one. By combining a classic digital clock with a time zone reference tool, iStat Menus lets me quickly check the time for locations that I’m interested in, either for MacStories’ readership or my team.

In version 5.0, there’s a new nighttime clock face in the dropdown and, more importantly, the city database has been completely rebuilt with over 120,000 cities. When you head over a city, the submenu has been redesigned with the addition of a great-looking sunlight map and sun information that I don’t really need, but which is cool to have to pretend I know when the nautical dawn in Perth is (06:07 today).

There are dozens of new features in iStat Menus 5 that Bjango has documented on the app’s website and that I haven’t covered here, such as the ability to hide individual sensors, a CPU load average menu bar option, app upload stats to network, and more. None of these new options fundamentally changes the way iStat Menus works, but the result is an improved app that’s intuitive, works like I expect it to, and that’s already compatible with Yosemite and its redesigned interface. I’m especially fond of the additions to battery monitoring and the clock dropdown, and, even with my limited use case, I’m happy to pay again for iStat Menus two years after the release of version 4.0.