Metapho can be run as a standalone app or from the share sheet in another photo app. I primarily use Metapho’s action extension from the share sheet, which lets me view the metadata for an image and strip it if I want. When you tap Metapho’s action extension, it displays the photo’s metadata broken into sections dedicated to image, camera, and location information. There’s also an additional share button that lets you share the photo with or without metadata, a ‘Show All’ button to see expanded metadata that can be copied to the clipboard, and a button to open the image in the main Metapho app. 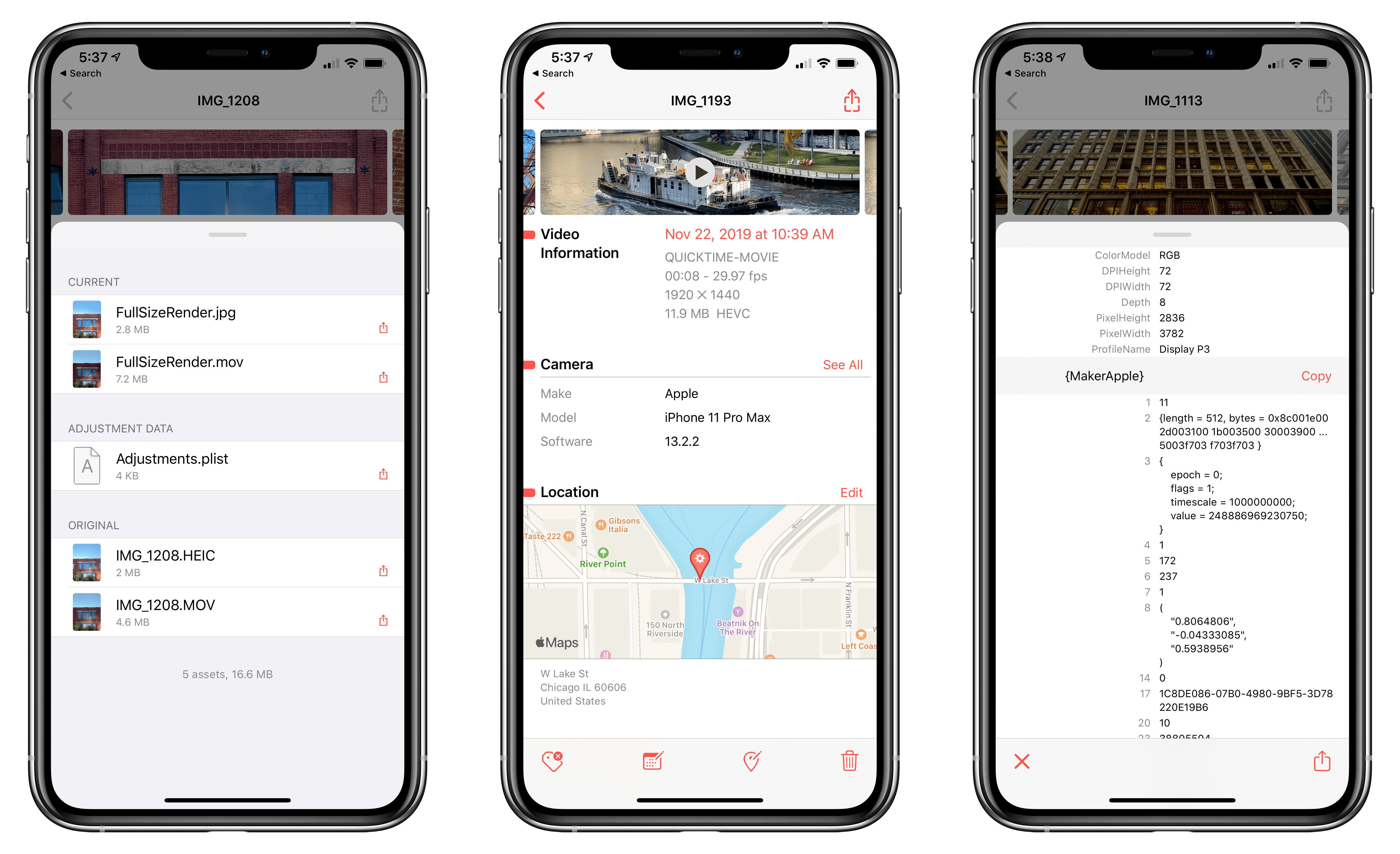 Examples of the metadata available in Metapho’s main app.

The main app includes the same features as the extension with the addition of several more. From the main app, you not only can strip a photo’s metadata, but you can also edit the date, time, and location metadata and then save it nondestructively or as a new photo.

The main app also allows you to access all of the assets associated with an image. For example, with a Live Photo, you can access the HEIC and MOV files that make it up, using the share sheet to send either to another app. For an edited Live Photo, though, there are five assets: the original HEIC and MOV files, a .plist file containing the adjustments made to the image, and the edited JPG and MOV files. When the iPhone’s camera captures extended image data beyond the frame, Metapho includes that among the available assets too. You can also batch edit date, time, and location metadata and strip metadata information from multiple images at once.

I wasn’t surprised that these shots, taken on a sunny morning in Chicago, did not use Deep Fusion.

However, I was surprised that these shots, taken around the same time in different locations, did use Deep Fusion.

How does Metapho detect Deep Fusion and Night Mode shots? As developer YoonHyung Jo explains in the app’s release notes, Night Mode is detected based on the number of images composited. Deep Fusion detection relies on the integer value returned when the camera takes a shot with the flash turned off, which is different than the value returned when Deep Fusion is not triggered. It’s a technical and clever way of detecting Deep Fusion that hopefully won’t be broken by Apple with future changes to how it records metadata.

Although knowing after the fact that Deep Fusion and Night Mode were enabled won’t necessarily change anything in my photography, it’s still interesting to browse through my photos to see which used these features and which didn’t. Last Friday, I walked around the Chicago Loop and Near West Side for a couple of hours taking photos. I was surprised at how often Deep Fusion was used in outdoor shots on what was a relatively sunny day. The sun was blocked in many shots by the buildings around me, but it was by no means a dreary day. However, where the streets were narrowest, Deep Fusion kicked in over and over, adding definition to the shots. Those shots that were taken in the open didn’t use Deep Fusion in most instances.

Irrespective of Metapho’s ability to detect Deep Fusion and Night Mode shots, I highly recommend it to anyone who enjoys photography. The ability to access image metadata, edit it, and strip it out when it includes more than you want to share are valuable tools to have at your fingertips. This is especially true because Metapho’s tools are so easily accessed from inside Photos and other image editors via the share sheet.

Metapho is a free download on the App Store with a $3.99 In-App Purchase to unlock metadata removal and editing.