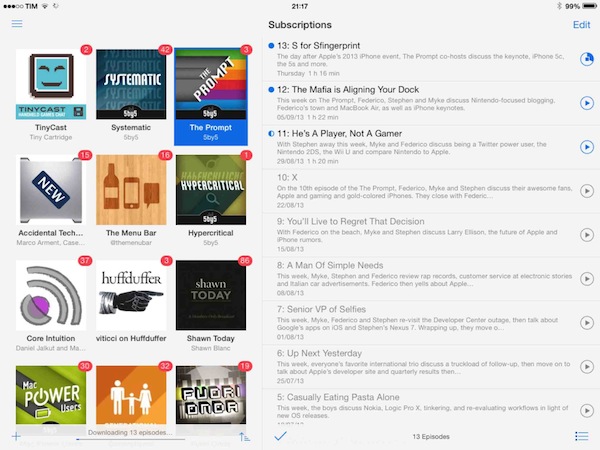 While Instacast 3 had a bumpy start, in time it matured into a solid app. Not only were the kinks worked out, but the new syncing engine enabled Vemedio to later launch a brand new version of Instacast for Macs running Mountain Lion. Together, this makes Instacast one of only three apps that can sync and play podcasts across desktops and iOS devices (the other two being Apple’s Podcasts + iTunes, and Downcast).

Intacast 4 is by far Vemedio’s best version of Instacast yet, and it’s a free update to those who’ve already purchased Instacast 3. Not only has the app been updated to adopt the look and feel of Apple’s translucency and flat iconography, it’s been significantly improved with the introduction of a sidebar and simpler now playing controls. Significant sounds funny, especially in light of a sidebar, but it makes Instacast much easier to navigate, less cluttered, and all around much more friendly to newcomers. 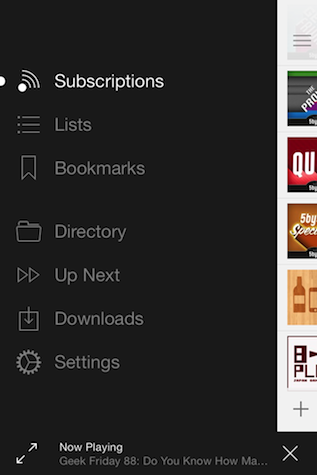 In previous versions of Instacast on the iPhone, everything was sort of crammed into one place. Where a tab bar above the subscriptions list once let you switch between subscriptions, playlists, and bookmarks, everything can now be found in a Spotify-like sidebar. Settings, a list of episodes that are up next (new in this version of Instacast), items that are currently downloading, and Instacast’s entire directory can additionally be found here. Some of these places, like the directory, have shortcuts from the Subscriptions view, but there’s no longer a question of where these things might be. The downloads manager for example could be found previously by tapping a progress bar, but it’s now additionally available under the Downloads label.

Downloads are much improved thanks in part to new background APIs in iOS 7. What this means for Instacast is that as long as it’s open in the background, subscriptions set up for downloading will silently download the latest episodes and notify you when they’re ready. It’s a huge improvement over iOS 6, as it goes beyond simple availability notifications and the ten minute background limit. Impact on battery life, despite having downloads ready to go as soon as you open the app, isn’t noticeable. In addition, you can individually download episodes from the directory (instead of having to subscribe), with episodes ending up in an Imported Episodes playlist. 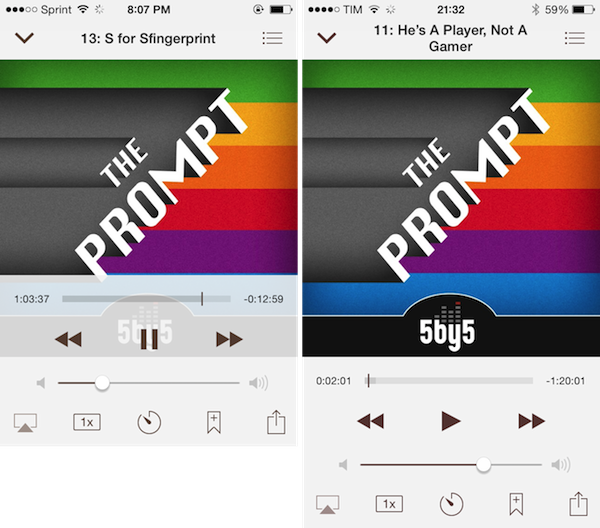 The now playing screen does away with the combined scrubber and controls, removing the need to swipe back and forth between the two. I think it’s a big improvement, and if I had any complaints, it’s that you still have to cycle through all of the timer options. Interestingly, on the 3.5-inch Retina display, the controls cover up a bottom portion of the artwork. I think it’s an okay trade-off considering there’s translucency, but it’s a sign that smaller displays are now second-class citizens. Even Apple, in iOS 7, has optimized their included apps for larger 4-inch displays. (And yes, you can listen to podcasts at 3x their normal speed.)

I’m semi-happy to see the removal of the continuous playback button. Introduced in Instacast 2.0, continuous playback was implemented as a way to work around sorting. What it meant was that you could continue playing podcasts before or after the episode in your feed or playlist, but it was confusing because that order could change depending on how your episodes were sorted. Replacing that feature is Up Next, which works similarly to how it’s implemented in iTunes. You can manually add episodes to Up Next by tapping and holding on them. If you stop playing an episode and start playing another, the episode that you left is added to the Up Next queue. I say “semi” above since I wish it was more automated. If I decide to play an episode from a playlist, I would expect the remainder of that list to be automatically added to the queue.

There are some great little details in the app that shouldn’t go unnoticed. The Now playing controls will adjust their appearance based on podcast artwork, showing up in different dark hues to complement what’s currently playing. It’s a subtle effect, as is the physics-based animation when revealing the sidebar. There’s little touches like this throughout the app that make it feel springy or bouncy. The icon too has been updated for iOS 7, its silver bezel now removed revealing the candied orange squircle underneath. 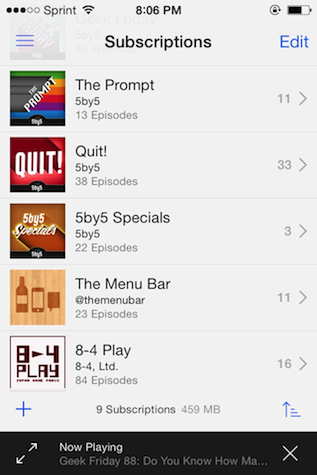 Otherwise it’s business as usual. Instacast still puts subscriptions front and center, with lists letting you find and organize particular play orders. I find this preferable, since I just choose who I want to listen to and pick an episode. Counter to an app like Downcast, where playlists and filters are king, Instacast 4 works on per podcast basis. If you want podcasts to show up in a specific list, you have to visit each respective subscription and send it to that list in its settings. Default smart lists sort podcasts into Played, Partially Played, and Favorites, just to name a few. I like this approach, but those who listen to their shows during long commutes might want to spend some time getting familiar with audio downloads and per-podcast settings.

The per-podcast settings are what sets Instacast apart from a lot of apps. In the settings, tapping on subscriptions lets you turn subscriptions on and off, as well as just their unique settings. These settings let you individually order each feed to your liking, auto-download specific content (maybe you want to download only that feeds videos but not the audio), and auto-delete downloads based on whether the podcast has finished playing. Otherwise, these settings just default to general and offline storage settings.

Perhaps Instacast’s only fault is the redundancy of views throughout the app. There are multiple places and shortcuts (such as tapping and holding on a subscription) where you can configure per-podcast settings for example, and a couple ways to access the directory and downloads manager as well. I’m used to it, but I’m honestly not sure if having certain shortcuts makes the app more convenient or more confusing to newcomers. 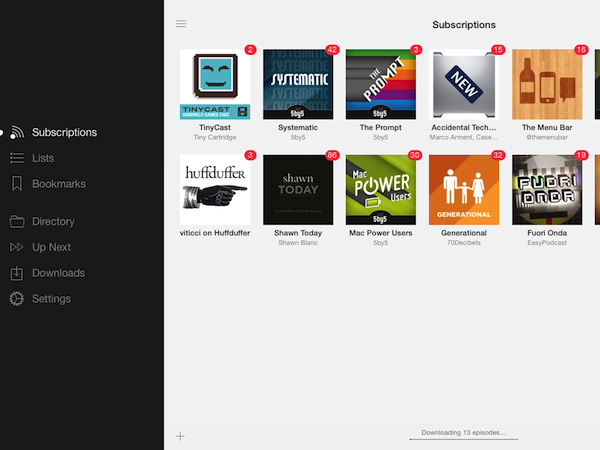 While I haven’t talked specifically about the iPad version too much, its update is very similar to the iPhone’s. Tabs have been eschewed for a sidebar, but it’s otherwise the same as the previous version. It’s just as handsome as the iPhone version, and I’m still a big fan of how Instacast presents podcasts in a grid format instead of a list, making good use of the larger display’s extra real estate.

In fact, Instacast 4 follows the same formula Vemedio has been following all along. It’s an iterative update, one that takes advantage of iOS 7’s new look and improvements. The app feels much more cohesive than before, and much friendlier to use thanks to some better organization and player improvements. Those who download podcasts can additionally look forward to better background downloading in iOS 7.

Instacast 4 requires iOS 7, and is a free update for those who purchased Instacast 3. For those who don’t wish to update or for those who will have a mix of iOS 6 and iOS 7 devices, Instacast can still sync with the previous version of the app. It’s available to download for $4.99 in the App Store.