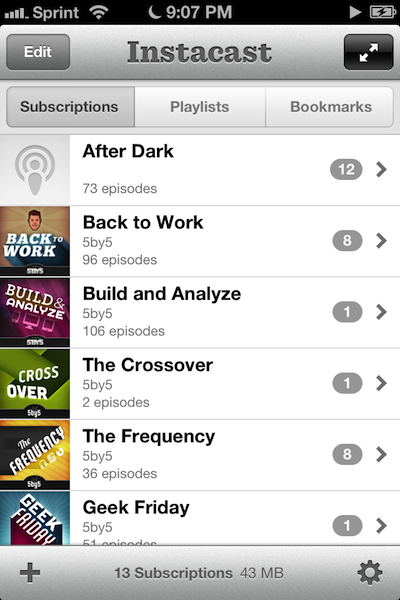 Instacast 3 is both iterative and something different. No longer divided into separate iPhone and iPad apps, Instacast 3 is universal, also eschewing the in-app purchase model introduced with Instacast 2. And at its core, iCloud sync has been gutted and replaced with Vemedio’s own syncing solution that’s faster and less error prone (an in-house solution that works with WebDAV.). On the iPad, Vemedio has completely redesigned their Twitter-for-iPad inspired interface in favor of a more parallel experience with the iPhone. Just as Apple makes small iterations to their hardware, Vemedio has made small iterations to their software. 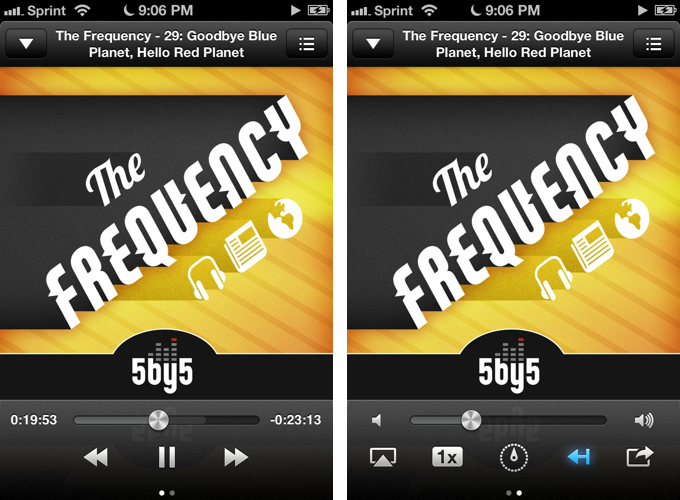 The previous in-app purchase model and lack of parity between Instacast’s apps ended up being confusing for customers. Couple that with slow and sometimes inconsistent syncing over iCloud, and Vemedio had no choice but to completely rebuild the engine underneath the hood. It’s unfortunate that iCloud isn’t as reliable as it could be. Progressively, it felt like Instacast sync was getting worse throughout its lifespan. At launch, I found Instacast’s sync to be quite good. By the end I simply dealt with its problems.

Instacast 3 is a response to solving these core issues. It’s also a response to finding a pricing model that works. It’s a single app costing $4.99 that gives you all of the features right out of the box. No in-app purchases. No subscriptions. Just an app. You will need to sign up for a free account from the settings to enable sync — it’s simply a username and password to associate Cloud Sync with you.

The upgrade to Instacast 3 isn’t free for previous customers. As the App Store doesn’t offer a way to pay for upgrades, Vemedio decided to launch a brand new application. In fact, this is how The Iconfactory handled Wednesday’s launch of Twitterrific 5. Vemedio charges for apps (and previously charged additional for extra features) to recoup development costs and maintain their podcast directory. I want to see Instacast stick around. I’m personally happy to the pay for the app. It’s been my mainstay for podcasts for a long time and I don’t want that to stop.

Instacast 3’s Cloud Sync is much improved over iCloud. Having the privilege to use Instacast while it was in beta, it is as fast as Vemedio promises it should be. With iCloud, the best results were had if you waited a few minutes. The best analogy I’ve got is how long it takes to make your cup of coffee. The new Cloud Sync? It’s pretty quick. I can pause Instacast on my iPhone, put it to sleep, pick up my iPad, and it will sync up where I last left off. Instacast couldn’t always sync up podcasts between now playing views, especially if I was playing different podcasts concurrently (who would do that?), although that’s to be expected. You can try to nitpick and intentionally break the sync, but I think it works as intended.

Some people on Twitter have been vocal that they cannot get past the initial Sync Reset when importing their subscriptions from iCloud into the new Cloud Sync. A bug’s a bug, and the next version of Instacast, 3.0.1, reportedly fixes this issue. As for syncing problems, it has not been representative of my experience. I’ve never had my 13 subscriptions (with others parked) not sync in the new engine. Maybe it’s launch day server strain. Maybe subscriptions aren’t being rejiggered correctly for Cloud Sync. Regardless, I suggest trying again, or resubscribing to your podcasts as a method of troubleshooting. Cloud Sync has been great in my time reviewing the app. 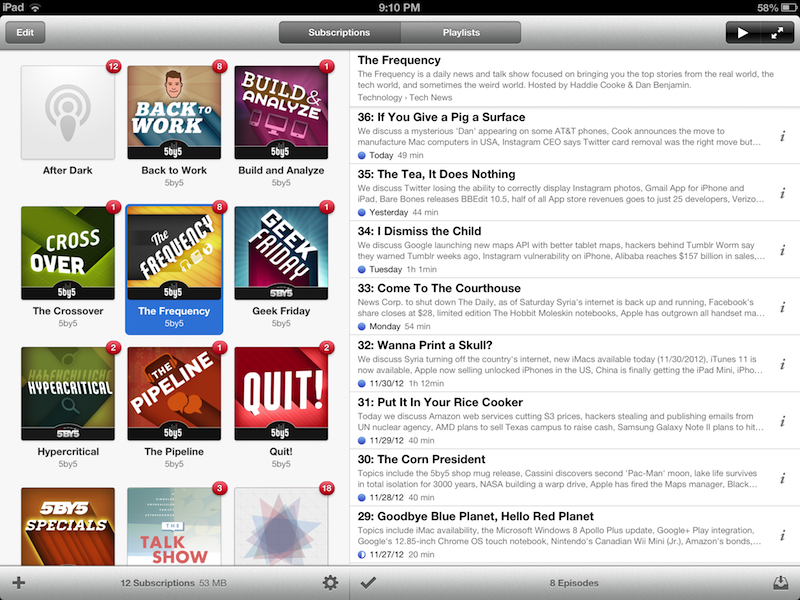 Cloud Sync underpins many of the design changes that have been made. Particularly, Instacast 3 on the iPad now shares most of the same concepts as the iPhone app. The main difference is that instead of having subscriptions displayed in a list, they’re displayed in a grid. My main complaint with the subscription gutter in Instacast HD was that moving subscriptions was a chore. In Instacast 3, reordering a grid of podcasts is no different than rearranging apps on your home screen. What sweetens the deal for me? If you add new subscriptions on your iPhone, you can watch them appear on your iPad during the next sync. 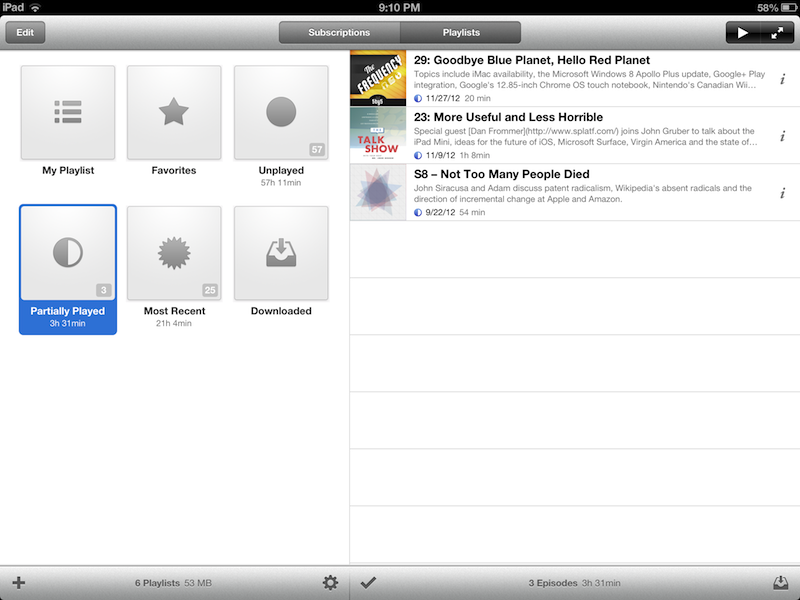 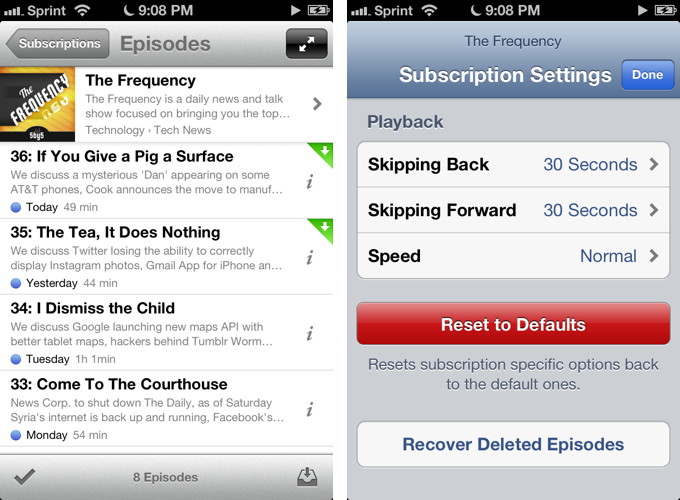 I don’t know if I particularly care for an update made to the episode list. Archived episodes, which had their own view in the first Instacast and were later moved underneath an archive label in Instacast 2, are now completely hidden. They can be recovered by revisiting a subscription’s settings and tapping a big Recover Deleted Episodes button, but I can’t say it’s particularly easy to find and it makes listening to a subscription’s back catalogue difficult. 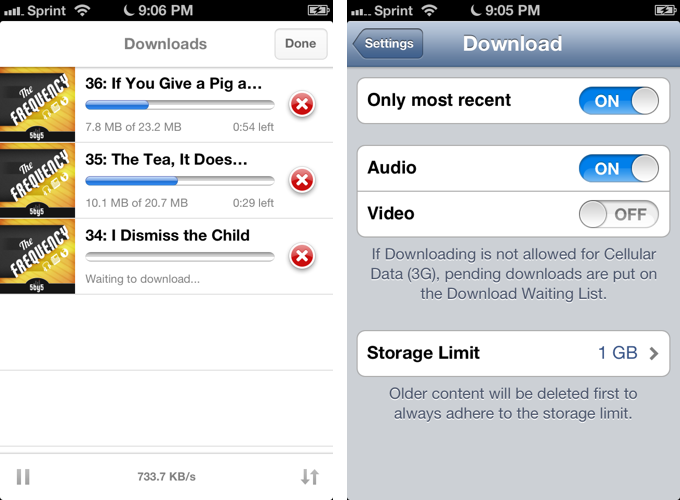 Substantially better is how Instacast handles downloads. A storage limit, whether it be 512 MB or 5 GB, can be decided in the settings. Once the storage limit is reached, the played, non-favorites, and oldest downloaded episodes will be deleted first. You can also manually manage storage on your device by visiting Offline Storage in the settings. 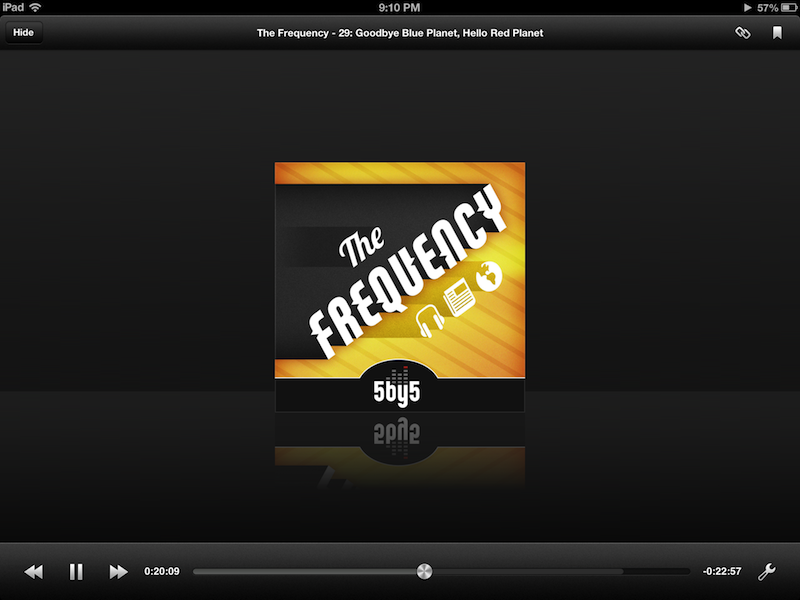 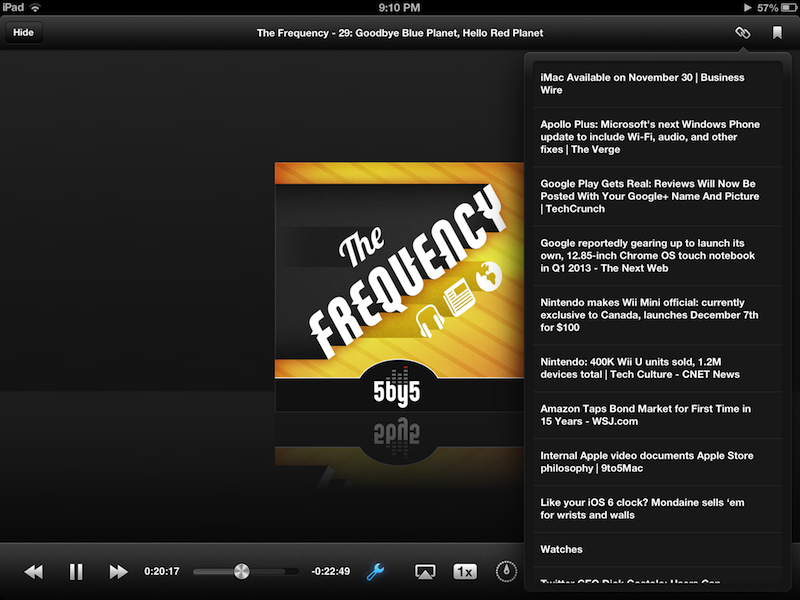 I haven’t warmed up to the changes made to the now playing view. The same controls are still there on the iPhone, but instead of sliding up you slide left to reveal them. On the iPad, controls are matched with the iPhone’s except that they’re revealed by tapping a wrench icon. In keeping the interfaces mostly the same, I feel like there’s lots of wasted space on the iPad. Artwork is small, and controls are grouped tightly together at the bottom of the display. In both the iPhone and iPad (landscape) interfaces, the volume slider is hidden with these extra controls. For the iPhone, using the scrubber sometimes led to accidental swipes revealing the extra controls. I don’t think these controls are better iterations of what they were previously. For the iPad especially, I think having show notes and links displayed alongside the artwork might make better use of that space (instead of having them in a popover through a link button).

While Instacast HD was laced with great animations and cool sliding panels, bringing it to parity with the the iPhone interface ultimately leads to a much more holistic and intuitive experience. It just feels a lot faster. On the iPhone Instacast is largely unchanged. Vemedio is trying something new for the now playing screens, but I don’t know if it was necessary. Overall, Instacast offers a consistent experience across all devices.

Of the big two podcatchers, a question a lot of people ask is, “Should I use Instacast or Downcast?” I don’t think people using Downcast are going to be persuaded to use Instacast. I think that’s perfectly fine. Fundamentally, Instacast and Downcast are very different apps with very different opinions on how podcasts should be consumed. How the apps look, behave, and deal with settings and playlists are completely opposite. Let’s take a look at playlists as an example. In Downcast, playlists are built with very specific filters that pull in podcasts that meet the requirements you set. In Instacast, it’s completely reversed. You specify the settings you want per podcast, then push podcasts to playlists you want them to show up in. Depending on how you want to manage podcasts, I don’t think one camp is compatible with the other.

Instacast’s best improvements lie behind the interface. Instacast 3 could reasonably be compared to an iPhone update — same skin, different guts. Cloud Sync, at least in my time with Instacast leading up to the launch, has been substantially better than the previous iCloud implementation. In their FAQ, Vemedio even states that the foundation they’ve laid paves the way for an OS X app. Currently, it seems that a sync app is in the works so that you can manage subscriptions from a local server. For $4.99, Instacast 3 is selling you an app that has their own Cloud Syncing solution, a better iPad interface, and a new storage limit feature for better managing downloads.

Editors note: Originally I wrote that Instacast 3’s Cloud Sync was based on Simperium Sync. While it was evaluated for this release, Vemedio ended up rolling their own custom file based solution that works with simple WebDAV servers.