Behind The Scenes Of Twitterrific 5 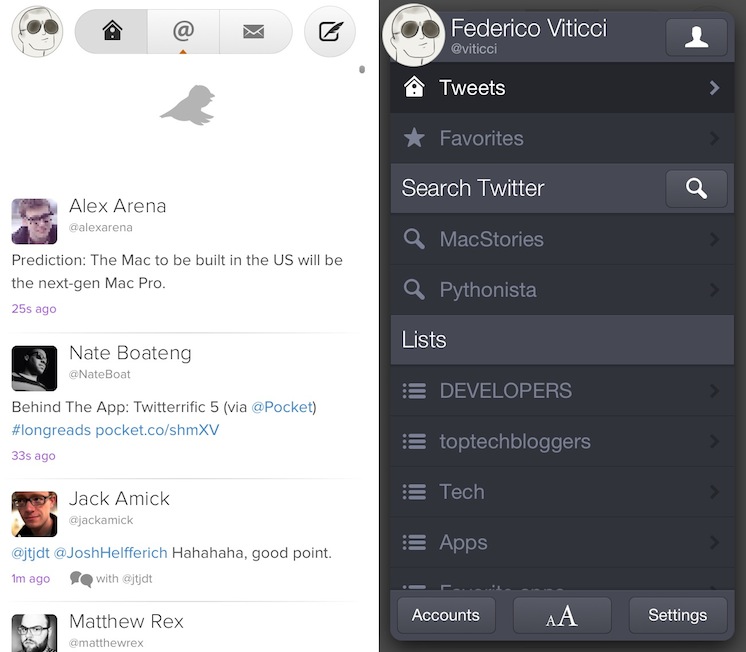 The Iconfactory’s Craig Hockenberry has published a “behind the scenes” look at their most recent release, Twitterrific 5. I recommend reading it, as it doesn’t involve too many technical aspects of the software, but instead puts the decisions made by The Iconfactory in more context:

We are well aware that people are going to complain about missing features: push notifications and streaming are obvious examples. But so are trends, and video support, and in-line photos, and… well none of that matters. We believe in building opinionated software.

Our Cody Fink, in his review of Twitterrific 5 posted last night:

Here’s my take on Twitterrific: it is the result of a very specific vision. The Iconfactory doesn’t prioritize notifications, filters, third-party service integration, or custom image uploads as much as they strive to build an extremely polished Twitter client meant for reading.

I am what you may call a “Twitter power user”. There’s truth to that: I use filters, custom uploads, web services, and I spend most of my day on Twitter. Twitterrific isn’t meant for me. Thinking to rely on it as my go-to Twitter client will probably make me frustrated in the end, leading me to “hate” an app that’s actually made by nice people. I don’t want to do that.

So I have a simple suggestion. If you don’t think Twitterrific 5 can be your main client, it doesn’t have to be. No one is forcing you to buy the thing everyone is talking about. You’re probably not “missing out”. But I will also say this: if you have three bucks and you’re genuinely interested in trying something new – a fresh experience – go get Twitterrific 5 and try it. I’m not saying it’ll become your favorite app, but if you care about quality handcrafted software, maybe you’ll take away something from it.

I’m glad I did, because even if Twitterrific won’t be in my dock, as someone whose job is to write about software, now I know that other things are possible.