It’s not hard to talk about the latest and greatest features of Instacast 2.0 when the developer has dutifully written his own epic walkthrough of his app’s new features. Instead of having to decipher release notes and a summary of bullet point features, Martin Hering of Vemedio has already published an in-depth write-up of everything “version two” has to offer, which includes a couple pro-tips here and there for those who aren’t skimming paragraphs and looking for bolded words. The mini-manual will be a handy reference for getting adjusted to Instacast’s tap-and-hold friendly UI and advanced features.

With the features already explained in great detail, I don’t feel the need to recap everything Instacast 2.0 has to offer or explain how it works, but I do want to share some of my experiences with the app post-upgrade. There are lots of little changes that have been made and thus lots of little habits that had to be relearned. While some of the changes take some getting used to, others have been improved upon so well that I could not think of going back to an older Instacast. Upgraded player controls, playlists, and bookmarks add a new pro-layer of control without dampening the player’s aesthetic or user experience. Additional sharing features strive to strengthen online discussion around podcasts thanks to commenting and an HTML5 audio player. 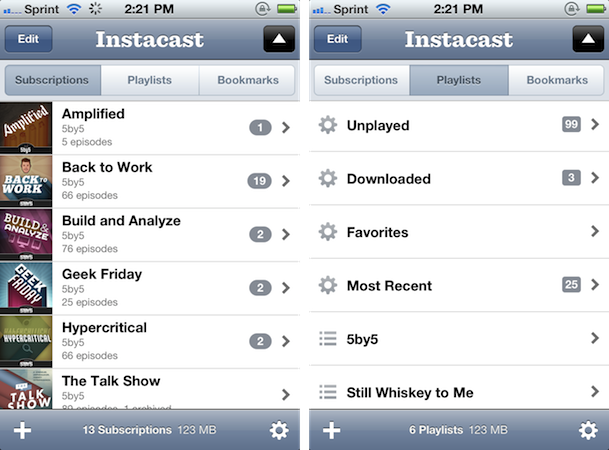 I don’t miss the Reeder-like icons. The newly added tab bar conveniently relocates previous filters like Favorites and Downloaded episodes to new smart playlists that are accessible through the Playlists tab. It’s easier to navigate Instacast 2.0 as text labels provide ample direction for discovering the podcatcher’s new features. Overall, I think the new navigation scheme is better than before. 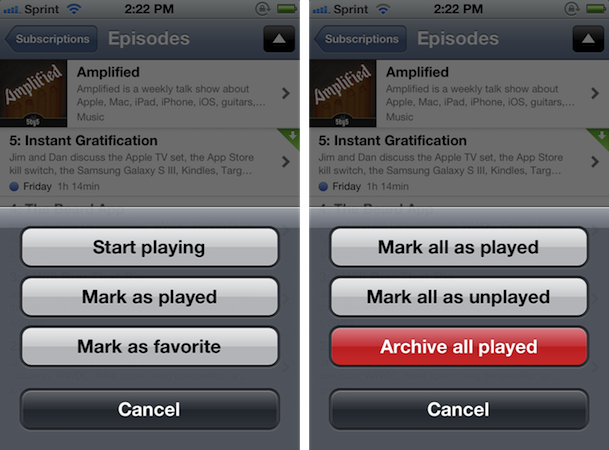 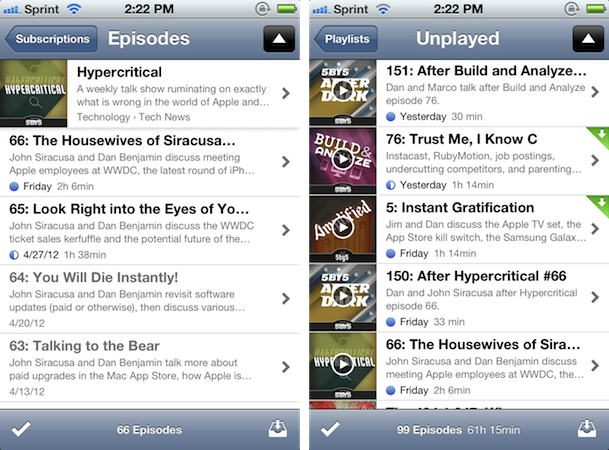 With Instacast 2.0, my habit of tapping and holding on an episode to start had to be changed. The previous instant-play feature has been replaced by a contextual menu instead, adding a second tap to the process. The contextual menu also includes options to mark an episode as played/unplayed or as a favorite, replacing previous gestural swipes that are now used to simply archive episodes. Interestingly, only available in the Playlists tab is individual podcast artwork that will immediately start or resume the episode if tapped — this jumpstart isn’t available in the Subscriptions tab. While I’m still getting used to the former, I do like having the ability to archive old episodes — it can be performed manually or set up automatically in the settings. Archiving makes all podcasts available, but hides played or older podcasts from view. 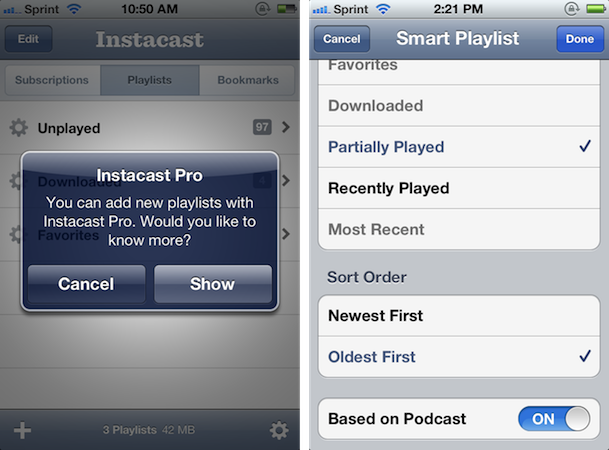 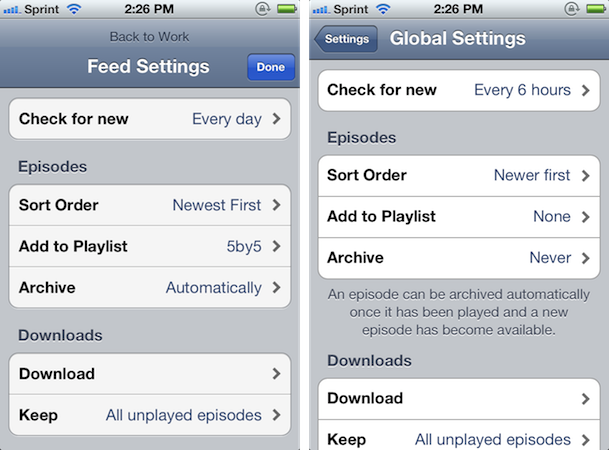 Playlists, in combination with per subscription settings, are powerful tools that showcase the potential Instacast 2.0 has for podcast management down the road. Smart playlists are fundamentally based on played status and sort order, while playlists are simply named containers that you can manually or automatically add podcasts to. For each podcast, you can set up individual settings that override global settings. For example: new Hypercritical episodes can be added to a 5by5 playlist and downloaded automatically in contrast to other podcasts that are not downloaded automatically. Sorting options per playlist aren’t available, but continuous playback options should currently solve your want for a certain play order in the pre-created playlists.

When continuous playback first launched in Instacast 1.3, I wasn’t a big fan of the feature. You could flip it on and off, but there wasn’t a lot of choice in how continuous playback behaved. With Instacast 2.0, its integration into the updated player controls has made it one of my favorite features. The right and left arrows signify forward and backward, telling Instacast whether to play the subsequent episode in the current playlist or subscription. Having the ability to reverse the play order for newer-sorted playlists has made continuous playback very useful on long trips and traffic congested evenings — being able to tap it on and off has also made a world of difference. 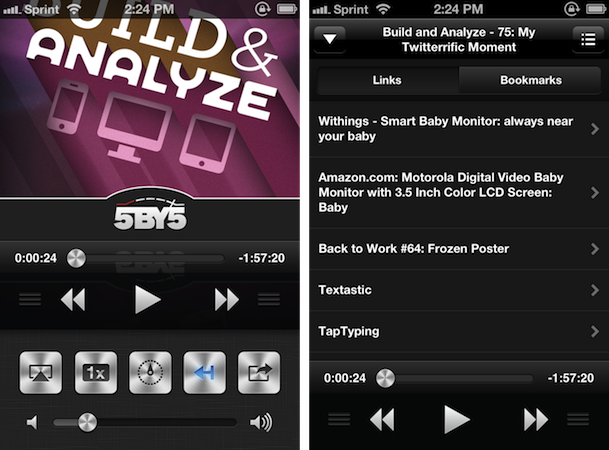 Instacast’s new player controls are well done. The volume slider, AirPlay, playback speed, a sleep timer, and sharing options accompany continuous playback in a mock multitasking tray by sliding up the player like the lock screen camera. Each control is sized just right and make for easy-to-tap touch targets. Web links from show notes available for the episode can be found by tapping on the album artwork, and you can create bookmarks to mark important or must-listen-to points in the podcast. Sharing pauses the podcast, but it’s done so Instacast can grab your current position in the episode. You can tweet a link or copy a URL, with the resulting link taking you to a web interface where you can listen to the discussed segment of the show.

The web interface for sharing and discussing podcasts via Instacast is really good. An HTML5 compatible audio player avoids Flash, and there are links that let you continue the podcast in Instacast or visit the original show page. Twitter is used as a main feedback medium, but comments are nicely included alongside the player (which works just as well in Safari on iOS).

Syncing over iCloud is much improved with Instacast 2.0. It’s fast, so far flawless, and has certainly made transitioning to Instacast HD on the iPad easier when I have downtime. Perhaps even bigger architectural improvements can be attributed to Multi-Format podcasts and Podlove Deep Linking. Multi-Format podcasts work similarly to RSS feeds — if you’ve ever clicked on the RSS button in Safari and have gotten an option to select one of a few feeds in a pop-up menu, it works the same way with podcasts. Vemedio provides the best use case: choosing between quality streams. Deep linking, when supported, allows for specific episode segments to be played back (there’s both a start and a stop position). Podcasters can check out Podlove for more information on these specifications. 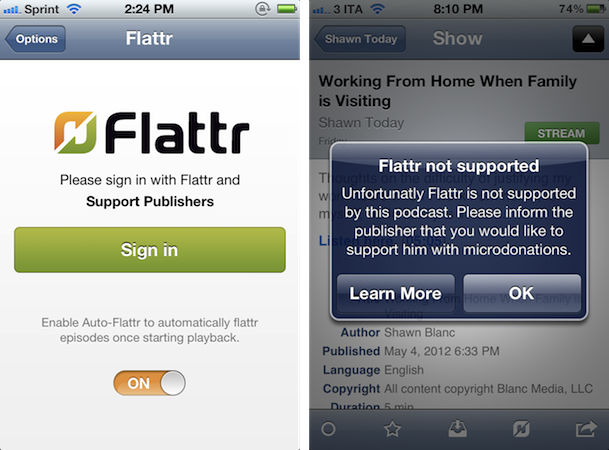 Flattr has been a big point of focus in Instacast and Instacast HD recently, and it’s hard to not to love anything that potentially puts some extra change into the pocket of podcasters you love. Flattr was around before Readability, but it works on the same principles. A pool of money is put into Flattr, and each time you click a Flattr button on a website or tap on a Flattr button in an app, a percentage of that is given to the website or podcast at the end of the month. Unclaimed clicks are put into a pending state and reserved until the owner claims it. In this context, it might be of concern that money in Flattr won’t get to the podcasts you want to donate or contribute to. What alleviates some of this is that Instacast informs you of the podcasters who are regularly accepting payments from Flattr — rest assured you will be notified that the podcaster isn’t collecting money if you tap the Flattr button. The precautionary alert that pops up is an excellent measure, providing users with a sort of safety net Readability doesn’t have.

Edit 4:56 pm: Niels in the comments below clarifies how unclaimed clicks work in Flattr. If you give clicks to unclaimed things, the clicks will be set aside for later until those clicks are claimed. Once claimed, the claimant will receive an amount based on their total clicks vs. the overall clicks out of the current month. Niels explains this very well below. In summary, Flattr itself doesn’t want to hold on to money and instead distributes it based on who’s actually claiming stuff at the time.

Instacast has reduced the entry fee of their app from $1.99 to $0.99, giving everybody access to base features for just a dollar. An additional $1.99 in-app purchase adds per-subscription settings, the ability to add playlists, bookmark features, and true push-notifications for new episodes via an in-app purchase. The IAP (dubbed Instacast Pro) allows the developer to maintain Instacast, its web service, and the backend required to maintain push-notifications and the podcast directory. 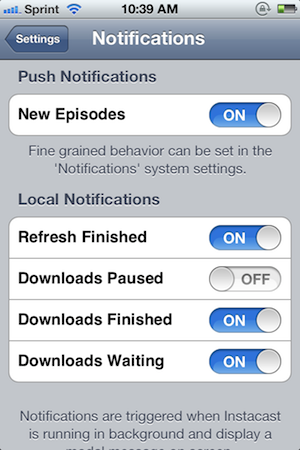 Lots of negativity has cropped up around the IAP model. From what I can tell, asides from sorting in the pre-created smart playlists, no features have been removed or supplanted by the IAP (you’re not paying for an old feature again) — you’re only adding additional functionality. Push notifications in particular seem to be a hot topic of discussion. Push notifications were first added to Instacast HD on the iPad — local notifications on the iPhone prompted users about podcast status. Instacast 1.x on the iPhone simply notified users if new episodes were available via a notification if they left the app while it was refreshing subscriptions in the background. I haven’t had post-upgrade problems during my review, but I know the developer is adamant on solving any issues (which seem to be with older iPhones from what I saw on Twitter).

I get asked a lot (especially in comments) about why I use Instacast over other podcatchers. Apple’s podcast solution, which I used before Instacast, was sorely lacking in every capacity. Apple’s podcast player is good for playing a podcast or two, but is empty of any management features. At the time, I did not like managing podcasts through iTunes or downloading episodes from the iTunes Store. Competitors challenge Instacast on price and features, but none of them have an interface I’m happy with. Many readers have me asked me to review other podcatchers — I’ve tooled with them — but Instacast has always been the app that I’m really happy with. I’m not saying other podcatchers are bad, but I am saying that Instacast has a great interface and provides the quickest path to streaming podcasts for me. The same arguments apply to my choice of RSS reader and Twitter client. Instacast’s developer has been the most vocal about pushing podcast standards recently, and I’m behind both the push towards better podcasts and the openness on Vemedio’s blog. 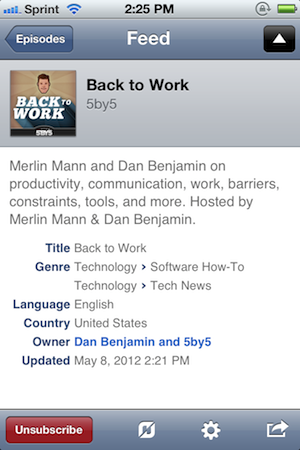 Instacast 2.0 is a solid update that provides a solid foundation for listening to podcasts exactly the way you want to. I couldn’t be happier with my 5by5 playlist for example: playing After Darks immediately after each show is made much easier thanks to per-subscription settings and improved continuous playback. Ninety-nine cents is an incredibly low entry price to get most of what Instacast has to offer, while an additional $1.99 adds pro features that may segment the user base, but give every customer the option of choosing whether or not they need extra features (a user who streams three or four podcasts irregularly may never need to use playlists). Instacast 2.0 is available in the App Store, while pro features can be purchased in the settings.