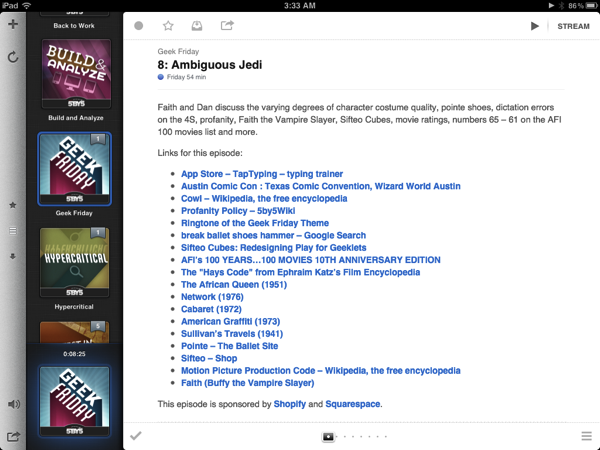 I remember when I first reviewed Instacast for the iPhone back in March, declaring it the Twitter of Podcast apps. While possibly dramatized, what Instacast has done for mobile podcasts is what Loren Britcher did for Twitter apps. The interface, lightweight and smooth, capitalizing on common sense gestures and thoughtful design elements, quickly made Instacast one of my favorite iPhone apps. Instacast is the only non-Apple app that has a spot on my iPhone’s dock. An intelligent conversation, a good laugh, and Geek Friday are always just a tap away.

Instacast got smarter. Sure there were times when enhanced podcasts didn’t work or a wonky update caused weird crashes, but they were fixed and plenty of new features were added. Continuous playback always kept a friendly voice on the loudspeaker. Later, iCloud syncing was added in preparation for future updates. Future updates that of course would finally see Instacast taking on bigger endeavors.

There were lots of days on the couch when I thought about Instacast coming to the iPad. Until recently of course, I hadn’t known what to expect before I was invited to take a look at the first beta. I imagined that Instacast, containing a library of podcasts, would take on a form similar to iTunes. I imagined the interface as a grid, where you would easily scroll through podcast cover-art and see badges revealing the number of unplayed episodes. How silly!

Martin Hering first hinted at the design in September, and I later had the privilege of revealing more of the interface near the end of October. An excited Joshua Schnell and Myke Hurley have also been eager to share the new interface, giving it due praise on the App Orchard and at Macgasm. The hype around Instacast HD for the iPad has been astounding, and for good reason. Instacast HD is incredible.

Instacast HD is the Twitter of podcatchers. Remember how fresh and innovative Twitter’s interface felt when you first used it on the iPad? Instacast HD manages to capture that same feeling when you first open the app, especially if you’re already using Instacast sync with your iPhone. Podcasts are immediately slurped into the reimagined interface. Redesigned to feel native, custom, and appropriate for the iPad’s 10” display, these screenshots only tell half the story.

A waterfall of your subscribed podcasts highlights recognizable cover-art in Instacast HD, giving all of your favorite shows a central location from which they can be accessed at any time. Numbered bookmarks indicate unplayed and cached statuses, as blue highlights indicate the currently selected subscription. I’m definitely a big fan of the background that’s not dissimilar from the linen patterns found in other great iPad apps like Reeder and Instapaper. 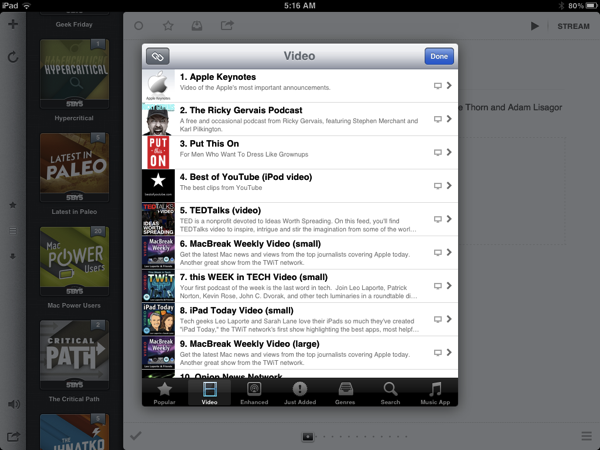 Of course the first unveiled element of Instacast HD lines the left side. The main toolbar presents the subscription tools needed to filter episodes and rearrange the subscription list. Always present is a universal volume control for quickly quieting loud guests. You can also find the the podcast directory via the add button at the top of the toolbar. The frosty gradient is reminiscent of Lion’s Aqua.

Episode show notes are really well done. Flicking through a long list of show notes is responsive and bouncy. Swiping left or right brings newer or older episodes into view. Tapping on a link slides a friendly browser sheet over the show notes, which can fill the display at your request. It’s so much easier to follow along with your favorite hosts and the treasure trove of reference materials they leave to explore in Instacast HD. If a podcast contains chapters, tapping on a chapter title will start an episode at that time. 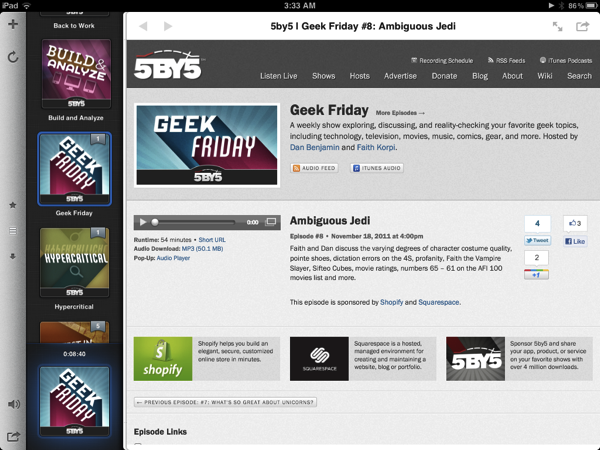 The browser sheet is fantastic. Introducing itself by sliding in from the right before quickly bouncing into place, the attention to detail is outstanding. While the option is given to open the current webpage in Safari, I rarely feel the need to. The browser is without excess, with the white titlebar being both complimentary of the show notes and simply undistracting. There is no close button. The browser sheet is dismissed by simply swiping it off the display.

Episode show notes are crowned with episode actions, enabling the ability to quickly mark episodes as read or as a favorite. Episodes can be individually cached for offline playback, and of course sharing options allow for safe archival via email or a service such as Read It Later. Users of Reeder or Instacast for the iPhone will be instantly familiar with Instacast HD. Don’t forget about the stream button at the top right corner, which gracefully doesn’t look like much of a button at all. 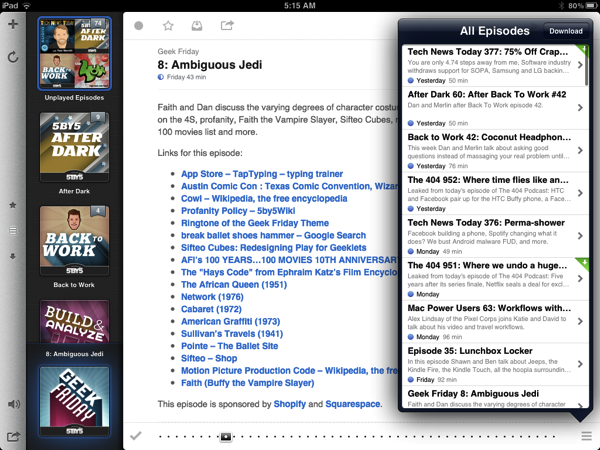 The episode scrubber below the notes, more useful when browsing all unplayed episodes, quickly helps one navigate through a sea of unplayed podcasts. To help mitigate such procrastination, a popover containing an episode number, title, date, and excerpt, promptly floats just above your finger when utilized. A checkmark will mark all episodes played in the selected subscription, while a list button presents podcasts in a format familiar to the iPhone interface. The episode list popover is useful when wanting to download particular episodes, marking others as unplayed, and overall micromanaging the selected subscription. While the list appears static, you can swipe left and right to quickly apply read and starred statuses.

Our subscription list has plenty of tricks that can be uncovered with only a few taps. Flicking up and down of course allows you to browse through various podcasts, but it’s only when you tap and hold on one until you can realize that you can rearrange and remove them. Rearranging podcasts is fine until you drag artwork towards the edge of the display, where Instacast HD shows one of its less mesmerizing sides as dragging podcasts becomes stiff and clunky. Tapping away does not dismiss the podcast-dance. Rather, you’re left tapping a checkmark in the toolbar. Tapping that checkmark, however, also jarringly realigns the subscription list as it reverts back to the position you first started at. You’ll sometimes notice slight lag as artwork loads if you’re quickly flicking through the subscription list. 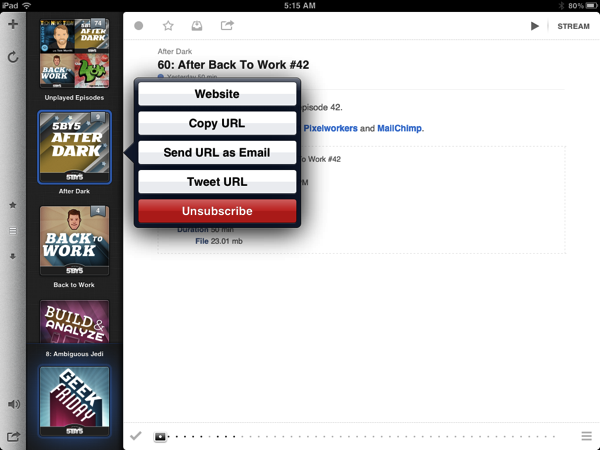 With a podcast selected (indicated by a blue highlight), tapping or sliding your finger across the artwork will present a popover that will take you to the podcast’s website, give you the option to copy its URL, and allow you to unsubscribe, bypassing the above method of organization. I imagine this particular shortcut will be one not immediately found, but it’s helpful nonetheless. 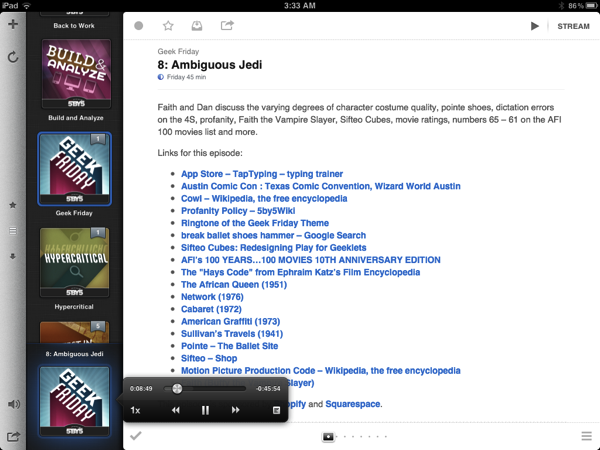 When streaming or playing a cached episode, a “Now Playing” area pops into view at the bottom of the subscription list. Just above the artwork, various information about the episode such as the show title and its playing status shift vertically into view like a news ticker. To access various playback controls such as playback speed or to simply pause the podcast, you simply tap on this area to bring up a custom popover. The integrated scrubber can be easily fine-tuned by simply sliding your finger farther away from the scrubber, helping you navigate through an episode if you want to skip to a certain segment. Aside from otherwise standard playback controls, a list button brings the current episode’s show notes into view if you’ve been browsing elsewhere. Tapping and holding on the “Now Playing” area will stop the episode and its stream via a popover.

Starred and cached episodes can be accessed by simply tapping on the star or down-arrow icons in the toolbar, filtering your subscription list into items you may find more important. A refresh button will make available any new episodes, while you will find an options button at the bottom of the toolbar which contains shortcuts to iCloud sync and settings (a redirect to the Settings app). Contrary to rearranging podcasts, the animations here are great. 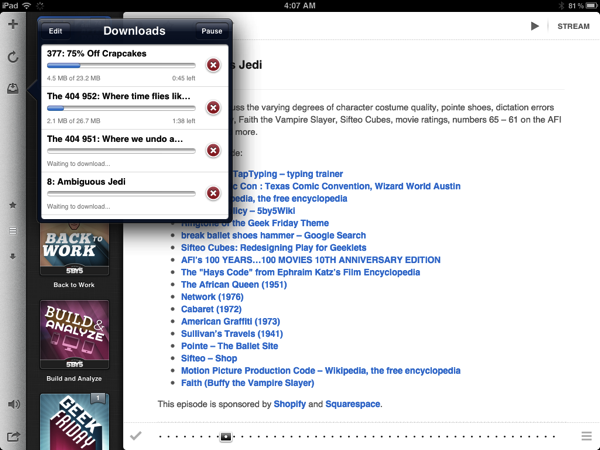 When downloading episodes, a download manager appears in the toolbar underneath the refresh button. The download manager gives you the ability to rearrange podcasts to give them priority, pause all downloads, and individually cull podcasts from the list. It’s an excellent feature, and one that’s bound to make frequent flyers very happy. 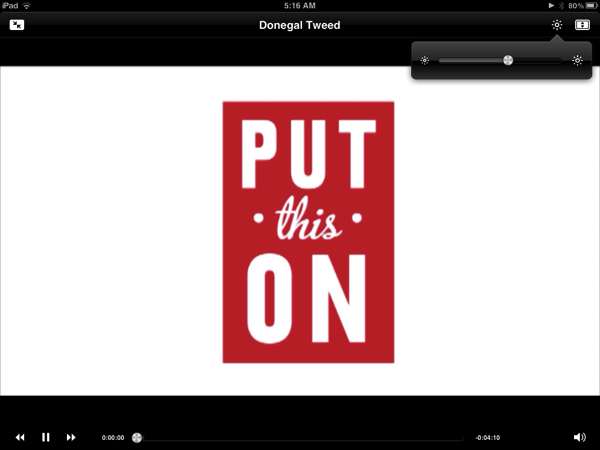 Where Instacast HD really shines is with the playback of video podcasts. Show notes and the toolbar fly out as video maximizes into view, reminding me of western doors swinging open. Presented with white-on-black video controls, the custom interface elements simply disappear as the video plays. Brightness and volume controls contain their own custom popovers, featuring horizontal sliders so that fingerprints don’t mar the center of the display where video plays. By minimizing a video podcast while playing, the audio seamlessly continues in the background as you read show notes, although it will occasionally stutter upon resuming video playback. Tapping on the stream button or the album artwork plays and resumes video, with actions being the same otherwise above the show notes. If you watch lots of video podcasts, Instacast HD’s experience is like no other.

Beyond the interface, added convenience has found its way into notifications. Anytime an episode is updated on the server, you’ll get a push notification as soon as its available. If you just can’t miss an episode of Build & Analyze or Hypercritical, Instacast HD lets you know as soon as they’re posted. Swiping the notification will of course take you directly to the show notes so you can begin playback.

Instacast HD is everything you love about Instacast, delivered in high definition on your iPad or iPad 2. Requiring iOS 5, it’s quite simply the best podcatcher available for iOS. Nothing compares to the astonishing interface, the simplicity, or the even the video experience Instacast HD is able to provide. It’s perfect for the couch, where you’re likely to be reading through your RSS feeds or watching your favorite Revision3 podcast. With the inclusion of iCloud sync to help keep played statuses and subscriptions in sync between your iOS devices, you really can have the best of both worlds.

While Instacast on the iPhone provides much needed mobility and convenience, there’s just something about having a good podcast app on the iPad that makes it feel complete. With iTunes and native iOS apps being poor avenues for podcast playback, it feels appropriate that an app like Instacast fill this void with something spectacular. Given how well Instacast HD interfaces with your fingers, I’d say it will knock your socks off.

While managing subscriptions can sometimes feels like a chore, the overall experience feels liquid and smooth just like a good iOS app should. Playback controls are smart and well done, with popovers being abundant but smartly hidden. There are lots of little details you’ll begin to notice and appreciate, with much polish making Instacast HD one of a kind in its category. Put simply, if you listen to podcasts on the iPad, Instacast HD should be the only podcatcher to consider. At least, I’m that crazy about it.