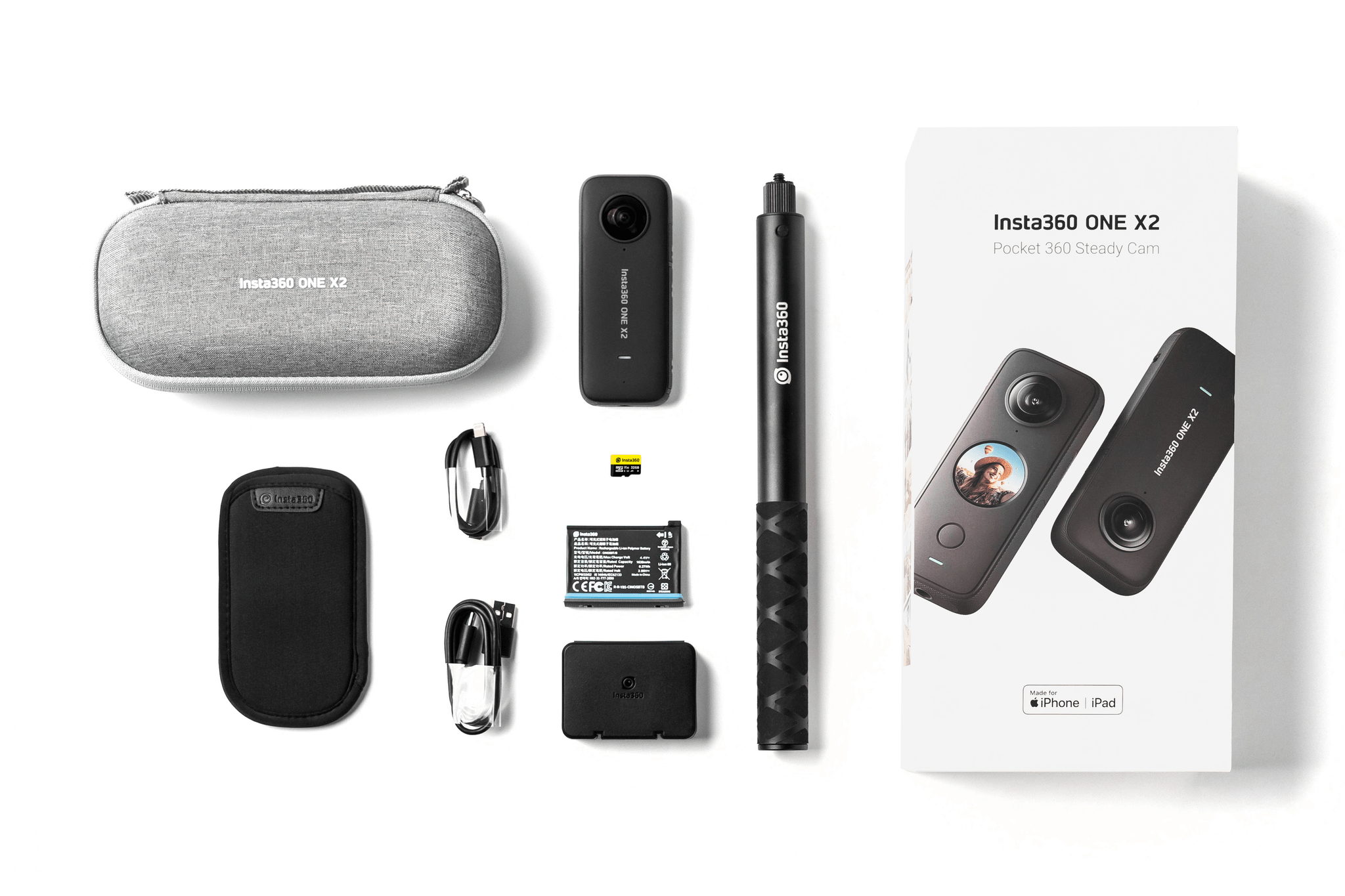 Starting today, Insta360 is offering an exclusive bundle of the Insta360 ONE X2 camera and an assortment of accessories through Apple’s online store for $479.99.

I’ve been intrigued by Insta360’s action cameras since coming across them during CES in 2020. I bought a DJI Osmo Pocket when it launched at the end of 2018, which sold me on the notion of a tiny, versatile camera that integrates with the iPhone. So, when Insta360 offered to send me the Apple Store bundle to try, I was curious to see what it can do and what a 360-degree perspective would add to the mix. I’ve only had the ONE X2 for a few days during a brutal Chicago cold snap, so my use of the camera has been limited. Still, the excellent app integration has made getting started a breeze, so I wanted to share my first impressions.

The Insta360 ONE X2 bundle being sold by Apple is a great starter package that includes the ONE X2 camera, an Invisible Selfie Stick, an extra battery and case to carry it, a 32 GB MicroSD card and SD card adapter, two charging cables (USB-A to USB-C and USB-C to Lightning), a carrying case, and a soft pouch. Separately, the camera retails for $429.99, and with the accessories, the entire package would cost around $511 based on the prices listed on Insta360’s website. However, through Apple’s online store, you can purchase the kit for $479.99, saving some money and getting everything you’ll need to get started. 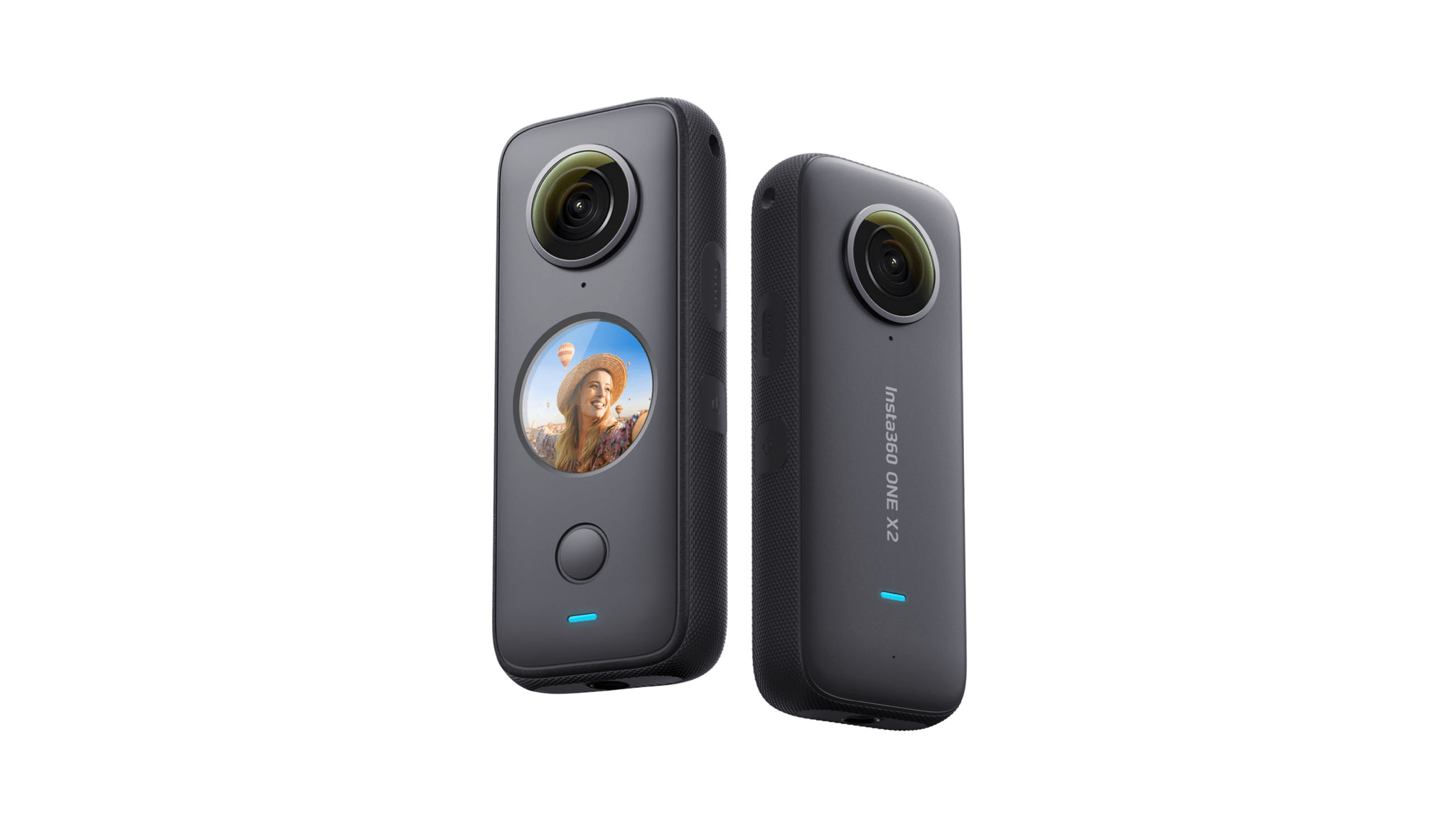 The ONE X2 is compact, the build quality is excellent. Source: Insta360.

Two things have impressed me about the Insta360 ONE X2: the flexibility of the camera hardware and its integration with the iPhone, iPad, Apple Watch, Mac, and AirPods. The ONE X2 is an incredibly versatile camera. With dual fisheye lenses, it can capture 360-degree video at 5.7K. That alone opens up a lot of creative possibilities when paired with Insta360’s apps, which I’ll get to shortly. However, what I also appreciate about the ONE X2 is that it’s not limited to 360-degree video. You can also take 150-degree wide-angle video and photos.

The camera has an f/2.0 aperture, an ISO range of 100-3200, can shoot video in multiple resolutions and frame rates, captures still photos in JPEG or RAW, and video in MP4 or INSV, a proprietary 360-degree format. Video and photos can be shot in HDR, and photos also support a burst mode, interval shots, and special modes for nighttime photography, PureShot, which punches up an image’s color, and a special panoramic mode.

Video modes include time-lapse, with which a lot of people are probably already familiar, and Steady Cam, which removes hand-shake and other motion from video using the camera’s gyroscopes. After filming while I walked through a local park in deep snow, I reviewed the ONE X2’s footage and was impressed at how steady it was. The camera also supports special Time Shift and Bullet Time modes, which I haven’t tried yet.

The build quality of the ONE X2 is excellent. Everything about the camera feels solid. The camera is waterproof to 10 meters too. I took advantage of the waterproofing by trudging through a snowstorm, but you can also take it underwater and in other wet environments.

The camera fits comfortably into the palm of your hand, which makes it easy to operate, but it includes a standard tripod mount on the bottom for use with the Invisible Selfie Stick and other accessories. The selfie stick is ‘invisible’ because when you use it, the ONE X2’s software edits it out of the frame. That makes it possible to take shots from the end of the selfie stick that look as though they were shot by another person. It’s a neat trick that opens up other interesting creative possibilities.

The ONE X2 bundle also comes with a spare battery, which is a nice addition for when you’re out shooting video for long periods of time. I haven’t used the ONE X2 long enough to have a good sense of how long it can be used in real-world situations before the battery is drained, but having an extra is always nice.

The bundle comes with a 32 GB microSD card, too, which I was surprised to learn isn’t included if you buy the camera by itself. 32 GB is good enough for getting started, but it fills up relatively fast, so unless you want to spend time exporting photos and video regularly, which will also take a toll on the battery of the camera and your iPhone, I’d suggest grabbing a bigger microSD card, which is fairly inexpensive on Amazon. The bundle also comes with a carrying case that I haven’t tried yet because it was unavailable when the ONE X2 was sent to me.

I took the ONE X2, perched on the Invisible Selfie Stick, to Graue Mill, a local park to walk by the old mill and see how much of Salt Creek had frozen over in the single-digit temperatures last weekend. Even rushed because I was freezing cold, the ONE X2 was easy to operate with its big, bright, circular touchscreen to preview my shots. Swiping from the top, bottom, left, and right edges of the screen reveal various settings and modes. There are also on-screen controls that can be tapped to do things like switch between camera angles, recording resolutions, and camera previews. Alternatively, you can use an iPhone or iPad with the Insta360 app to connect to the camera over a local WiFi connection, providing a bigger view of your shot and the ability to change the same settings.

It’s nice to have the option to use the camera or an iPhone as the viewfinder. There’s a little lag when operating the camera over a WiFi connection from an iPhone, but that’s something I’ve experienced with every similar camera remote control solution, and it didn’t slow me down appreciably. I found myself switching between the two at various times depending on what I was doing. With the ONE X2 at the end of the selfie stick, the iPhone is perfect for making sure you’ve got the framing you want, but the camera is just easy to operate as a standalone device.

The other standout feature of the ONE X2 is Insta360’s focus on its apps. There’s an iOS app called Insta360 as well as a watchOS app and a Mac app that was recently updated to support the M1 Macs. I already covered that the iOS app can act as a remote control for the camera, but it does far more. The first tab, called Explore, is an inspiration hub full of photos and videos that were taken by other users that is reminiscent of Instagram but which also includes tutorials on different kinds of videos you can take with the ONE X2 and contests.

The editor includes a one-tap AI button that analyzes your 360-degree footage and suggests clips that focus on different parts of the scene you recorded. I only tried the feature a couple of times, but in both instances, it extracted clips that I liked and would share with no further editing.

There’s also a Stories tab, which is another editing tab that combines tutorials that help you get the most out of what the ONE X2 can do. Each tutorial includes video examples of how to create the shot as well as a theme to get you started. Stories include a timeline-based editor, to which you can add clips, transitions, and music, building a short film that combines a mixture of several elements.

The iOS app has a couple of downsides too. The first is that I don’t like that exported images and video include a ‘Shot on Insta360’ watermark by default. I understand that some people might want to use this to explain to others how they created a video or photo, but I was disappointed that Insta360 decided to insert what is essentially an ad for its camera into my photos and videos by default. Fortunately, the watermark can be turned off in Settings.

The Insta360 app sends a lot of notifications, too, at least in the first few days I tried it. Like the default watermark, those can be turned off, but I’d prefer if they were dialed back a bit to begin with.

The Insta360 iOS app includes a robust Apple Watch app too. Your Watch connects to the ONE X2 over WiFi, just like the iOS app. The Watch app doesn’t include a preview of the shot you’re taking, but all the controls for starting and stopping recording and capturing still photos and video are available, as are buttons to change resolutions, modes, and other parameters. When juggling an iPhone and the ONE X2 is too much, the Insta360 Apple Watch app is an excellent option. 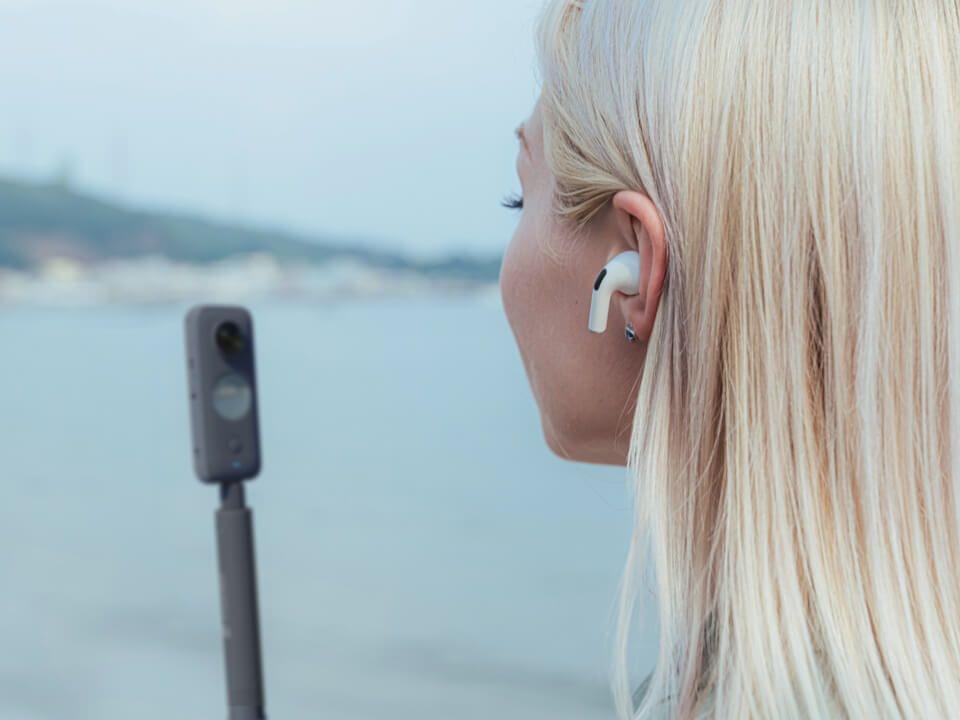 The ONE X2 works with AirPods for recording audio and controlling the camera. Source: Insta360.

The ONE X2 works with your AirPods, allowing you to use them to record audio and control the camera with your voice. I haven’t had a chance to try the AirPods integration yet, but I’m particularly interested in trying the voice control for hands-free operation.

Finally, there’s a Mac app called Insta360 Studio 2021. The app works with M1 and Intel-based Macs and includes a suite of tools for previewing, trimming, adding transitions, and making other basic edits to your video. If you want to go further with the edits, Insta360’s Mac app lets you export to Final Cut Pro X or Adobe Premier Pro. My tests of the Mac app were very limited, but I had no trouble dragging in a 6 GB 360 video file and moving around the timeline on the M1 Mac mini I’ve been testing. 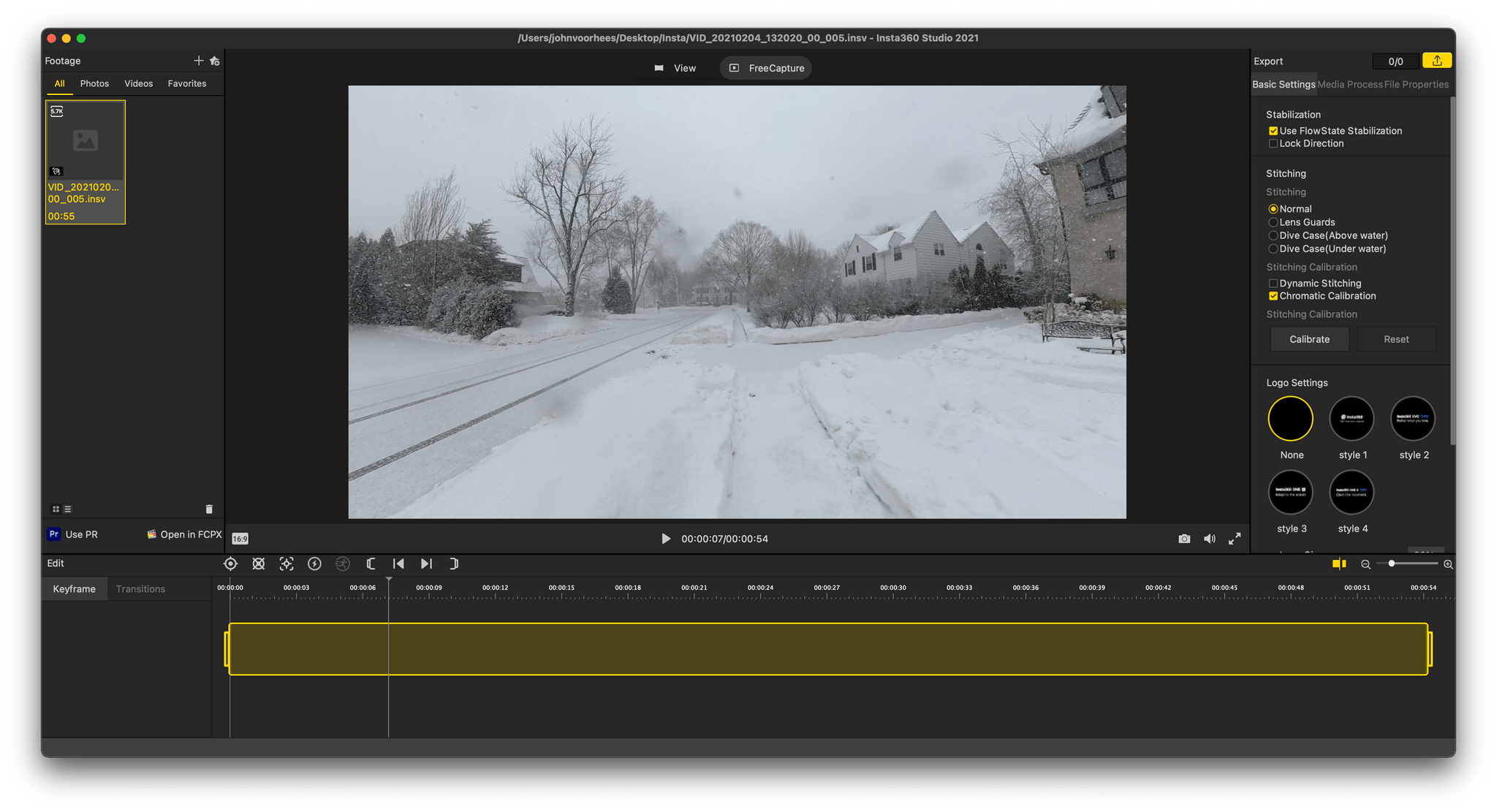 In addition to everything I’ve already mentioned, the ONE X2 can:

That’s a lot to absorb, and in the few days I’ve been testing the ONE X2, I’ve barely scratched the surface. At the same time, though, the long list of features and options don’t feel overwhelming. Between the tutorials, in-app help, and well-designed apps, there are plenty of ways to pick up the details as you experiment with the ONE X2. I’ve got a long way to go, but with time and a little planning, I’m sure I could create some fun videos.

If you’re looking for a new direction to push your skills as a photographer, the ONE X2 is worth a look. The camera is a good choice for anyone looking to create something fun and novel that isn’t possible with a mobile phone. The 360-degree perspective means you can simply turn the ONE X2 on, shoot for a while and then use Insta360’s tools to guide you through creating something unique. That makes the Insta360 ONE X2 a pleasure to use and a camera that I’m keen to get out and work with some more.