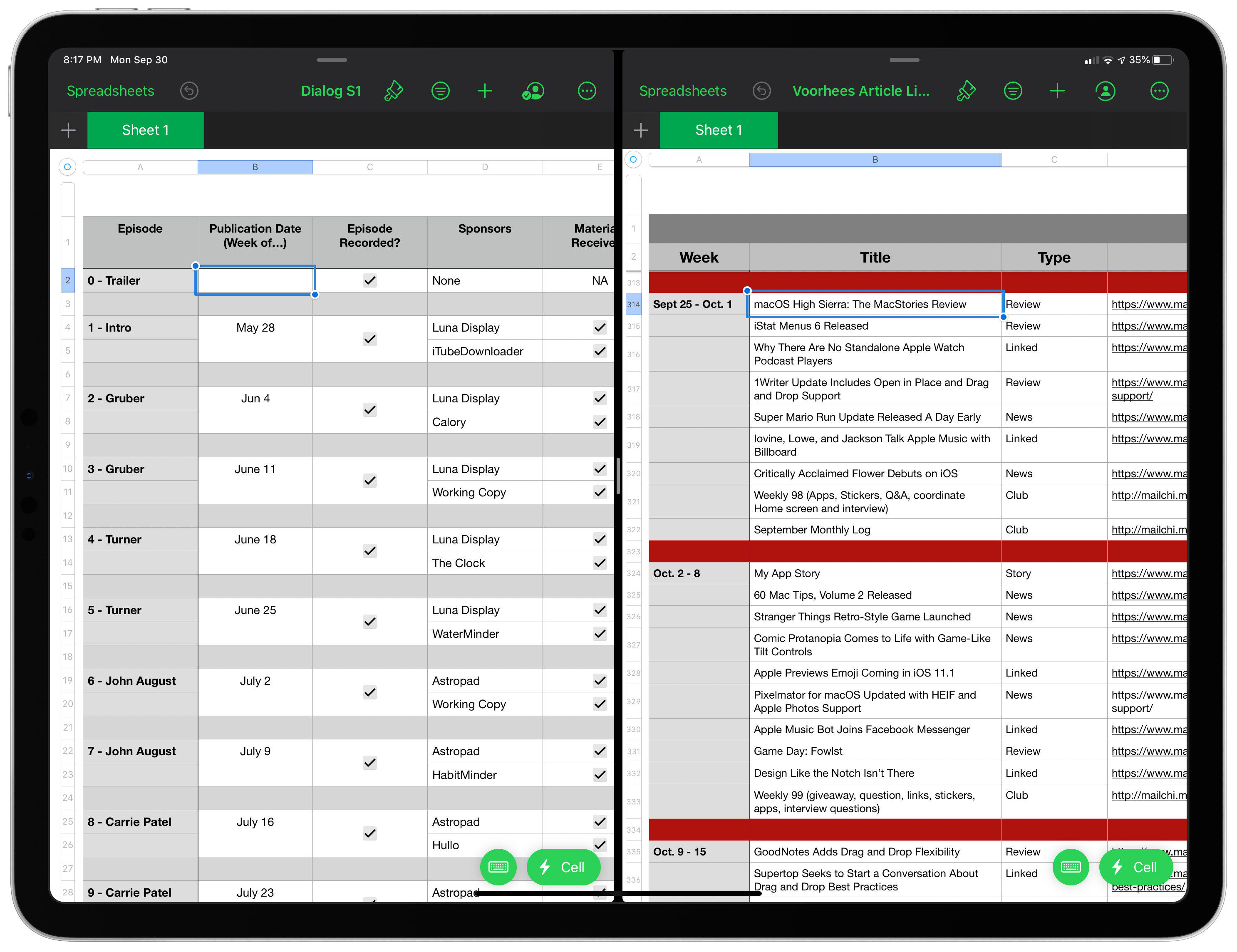 Apple has added several iOS and iPadOS 13 features to its full iWork suite. I’ve spent some time playing with Pages, Numbers, and Keynote, and they are an excellent showcase of some of the highlights of iOS and iPadOS 13 that will change the way many people use each of them.

The feature that should be most useful to the greatest number of people is the new multiwindowing support on the iPad. All three apps already supported Split View, but now you can open two instances of Pages, Numbers, or Keynote side-by-side.

I often find myself borrowing elements from one spreadsheet to build a new one or reviewing a reference document in Pages or Keynote while editing another. With multiwindow support that just got a lot easier. Now you can drag tables, page elements, and slides from one instance of an iWork app to another or use one as a reference for the other.

It’s worth noting that unlike the recent multiwindow support added to GoodNotes, the iWork apps do not allow you to open the same document in two windows, which is too bad. If you’re working in a long Pages document, sprawling spreadsheet, or an endless stack of Keynote slides, it would be handy to view two sections of the same document at once. I’d love to see Apple add that in a subsequent update. 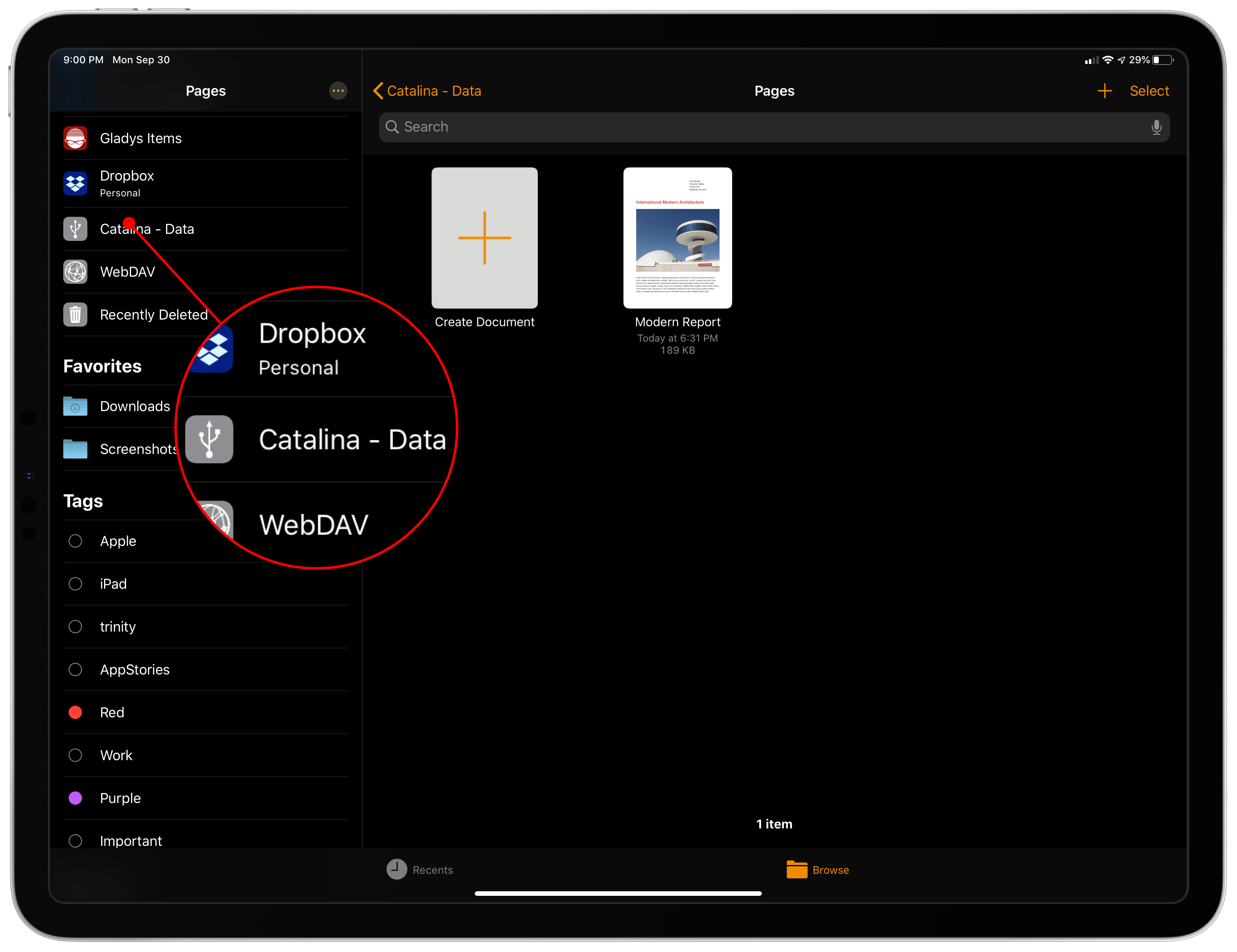 Saving a Pages document to my external ‘Catalina’ SSD.

All three apps also support external storage now too. When you plug in a drive, it shows up as a file provider alongside iCloud Drive and any others available on your iOS device. iWork apps save to app-specific folders in iCloud Drive, but you can drag them onto an external drive or create them as new documents by backing out of the app’s iCloud Drive folder and choosing your external drive instead. For anyone who has a desktop Mac at work and an iPad at home, this is a handy way to take files back and forth if you don’t use a cloud service. It’s also an excellent way to share large files with someone. 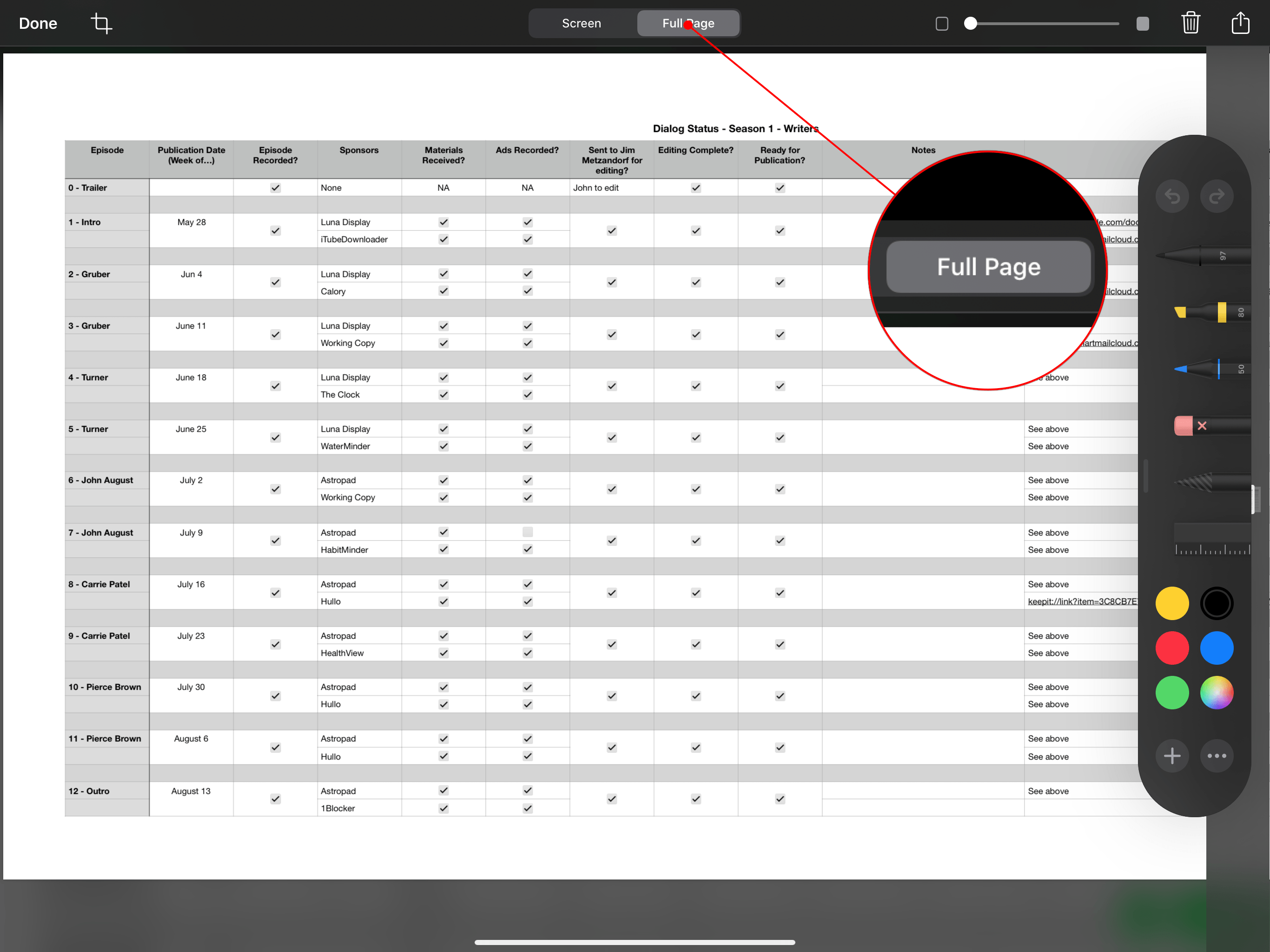 Capturing a spreadsheet that didn’t fit within the bounds of my iPad screen with Numbers’ new Full Page screenshot option.

Pages, Numbers, and Keynote also support full document screenshots, a feature that some readers may have come across in Safari already. When you take a screenshot and tap on the thumbnail created to open markup mode, there are Screen and Full Page buttons at the top of the view. Tapping on Full Page creates a PDF version of your entire document regardless of whether it extends beyond the visible bounds of your screen.

The feature is terrific for marking up drafts or capturing a spreadsheet littered with tables and graphs that can’t be crammed into one view. It even works when two windows for the same app are open side-by-side. However, I immediately wondered which window of the app would be captured. It turns out the first one you open is the one that iPadOS will make a full-page version of regardless of its position on the screen. That isn’t ideal if you’ve had a pair of windows set up for a while and don’t recall which you opened first. 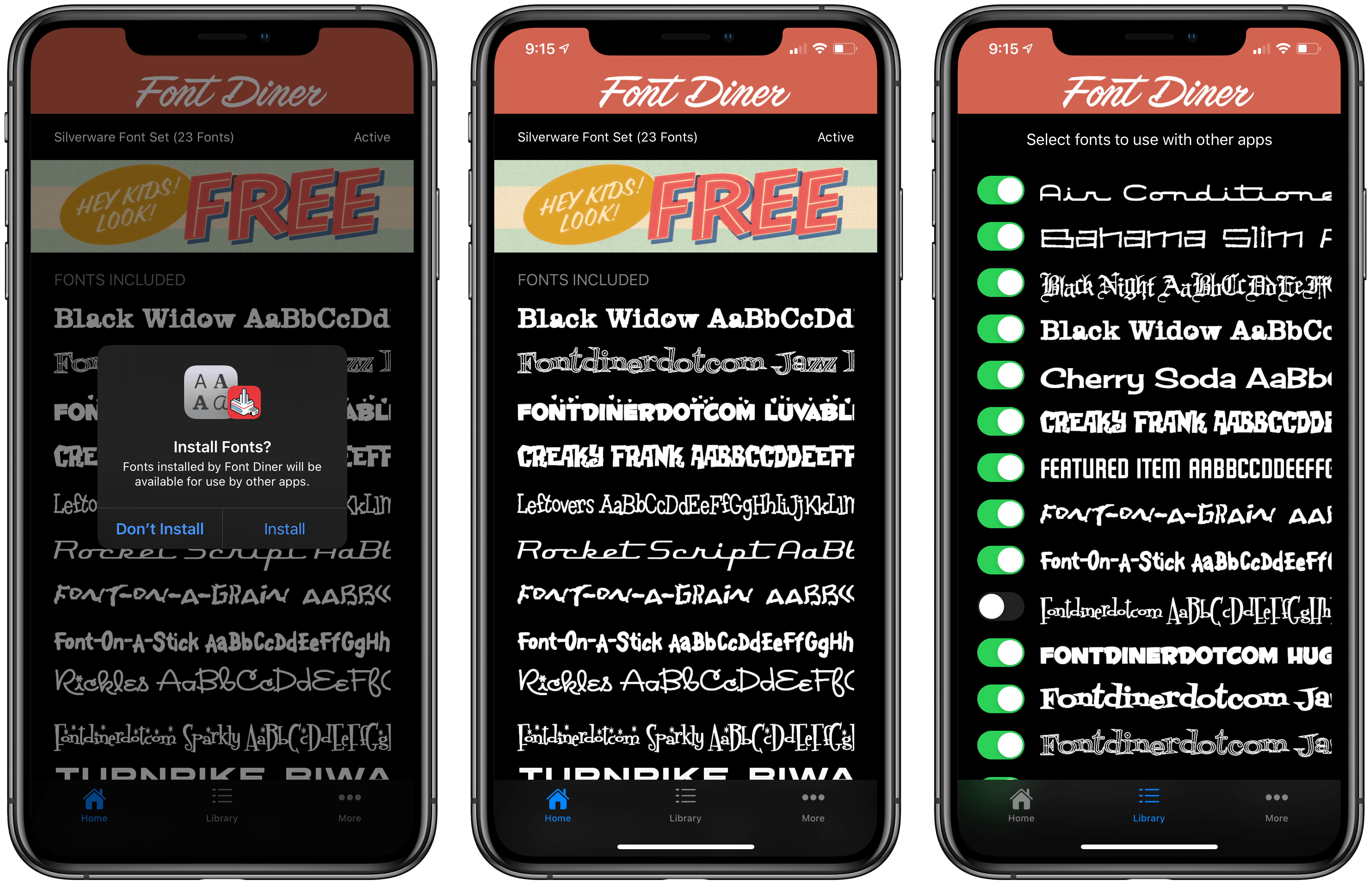 Font Diner is one of the first font apps on the App Store to offer fonts to other apps.

I downloaded Font Diner from the App Store, tapped one button to activate its fonts, and all of them were available immediately to use in the iWork apps. However, Font Diner has toggles for each of its fonts, so you can turn off those you don’t want to use. The idea of downloading and managing fonts the same way I do apps is enticing, and I hope more apps add support for it. For now, however, you won’t find third-party fonts in apps like Microsoft Word or Google Docs. 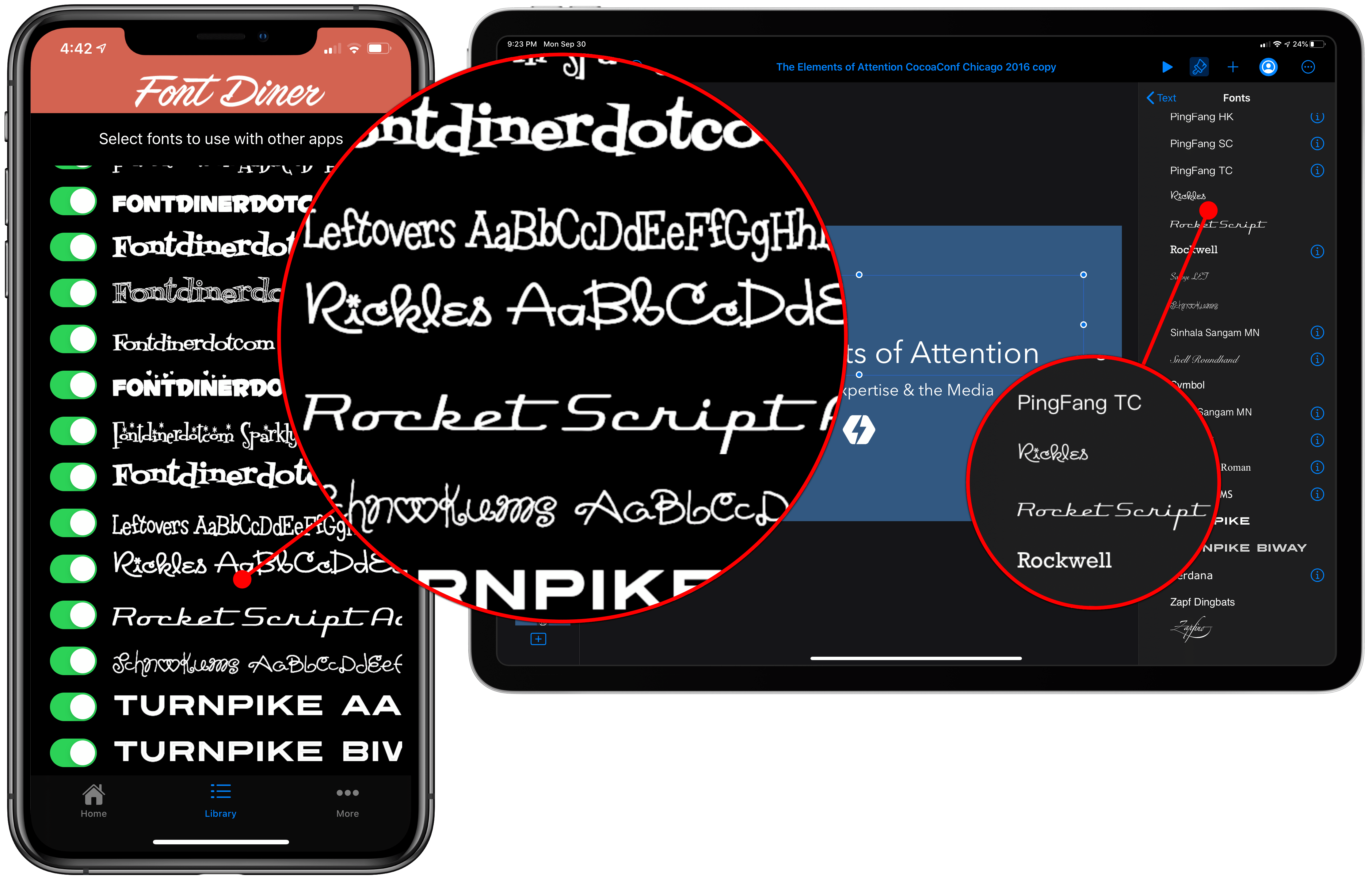 Rickles and RocketScript are just two of the fonts I installed with Font Diner that are available in all three iWork apps.

The updates include several other changes too. All three support the latest iOS and iPadOS text editing gestures, support for HEVC movies, and selecting multiple objects using the Shift and Command keys on an external keyboard, a feature that is not available to third-party developers unfortunately.

Accessibility has been enhanced in each of the apps too. Users can listen to an audio representation of charts and add accessibility descriptions to audio, video, and drawings. There’s also better accessibility support of exported PDFs.

The updates to the iWork suite make them an excellent way to try some of the latest iOS and iPadOS 13 features. I know I’ll begin using the option to have two Numbers spreadsheets open at the same time as soon as I start building the 2020 versions of some of the tracking spreadsheets I use for MacStories. I just wish I could drag a tab of a spreadsheet to open it in another window of the same document for reference purposes too.

Pages, Numbers, and Keynote are available as free updates on the App Store.