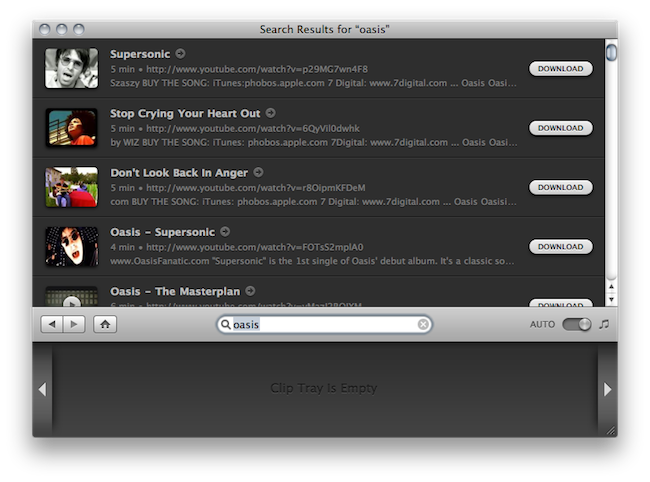 I know a lot of people who don’t listen to music through their iTunes library, or a Music folder saved somewhere on their computers. Every time they want to listen to their favorite band, they fire up Youtube. This behavior is particularly common among my friends, who find it “easier” to search for a video rather than organizing a media library. Maybe they just don’t want to buy songs and don’t feel like downloading pirated copies, either. I don’t really know why they keep doing this.

There’s also another reason why people listen to music through Youtube: rare footage and live performances. iTunes offers a large selection of official live performances from thousands of artists, yet Youtube manages to keep an impressive archive of unofficial, yet high quality, footage from millions of bands. That 1994 Oasis concert at New York?  Go find it on iTunes if you can. Sometimes the quality isn’t exactly record-like, but the average user (and fan) doesn’t care.

That’s where an app like Grappler for Mac by The Little App Factory comes in handy: it’s a beautiful and simple utility that helps you save music and videos from the web, especially Youtube.com. It’s deeply integrated with iTunes, so you can have the best of both worlds with an organized library that relies upon a huge web archive.

As Little App Factory’s tradition, Grappler looks great. it’s got a sexy and stylish dark interface, gorgeous thumbnail previews for music and videos and a few nice buttons here and there. It’s polished and, overall, doesn’t get in the way as many other similar applications that want you to be able to save media from the web. As you fire up the app for the first time, you’re reminded the demo version allows for 25 free downloads before going into a locked state that forces you to buy the full version at $19.95. Fair enough. 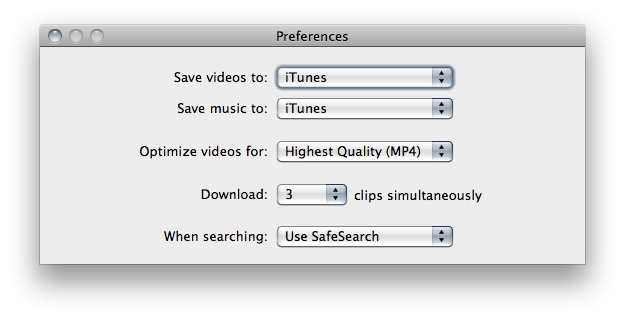 In the main screen, you’re presented a search bar with an empty “clip tray” right below it. The tray is where your downloads will appear as you browse to a website containing media Grappler can download. In the preferences of the app, you can choose to automatically save music and videos to iTunes (as long as in iTunes you’ve checked “Keep iTunes Media folder organized” and “Copy files to iTunes Media folder when adding to library”), optimize videos for MP4 quality, iOS devices and PS3 / Xbox 360. I really dig the possibility to set a default quality before downloading stuff, without having to convert it later. You can set the app to download up to 10 files simultaneously, too. 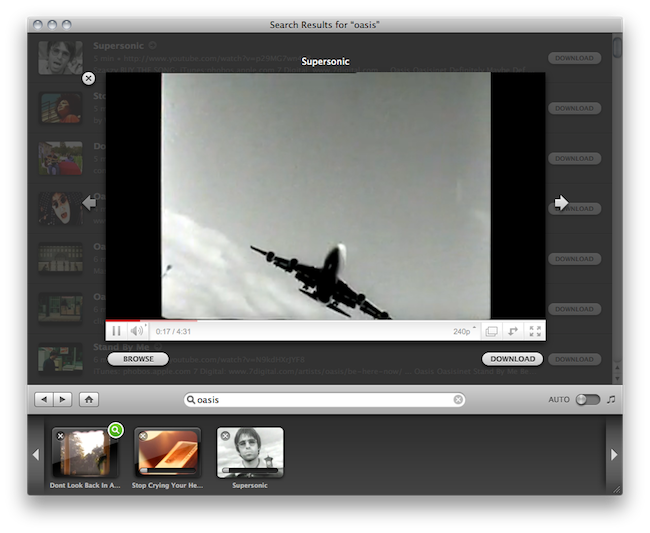 To download content, you have to search or enter a link to a webpage with media (music, video) then press Enter. If the media content is compatible with Grappler, it will be downloaded and saved to your computer. I have tested the app with Youtube and Vimeo and it works perfectly. I tried to download a song from MySpace’s music player and it didn’t work. Then I pasted a link to Engadget’s Nexus S review, Grappler opened the page in its built-in browser, started playing an embedded video and the download started just fine. Guess the developers just need to extend the app’s capability a little bit, but support for several media sources in this first version is impressive nonetheless.

Youtube’s integration is great, too – and it shows that the developers clearly created this with Youtube users and videos in mind. As you enter some keywords in the search bar, results will be fetched from Youtube. Once the results are in, you can either jump to the Youtube page using the browser or play the video in a popup by hitting the play button on the thumbnail. Even in a popup, Youtube’s controls are there and accessible. You can change from “original download” to “audio-only” at any time, and even start downloads without having to open a video.

In all, Grappler is a great new app for the Mac I’m liking a lot so far. Especially for videos and live footage I can’t find anywhere yet it’s available on the web, this neat utility has managed to fill up gigabytes on my iTunes library in a few days. I guess that’s exactly what the developers wanted.