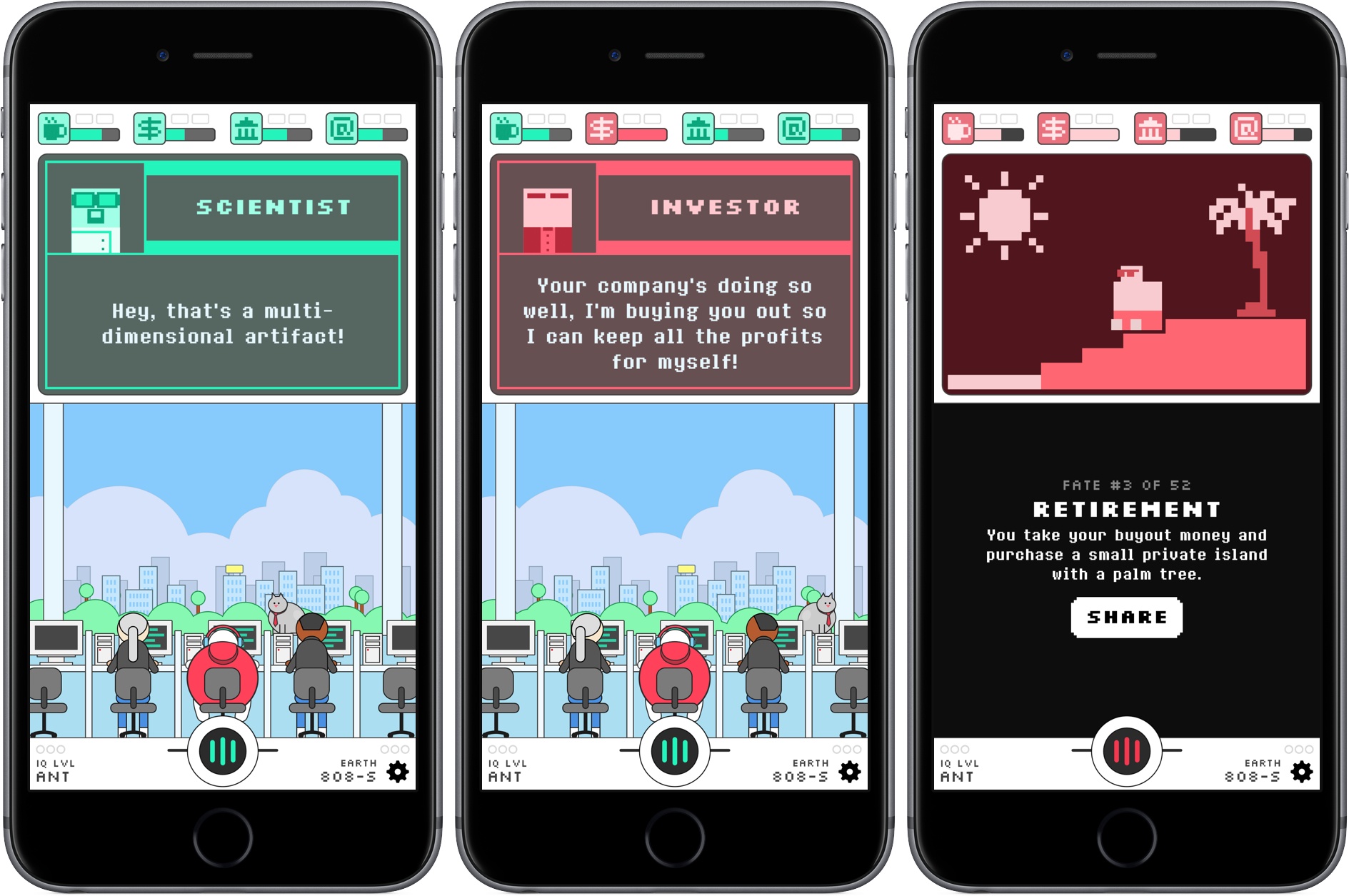 Brian Mueller’s CARROT series of apps serve up healthy doses of snark along with the weather, fitness, tasks, and alarms. It’s a style that is immediately recognizable and adds an element of humor and fun that give his apps personality. That unexpected game-like quality, combined with utility and productivity apps, is what makes Mueller’s apps stand out from the crowd. Watching the family of CARROT apps grow over the years, it’s not surprising at all that Mueller has taken what feels like the next logical step and made an iOS game. A.S.I. brings CARROT, the star in his apps, to life in a sprawling and fun sci-fi sendup of artificial intelligence and tech culture.

A.S.I. is the story of a Silicon Valley startup working to create the world’s first thinking machine. The journey begins at the end with CARROT destroying the world, then rewinds to the beginning dropping you into one of many multiverses to grow your startup and build your machine.

The game mechanics are reminiscent of one of my favorite iOS games of 2016, Reigns. A.S.I. presents you with a series of binary decisions. Like Reigns, you swipe left and right to make choices that have consequences. Indicators at the top of the screen keep tabs on the cumulative impact of your choices on things like money, employees, and the Internet. If you swipe without raising your finger, you can get an idea of the effect of your actions before you commit to one from red bars that appear above each variable. Failing to keep everything in balance ends your quest, though you can start over in a different parallel universe that’s slightly different from the last.

The worst fate of all.

As A.S.I. progresses, every choice involves tradeoffs as it becomes more and more difficult to balance every factor. Along the way, the game touches on a wide variety of artificial intelligence issues, including sentience, robot rights, the impact of supercomputers on the human workforce. Topics that could come across as dry and serious aren’t because they’re presented with the typical CARROT humor in an entertaining way that weaves them into the storyline without feeling pedantic.

This is a big game. There are 52 possible endings and thousands of individual choices that lead to them, which keeps each trip through a multiverse fresh. Along the way, nothing is sacred - startup culture, Silicon Valley, politics, and a whole lot more are all skewered. There are also collectibles that help you in your quest to improve your AI, some of which survive trips through different multiverses.

At its core, A.S.I. is an interactive text-based adventure. The setting is largely static, but the cast of characters that join you at the row of computers overlooking the decline of the city outside is interactive, and I found poking at them to get a reaction a fun diversion from answering questions. The game also features fun bleep and bloop sound effects that fit well with the supercomputer theme.

Text-based games are hard to get right. Too much text and they feel like a chore to read, and too little text takes away from the story being told. A.S.I. strikes a comfortable balance. The text is short enough to keep the story moving aided by its wry sense of humor. In addition, the simple swiping mechanic is excellent for a mobile game because it makes A.S.I. easy to pick up and put down as you move through the day, which is exactly how I’ve been playing the game for the past few weeks.

Text-based games aren’t for everyone, but if you’ve used any of the other CARROT apps and enjoyed their sass and snark, and especially if you’re a fan of games like Reigns, it’s a safe bet that you’ll like A.S.I. too. The story is fun and delivered with personality, which made me smile as I swiped back and forth through the story on my train rides in and out of Chicago.

A.S.I. is available on the App Store with a special launch price of $2.99.