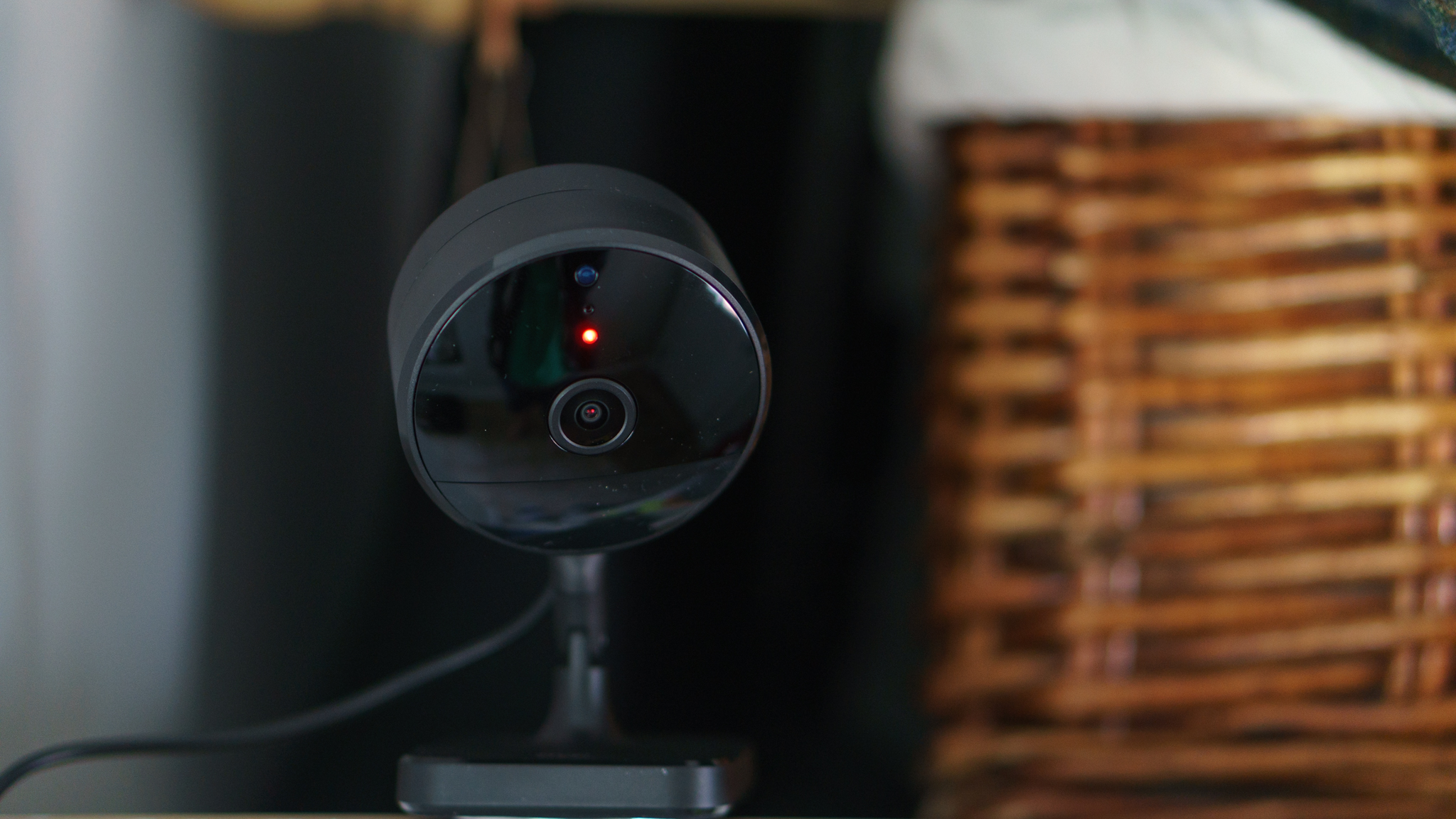 Last week I added a new camera to my HomeKit Secure Video setup: the Eve Cam. Announced at CES this year, what drew me to the camera was its slim profile and HomeKit Secure Video support. I’ve used other Eve home automation products in the past and had high hopes that the Eve Cam would be just as easy to install, and as reliable as the electrical outlets and door sensors I’ve tried. So far, I haven’t been disappointed.

The first home cameras I ever used were from Canary. The promise of outdoor wireless cameras that ran on batteries was enticing, but in practice, they didn’t work well. The batteries drained too quickly, and they had a habit of disconnecting from my WiFi network. I also had two of four cameras die within a year, which Canary replaced. Canary cameras aren’t HomeKit-compatible either, which I found frustrating when all of my other smart devices were accessible from the Home app.

So, last fall I began the process of replacing my Canary system piece by piece. The first two cameras I set up were Logitech’s Circle 2 cameras, which I installed outdoors. The cameras are primarily for security, but since the pandemic, the camera overlooking our front door has been a terrific way to monitor whether Amazon has delivered our groceries1 and keep an eye out for other packages too.

When I first heard about the Eve Cam, I was eager to try it. The indoor Canary cameras I’ve used, and even the Abode camera that I like, are large and somewhat conspicuous. In contrast, the Eve Cam is small and black with a low profile that helps it blend into its surroundings.

As soon as I unboxed the review unit that Eve sent me, I knew my hunch had been correct. The small, black Eve Cam virtually disappears on a bookshelf or other out-of-the-way spots. The camera’s small size also opens up more placement options than other cameras, and it rotates and tilts, making it easy to point in a direction that works in many contexts.

Another advantage of the Eve Cam is that it’s lightweight. The camera comes with a metal plate that the camera connects to with magnets. The plate can be screwed into the wall, but it doesn’t have to be. Instead, you can stick the metal plate to the wall or another surface with double-sided sticky foam. This makes it easy to attach the camera just about anywhere without drilling holes in anything, which is the option I chose.

I perched the Eve Cam on a high shelf near our back door, where I had a free electrical outlet. I pointed the camera down toward the door, plugged it in, then added it using the Eve app on my iPhone by scanning the QR code that came with the camera. This process was by far the easiest and fastest of any camera I’ve ever installed. 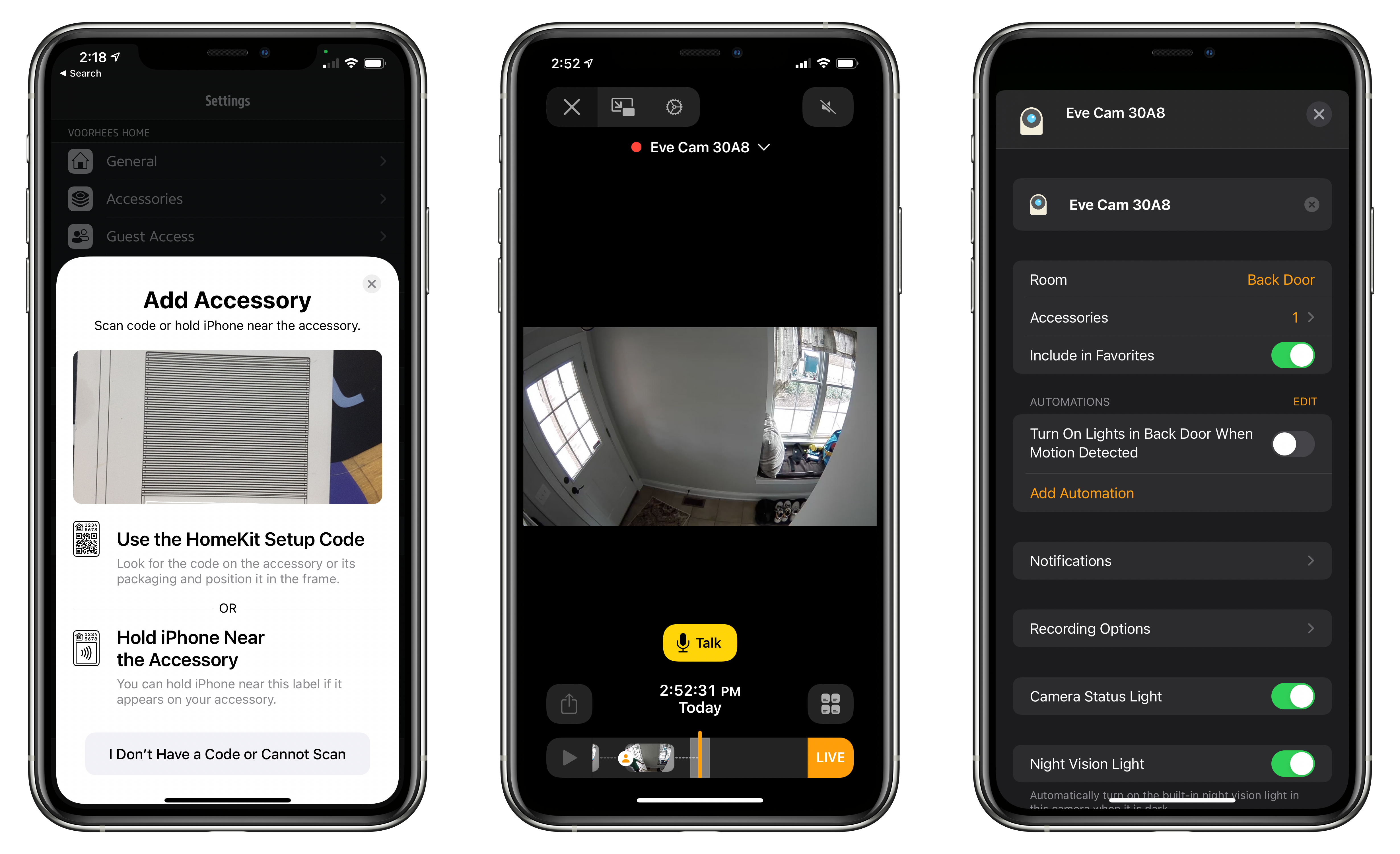 Setting up the Eve Cam.

The Eve Cam, which retails for $150, is an indoor-only camera, and it streams video in 1080p at 24fps over WiFi. The field of view is 150 degrees, which works well in tight spaces as I discovered in the tight quarters near my back door. The camera also has a microphone for monitoring audio, a speaker for communicating with someone nearby, and a motion sensor.

I’ve used the Eve Cam for less than a week, but I’ve already been impressed with its reliability. Other cameras I’ve tried have occasionally dropped off my network or become unresponsive for no apparent reason. So far, the Eve Cam has been rock-solid loading the live feed of my back door2 quickly every time and recording snippets of video when it detects a person. 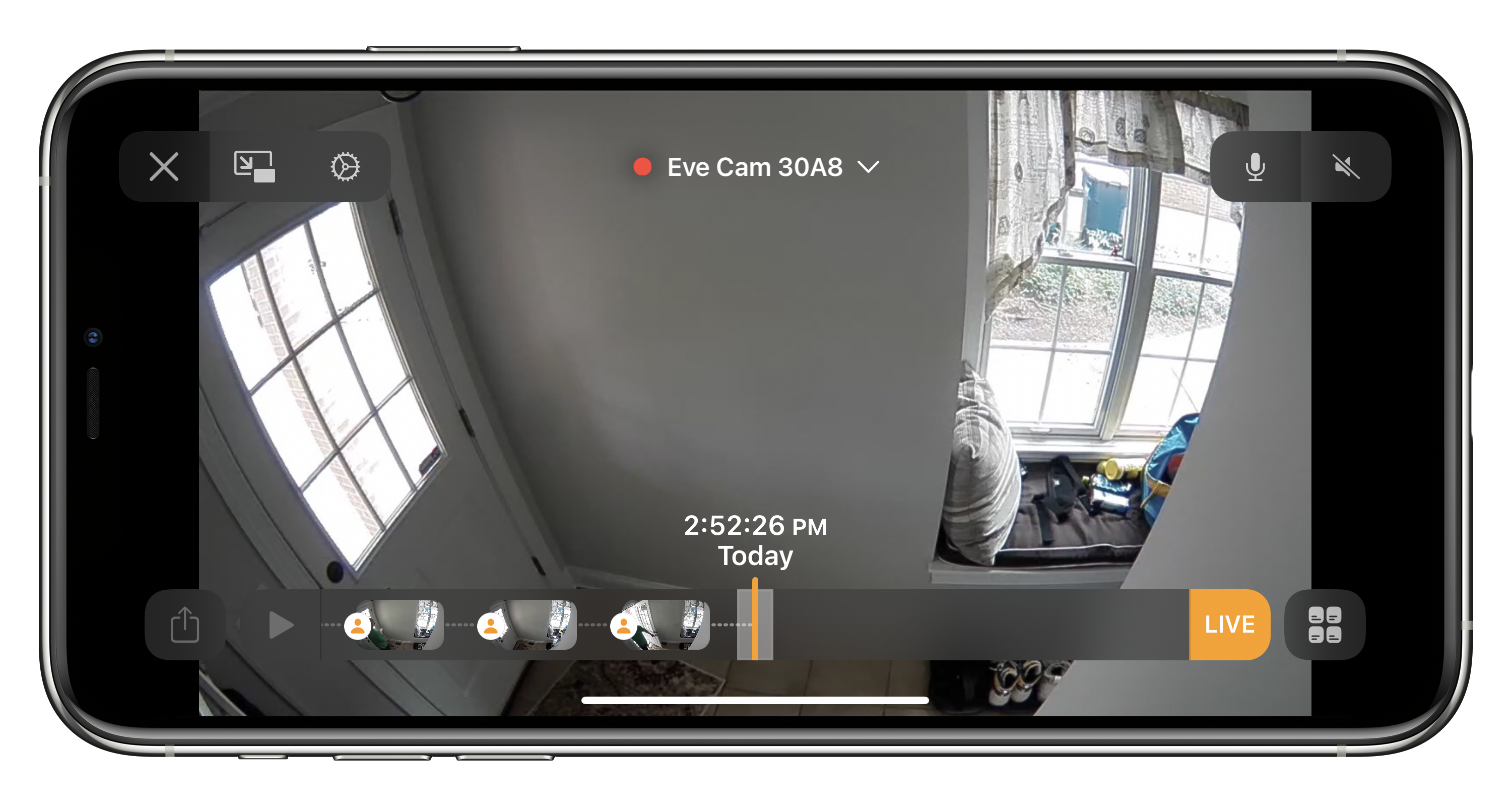 Eve doesn’t offer a service along with the Eve Cam. As a result, if you’re looking for a security solution that includes off-site monitoring of your home, it’s not your best option. However, the benefit of Eve’s approach for someone like me is that the Eve Cam fits into my existing setup, allowing me to mix and match the camera with my other devices, access everything from the Home app, and set up automations that leverage other HomeKit devices I own.

This fall when iOS and iPadOS 14 are released, you’ll gain the ability to exclude motion in certain zones of a camera’s field of vision from recording. When the OSes are updated, you’ll also be able to set up alerts based on face detection, which all occurs locally after you’ve tagged faces in Photos or the Home app.

In some respects, the most remarkable thing about the Eve Cam is that it just works. Early home security cameras were often unreliable, only worked with sub-par apps, and were difficult to set up. The market seems to have matured substantially in the last year or so, and the addition of Apple’s HomeKit Secure Video specification has brought a secure, interoperable way to set up a security system using hardware from multiple companies. If you’re looking for an indoor home security camera that works with HomeKit Secure Video, the Eve Cam is an excellent choice.